I left my drunk friends behind: Sobriety made me turn a terrifying new page

It was time for the partying and drugs to stop. It was the right decision -- but cost me everything I knew 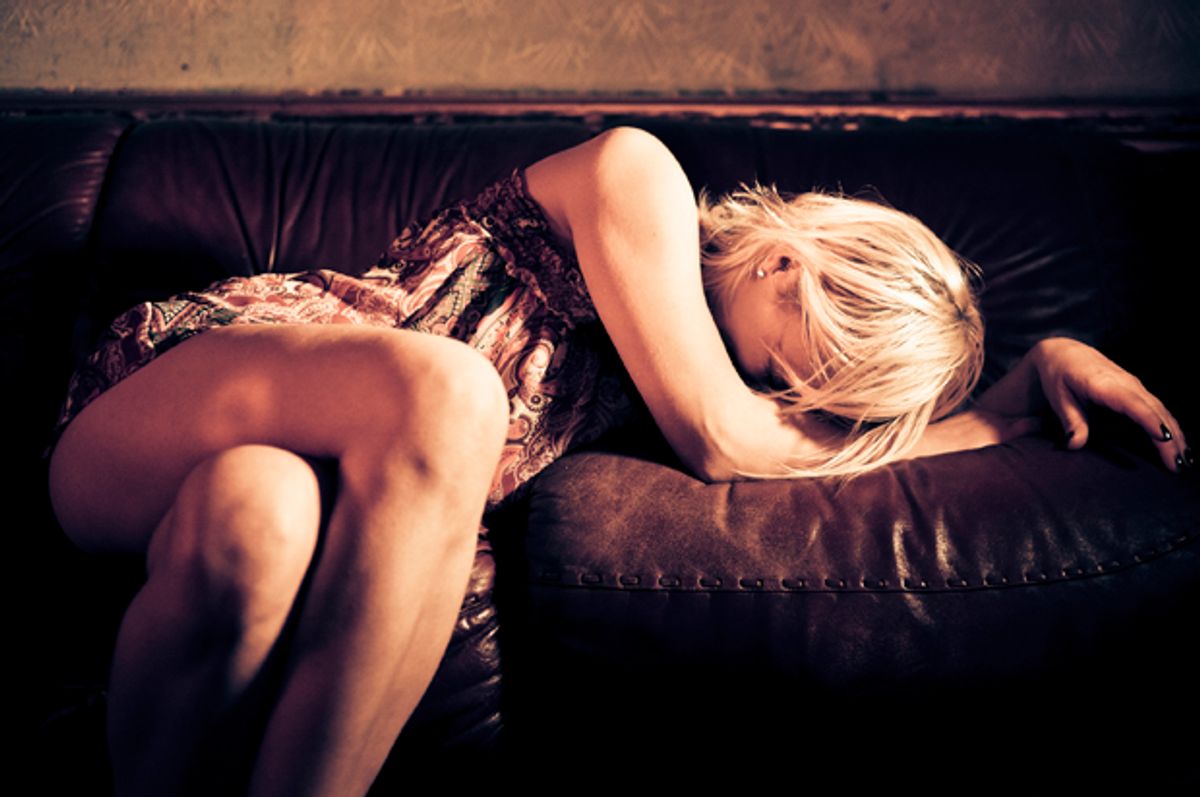 When I walked back into the house, I was in shock. It had been a month and a half since I had crossed through the threshold into the historic home that housed the ragtag group of people who had once been considered closer than family.

The living room looked nothing like the hazy recollection of nights and early mornings I had in my head. The couch that had felt like a throne sat sagging and filthy against the wall.

Cigarette ash was piled around the arms of the sofa. I glanced up the stairs, but was distracted by the dried dark brown handprints that were smudged and trailing the walls up the once grand staircase.

I know they weren't mine. But they were a grim reminder of what had happened behind my bedroom door at the top of the stairs.

In the next room, I found a couple who had been my good friends watching "Judge Judy" and smoking from my hookah.

"Is everyone still asleep?" I asked, but I was met with blank stares. It took them a few minutes, trying to focus on me to realize who I was.

"You came back?" asked the dazed man, Joe. His scruffy beard looked more ragged than I remembered. My eyes wandered to his exposed arms. The marks looked familiar, but the vastness of the bruises were a sad reminder of where I could have easily ended up.

In between taking hits from the hookah and the nearby pipe of opium, Joe told me about the raid on the house. I had left right before. And most everyone thought I was somehow involved, since the timing worked out so well for me. He gave me an odd look, then ask, "Did you do this to us?"

I didn't know what to say, so I walked away. Maybe it was better to be thought of as a narc than to admit what had really happened. I walked out, leaving a quick note that I was donating everything in my room back to the house -- the mini-fridge, the computer, the couch, the clothes, everything. I never went upstairs.

This wasn't my home anymore.

More than a year later, I had a high-stress job and needed a break. A trip back to the city that could always loosen me up was exactly what I thought I needed. I had gone from hippie in homemade skirts to yuppie in pearls over that year. I didn't drink and I hadn't had drugs in quite a while. Cigarettes were the only vice I had left. But, I thought, I was still me.

I arranged to stay with friends and headed out for the weekend. My first stop was at a party at the old house. My last memory of the place had faded, and I was only left with the good times I had while stoned or drunk. I had all but forgotten my awkward final visit.

I walked into the party at full swing. As I passed the people who had once been considered family, I smiled and waved -- but everyone reacted coldly. Their eyes would immediately find the ground and as I tried to make conversation, they would quickly drift away, saying they needed another drink.

Within the first hour, I was near tears. I headed to my old hiding spot to clear my head. I climbed up the fire escape and pulled myself up over the edge of the roof. Sitting up there and looking up the stars always used to calm me. But now, all I felt was terror. I sat on the roof crying as I tried to figure out what had happened to me.

From my perch, I spotted Joe leaning against a fence. Despite the heat, he wore a thick long-sleeve shirt, and his once robust figure had grown frail. His eyes stared blankly into the crowd. His cheeks looked hollow even from that distance.

I didn't realize how much I had changed. I felt I was doing something wrong. What had I done to lose the people who cared about me? Maybe they had never cared about "me" at all; maybe they only liked having another person to buy drugs from and split handles of vodka with. They wanted someone like them, and that just wasn't me anymore.

At that moment, when I knew there was nothing left for me, three guys crawled over the edge of the roof. They were complaining bitterly about all the stoners stumbling around. They had climbed up there to look around the neighborhood to remember where they parked their car.

As two of them argued back and forth, the third -- Adam -- came to sit next to me. And somehow, within minutes, everything seemed better. I wasn't as broken as I thought. I wasn't a leper to everyone. And maybe, just maybe, things were going to work out for the better.