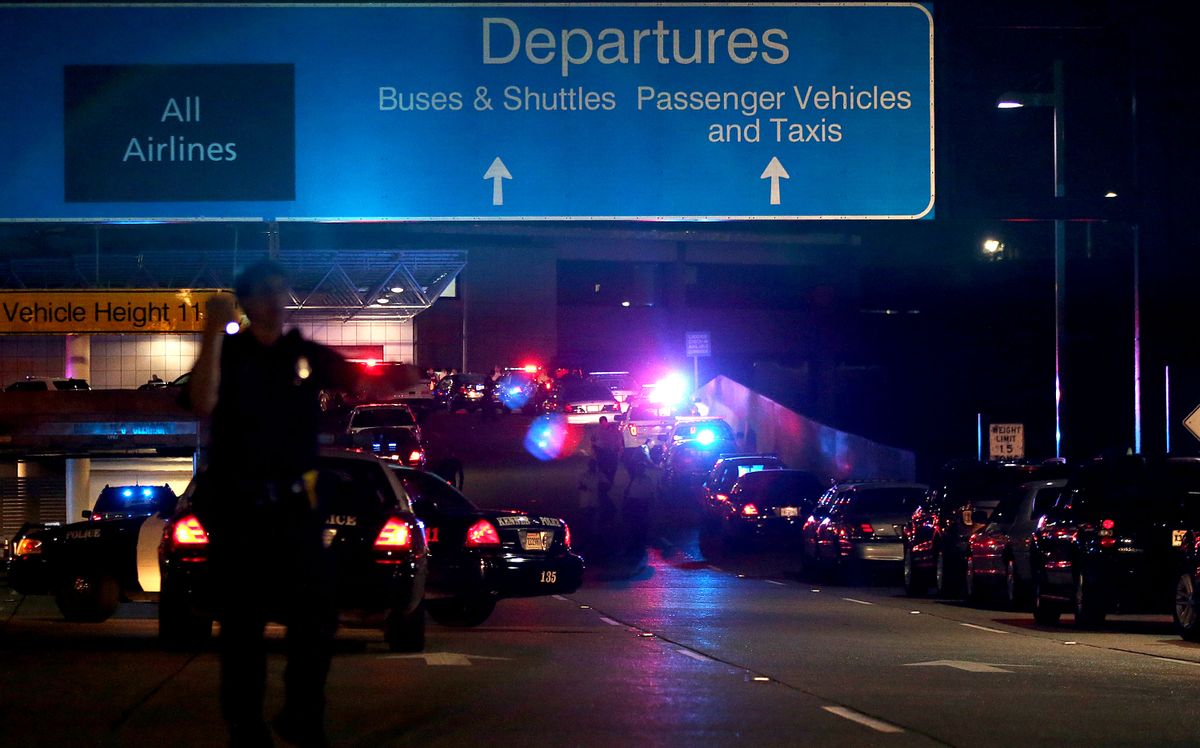 The ramp to departures is seen blocked off by emergency vehicles at the New Orleans International Airport, Friday, March 20, 2015, in Kenner, La. Richard White sprayed a TSA agent in the face with wasp killer then slashed a second guard with a machete before a third agent shot him three times at a security checkpoint in the New Orleans international airport Friday. (AP Photos/Jonathan Bachman) (AP)
--

KENNER, La. (AP) — Authorities say the machete-wielding man who was shot at New Orleans' international airport after trying to attack passengers and security agents was carrying explosives at the time.

There was also a barbeque lighter and a letter opener in the bag, Normand said at a news conference at the Louis Armstrong New Orleans International Airport. Residue from smoke bombs was also found near White's body. White had dropped the bag during the melee.

Normand says White is hospitalized with gunshot wounds and is currently "unconscious."

The sheriff said White has a history of mental health problems but investigators were trying to determine the nature and extent of those problems. His family has been cooperating with the investigation.

The suspect, 63, is a Jehovah's Witness and has refused "certain types of medical care," Normand said.

Authorities also found smoke bombs and tanks of acetylene, Freon and oxygen in the trunk of his car, Normand said, but investigators didn't know what, if anything, White intended to do with the materials. Normand said White is believed to be a former taxi driver, but added that investigators are still examining a variety of sources and databases to obtain his employment and criminal history.

Normand said White sprayed the unarmed Transportation Security Administration agents and several passengers in line at the checkpoint with wasp killer. He then drew a large machete from the waistband of his pants. A male TSA agent blocked the machete with a piece of luggage as White ran through a metal detector.

White chased TSA agent Carroll Richel while swinging the machete. They were heading toward Lt. Heather Slyve of the Jefferson Parish Sheriff's Office, who drew her weapon and fired three times as White quickly gained ground on Richel, Normand said.

One bullet is believed to have gone through Richel's right upper arm and hit White. Richel credited Slyve with saving her life.

New Orleans Mayor Mitch Landrieu said a review of security procedures will follow, adding that such is standard after any emergency.

Normand, Landrieu and TSA Acting Administrator Mel Carraway addressed reporters during a news conference at the airport, which is owned by the city of New Orleans but located in the city of Kenner in neighboring Jefferson Parish. They praised the work of TSA officials who helped usher passengers away from the unfolding danger, as well as the law enforcement officials providing security.

Normand said the situation could have been much worse.

"You know, sometimes, the saying: You'd rather be lucky than good. I think we were both last night to the nth degree," Normand said. "I think we did a lot of things right and positive and caused certain things to happen, but by the same token — one second here, one second there — it could have been a much different outcome."