Listen up, frat boys: You are not Jon Stewart

Just kidding! It's the defense of every idiot frat dude and insane right-wing pundit. Trouble is, you're not funny 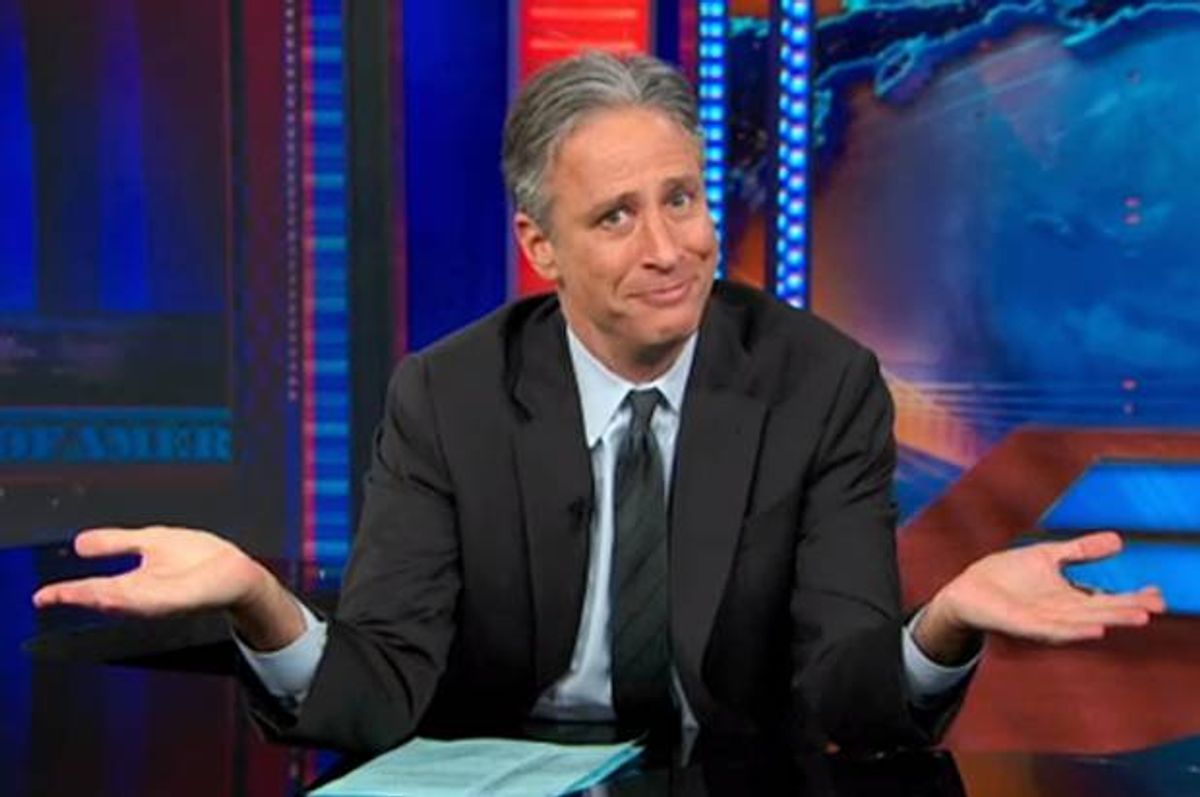 Last week we got more news of horrible frat behavior coming on the heels of the Oklahoma fraternity scandal.  This time it came in the form of a Penn State frat -- Kappa Delta Rho -- that allegedly operated two closed Facebook pages where members posted pictures of nude, unconscious women, drug deals, and hazing.  A former member informed police about the pages and, according to the warrant, members posted comments that suggested they were well aware that the photos crossed the line.

Not only were the frat members mindful of the fact that the pictures were incriminating, they were relentless in desiring to post them.   The first site, which they aptly named “Covert Business Transactions,” was shut down after a victim reportedly "observed a photograph of her topless which was posted to the group" and then "threatened the fraternity."  Apparently the frat waited a bit and opened up a new site—this one subtly called “2.0.”

According to police, "Some of the postings were of nude females that appeared to be passed out and nude or in other sexual or embarrassing positions. It appears from the photos provided that the individuals in the photos are not aware that the photos had been taken."  The closed Facebook page had 144 members, including current and past students, according to the warrant.

Once the news broke, public scrutiny quickly turned to the misogyny of most frat culture, the rights of the victims, and the question of whether Greek culture can ever be more than an excuse for debauchery and bad—even criminal-- behavior.  Critics of Kappa Delta Rho asked why college campuses continue to allow such aggressively sexist behavior to be connected to institutions of higher learning.  Women’s rights groups called for change.

How did the frat respond? Did they apologize?  Did they recognize that they had behaved like jerks, or even criminals?  No. In fact, they laughed the whole thing off as just a satirical joke.  Or at least that is what one anonymous member did when he spoke to Philly Mag about the scandal.

First he explained that what happened was no big deal and that, in fact, everyone does it.  Turns out, though, that claiming that everyone is a sexist asshole doesn’t make you less of one. But then he frosted the cake by saying it wasn’t just a no-big-deal part of everyday culture; it was satire: “It was a satirical group. It wasn't malicious whatsoever. It wasn't intended to hurt anyone. It wasn't intended to demean anyone. It was an entirely satirical group and it was funny to some extent.”

Dropping the “satire” bomb immediately put this scandal into a larger context, one we have seen building steam for some time now, where outrageous comments and behavior are justified by saying that they are just satire.

The humor defense—I was just kidding around—has a long tradition of acting as the excuse for outrageous behavior.  But it would be fair to say that we are seeing it used more often today. Recall, for instance, the way that presidential candidate Herman Cain tried to laugh off his comment that a key part of his immigration policy would be building an electrified fence on the border.  When he was criticized for that comment he told David Gregory during an appearance on NBC's "Meet the Press," "That's a joke. That's not a serious plan. I've also said America needs to get a sense of humor."

The point is that Cain tried to explain his idiotic plan as a joke, but not as satire.  It’s offensive enough to try to backpedal out of dumb, hate speech by crying “just a joke,” but it’s even worse to call it satire.

Satire is a special form of humor—one that depends on irony and layers of meaning—and it typically is understood as a form of humor best aimed at the powerful. The motto with satire is “punch up, not down.” Satire is also considered to be the highest form of humor since it requires more sophisticated critical thinking.  As we have seen in the political satire of Jon Stewart, Stephen Colbert, Jessica Williams and John Oliver, it is also understood as humor aimed at encouraging the audience to question accepted truths and challenge the status quo.

But for those that don’t ”get” satire—as clearly our exemplary frat informant proves—it is often easily confused with just outright mockery and derision.  The confusion happens because both satire and mockery practice ridicule and contempt.  The difference is that satire uses humor to condemn the powerful but not to mock the weak.

The frat boy might have tried to pass off the Facebook site as satire—but there is no satirical irony in the sort of images the warrant describes, there is no complex metaphor or figurative meaning; instead there is only humiliation. Such humor is meant to degrade an already vulnerable and less powerful group.  In this case it is clearly misogynist and potentially criminal.  It really isn’t funny. It’s abusive and mean.

This is why the cry that the frat’s Facebook site was just satire is an even greater outrage than if we had heard that the site was just an opportunity for the boys to visually abuse the women they photographed unconscious.  According to the interviewee it was not abusive; it was ridicule.  But in this case ridicule means the use of humor to further demean the women pictured, since that is the only way we can understand making fun of the vulnerable. Clearly it wasn’t women looking at the site and having a laugh.  This was a site created by men for men with pictures of naked, unconscious, sexualized women on it.  If the site was created in jest—the only sort of jest here is misogynist mockery.

Backing out of abusive behavior by claiming satire really doesn’t let you off the hook. It actually skewers you more.

And yet, satire is increasingly offered as a defense of aggressive, demeaning behavior.  We’ve seen the satire defense used not just in the scandal over rape jokes, but also on a regular basis with the hate speech of Rush Limbaugh.  Even Sarah Palin defended Limbaugh when he called liberal groups “fucking retards” on his show. “Rush Limbaugh was using satire,” Palin claimed.  That ridiculous comment led Stephen Colbert to school Palin on what satire actually means.

It seems likely that the satire defense is cropping up more and more in attempts to deflect public outcry for outrageous behavior because uncivil, aggressive, and discriminatory speech is so commonplace today. We can thank pundits like Limbaugh and Bill O’Reilly, and channels like Fox News for ramping up the name-calling, belligerent, and disrespectful nature of public discourse.  But these mainstream outlets have been copycatted by the public at large.  In addition to our infamous Penn State frat, Facebook pages like “I Hate Teen Moms” or Twitter hashtags like #itaintrape often get defended by those saying they are just jokes.  Examples abound.

As a professor at Penn State, I could make the joke that clearly our education isn’t working if our students have such a dim definition of satire. As satisfying as it would be to make the frat interviewee the butt of the joke, it is important not to miss the larger point.  We need to remind Kappa Delta Rho –and those that think like them—that hate speech, abuse, and prejudice are not satire.  We have to insist that laughing at groups you hold to be inferior doesn't make your attitudes acceptable. When you inflect humor into demeaning depictions of others, you are adding a whole new layer of outrage to an already outrageous situation.