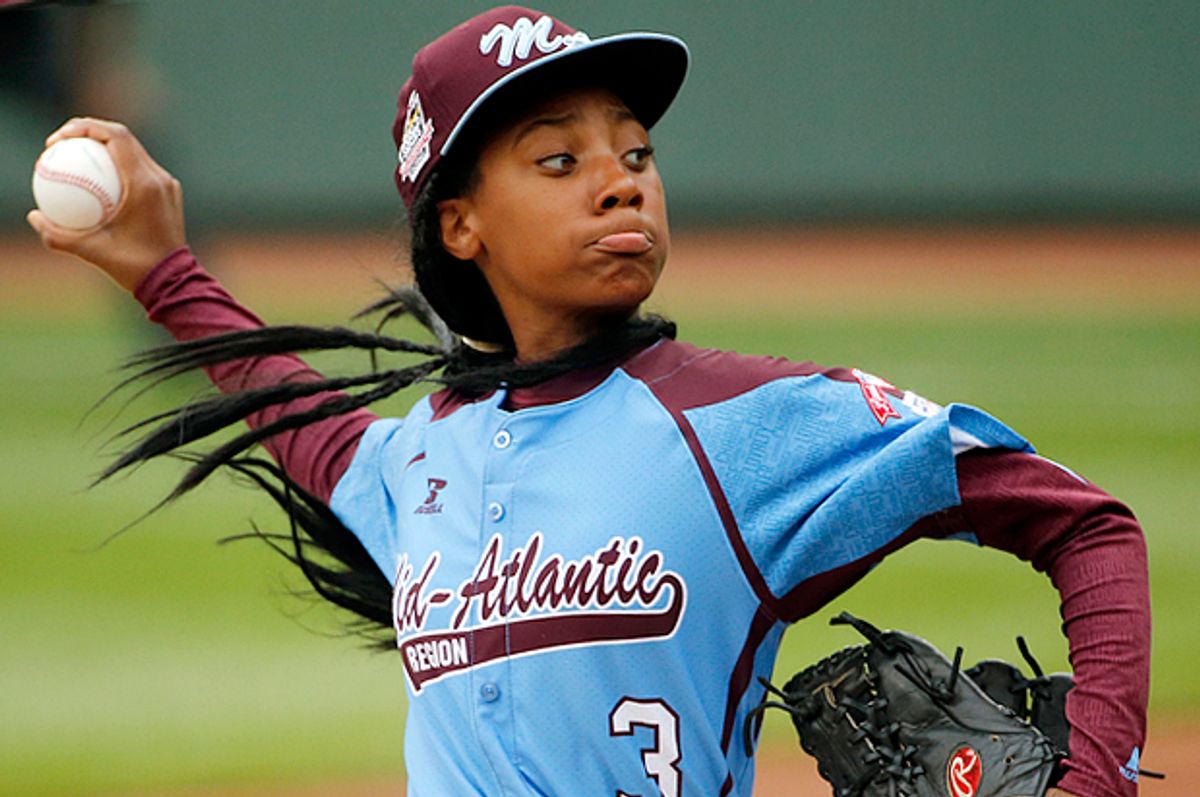 Adeptly proving that being a good sport is about so much more than how you perform on the field, Mo'ne Davis has asked Bloomsburg University to reinstate a player who denigrated the teenage baseball star on Twitter.

Davis has attained a unique degree of acclaim for a female athlete – an unprecedented one for a female baseball player. Last summer, she caught the attention of the world for her outstanding performance during the Little League World series, and her subsequent groundbreaking appearance on the cover of Sports Illustrated. Last week, she released her memoir.

But hey, you can't be young, female, African-American and accomplished and not expect to attract your share of trolls. In August, at the height of her World Series triumph, she found herself on the receiving of Twitter bashing from users calling a 13 year-old "kinda trash" and asking, "The real question is can she cook?" And over the past weekend, the provoked the ire of Bloomsburg University baseball player Joey Casselberry, who tweeted about the news Davis was going to be the subject of an upcoming cable movie that "Disney is making a movie about Mo’ne Davis? WHAT A JOKE. That slut got rocked by Nevada."

The consequences for the first baseman were swift and severe, as his tweet quickly brought a heap of attention to Davis' fellow Pennsylvanian. Before deactivating his account, Casselberry posted Saturday that this had been "An example that one stupid tweet can ruin someone’s life and I couldn’t be more sorry about my actions last night. I please ask you to…. Forgive me and truly understand that I am in no way shape or form a sexist and I am a huge fan of Mo'ne. She was quite an inspiration." Was the motivation pure contrition? Or did it have something to do with the school's subsequent announcement that "Bloomsburg Univ is deeply saddened by what was written about #MoneDavis by one of our student-athletes. His words do not represent us…. We take matter very seriously; addressed the issue with the student-athlete (who has been dismissed from team), coach, and the team"?

In the court of public opinion, the responses have been neatly split between those who think the punishment was "ridiculous, for calling someone a name," and those who feel just fine about it. Speaking on "SportsCenter" Monday, Davis herself weighed in, explaining that she had sent an email to Casselberry's school asking for his reinstatement and saying, "Everyone makes mistakes. Everyone deserves a second chance. I know he didn't mean it in that type of way. I know a lot of people get tired of seeing me on TV, but sometimes you've got to think about what you're doing before you actually do it. I know right now he's really hurt, and I know how hard he worked just to get to where he is right now. I was pretty hurt on my part, but I know he's hurt. He's hurt even more."

One could argue that the world of competitive sports is rough and that smack talk is part of the game – a game that Casselberry, a player Philly.com reports "broke almost every offensive record at Methacton High School, earning All-Southeast Pennsylvania honors," knows intimately and no doubt loves. What he failed on Friday to grasp is that he wasn't expressing a negative opinion about a peer player – he was calling a young teenage girl of another race a "slut." He wasn't criticizing her performance as an athlete, he was insulting her as a female. That's why that's not okay, and that's why anybody who justifies Casselberry's words as, well, that's just sports is being willfully ignorant of context.

But that's also why Davis' gesture is so meaningful. She clearly gets that it was a lazy, flippant insult, and that you really do need to think before you run off at the mouth. She also understands, player to player, that this is someone whose professional future may now hinge not on his skill but his insensitivity. And she forgives him. Amazing. I wish more adults had her class and her compassion.

The toxic climate of social media does not often trade in mercy. It thrives on public shaming and bullying and piling on. Don't think for a moment that Casselberry didn't know full well he'd have to delete his Twitter account after his shenanigans; don't think he didn't know he was in for a heap of abuse – and I'd wager some pretty horrific threats -- himself. Because that's the perverted way online justice works. Heap rage upon rage, insult upon insult. But there's no incentive for people to learn and do better unless they're given room to do so, unless they're given a little mercy. And whatever you think of Bloomsburg University's decision – so far, the school says it is "standing firm" on it -- it should be clear that Davis, with her gracious and compassionate response, has proven herself once again a shining star.