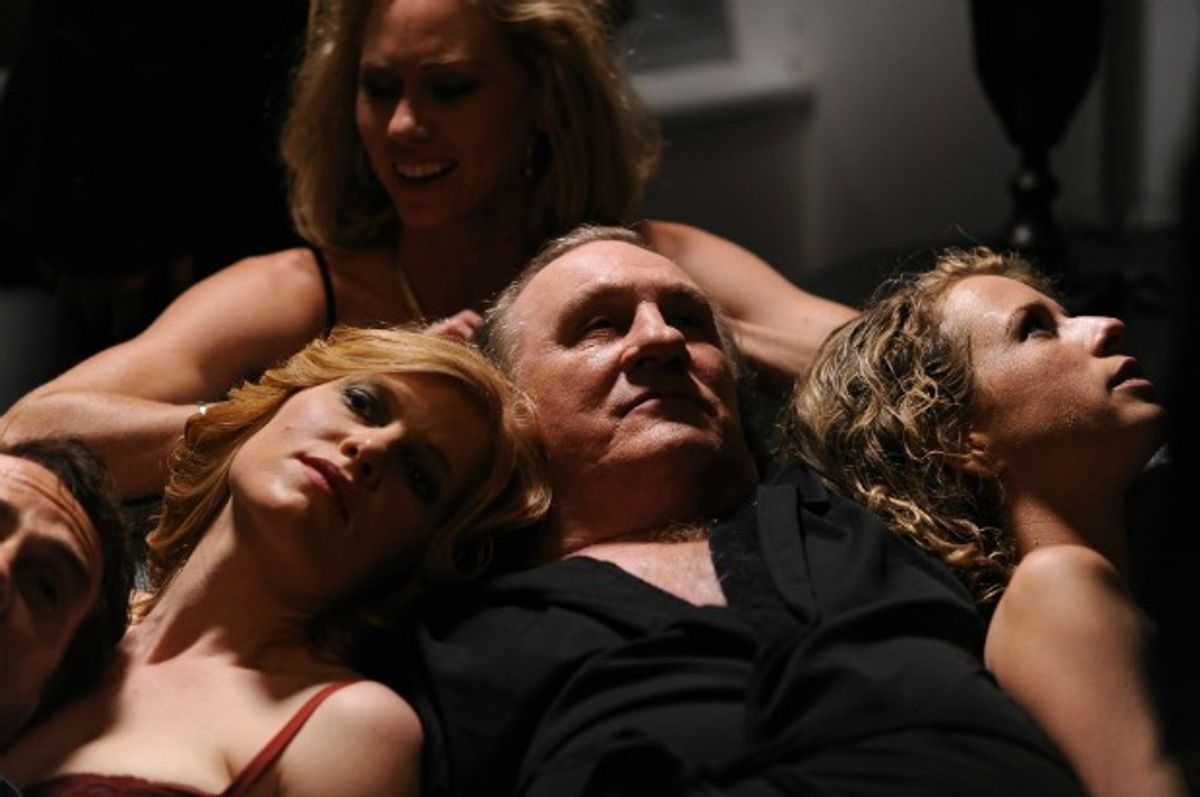 On May 14, 2011, superstar French economist Dominique Strauss-Kahn, who was then the managing director of the International Monetary Fund, was hauled off an Air France flight at JFK Airport and arrested for the sexual assault of a hotel maid in Manhattan earlier that day. As we see in Abel Ferrara’s lurid but compelling “Welcome to New York,” in which the enormous and frequently naked Gérard Depardieu plays a barely concealed fictional version of Strauss-Kahn, he was lured from the plane by the promise that New York cops had found his lost BlackBerry. He evidently had no idea anything was wrong, or that he might be in trouble.

There were so many dimensions to “l’affaire DSK,” as the French media immediately dubbed it, that no dramatic interpretation could possibly capture them all. I haven’t seen the original cut of “Welcome to New York” that premiered at Cannes last year – and I’m certainly curious. (Hint, hint.) Ferrara, the veteran indie director best known for the early-‘90s crime dramas “Bad Lieutenant” and “King of New York,” apparently isn’t happy with the cuts made by the film's global distributor, Wild Bunch, in order to avoid the worldwide equivalent of an NC-17 rating. But Ferrara's belief that the release version lets the DSK character off the hook for the alleged hotel rape, or depicts him as a victim of NYPD harassment or American sexual hysteria, doesn’t square with the film I watched last night.[ In the first version of this story, I wrote that IFC, the film's North American distributor, was involved in making these cuts. An IFC spokesman says the company had "no role whatsoever in the editing process."]

In any version of the story, Ferrara isn’t much interested in the political dimensions of the story, and whatever his pro-feminist intentions may be, his take on gender relations will no doubt strike some viewers as antediluvian. But he gives the most famous living French actor, himself no stranger to Rabelaisian excess, free rein to build a character study of the notorious banker that is alternately sympathetic and scathing – and then he pairs Depardieu with the formidable Jacqueline Bisset, as his rich and ambitious celebrity wife. (The film’s characters are called Devereaux and Simone, but no serious effort is made to conceal their sources.)

As far as I can tell, these two screen legends of the ‘70s and ‘80s have never worked together before, and for all the awkward, DIY postmodernism of Ferrara’s low-budget style, Bisset and Depardieu’s combustible scenes together are worth the price of admission by themselves. (We begin with a scene of Depardieu discussing the role with journalists, and end with him breaking character and staring directly into the camera.) I don’t know whether the dialogue of “Welcome to New York” is literally improvised or just feels that way, but you get the impression that Depardieu and Bisset are working their way through episodes that are just about to hit maximum intensity in another take or two. But if you’re willing to suspend your normal expectations just a little, the shaggy, acting-school flavor yields considerable insight into how this kind of disordered elite marriage actually functions. Simone loves Devereaux, even as she despises his contemptible behavior and feels betrayed by his destruction of their dreams of political conquest; Devereaux is a disappointed idealist, who feels connected to his youthful humanitarian passions only through his sex addiction.

Ferrara is a native New Yorker who has lived in Europe for 20 years or more, and without any specific highfalutin intentions his movie gets at some of the underlying issues of morality, masculinity and sexuality that made this case a watershed moment in Franco-American cultural relations. I happened to be covering the Cannes Film Festival during the week of the Strauss-Kahn arrest, where it takes a really big outside news story to penetrate the bubble of film industry self-regard. At least for French people, this was that kind of story. Jaded cinephiles stood three-deep around TV sets in the Palais des Festivals, as every French network went wall-to-wall with live coverage: We saw DSK’s arraignment and “perp walk” (a ritual previously unknown and in fact illegal in France); we watched Anne Sinclair, his New York-born wife and heir to the fortune of legendary art dealer Paul Rosenberg, arrive at JFK to stand by her man; we heard commentators dissect every detail of the charges, the background of the accuser, an African immigrant, and the possible ramifications for French politics and international finance.

Outside the Northeast Corridor financial and political elite, almost nobody in America had heard of Strauss-Kahn before his arrest. In France he was a towering figure, widely loved and almost as widely despised, who blended the political sizzle (and colorful reputation) of Bill Clinton with the intellectual heft of Paul Krugman. Until the Manhattan debacle, Strauss-Kahn was seen as the leader of the Socialist Party’s moderate wing and its front-running contender in the 2012 presidential election. His longtime intra-party rival François Hollande, who became the Socialist standard-bearer and went on to win that election, quite likely owes his current digs in the Élysée Palace to whatever happened in the Sofitel on West 44th Street.

Strauss-Kahn had been surrounded by rumors of lechery and excess throughout his career – one French newspaper described him as “un grand séducteur,” years before the New York incident – but such things undeniably carry a different resonance in French public life. Or at least they did. On that side of the Atlantic, many people saw the DSK case as further evidence of America’s repressive and puritanical sexual mores (and suspected that Strauss-Kahn had been set up by his political opponents). On this side, many American feminists saw the French response as symptomatic of a culture that was too quick to ignore not just philandering and adultery but also coercion and sexual violence.

Although “Welcome to New York” isn’t about the international media circus or the public debate that followed Strauss-Kahn’s arrest – we only see those things as Devereaux and Simone encounter them – it does brush past a central point along the way. Both those responses are valid, at least up to a point, and both nations are hypocritical about sex, each in its own distinctive fashion. Sometimes American feminism does become the ally of old-school sexual repression, but not so much in this case. And the French pose of adult sophistication has often allowed powerful men to get away with damn near anything – former President François Mitterrand didn’t even try to keep his longtime mistress a secret – but the global humiliation of the DSK case has provoked extensive national debate and soul-searching about exactly these questions.

In any case, those generalizations don’t tell us much about the specific tragedy of the Strauss-Kahn case. He was an international banker genuinely committed to using the big institutions of global finance for democratic and egalitarian ends, and because of his power and charisma and good intentions his odious private behavior was ignored or excused. As Depardieu plays Devereaux, he’s a tormented and lonely man-child, utterly consumed by his compulsion. He asks his own daughter about the details of her sex life over lunch with her and her new boyfriend, and he assaults or coerces or seduces the maid (depending on whose version of the story you believe) after a sleepless night spent with multiple sets of prostitutes. (Strauss-Kahn has threatened to sue Ferrara for slander because of this depiction, but given the numerous allegations, rumors and civil suits that have swirled around him over the last four years, he’ll have a tough time proving that any of this is knowingly false.)

One obvious absence in “Welcome to New York” is the character of the maid herself, who plays very little role in this telling, and whose testimony in the real-life DSK case was ultimately deemed unreliable by prosecutors, leading to the ultimate dismissal of all charges. For better or worse, this movie is an interpretation of Strauss-Kahn as a specific grade of powerful and entitled man, not an examination of what did or didn’t happen in that hotel room on 44th Street. Unlike the trans-Atlantic media that picked apart the maid’s personal history for weeks, Ferrara never questions her motives or suggests that she was untruthful in any significant way.

Although Strauss-Kahn has always maintained that his accuser, a Guinean immigrant named Nafissatou Diallo, was not being truthful, he later settled her civil suit for a reported $1.5 million. His murky public remarks -- Diallo is lying about the precise nature of their encounter, but his own behavior represented a “moral failure” he would regret for the rest of his life – become the basis in Ferrara’s film for a moment of damning black-comic clarity between Depardieu and Bisset. How strongly Devereaux resembles the real DSK I couldn’t say, but he makes Bill Clinton’s Jesuitical discourse about “the meaning of is” look like old-fashioned chivalry. He’s like some depraved old priest in a novel by the Marquis de Sade, arguing the fine points of pornographic detail that will prove his inner nobility of spirit.

”Welcome to New York” opens this week in Los Angeles, with other cities to follow. It’s also available nationwide via VOD from cable, satellite and online providers.