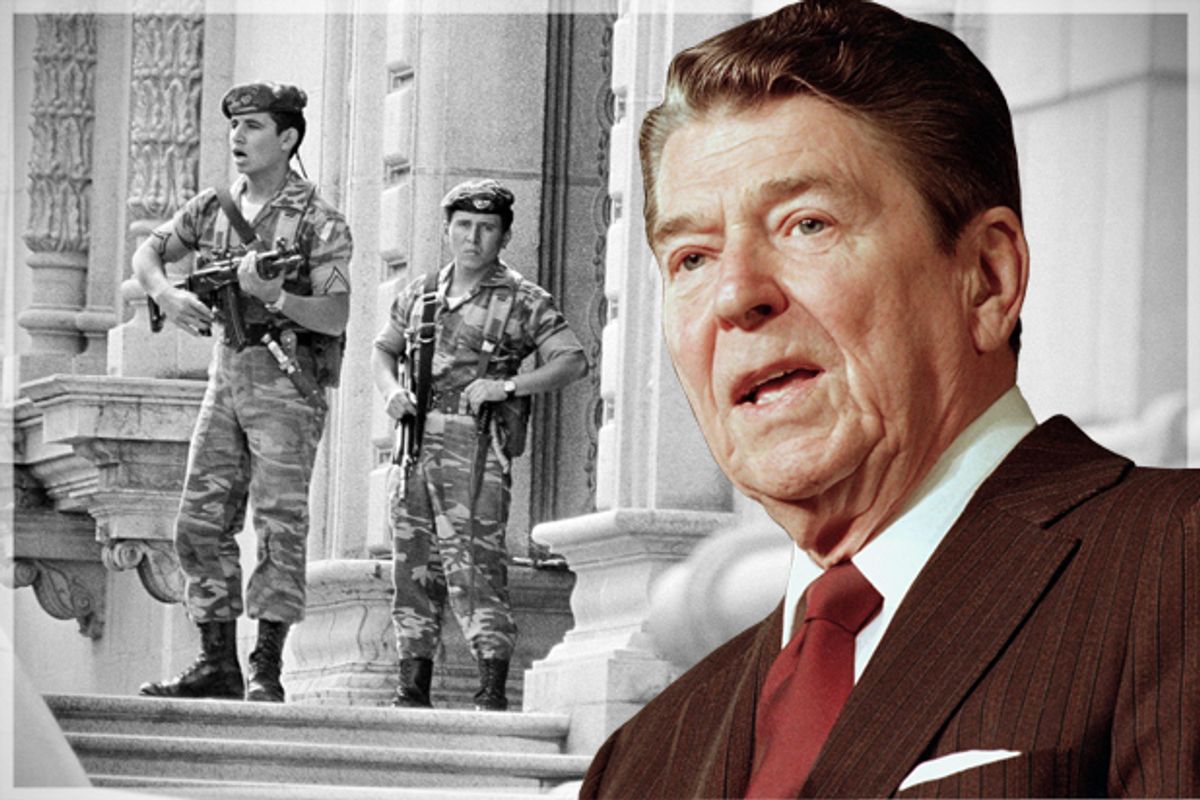 On Jan. 5 of this year, the Associated Press issued two short reports on a trial against aging former Guatemalan dictator Efraín Ríos Montt that by and large went unnoticed in the United States.  The first announced that the genocide trial, suspended in 2013, would finally resume.  The second, hours later, updated the story by informing readers of a delay along the lines of what happened in 2013, preventing one of the world’s most notorious living war criminals from facing justice.

In the early 1980s, Ríos Montt presided over the most ruthless and violent military regime of the Guatemalan Civil War.  This distinction is no small feat, given the brevity of his time in office (16 months) and the competition—namely, the succession of tyrants who led the military government in the aftermath of the 1954 CIA coup which removed Jacobo Arbenz from power at the behest of the United Fruit Company.  Of the roughly 200,000 deaths that occurred during the war, researchers estimate that 86,000 took place during Ríos Montt’s savage counterinsurgency campaign in the Maya majority Altiplano of Guatemala.

Lost in the short AP reports issued earlier this month is the fact that Ríos Montt was not without his allies in the United States. The Reagan Administration lost its bids to restore military aid to Guatemala until 1985, but not for want of trying.  Following a meeting with the dictator in December 1982, President Reagan opined that Ríos Montt had simply gotten a “bum rap” in the United States, and in fact was fully committed to restoring democracy and “promoting social justice.”  Under the General’s stewardship, Reagan assured, Guatemala deserved the resumption of military aid immediately.  When a liberal Congress, mindful of a growing anti-war movement and the memory of the Vietnam War, denied the request in March of 1983, the Reagan Administration still managed to support Ríos Montt by applying pressure to international lending agencies to help the military government manage its foreign currency reserve crisis, and by reaching out to a growing grassroots network of Cold War hardliners in the Christian Right.  They also still managed to bump up “economic development” assistance provided by USAID.

Ríos Montt’s presidency garnered support from the US Christian Right because in many ways the dictator was one of them. He converted to Pentecostalism at the Iglesia del Verbo in Guatemala City, a church founded in 1976 by North American evangelicals from the Eureka, CA based Gospel Outreach.  In 1979, Ríos Montt traveled to Eureka to meet ministers there who would later join his government as “spiritual advisors.”  When Ríos Montt seized power in a military coup, Gospel Outreach ministers Joseph Anfuso and David Sczepanski received a call informing them of the change in power before most Guatemalans knew.  The two ministers wrote approvingly of one of their own taking on the presidency.

In collaboration with the Reagan administration, Gospel Outreach and other Christian right groups like Pat Robertson’s Christian Broadcasting Network ("700 Club" interviewed Ríos Montt numerous times in the 1980s) poured support into the new government through “Operation: International Love Lift,” a counterinsurgency program that guised itself as a relief effort. Feb. 26, 1983, the Nation reported that International Love Lift had successfully coordinated the arrival of 350 missionaries and over $1 million in food, clothing, and medical supplies to the Guatemalan countryside the same day that the Reagan Administration formally announced its intent to restore military aid.  These materials helped supply the concentration camps (or for regime boosters “aldeas modelos”) where the army herded the traumatized survivors of village massacres perpetrated by paramilitary death squads.  Months earlier in May of 1982, Rios Montt told the New York Times that he wasn’t concerned with restoring military aid from the US, so long as North American evangelicals continued to fill the coffers of the Guatemalan state.

The dictator’s supporters in the Reagan Coalition relied on a healthy dose of red-baiting to dismiss the regime’s critics.  As in the red scares of the first half of the twentieth century, shrill right-wing attacks on all things Leftist coincided with the decline of liberal power at the institutional level.  Consequently, the Central American conflicts, as unpopular as they were with the American public, nonetheless helped strengthen  the Right and weaken the Left.  Institutions which offered criticism of Reagan’s policies and allies in Guatemala and elsewhere in the region, including Human Rights Watch and Amnesty International, found themselves accused of communism by Gospel Outreach ministers, Commentary Magazine, National Review, and Republican congressmen.

Even more chillingly, the FBI conducted surveillance and sabotage aimed at weakening antiwar activist groups in the United States, justifying the policy in anti-communist terms. Among the first of these raids targeted the Oakland offices Guatemala News and Information Bureau a few short months after Ríos Montt fell from power.  The Bureau had been one of the few organizations in the United States which consistently worked to draw attention to the human rights abuses committed by the General.

Ríos Montt’s American allies did not disappear with the 1983 coup which removed him from office.  Instead, Gospel Outreach ministers published a book defending his record.  He went on an American speaking tour in 1984, preaching to born-again Americans about the communist threat in Central America.  His daughter Zury, herself a powerful Guatemalan political figure,married the now retired seven-term Republican congressman Jerry Weller.  Since the genocide trial began, few of the General’s American allies have spoken up on his behalf--to my knowledge, the only right-wing evangelical group to report on the genocide trial has been Christianity Today, which has left the question of Ríos Montt’s guilt open-ended.

So why the media silence in the states?  The American media’s lack of interest in Guatemala, of course, is as familiar as its tendency to ignore some of the most repugnant acts of US imperialism.  As recently as 2012, "This American Life" aired a story on the Dos Erres Massacre of 1982 which came under fire for concealing the army’s alliance with Washington.  Back in the ‘70s and ‘80s, the press paid far more attention to Nicaragua, where socialists had seized power, and El Salvador, where guerrillas seemed to be in a stronger position than the leftist insurgents in Guatemala.  Two Central American conflicts provided more than enough headlines for the public, in the collective estimation of most American journalists and politicians.

Even activists, with several notable exceptions, neglected the Guatemalan conflict, in part because the American role there was less overt and less known.  But the US connections I’ve outlined above are surely the tip of the iceberg, and despite the repeated obstructions it has faced, the historic nature of the ongoing genocide trial in Guatemala surely calls for rigorous investigative journalism and scholarship which re-evaluates the American role in one of the worst human rights catastrophes of the Cold War.

Of course, that sort of work would conflict with some key assumptions in mainstream discourse on American power in the world.  What are CNN or FOX contributors to make of the heroic Reaganites’ support for a violent, authoritarian regime controlled by religious extremists while John Boehner roars on about ISIS “barbarians” in Syria?  And how can Obama’s liberal apologists reconcile partisan biases when confronted with the striking parallels between Reagan and Obama’s Latin American policies, where the governments with the weakest human rights records constitute Washington’s most valued partners in the region, be it in the drug war today or the Cold War thirty years ago?  Today, as in the 1980s, Washington policymakers and their assorted media mouthpieces shudder at the thought of exposing the many contradictions of an empire in decline.

Whether Ríos Montt will ever see the inside of a prison cell remains up in the air, and the prospect of the 88 year old dying before the trial reaches its conclusion is distinctly possible.  As long as the government remains in the hands of the likes of Otto Pérez Molina, himself a perpetrator of genocide associated with the kaibiles, Guatemalan death squad operatives who have since found a role for themselves in one of Mexico’s most vicious drug cartels, it seems unlikely that someone as high level as a former head of state will receive punishment for his crimes.  At the same time, social justice groups in both the United States and Guatemala have had some success in bringing the conflict’s war criminals to justice and exposing the atrocities of the 1980s.  But the question remains, how many Americans will ever know?