To hell with academia: How I learned to embrace my evil advertising gig 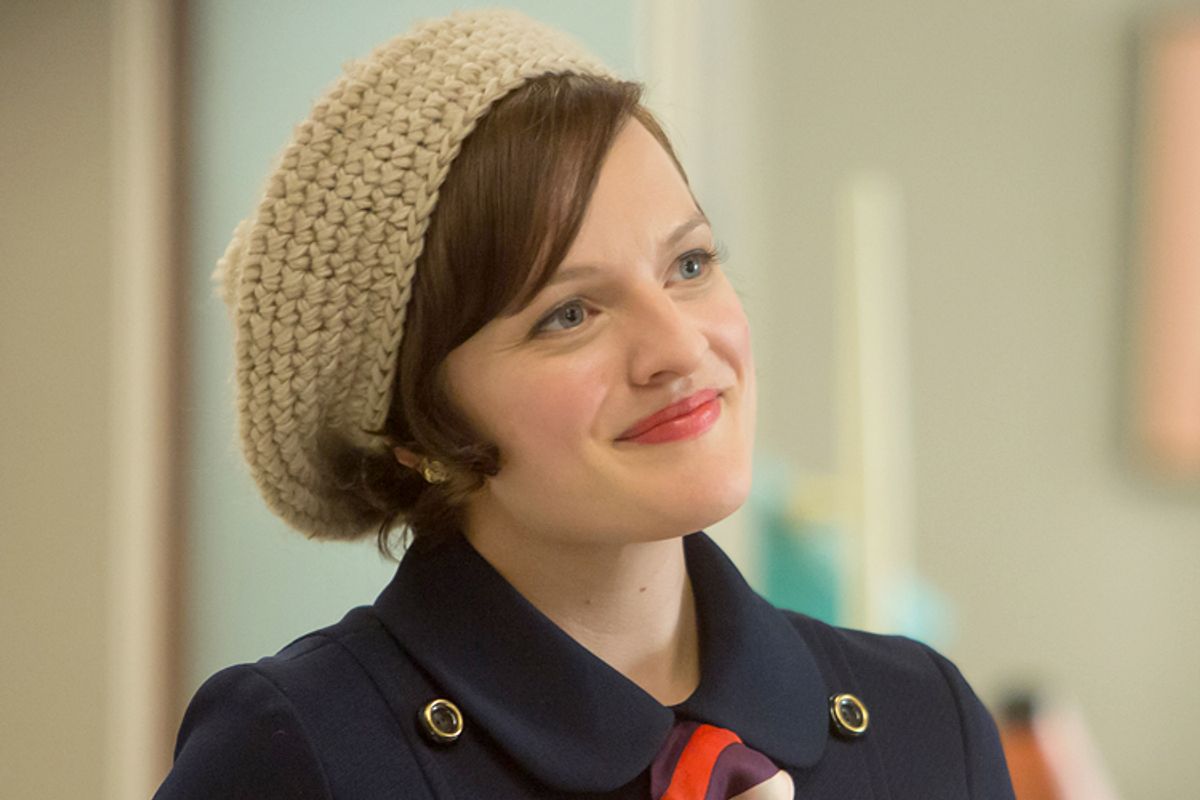 I have some version of this conversation at least twice a month. Recently, I ran into a woman I know in the locker room at my gym. We’d last seen each other when we were both assistant editors at a city magazine in 2005.

Back then, I also worked part-time as an adjunct professor of creative writing at a small private college and she was toying with the idea of going to grad school. Today she’s finishing her Ph.D. in media studies and looking for a position in academe. As we dressed, we talked about her experience as a returning student, her dissertation, the job market. Then she asked what I’ve been up to.

I told her about my kids—all grown up!—and that I have a new novel coming out, my third. Then I said, “Also, I’ve been working in advertising for about the past seven years.”

More from DAME: "I Couldn't Afford to Lean In"

“Oh.” She stood in her bra and underwear, towel on her head, nose wrinkled as if I’d just made a very bad smell. “Really?”

“Yes, I love it. Good work, creative people. And the clients are nice—grateful, usually, for whatever I do.”

“Well,” she said. And she swallowed. “I could never do that. I guess I’m just too much of a socialist.” She laughed, then asked, “How can you devote your life to something so mercenary? I need a career that makes a contribution, helps people, does some actual good.”

I smiled and took a breath. “I understand that viewpoint,” I said and slipped my shirt on, preparing to make a quick escape. “But I look at it differently. Have you seen the rate of student debt these days? And if you’re a professor in media studies, you’ll be encouraging students to go into that field?”

“I honestly don’t see how that’s helping people,” I said. “Teaching seemed like a great thing to do until I realized I was part of a system that encourages students to stay in school—no matter how much money they have to borrow—and study things like mass media and creative writing. They get out owing $50,000 and can’t get a job.”

I zipped my jeans. “In my agency we pay our student interns, train them like crazy, and hire more than half of them. That’s my contribution.” Then I picked up my bag, waved, and left.

I graduated from the University of Iowa with an MFA in 2002, before anyone was talking about the student-debt bubble.

The stated point of the program was to cultivate great writers. And they do. But of the 12 people who graduated my year, I am the best-known writer. And to be honest, prior to this essay had you ever heard of me?

I can’t say with certainty what happened to the other 11, but of the five I’m in touch with, four teach in small private colleges. The other one started a moving company that’s been very successful. (I wonder if anyone lectures him about the mercenary nature of what he does.)

It was generally accepted in our program that most of us would go on to teach. And with the growing popularity of writing programs there would be plenty of good jobs. I attended MLA—the Modern Language Association convention—in ’02 ready to snatch up one of those positions. But there were swarms of sweaty literate people there, lined up at every booth. I met a guy who had his Ph.D. and three published books, yet he’d been on the market for four years. He told me, nervously, that he thought he was getting close.

It quickly became clear to me that finding a real job in academe would mean dozens of conventions and interviews, then moving my children wherever a committee would have me. Tennessee, Arizona, South Dakota. So I resigned myself—as most MFAs do—to taking adjunct jobs in my region. I spent a couple years cobbling together a living from two or three colleges, teaching up to five sections per semester plus summers and weekends.

More from DAME: "My Husband Convinced Me I Was Insane"

By the time I met the socialist in 2005, I’d published a novel that was a critical—but not commercial—success. To support myself and my three adolescent children, I was working at the magazine full-time and teaching evenings. It was a punishing schedule. I thought it was the only way.

The following year I was offered a copywriting job at a high-end marketing agency. They wanted a storyteller—someone who could apply great narrative to their client’s campaigns. My boss was happy to let me continue teaching; I could work two-thirds time and come in whenever I liked. Yet my salary was higher than it had been, either as a full-time adjunct professor or a magazine editor. It was an ideal combination that left me time to work on my second book.

But when I mentioned my day job, the faculty in my department were unimpressed. So were my students. Advertising? They wanted to be “real” writers, day in day out. That’s what they were studying to do, what their mammoth loans were for.

Of my 30 students that term, I felt only two had the raw skills a competitive writer needs. The other 28 would have been better suited to other careers. But I wasn’t allowed to say this. When they came to my office seeking advice, it was my job to encourage them. The college was very proud of its creative writing program and it had nine adjuncts just like me—MFA graduates who’d published minor books—on their staff.

That boom in MFA programs naturally created a surfeit of instructors hoping to write a great novel or memoir, but supporting themselves “in their chosen field” by teaching—for a few years if they’re lucky, or a lifetime if they aren’t.

At the same time, student debt is ballooning. The recession pushed many people who had lost their jobs to go back to school. After all, loans were easier to come by than wages. But the problem with this approach quickly surfaced. Forbes reported in late 2013 that U.S. student loan burden had hit $1.2 trillion, “crippling students, parents and the economy.”

There are myriad factors that went into this crisis. But among them is the financial incentive of higher education: For-profit and online colleges are marketing squishy degree programs and make-your-own majors. Nonprofit institutions are raising tuitions, presenting federal loans as part of students’ financial aid package, and growing majors that appeal to at-risk students, without putting in place programs that will help them stay enrolled in school.

The way colleges and universities operate as employers is an ingredient, too. Nowhere is income inequality more apparent than in higher ed where tenured professors may make $300,000 per year for teaching three sections (and taking sabbaticals) while faculty instructors earn $40,000 for teaching nine.

Non-tenured instructors across the arts need warm bodies to fill their sections. More creative writing, drama or dance majors translates into more opportunity for adjuncts to support their own work. They need the blessing of department chairs, who tend to look favorably on teachers who promote their discipline’s worth.

Laura McKenna, writing for The Atlantic in October 2012, said, “instructors could help solve our college loan crisis” by talking to students about debt and keeping them on a four-year plan. But according to her research, almost none do. The reasons professors cite range from privacy to lack of expertise. But there’s another one. Instructors are expected to help sell their departments with unmitigated cheer. Media studies? It’s not only your passion; it’s a great road to success. Why, there are hundreds of things you can do with a media studies major! It’s versatile. This course of study teaches you to be a thinker.

What is this if not advertising? I ask.

I’m hardly the only one defecting from academe.

Last year, BuzzFeed reporter Anne Helen Petersen wrote an essay about leaving the academic market after just a few months of facing “the overproduction of Ph.D.s, the corporatization of the university, [the] adjunctication of the workforce [and] the horror of the humanities job market.” Petersen writes that she never expected her ten years of grad school to lead to a job where she put together a history of TMZ. But she’s proud of the work and free from the lack and fear that drive higher ed.

A friend of mine with an MFA in poetry recently left her post at a small Minnesota college for a marketing/communications job. She departed mid-semester, a term where she was teaching three sections at such weird times that they required her to make eight round-trip commutes (16 miles each) to campus each week.

“I loved encouraging smart young people from the most unexpected corners of life to think in ways they had never tried,” she said. “So of course I repeatedly forgot the white water ride of semester-to-semester class assignments and paycheck-to-paycheck living long enough to be committed to another spring, another fall. Completely unsustainable.”

And JC Hallman, another fellow Iowa grad and author of six books, just resigned his tenure-track professorship at Oklahoma State University. He writes abstractly about the “prison” of teaching in his new book, B & Me: A True Story of Literary Arousal.

“As a general principle, writers teach. Essential writers may teach only cursorily—leasing out their names to diabolical institutions, limiting their contact to responsive graduate students—but nonessential writers teach under- graduate courses like galley slaves, and the problem of course is that to be a teacher, to be shackled deep in the hull of some slave ship institution, is to not be a writer at all.”

In an interview with me, Hallman was even more direct: “My concern is everything Noam Chomsky has said about the corporatization of higher education. Once you start thinking of students as customers rather than students, you become more concerned with making sure your customers feel like they've gotten their money's worth, rather than an education. In other words, it's naïve to think that the scam of higher education is limited to online degree mills.”

I know some truly amazing teachers (the poet-turned-marketer among them). And I miss academia because I loved my students—including the ones who were best suited to become engineers. I did help two extraordinary writers emerge during the years I was adjuncting: one is working on her second novel, the other became an Episcopal priest.

But what weighs on me are the hundreds (thousands?) of students who sat in my classes between 2002 and 2009, churning out pieces for workshop, racking up enormous bills, and heading out into this economy overburdened and underprepared.

I would never claim that my work in advertising is socially conscious. It’s business. But in my opinion it’s just as ethical—and probably far more honest—than higher education as a whole.

Over the past seven years, I’ve volunteered my copywriting to various causes and organizations, including the same-sex marriage amendment in Minnesota (which passed in 2013) and the YMCA. I’ve been involved with BrandLab, a nonprofit devoted to helping at-risk teens prepare for careers in advertising, marketing, and graphic arts. I’ve also counseled dozens of young people on how to minimize student debt.

Yet every couple of weeks, I run into another highly educated person who wants to talk about the evils of private sector business and the virtues of academe. It is a brilliant and widely accepted but flawed public relations campaign.