The red-state media war with no winners 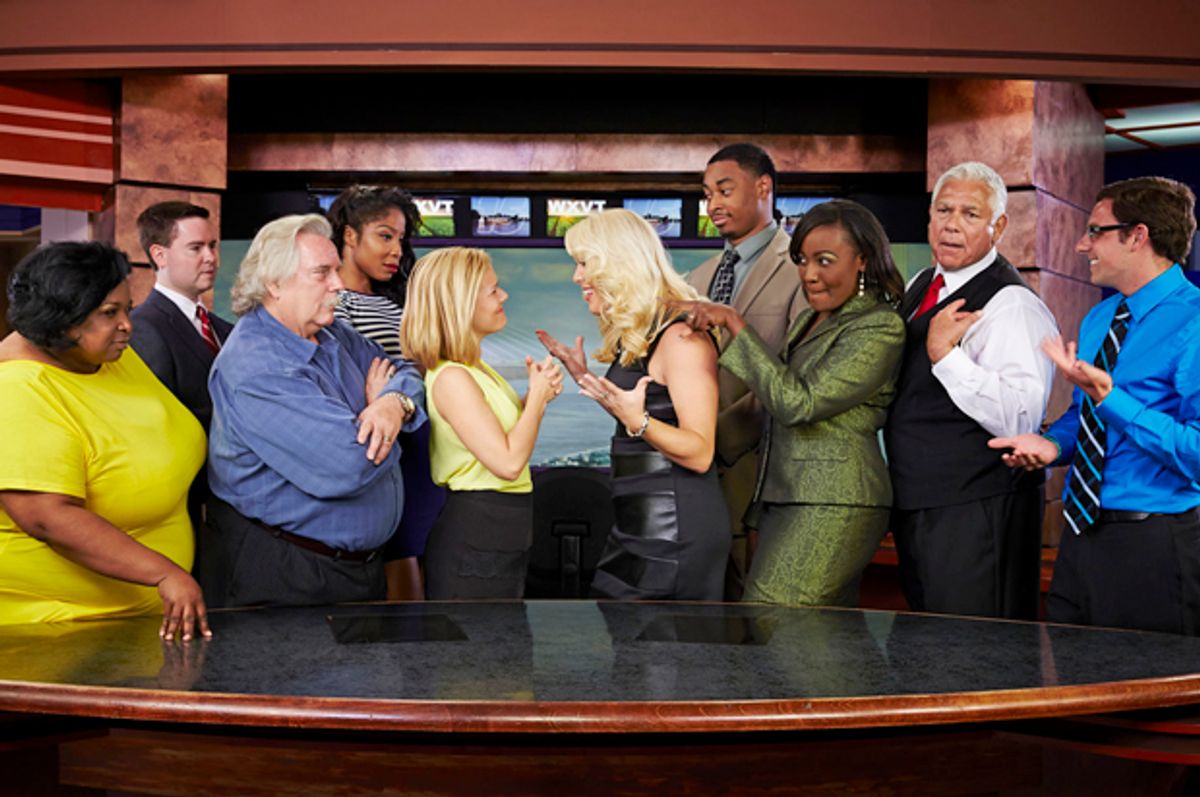 There is a reality show for everything: singing competitions, pawn shops, venture capital funding, ice fishing. With “Breaking Greenville,” there is now a reality show about the news—the local news, to be exact, the leading edge of that hybridization of news and entertainment. The Will Ferrell film “Anchorman” mocked local news in 2004, in what has become a now-iconic satire of the narrowness of the local TV affiliate—the disproportionately outsize personalities, for example, or the news team’s eagerness to spin news out of what is, at the end of the day, basically nothing.

“Breaking Greenville” is not quite so consciously funny, but it is an almost shocking show—“preposterous,” the New York Times put it, when the show debuted in January. The TruTV show follows two news teams in the same small market of Greenville, Mississippi, eventually focusing on the rivalry between the town’s two morning news hosts—Callie Carroll, at WXVT, and Lucy Biggers, at WABG. When the series debuts, WXVT is creeping up to WABG in the ratings, and the pressure is on all of the anchors to get and retain audience members. That journey has taken them through Lucy’s first few attempts at on-location broadcasts, Callie’s on-air weight loss regimen, and meteorologist Steve Schill’s particularly bizarre post-divorce journey.

Greenville, Mississippi has just north of 30,000 inhabitants, and is in the middle of the impoverished Delta region of the South, a federally designated focal point for economic development. Greenville is hundreds of miles away from every major city in the South—the closest recognizable city is state capital Jackson, about 100 miles away; Little Rock, Arkansas, and Memphis, Tennessee are both about 150 miles away. Mississippi has the worst public education in America, save the District of Columbia; neighboring Delta states Alabama and Louisiana round out the bottom of the rankings.

TruTV, as Vox Culture Editor Todd VanDerWerff put it, is all about “goofy reality” TV. It’s a marginal network under a huge corporate umbrella—TruTV is owned by Turner Broadcasting, the conglomerate that owns CNN, TNT, TBS, and more. TruTV, he writes, used to be CourtTV, but as national court cases have declined in importance, it took on the niche of weird, offbeat reality programming—including “Fake Off” and the hilariously titled “Conspiracy Theory With Jesse Ventura.”

“Breaking Greenville” fits squarely into that category. There’s something not just odd but almost horrific about it; underneath all the small-town quirks, the audience can glimpse a little piece of how much this community has been eroded away. Late in the season, Lucy interviews a woman whose house has been destroyed, and the petty office politics drop away for a moment, giving her a chance to focus on the story at hand. Then she does a location shot in front of the studio, hoping to entice a passerby into eating a hot dog at the stand she’s set up. The audience doesn’t get a chance to look at the finished broadcast—complete with the daily birthday announcements, because, 30,000 people—but we all know how our own local and national news works; we can guess how much airtime the woman’s destroyed house (and the circumstances around it, and what that means for the rest of us) ended up getting.

That’s ultimately the show’s fascinating hook—that this stuff is all, technically, news; that these people are the gatekeepers, after a fashion, of some version or other of the truth. The media business is not for the faint of heart, and no one likes to say that more than navel-gazing media people—but in a world where we have “The Newsroom,” it’s satisfying to also have “Breaking Greenville.” The Times suggested that the reality show might make us grateful for the pomposity of Sorkin’s HBO show, but to my mind, “Breaking Greenville” tells the far more interesting side of the story—not the foibles of the media elite, but the trials and tribulations of a forgotten, fringe market.

Indeed, the news anchors are barely holding on to life in Greenville—and who could blame them? Junior meteorologist Eric Zernich has an eye on a recent opening in Peoria; news director Woodrow Wilkins is on vacation in Florida; producer David Lush is organizing a community musical and dreams of directing. Recent grad Lucy is always good for a soundbite about New York City or Los Angeles—“The Today Show” has 30 Rock, but she has Washington Avenue; Hollywood has their Oscars, but Greenville has the Delta Democratic Awards.

Those awards take up some space in the latter half of the season; WXVT and WABG are absorbed in a tense cold war over who will gain the readers’ choice award for “Best TV Personality.” They all show up to the event, hoping for the best, expecting the worst. But first they have to wait out the other awards. Best Restaurant. Best Car Repair Shop. Just another day in Greenville.

Most reality TV exists at the expense of someone. Either the participants are being exploited, or the audience is being manipulated, or the community the show takes place in is slowly being devalued. “Breaking Greenville” doesn’t feel like someone is being taken advantage of, because in some ways, it sort of seems like the damage is done. It exists at the intersection of small-town life, rural sensibilities, the cutting edge of journalism, and the lingering economic downturn. Every little flub, from a dropped cue to a factual error, seems less like a portent of advancing doom and more like one last broadcast from a sinking ship.