"Get Hard" is a bloated, lazy prison rape-joke trainwreck 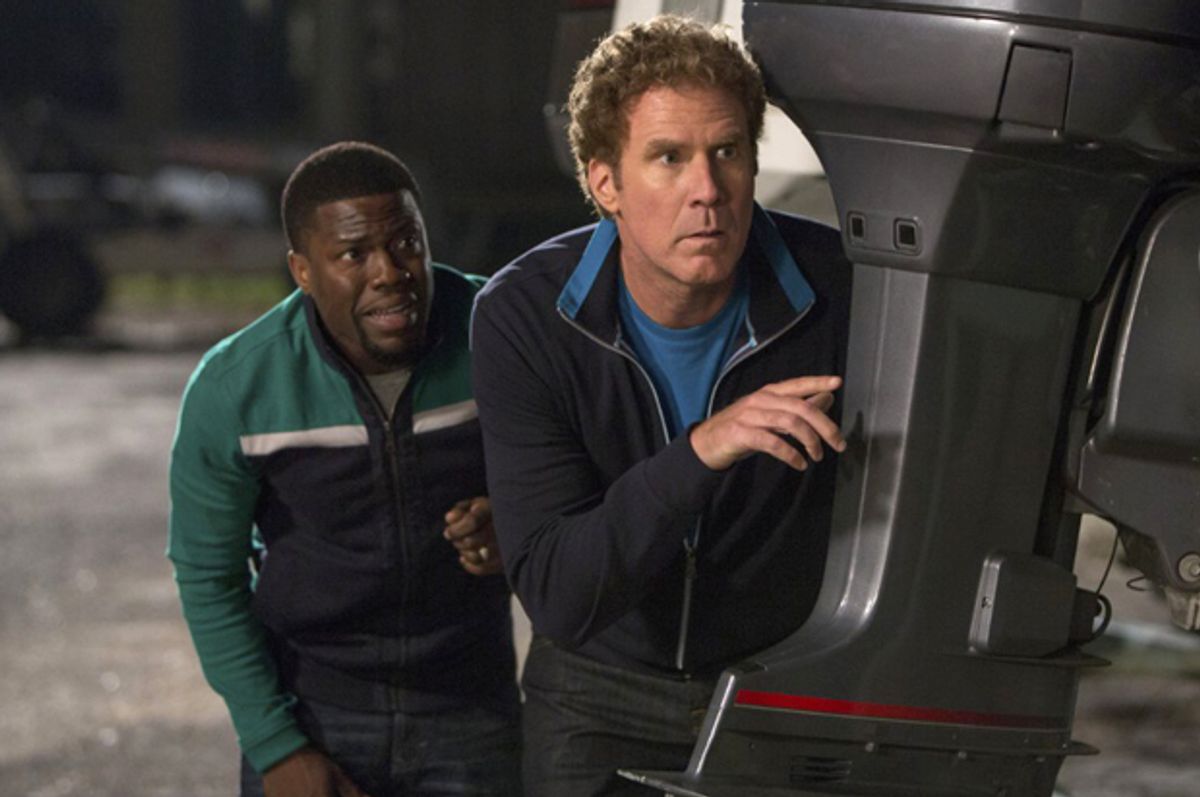 Kevin Hart and Will Ferrell in "Get Hard" (Warner Bros. Entertainment)
--

People who complain that the shambling new Will Ferrell-Kevin Hart comedy “Get Hard” is racist and homophobic are just being lazy – although not half as lazy as the movie itself, which has brought this fate on itself through its mixed messaging and total incoherence. Yes, this is the motion picture in which Ferrell’s character finds himself on his knees in a West Hollywood men’s room, seeking to master the fellatio skills that will help him survive in maximum security prison, and in which he later tries to join a South L.A. street gang by strapping on a “burner” and heading into the streets to “smoke some fools.” And yes, I will maintain that to dismiss “Get Hard” as racist or homophobic is missing the point, or at least making a categorical error.

If those words are to mean anything at all, it has to be more than “likely to give offense to someone” or “susceptible to misinterpretation.” Mind you, I’m offering only the feeblest possible defense for “Get Hard,” which begins with vague intentions of constructing a crude Dickensian satire on American inequality and squanders about 99 percent of its energy on labored comic sketches that don’t pay off. This movie’s problem is less that it traffics in outrageous stereotypes – effective satire does that almost by definition -- than that its purported reasons for doing so get lost amid a bloated, cluttered star vehicle. You’d have to be extraordinarily dense not to see (as the filmmakers have defensively pointed out) that Ferrell’s clueless and entitled white-boy character is the butt of the joke, in the above-mentioned instances and many others, but the theoretical why behind those jokes has evaporated entirely.

Ferrell plays a hedge-fund zillionaire named James King, who has a giant house in Bel Air and a rich-bitch fiancée embodied by Alison Brie in some supposedly sexy underwear. All the actors in “Get Hard” are stuck with dreadful non-characters, but if you ask me, Brie’s paper-thin misogynist caricature is the most insidious and unexamined stereotype in the whole movie. As for Ferrell, he’s a powerful and instinctive actor who has great trouble faking enthusiasm, and his listless, dead-eyed performance as James is more than Method acting. James has been convicted on numerous counts of fraud and is being sent to San Quentin by a hard-ass judge eager to send a lesson. No, this isn’t remotely plausible – but it might be a good thing, right? I mean, setting aside the hilarious question of prison rape, which generates the ludicrous and increasingly unfunny plot of “Get Hard,” compelling white-collar offenders to serve time alongside other kinds of criminals could serve as an actual deterrent.

Not to go off on a tangent here, but this is a good spot for the bizarre subject of prison rape – a subject most of us would agree is inherently not all that funny -- as a central ingredient in guy-oriented comedy. This was pretty much a pandemic during the post-metrosexual, pre-gay-marriage era of Judd Apatow Sex Panic, and reached its apogee with “Horrible Bosses” in the summer of 2011, the movie that features a running argument between Jason Bateman and Jason Sudeikis over which of them will be more “rape-able” if their low-grade criminal scheme lands them in prison. That gag worked way too hard to be outrageous, like everything else in that film, but its exploration of new frontiers in male vanity – the only thing worse than becoming someone’s prison-house bitch would be not being cute enough -- is funnier and darker more original than anything in “Get Hard,” whose sexual politics seem borrowed from an abandoned “SNL” skit, circa 1986.

Anyway, no – it isn’t a good idea to send this particular white-collar criminal to Quentin because he’s played by Will Ferrell, which means he isn’t a criminal at all but a wrongfully convicted and essentially lovable doofus. A doofus who has made millions working at some Madoff-flavored elite investment fund, a doofus who begins with the assumption that all black men are criminals, and a doofus too dumb and oblivious to perceive that his intended bride is a soulless and conniving gold-digger. You see what I mean about mixed messaging. It’s clearly not as damaging to the film’s satirical intention that Hart plays a middle-class striver who owns his own business, rather than the street-hardened thug Ferrell-doofus takes him for. But that too is a failure of narrative nerve that feeds into the overarching buddy-movie logic of “Get Hard”: Yeah, racial and economic injustice, what a bummer – but these two American goofballs are just the same under the skin, so yay.

“Racist and homophobic,” in this case, has nothing to do with conscious intentions and very little to do with real-world effects. Instead, it reflects the fundamentally reactionary nature of Hollywood storytelling, which undermines and defeats most attempts at “content” or “meaning.” Actually, it’s worth expanding on that point: “Meaning” is welcome in Hollywood movies when it’s figured as individual inspiration and transcendence, but must be neutralized or turned upside-down anytime it arrives tinged with larger social critique. Kevin Hart’s on-screen wife, a character so free of characteristics she should be called Nice Middle-Class Black Lady (no fault of the likable Edwina Findley Dickerson), cracks a joke about the corny plot of “The Blind Side” in this movie, but “Get Hard” is a lot closer to that kind of anodyne post-racial uplift than it thinks it is.

As the seven-figure executives in those sprawling office suites all over the western half of Los Angeles County would assure us, this has nothing to do with politics per se. (After all, those people are mostly liberals, if we take that term in its contemporary meaning of “those who stuff Hillary Clinton and Chuck Schumer full of cash.”) It has to do with protecting valuable assets like Ferrell and Hart by keeping them light and likable, and it has to do with giving the people what they want, or at least what the entertainment industry has trained them to expect, which comes to the same thing. People don’t want an earnest lecture about economic inequality or the incarceration rate among African-American males at the end of a hard workweek; they want fun, escapist fantasy, which evidently means Will Ferrell on his knees in a toilet stall, trying to get a dick in his mouth.

So I’m willing to believe that first-time director Etan Cohen (previously the co-writer of “Tropic Thunder” and Mike Judge’s “Idiocracy”) went into this with somewhat benevolent intentions, which remain visible here and there: Let’s make a silly, raunchy comedy that allows two hugely popular stars a chance to explore the enduring absurdity of racial misperception, or something like that. But Cohen had neither the chops nor the clout to prevent “Get Hard” from ending up, no doubt through the normal process of producer rewrites, focus groups, worried agents and weevil infestations, as a confused and contradictory mess. More to the point, it’s almost never funny, and full of elementary screenwriting blunders I won’t bother to list: Some scenes should be longer while others (many others) should have been cut, and nothing about the plot or the timeline makes any sense. It’s like a movie written by an ambitious seventh-grader who has constantly been told how amusing he is, and then rewritten by the school principal to make sure it doesn’t go too far. Come to think of it, the kneejerk critics are right after all: This movie is racist and homophobic, but that’s a minor side effect of its badness, not the cause.