Health store worker who posed with Rahm Emanuel: "Mayor 1%" is a terrible tipper

“The only time I see him on the South Side is when it comes time for elections.” 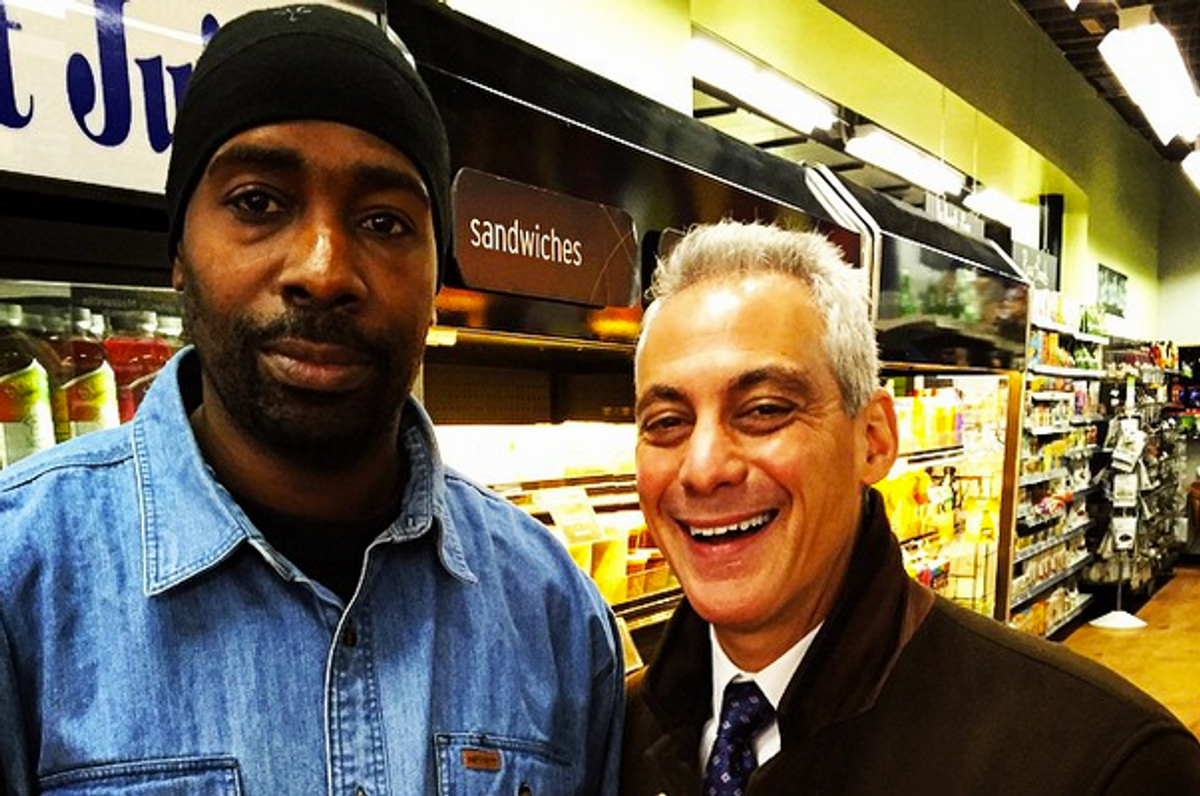 After a photo of a health store worker posing stone-faced next to an uncharacteristically ebullient Rahm Emanuel went viral on Wednesday, the man in the photo told In These Times that the Chicago mayor only cares about the city's poor and working-class residents when there's an election on -- and that he's an atrociously bad tipper, to boot.

The man in the photo, whom In These Times identified as "GQ," posted the photo to Instagram with the caption, “The Mayor of Chicago Rahm Emanuel came by my job, still can't stand this muthafucka tho." While GQ added the photo two months ago, it took off on social media Wednesday, less than two weeks before the mayor's runoff election against Jesus "Chuy" Garcia. GQ told In These Times' Micah Uetricht that he was on the job at a health food store on Chicago's South Side when the mayor stopped by and asked for a photo.

“He was smilin’ and cheesin’ and stuff,” GQ related. “I’m like, dude, come on: you’re only doing that because you’re trying to get elected. You’re trying to make it look like you’re a man of the people. But you’re not.”

He added that the mayor -- whose neoliberal policies earned him the moniker "Mayor 1%" -- is really only concerned about the city's most affluent residents.

“He only caters to people on the North Side, like the Gold Coast,” GQ said. “The only time I see him on the South Side is when it comes time for elections.”

Meanwhile, GQ said, the mayor has done too little to address -- and in many cases has brought about -- the woes confronting the rest of Chicagoans.

“So many people have been killed. … 50 schools got closed — and most of them on the South Side and West Side," he said. "But you cater to the people in Gold Coast. Why don’t you [cater to] the South Side?”

GQ found himself just as unimpressed with the mayor's tipping.

“He’s real cheap," he said. “My friend who made the drink [held by Emanuel in the photo] only tipped him like a quarter or 50 cents." The drink cost $7, GQ said.

While he's no fan of Rahmbo, GQ identified one politician who does have his support.

“The only politician I’ve got mad respect for is Elizabeth Warren," he said. "I love her."