A friendly interview with righty Hugh Hewitt gave Walker a do-over on his foreign policy flubs. Um, it didn't work 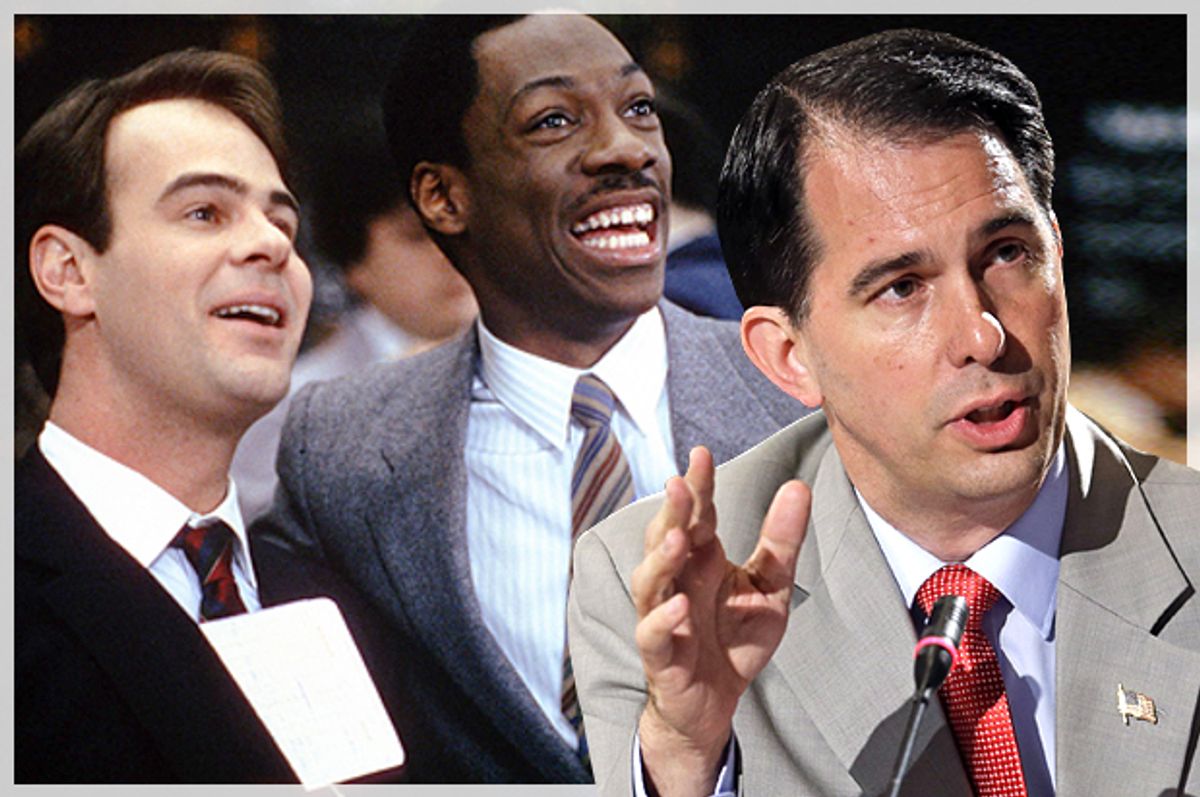 Wisconsin Gov. Scott Walker is widely viewed as botching his early opportunity as nominal frontrunner for the 2016 GOP nomination. Even on the right, some former admirers are lamenting Walker’s early mistakes handling questions about evolution, President Obama’s religion and how he would handle ISIS (he memorably compared the challenge to battling pro-union Wisconsin protesters in 2011.)

On Wednesday the National Review's Eliana Johnson reported that even on the right, “the whispered doubts about whether Walker can successfully scale up are louder than ever.”

So Wednesday evening Walker visited the friendly confines of Hugh Hewitt’s radio show to get a do-over on some of his early flubs. With Hewitt’s careful coaching and supportive framing, Walker mostly did OK. But he still sounds like a high schooler trying to remember cram sessions when he’s talking about the Middle East. He talked tough on Iran, promising to overturn any nuclear deal struck by Obama “on Day One.” He took a Palinesque jab at the president as a "community organizer" who doesn't know how to lead. Then he got even sillier, illustrating the Iran-Israel conflict with a reference to the movie “Trading Places.”

Walker: I remember the movie in the 80s, Trading Places…

Walker: …you know, with Dan Aykroyd and Eddie Murphy, it’s like Iran and Israel are trading places in the sequel. In the eyes of this president, our ally is supposed to be Israel. Our adversary has been historically Iran. And yet this administration completely does it the other way around. We need to call radical Islamic terrorism for what it is, and a commander-in-chief who’s willing to act.

No word on which nation is Aykroyd and which is Murphy; hoping other reporters will follow up. (If Walker finds that metaphor doesn’t work, he can play around with “Freaky Friday.”)

The Wisconsin governor also got a chance to brag about the way he’s redefining big questions of national security as “safety” issues. It’s apparently because only pointy-headed intellectuals care about “national security;” real Americans think of it in terms of safety. Here’s what he said:

I think it’s come to the forefront not so much because “national security,” that, to me, as I said [at lunch], is on page 6A of the newspaper where only a handful of us read into that. But when people see the videos, when they see the Jordanian burned alive in a cage, when they see the Egyptian Christians who were beheaded, when they see some of these other folks from around the world, including James Foley, who went to Marquette University where my son’s a junior, and suddenly, that becomes very real to everyday Americans…

I think increasingly, Americans feel a sense of concern that particularly if they have family members or loved ones that ever want to travel again, they see France, they see Canada, they see other places around the world, not just the Middle East, and it’s a safety issue.

So much for that “leader of the free world” stuff.

Hewitt tossed Walker a big old softball with a question about the reaction to his comments seeming to compare ISIS to Wisconsin protesters. Even the National Review’s Jim Geraghty thought it was an embarrassing gaffe, but not Hewitt. “I was on Meet the Press that day,” he bragged, “and I said that was not a gaffe...he did not say that.”

A grateful Walker agreed, and explained his thinking:

The closest thing that I can compare to the type of pressure the next president’s going to be under is what I went through four years ago with not just the protest, but the death threats, with the intimidation, with all the interruptions, with the recall and all the things that happened. And we didn’t back down. We won without caving not just when it came to the ballot box. We won without caving when it came to policy. And I think that’s when Americans want, whether it’s taking on radical Islamic terrorism, or whether it’s taking on the size and scope of the federal government, or whether it’s pushing to put the power back in the hands of the hardworking taxpayers. They want someone who’s going to fight and win every single day.

So to summarize: Walker essentially repeated his ISIS claim. I don’t think most critics thought he was literally comparing the protesters to bloodthirsty Islamic terrorists. His mistake was ludicrously inflating the threat and the leadership challenge they posed to him, in order to claim he was tough enough to fight ISIS. He did it again, and it's still ludicrous.

Despite Hewitt’s hard work, the hits keep coming for Walker. Earlier this week Yahoo’s Michael Isikoff took a deep dive into the email and other documents released in John Doe probes into Walker’s campaign practices, to find a secret $1.5 million donation to the governor’s re-election from a rightwing businessman, who later got $1.8 million in tax credits from an economic development corporation Walker chairs.

On Wednesday, a Pew study found that Wisconsin ranked number one in the number of residents slipping out of the middle class since 2000. Another survey revealed that the state is home to the nation’s highest rate of black unemployment. Of course, Walker isn’t touted on the right for his success reviving the state’s economy – he hasn’t – but for busting its unions. Still, Walker’s GOP opponents are likely to find that primary voters care about his lackluster record in Wisconsin.

Expect Walker’s defenders to say that his “Trading Places” reference and his dumbing down national security to “safety” make him a regular guy voters can relate to. Here’s hoping regular guys are insulted by the condescension.