Obama geeks out to "The Wire": The complete transcript of his interview with David Simon 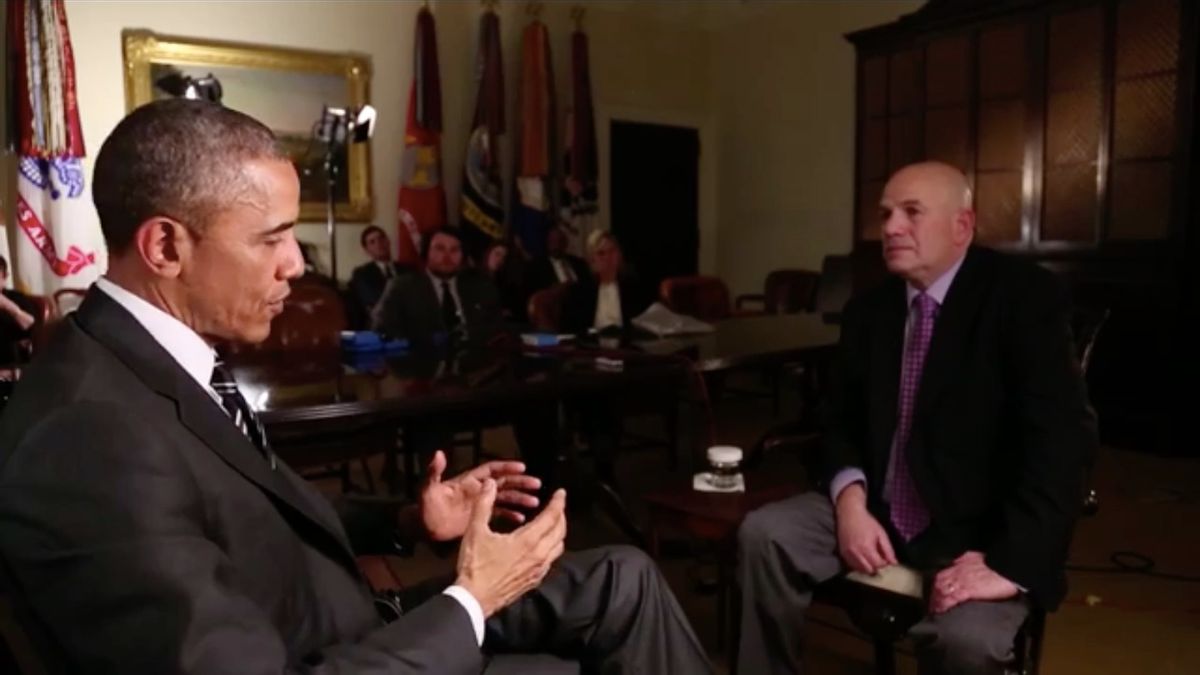 Yesterday, diehard "Wire" fan (and U.S. President) Barack Obama sat down with the show’s creator, David Simon, for a smart, candid and wide-reaching conversation about the war on drugs and the challenges faced by law enforcement today. Here’s the full transcript, or you can watch the video below.

Obama: At the front end I’ve got to tell you, I’m a huge fan of “The Wire." I think it’s one of the greatest not just television shows, but pieces of art, in the last couple of decades. I was a huge fan of it. What is it that you saw or you learned or you heard that made you start thinking about the culture of the drug trade and its impact on the inner cities, that compelled you then to want to tell these stories?

Simon: Well, I was in Baltimore and it’s a very drug saturated city, or it certainly was in the '80s when I arrived. This was a time where people thought they could arrest their way out of a drug problem, and they actually tried to do that. And what became increasingly obvious to me over the years of covering it was that when you devote yourselves to street-level drug enforcement, when you try to win the drug war, you only have a limited number of resources, limited amount of resources. And I watched the police department in Baltimore, and then I noticed it in other cities -- other cities with the same sort of problems of drug use, they stopped doing police work. They were arresting people for drugs, and that was presumptive police work but actually it wasn’t. And at the same time that the numbers of drug arrests, and the incarcerations for drug arrests, went up, and they were small incarcerations, they were two, three months in jail because you couldn't put them anywhere, you couldn't build prisons fast enough. Meanwhile, the arrest rates for robbery, murder, were going down. And the one thing that makes cities safer is competent retroactive investigation of felonies. That actually can make a city safer. But to do that you have to used and not be used by informants, you have to know how to testify in court, you have to write a search warrant that is going to hold up.

Obama: The good news is that some of the smarter police departments started to figure this out.

Obama: And we’ve seen reductions in violent crime in most big cities in America, in some cases precipitously, partly because I think there was an awareness we were so invested in street-level drug transactions we were losing focus on what was really important, which is that people wanted to be safe. On the other hand, what we know is that a consequence of that was this massive trend towards incarceration, even of non-violent drug offenders. And I saw this even during the period that you were reporting and then starting to write for television. I saw this from the perspective of a state legislator, this, just, explosion of incarcerations, disproportionately African American and Latino. And the challenge which you depict in your show is, folks going in at great expense to the state, many times trained to become more hardened criminals while in prison, come out and are basically unemployable. And end up looping back in.

Simon: Permanently a part of the other America, they can’t be pulled back. Nobody incarcerates their population at this level. And to look at it when I came in as a police reporter, the federal prison population was about 34% violent offenders. When I left as a police reporter 13 years later, it was about 7%. So these were less violent people getting longer sentences, of course there was the elimination of parole and good time, all you had was good time, so people were staying in. And you're absolutely right, they come out completely tarred, they can't vote, they can't participate in their communities, they’ve lost track of families, families have been destroyed, communities have been upended. And if it was this draconian and it worked, then maybe we could have a discussion that said what we’re doing is working --

Obama: 'The tradeoffs were working.'

Simon: Yeah: ‘It’s terrible and we’re losing a lot of humanity, but hey, it’s working.’ But it doesn’t work. It’s draconian and it doesn't work.

Obama: I've been looking at, because it’s part of the fallout of what you describe: As the economy's recovering, unemployment is coming down drastically. But one of the puzzles we have is we still have low participation rates among the population in the aggregate, but when you break down why people are not getting back in the labor force even as jobs are being created, a big chunk of that is the young male population --

Simon: With a felony history.

Obama: With felony histories. So now, where we have the opportunity to give them a pathway towards a responsible life, they’re foreclosed, and that’s counterproductive.

Simon: The guy who was the model for the character Omar in “The Wire” was a real guy named Donny Anders. I never thought I’d be saying his name in the White House. He’s a guy who lived the life on the street; he spent years robbing drug dealers, he lived hard. And he eventually caught a 17 year bit and he deserved it. But he wasn't caught, he actually went in on conscience, cause it finally got to him. And he did everything that the prosecutors wanted him to do. Ge came out 17 years later and all he wanted to do was give back to West Baltimore; he’d taken so much, he’d been in for 17 years, he just wanted to address himself to the disaster. And on paper that man -- who is an extraordinary man, he’s one of the most extraordinary men I’ve met in my life — on paper he was a convicted felon and a convicted murderer. There was nothing that could get him from that extremity. Multiply that by hundreds of thousands of lives that have been disconnected and have no way to channel back in.

Obama: And part of what — Omar’s, by the way, my favorite character.

Simon: I was worried about that when you said it.

Simon: Right, I mean this is not happening in a vacuum. These are the places in America where the industrialization has had the most effect, and the actual unemployment rates among young Black males in my city bear no resemblance to the actual unemployment rate now. And so thats something that has to be countered, which is that the drug trade itself, it’s like a company town. And this is an industry that’s so large, with so much money around it that it’s hard to get around it if you grow up amid it, and certainly without role models who know how to maneuver around it. And to undo that, taking the overlay that is the drug war and at least rationing it down and making it proportional in some way, is essential. Because right now, what drugs don’t destroy, the war against them is ripping apart.

Obama: Well, here’s the good news. There is an increasing realization on the left but also on the right, politically, that what we’re doing is counterproductive, either from a Libertarian perspective, the way we treat nonviolent drug crimes is problematic, and from a fiscal perspective is breakign the bank. You end up spending so much more on prison than you would with these kids being in school or even going to college that it’s counterproductive, and it means everyone’s taxes are going up, or at least services that everybody uses are being squeezed, or we can’t hire cops to deal with violent crime as you talked about. But we’re all responsible for at least finding a solution to this, and the encouraging thing is I think awareness is increasing. In part because violent crime has gone down in a lot of big cities, people are more open to having a discussion about this.

Simon: Yeah, they’re not as frightened.

Obama: And I think we have to seize that opportunity. But part of the challenge is going to be making sure, number one, we humanize what so often on the local news is just a bunch of shadowy characters, and tell their stories. That’s why the work you’ve done is so important. And the second thing is enlisting law enforcement as an ally on this. Now Eric Holder, my Attorney General, we started talking about this a few years ago when I first came in to office, and one of the things we tried to do is change how we talk to us attorneys and their offices about what is a measure of effective prosecution. And when we came into office,I think what was [practices] in a lot of state’s attorneys offices, the measure was how much time do you get --

Obama: Charge the max. And our point is, effectiveness as a prosecutor involves thinking about justice, and being proportional in how you think about these issues. And that’s something we can do administratively, but ultimately we’re going to need legislation, and that’s where raising awareness is going to be important. And law enforcement and prosecutors have to be able to talk about this, and we have to let them know — and you show this in “The Wire" as well — in the same way you’ve got to be able to humanize those involved in the drug trade, we have to remind ourselves that the police, they’ve got a scary, tough, difficult job. And if the rest of society is saying 'just go deal with this, we don't want to hear about it,' and you’re just on the front lines, and 'just keep it out of our sight lines and its not our problem' we’re betraying them as well. And ultimately you're going to have to address some of the environmental issues. And I know that’s not fashionable because the notion is, 'oh you dont want to make excuses for criminals,’ but what we understand, and what perhaps one of the most moving sections of “The Wire” was, that whole depiction of the schools in Baltimore and public schools, was if kids are left so far behind that they don't have recourse, they’re going to see what else is available to survive.

Simon: They're going to learn.

Obama: They're going to learn something. And so we’re going to have to think about schools and counselors and mental health and ultimately jobs and re-industrialization and I think we understand all that. But if we can start down this path to a more productive way of thinking about drugs and its intersection with law enforcement, twenty years from now we can say to ourselves: ‘well, maybe we got a little smarter.' And we didn’t get here overnight and we’re not going to get out of it overnight, but the fact that we’ve got people talking about it in a smarter way gets me a little encouraged.

Simon: From your mouth to God’s ear.

Obama: I enjoyed it.

Simon: Thank you very much.