Philadelphia has a Ferguson problem: "You’re telling a lie and backing it up with lies" 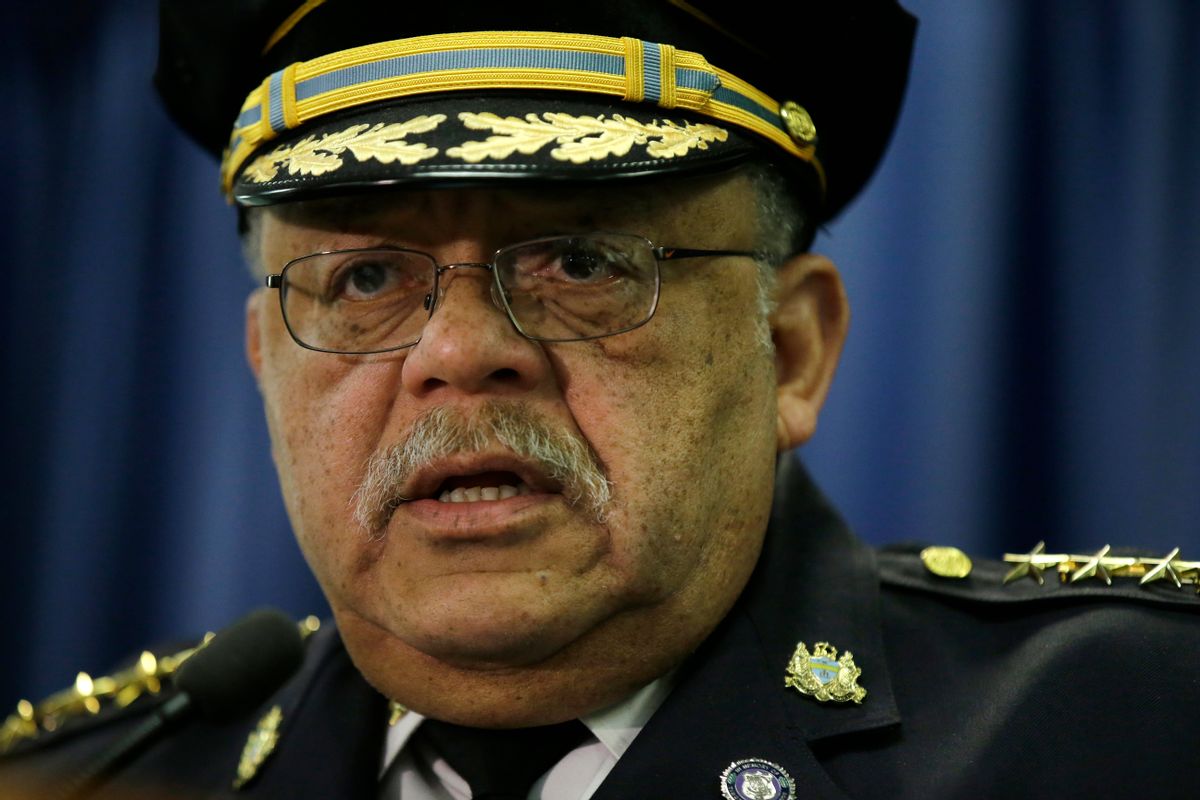 Philadelphia Police Commissioner Charles Ramsey keeps a carefully cultivated image: a soft-spoken reformer, a new kind of “21st century” cop. In a city where police are more often associated with racism, brutality and corruption than protecting and serving, such an image is hard-won indeed, leading President Obama to tap Ramsey to head his post-Ferguson police reform commission.

But this meticulously managed image clattered across the floor like so many metal folding chairs last week in Philadelphia’s Lawncrest district, where protesters angry at the recent police killing of Brandon Tate-Brown got too close for comfort, and Ramsey’s officers responded with force. The protest—and the ensuing melee—brought a flurry of unwelcome national attention to Ramsey’s home turf and raising uncomfortable questions in the run-up to the recent release of a Department of Justice report on Philadelphia Police.

Ramsey wasn’t the only high-powered official at the table, either. In organizing the event, state Rep. Mark Cohen suggested that relations between the police and the community in Philadelphia “do not have the toxic quality that exists in many other places.” This claim rings hollow for protesters who, alongside Tate-Brown’s mother Tanya Brown-Dickerson, have consistently demanded the release of the names of the officers involved and available video footage of the killing, in which Tate-Brown was shot in the back of the head.

That the Lawncrest event on the non-toxic relationship with police was slated to include a representative of the 15th District, where Tate-Brown was gunned down in December, was simply too much for many to stomach. Tensions only heightened when, earlier that same day, District Attorney Seth Williams announced that the city would not pursue charges against the officers involved.

When he, too, showed up to discuss police-community relations, he did little to calm nerves: many saw Williams repeatedly blow kisses to the protesters gathered in the back of the room. He was less smug—indeed, visibly shaken—when the now-provoked moved to the front, some yelling in the faces of two of Philadelphia’s most powerful men from a distance of mere inches. When asked about the protests afterward by a journalist, Williams resorted to the classic canard of the “outside agitator,” suggesting that “the people that were here, I don’t think any of them are from Philadelphia.”

This came as a surprise to Morgan Malachi, one of those spearheading the movement demanding justice for Tate-Brown. Born and raised in Philadelphia’s West Mount Airy neighborhood, Morgan was one of three sisters to be arrested together that night for voicing their anger at the Tate-Brown decision—making nearly a third of the arrestees from this single, Philadelphia-born family. According to Malachi, the fact that the planned town hall coincided directly with the DA’s announcement was a kind of “perfect storm.”

But Malachi and others insist that it was the police and irate white residents that then started the violence. While recent protests have regularly seen protesters angrily face off against the police, this time it was different because, according to Malachi, “they couldn’t handle us doing it to their gang leader,” i.e. Ramsey. Plainclothes officers began to push them around, as did local residents in this historically white neighborhood of northeast Philadelphia. “They want to have these panels in the northeast but not where the Black population lives, they were going to come and give a pro-cop spiel in a pro-cop neighborhood and everything was gonna be fine.” But it wasn’t fine, and soon the chairs were crashing around, the noise exaggerating the serious of the scuffle underway.

It’s entirely likely that Ramsey himself didn’t order the ensuing arrests, and that it was his own officers who slipped the yoke. Indeed, the history of Ramsey’s particular style of policing, while billed as a softer and gentler approach to law enforcement, in fact takes “repressive tolerance” to the extreme, avoiding confrontation at all costs so as to not fuel further protests.

Ramsey rose to prominence as the Metropolitan Police Chief in Washington, D.C., where he presided over the creative use of zoning laws to disrupt IMF and World Bank protests in 2000 and the unconstitutional detention of hundreds of anti-IMF protesters in Pershing Park in 2002. While Ramsey has since disavowed such tactics—for which the city paid more than $15 million in settlements—his strategy in Philadelphia suggests more continuity than change.

When Occupy Philadelphia erected a peaceful encampment in Dilworth Plaza, Ramsey and Mayor Michael Nutter first embraced the protesters, then discredited the movement in the media, thereby justifying the eventual eviction of the encampment. This kinder and gentler approach to defeating nonviolent protest movements—which I have elsewhere compared to recent developments in counterinsurgency techniques—was not limited to Philadelphia, but instead constituted a national strategy coordinated by the Police Executive Research Foundation (PERF). Charles Ramsey is PERF’s president.

True to form, Ramsey’s strategy for managing the wave of post-Ferguson protests was a repeat of Occupy: he allowed protesters to march in circles around the city, refusing to arrest even most of those attempting to storm highway onramps. This hands-off strategy paid off, avoiding in Philadelphia the sort of combative scenes seen elsewhere. It was his role in spearheading this “gentler” form of policing that made Ramsey the preferred candidate for Obama’s Ferguson Commission, launching him onto the national stage. But while empowered to review police practices nationwide, Ramsey has simultaneously and carefully diverted attention away from his local practices, as the Tate-Brown case makes clear.

Nowhere is this strategy clearer than in Ramsey’s task force report to Obama. While the report makes undeniably crucial recommendations—for example, that all police killings should be independently reviewed—Ramsey himself has obstructed such independent review in Philadelphia, including the case of Brandon Tate-Brown. Further, independent oversight has long been the call of those like Kelvyn Anderson of the largely toothless Police Advisory Commission, who often requests information from the police to no avail. This was only confirmed in the DOJ review of Philadelphia police released this week, which concludes that “The PPD does not fully accommodate the PAC,” raising the question of why Ramsey celebrates civilian oversight nationally while stonewalling at home.

Even maintaining his image as a reformer locally often relies on what some critics consider a sleight-of-hand. Take the controversial case of Lieutenant Jonathan Josey, caught on video brutally punching Aida Guzman at the 2012 Puerto Rican day parade. Ramsey quickly dismissed Josey when the video went viral, but when Josey was acquitted of assault by judge Patrick Dugan—whose wife, a PPD officer, was in the courtroom supporting Josey—the path was cleared to his eventual reinstatement with Ramsey’s hands none the dirtier. These local suspicions echo broader national concerns in the wake of Ferguson, as the DOJ highlights systematic racism in the Ferguson PD while refusing to prosecute Darren Wilson for the death of Mike Brown.

Tanya Brown-Dickerson, for one, isn’t happy with Ramsey’s response to her son’s death, and to her demand for the release of the names of the involved officers and surveillance video. When she was eventually shown the video in a private screening, she insists that it was not “because they care about a mother losing her child,” but instead due to the unrelenting protests themselves.

When she finally did view the video of her son’s death, it became clear to her why it still hasn’t been released to the public. While the official story is that Tate-Brown was stopped for not having his headlights on, the video clearly shows them to be on, a fact corroborated by others, as well as footage from a local 7-Eleven independently acquired by her lawyer. (Even this claim was hazy from the beginning, Brown-Dickerson says, since a parking officer was initially told Tate-Brown matched the description of a robbery suspect).

Most worrying, however, is the way in which her son Brandon was killed. The official story has it that he was attempting to get back into his car to grab a weapon, and that he was shot while opening the passenger-side door. But at the end of the video, she says, “I saw my son fall face down in the street behind his car. The cop opened the [passenger] door and left it open the whole time. My son never made it to the right side [of the car].” She argues that when the police inexplicably screened the video for clergy before even she had seen it, this part was left out: “that’s the part I want the public to see... So that’s a lie, you’re telling a lie and backing it up with lies… If you told one lie, if you tell two lies, if you tell three lies, why should I believe you’re telling the truth at the end?”

At best, and even according to their own account, Philadelphia police shot Tate-Brown in the back of the head outside of his car while allegedly reaching for a gun inside—in other words, he was unarmed. At worst, there was no reason for the stop, no demonstrable threat whatsoever, and the existence of a gun simply provided a retroactive pretext to cover up yet another police killing. District Attorney Williams doesn’t strengthen his case when he repeatedly deflects attention to the claim that the gun was illegal, which even if true has no bearing whatsoever on the decision to use deadly force. And none of this, needless to say, explains why Ramsey still refuses to either name the officers involved or to release the allegedly damning footage of Tate-Brown’s death.

In a bizarre post hoc argument, Ramsey has even pointed to the Lawncrest scuffle as a bizarre post hoc argument for why the names of the officers couldn’t be released, but protesters see this as turning the perpetrators into victims. For Tate-Brown’s mother Tanya, “What I think [Ramsey] means is he doesn’t want to embarrass their families. So humiliate us and not them? It’s okay for us to face danger and not them?”

And the victim becomes a perpetrator in the posthumous smearing of her son as an attempted murderer: “My son protected the underdog since he was a teenager. I would tell him that he can’t protect everyone. In the end he didn’t even protect himself, although honestly, I wish he had. He’s not the monster they’re making him out to be. You can’t turn him into anything but what he was, and shame on you for trying.” To which she adds, pointedly: “Are we all ‘We the People’ or is the Fraternal Order of Police ‘We the People’?”

Brown-Dickerson watched the videos from the Lawncrest town hall, and didn’t see the violent protesters the headlines would suggest. “I approve of what these activists have done,” she tells me: putting Philadelphia police on the national radar not for Ramsey’s misleading reports about “new” policing, but for the brutal continuities of the present. If anything, her son’s death has provided a sort of painful rebirth: “I now know what my calling is—I’m a grieving mother right now, but I will be an activist. It’s not only about my son, it’s about modern-day slavery.”

For her part, Morgan Malachi agrees: “They think we’re just focused on Brandon Tate-Brown so we’ll just shut up. No, this is a Black lives matter movement, a Black liberation movement, and if you can’t tell us who killed Brandon Tate-Brown then you can’t tell us who killed anybody. Until we get what we want from the system as a whole we’re not going anywhere.”

George Ciccariello-Maher teaches political theory at Drexel University in Philadelphia, having previously taught at U.C. Berkeley, San Quentin State Prison, and the Venezuelan School of Planning in Caracas. He is the author of We Created Chávez: A People's History of the Venezuelan Revolution, Decolonizing Dialectics, and Building the Commune: Venezuela's Radical Democracy. Follow him on Twitter @ciccmaher.