Rise of the utopian police state: How the unlikely triumph of Singapore transformed the world overnight

New York, Miami, London, Tokyo: All of them taking inspiration from a nation with a troubling human-rights record 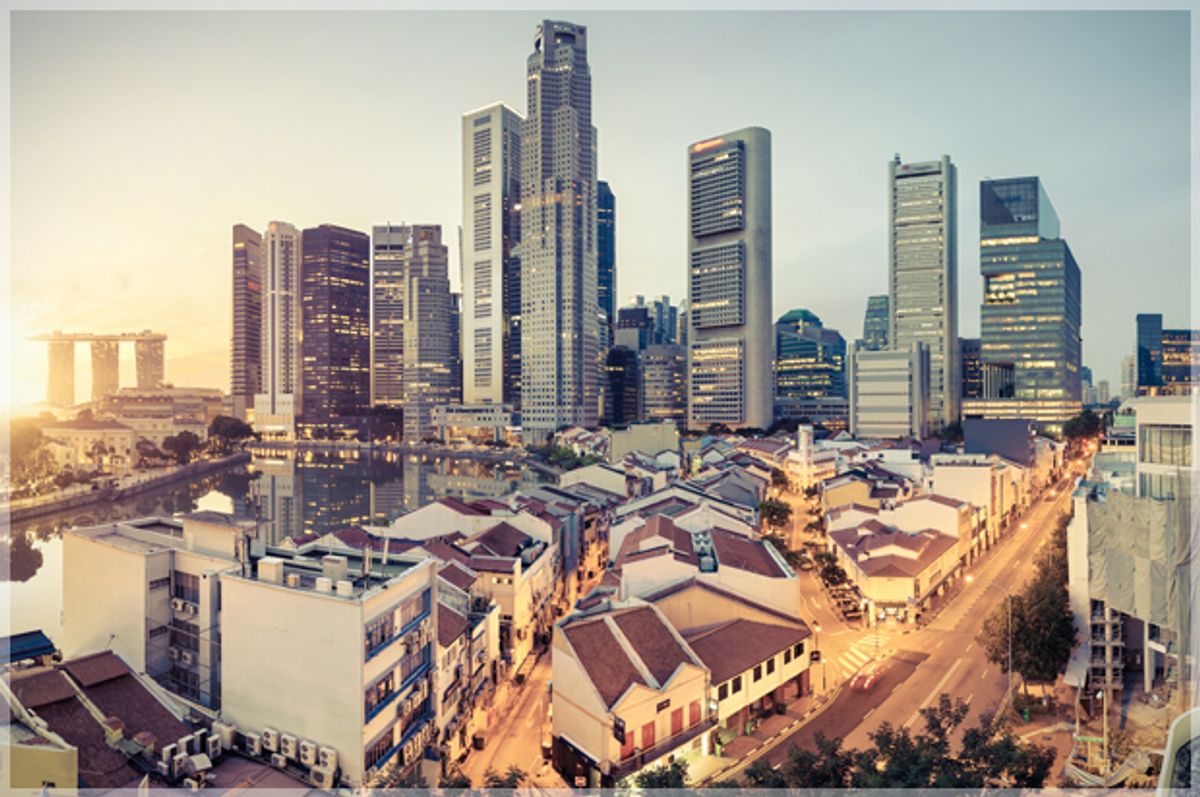 The legacy of Lee Kuan Yew, the founder and longtime leader of modern Singapore who died on Monday, is often framed as a lesson in nation-building and global statecraft. In the Los Angeles Times, Harvard's Graham Allison recalls that every Chinese leader since the death of Mao has cited Lee as a mentor; Lee’s brand of “authoritarian capitalism” is often invoked with reference to Narendra Modi or Vladimir Putin.

But if Lee broke bread with presidents and premiers, his 277-square-mile fiefdom had virtually nothing in common with their countries. With slightly less territory than New York City, Singapore is a hybrid polity whose influence extends at least as far over cities as states. No place casts a longer shadow over modern urban policy and development. With its international focus, favorable business climate, and restrictive, paternalistic style of government, Singapore is the paradigm for how a city can wield power in a globalized world.

It is hard to deny the Singapore Miracle. In 50 years, Lee and his successors transformed the country from a poor trading post with a tenuous geopolitical position into a gleaming and fantastically rich metropolis. Gross domestic product per person rose from under $500 in 1960 to over $55,000 today, making Singapore one of the wealthiest countries in the world.

As a city, Singapore routinely tops world rankings. It recently placed fourth in the Global Financial Centers index; it is the best city for “transportation and infrastructure,” according to PricewaterhouseCoopers; the best place in the world to do business, according to the Economist Intelligence Unit; in a virtual deadlock with Hong Kong for first place in the 2015 Index of Economic Freedom. And so on.

But if money is free in Singapore, people are not. Speech, expression and assembly are all tightly controlled; the justice system is notoriously harsh. Migrant workers are treated poorly; labor organizers are deported. There is no minimum wage, and the Gini co-efficient for inequality is among the highest in the developed world.

For decades, critics warned that this balance could not hold. In the early '90s, Christopher Lingle, a university professor forced to flee Singapore after publishing two critical opinion pieces in the International Herald Tribune, cautioned that economic growth was not consistent with political oppression.

But not only has Singapore since grown economically; its prestige has grown commensurately. This year, the island welcomes a new undergraduate campus of Yale University, that 300-year-old institution’s first satellite. How an American university dedicated to open discourse can thrive in a police state remains to be seen. But Yale's commitment, and its willingness to sacrifice its ideals for a prime global location, is a powerful vindication of Singapore’s strategy.

In many respects, Singapore presaged the modern era of cities. In 1972, long before the term became a byword of city halls and conferences, Singapore’s foreign minister had pinned the state’s survival to its ability to become a “global city.” Like the trading ports of the Hanseatic League, or the powerful Mediterranean city-states of Venice and Genoa, Singapore proved that having no territory was no obstacle.

Free trade and export zones weren’t invented in Singapore, but they were perfected there. Tax incentives and low labor costs pulled in industries and multinational corporations, making Singapore the No. 1 location for multinationals’ headquarters in East Asia. “Few communities on earth roll out the red carpet like Singapore, Inc.,” Bloomberg reported — and indeed, most are still playing catch-up.

Observers have long said Singapore more closely resembles a company than a state; today, the corporate approach to city-building (maximizing growth, minimizing civic involvement) is in vogue, from the “Charter Cities” project to the opinion pages of the New York Times.

Singaporean urban management strategy, technocratic and moralizing, has also resonated in the West. The city’s congestion pricing plan, for example, dates from 1975, and inspired London’s own initiative. Singapore was a “nanny state” long before New York; casinos were legalized in 1994, but Singaporeans and permanent residents must pay a sizable fee to enter (over $1,000 a year), and some 30,000 people with various financial problems are prohibited from coming in at all.

Finally, Singapore also foresaw the rise of tourism and the growth of the international cosmopolitan class. The government-engineered Marina Bay redevelopment, for example, was designed “to make Singapore a great city to live, work and play in” before that tri-pronged expression became the mantra of outward-looking cities like Miami. No place on earth, save the vastly larger megacities of Tokyo and London, attracts more “ultra-high-net-worth” individuals (over $30 million); last year, the EIU named Singapore the world’s most expensive city to live in.

Lee (like Michael Bloomberg, who won the Lee Kuan Yew World City prize) defended what local critics have sometimes perceived as a set of policies that prioritize foreign money over local well-being. “Never mind your Gini coefficient,” he said in 2009, “If you don’t have a job you get zero against those with jobs."

Singapore pioneered the new role of the metropolis, as an internationally competitive entity conducting its own foreign relations, supplanting or adjusting the authority of its nation-state wherever possible.

So it is that Tokyo now has a “Basic Strategy for City Diplomacy,” and the Governor of Tokyo visited eight international cities — Sochi, Bejing, Seoul, Tomsk, Moscow, Incheon, London and Berlin — in the ten months after his election last year. Mayors from Philadelphia to Christchurch routinely take trips to encourage foreign investment. Even Michael Bell, the mayor of tiny Toledo, Ohio, made four trips to China in his four years in office, to promote Chinese investment in a new waterfront district.

Singapore wasn’t responsible for globalization, of course, and all the challenges and opportunities it posed to other cities. But because its response was so early and so effective, it’s not an exaggeration to speak of “the Singapore model."

In a sharp essay on the subject, the Singaporean sociologist Chua Beng Huat relays the scope of two government-owned planning firms that consult cities across Asia and Africa. One of them, Jurong International, specializes in industrial parks and has supervised more than a thousand projects in nearly 150 cities in 37 countries. Another, Surbana, peddles a more general urban expertise in constructing whole districts in China, India, Vietnam, Malaysia, the UAE, South Africa and elsewhere. At the level of architecture and infrastructure, Singapore’s confidence is such that its exhibition at the Venice Architecture Biennale of 2010 was called “1,000 Singapores.”

Like a model in a magazine, though, Singapore has always been unattainable; a utopia hovering beyond the reach of meager municipal powers. What other modern city can, for example, nationalize vast tracts of land for public housing, relieve the federal tax burden for certain companies, or set its own immigration quotas? There is no “modeling” Singapore, Chua writes, but rather “a process of fragmentary borrowing.

That’s not to say that other cities haven’t tried to seize state power. American cities have attempted, for example, to fashion more regionally focused immigration policies that are sometimes in open defiance of federal policy. Michigan Gov. Rick Snyder has proposed issuing 50,000 U.S. visas for highly skilled workers —as long as they live in Detroit. San Francisco and Los Angeles have both decided to issue identification cards to immigrants regardless of their legal status. The New York City Council is currently drafting a bill to allow non-citizens to vote in local elections.

Nevertheless, imitating Singapore remains a piecemeal affair. Cities rip pages from its catalog of “best practices” where they can. A little suppression of labor power here; a tax break there.

At times, the result is a distortion. So it happens, Chua recounts, that the architecture of Singaporean residential planning has been exported throughout the region. But without a government-supported universal housing program, those same Singapore-style developments, once symbols of the state’s commitment to housing rights, wind up functioning as “upper-income privileged enclaves.”