I was the one on your plane with the flu

Each time I coughed, the passengers looked at me like I'd cut them off in traffic. Perhaps they'd like some Purell? 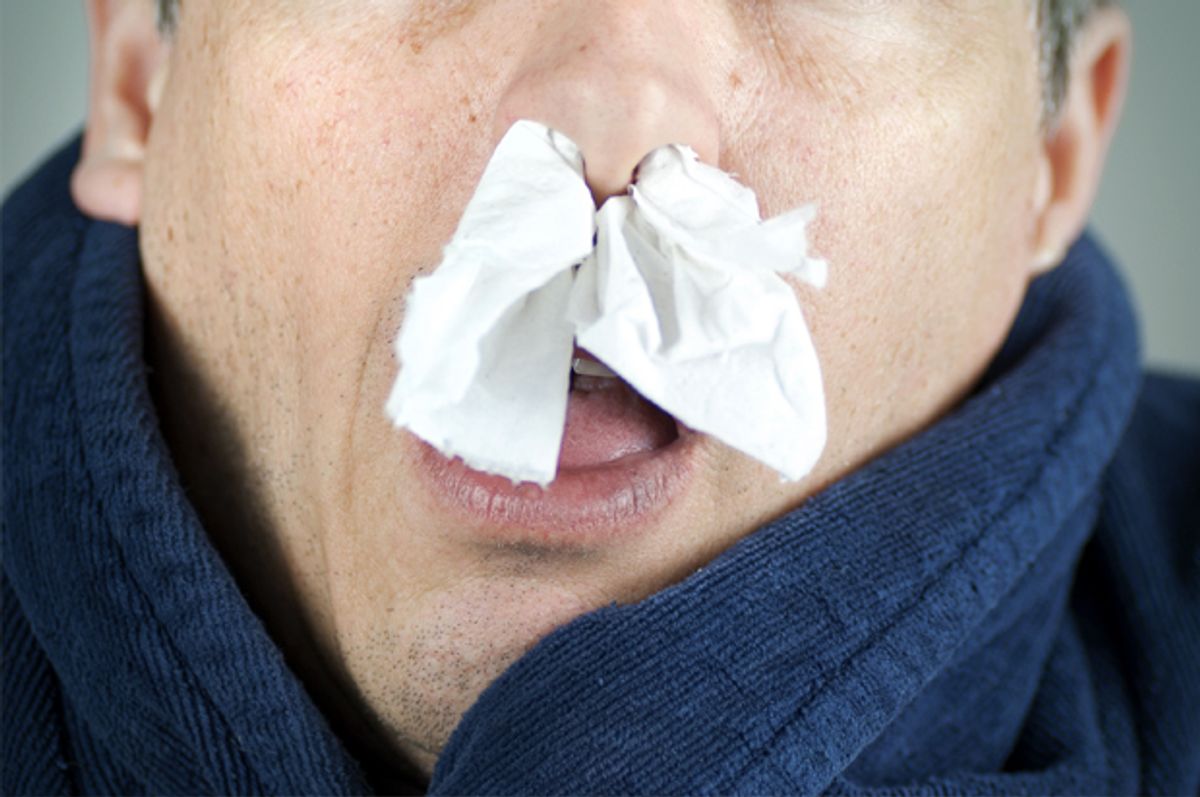 Over many years of relative health, I'd grown inexplicably cocky toward influenza. I didn't quite shake a clenched fist toward the sky and scream, "Come and get me!" at infected stool samples, but the sentiment was there. Flu shots were for easily panicked amateurs. I'd instead built up a natural immunity through high levels of IDGAF punctuated by occasional bouts with germophobia. My expectations each winter were that I'd catch a cold for three to five days, with a possible repeat episode two weeks later, but nothing further. And then it happened, as suddenly as one of those ominous illnesses that signal a character is about to be written out of a soap opera.

It started out as the standard tomato-soup-and-Netflix illness. I felt like garbage, sure, but there was no trace of, you know, diarrhea, which I'd come to consider the Pearl Harbor of health assaults. One night, though, when I was literally shaking in bed, my girlfriend suggested I just might have the flu. I rejected the idea out of hand. No way. Couldn't be the flu. Would a flu-ridden adult be so bereft of diarrhea? She asked what symptoms I did have, and my spirits sank as I rattled off the list: leaky nose, scalding forehead, tonsil-rattling coughs, skull-crusher headaches, and also the sheets were slick with sweat even though I apparently felt cold enough to shake like a leaf. "Those are the exact symptoms of the flu," she said. So, yeah, it was the fucking flu. And at the worst possible time, too.

My sister's engagement party was two days and 1,000 miles away. It was the kind of event that might ordinarily rate as skippable, all things considered, but my sister happened to be moving to the hinterlands of Alaska the day after the party, where I wouldn't see her for a long, long time. It was a serious ethical dilemma. Would I be a worse person for canceling the flight and missing my sister's last night in the lower 48 states—or for potentially gifting all of her guests with my pathogens?

A joint study between the National Foundation for Infectious Diseases and the Emily Post Institute found 81 percent of people agree that anyone stricken with influenza should cancel all social obligations and basically lead a monastic existence until no longer contagious, probably while wrapped in a fluffy blanket like a breakfast burrito. However, this collective fear seems pitched toward the worst-case scenario Lt. Frank Drebin of communicable diseases—a walking calamity unwittingly infecting everything in its path. If a person were demonstrably conscientious the whole time, perhaps nobody would get too riled up about it. With enough medication and the right attitude, not only could I potentially not spread the flu, I might escape notice entirely. Or I might not.

Make no mistake, none of the passengers on an airplane appreciate how much prep you put into protecting them from your sickness. The second you cough into your elbow and hose down your hands in Purell, the entire fuselage looks filled with people who have itchy "ejector seat button" fingers. Obvious tourists and Business Dads alike craned their necks to see my face, the way you do when someone cuts you off in traffic. "Sorry," I wanted to tell everybody while dousing them all with Purell. "I'm a little flu-ish, and I hate that I'm here with you just as much as you do." They didn't seem like they'd care, though. It mattered not that I longed to be on their side, united in annoyance at whatever was plaguing us on this flight.

As if the disincentive of being the plane pariah weren't enough advertisement against future air travel in the unlikely event of a flu, there's also a natural physical deterrent. As it turns out, sinus infections don't react very well to fluctuations in air pressure. I was prepared for the standard ear-popping when we began our descent, but not for every discrete muscle in my ear canal to light up like a pinball machine. I buried my head between my knees and gritted my teeth. My girlfriend asked me what was wrong and I couldn't even talk. Then the pain spread to my eye socket and I gasped. It felt like something was going to happen! To my face! All that happened, though, was that by the time we landed, I'd aged 15 years and I was deaf in one ear.

The copilot was greeting passengers on their way out, so I explained the situation and asked him how long until my hearing returned. He said it might take a couple days, and sarcastically thanked me for flying with the flu. I kind of wanted to explain the selflessness of this particular act and the measures I'd taken to prevent spreading germs, but instead I went to my father's house and started drinking like I'd just returned from war.

Before the party the next day, I ingested an entire CVS shelf's worth of nuclear-grade decongestants, antihistamines, mucus thinners and headache pills. My pockets were stuffed with reams of tissue, even more Purell, and backup drugs for when the drugs I was on wore off. I was ready.

I tried to get out in front of the flu in a way that had seemed inappropriate on the plane. "Hi, I'm the bride's brother and I'm so sorry but I have the flu," I said to several people I would one day be related to by the sanctity of marriage. From their responses, I gathered I was now coming across like a convicted sex offender on a court-mandated mission to inform the neighbors of my sins.

It was a good thing my hearing had returned because now I could fully absorb every time someone told me to stay far away from them, in a joking tone that was not at all a joke. Other people were even more straightforward. Their faces would fall at my announcement and then they'd simply state as a matter of course, "I don't want to get sick." For every person who accepted an elbow high-five, two more acted as though I tried to vomit blood directly into their mouths like the infected in “28 Days Later.”

There are only so many times people can treat your very presence as a hostile act of aggravation before you begin to internalize their reactions and think, "Yeah, maybe I am a huge piece of shit for going out in public like this."

As the party went on, though, I felt more at ease with my choices. My sister seemed overjoyed that I'd flown in, despite my obvious impairment, and her positivity countered the net effect of all those people who seemed to wish I'd died of consumption. Furthermore, some of the guests had even warmed up to me. I kept my healthy girlfriend by my side as a hale and bright-eyed coal-mine canary attesting to my lack of contagion. When she dabbed at my runny nose while I was in the middle of a story, people seemed to think we were "sweet," rather than "disgusting." Just about every such moment, though, was interrupted by orgasmic pre-sneeze face-flutters and me dunking my head into my shirt and running outside for a coughing jag—only to catch the ire of people partying in the backyard. "Hey," someone always said, "don't get us sick now, haha."

People are inherently selfish, and that includes me. Despite what I considered altruistic reasons for interstate air travel, it was true that I was not concerned with the greater good. As much as I wanted to believe that the people cringing at my presence were being uncompassionate, they were not wrong for giving me nasty looks. I was a bothersome thing that was happening to them. Perhaps they were slightly surprised days later when they turned out not to get sick, but more likely they forgot about me forever immediately. Either way, it wasn't reasonable to expect them to be soothed by the mere sight of me sneezing very carefully or guzzling pills.

While flus can be supernaturally persistent, this one had already wound down by the time I was heading home the day after the party. I'd loaded up on even more meds than before, but I still dreaded our descent. Knowing firsthand how sinus infections respond to air pressure only made me sweat the possibility that much more. I knew exactly what could happen, and I accepted it as inevitable, and I braced myself for the head-in-a-vice-grip pain. I was as scared of it as people were of me when they saw my chapped red nose coming. Even though the pain never arrived, afterward I didn't feel the fear had been misplaced.

It’s been only one cold and flu season since that descent, and I haven't encountered any sick people on planes yet. The next time someone has the flu on my flight, though, it will not be me. Never again. Whenever it happens, I look forward to rejoining everyone else on the home team in expressing our collective disgust together.