Matthew Weiner on "Mad Men" and the Jewish experience: "It’s the same story as Don’s identity" 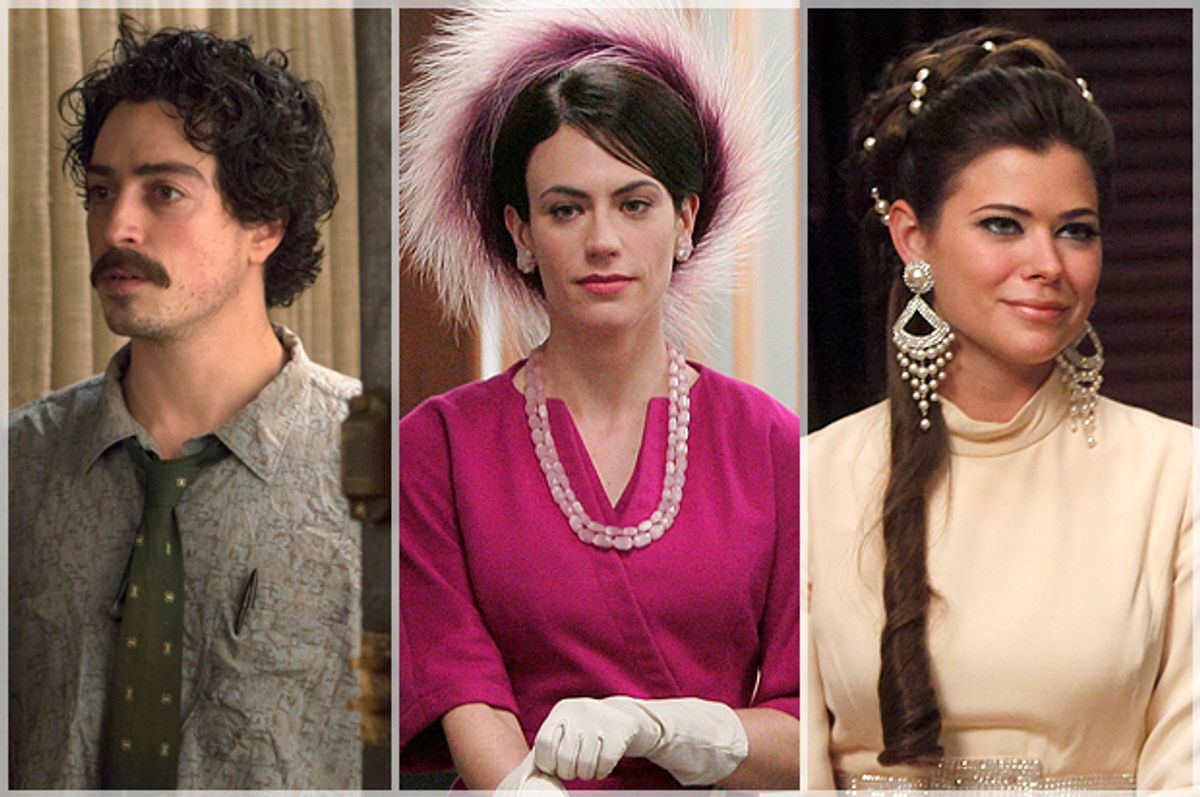 This weekend, "Mad Men" creator Matthew Weiner sat down with New York magazine film critic Matt Zoller Seitz at New York’s Museum of Jewish Heritage -- which is presently hosting an exhibition called "Designing Home: Jews and Midcentury Modernism" -- for a discussion about how the show tells the story not just of the rise of the advertising industry, but also of "a generation of Jews coming into their own in postwar America."

For a show that spans 92 hours and is created by a Jewish writer, the Jewish characters are rather few and far between; still, it’s a tribute to the richness of "Mad Men" that Seitz and Weiner's two-hour discussion only began to skim the surface of this tertiary theme, which in turn brought up far-reaching ideas about prejudice, history and how the depiction of Judaism is tied to the experience of other minority groups depicted on the show.

“I don’t like sweeping generalizations about the show, but if you want to say it's the story of how we all feel like outsiders, absolutely,” said Weiner (who joked that “the only insider in this whole thing is Roger”). Throughout the evening, Weiner repeatedly emphasized the horizontal experience of marginalization; as he put it, “That [assimilated Jewish] identity is the same story as Don’s identity — how do we become white, how do I get my kid to go to Wesleyan so he can be in that line, what’s it going to take?” (Wesleyan, by the way, is where Weiner went to college.)

Here are some of the other fascinating ideas that came up:

It can be tough to remember at this point, considering the number of mistresses Don has had, but one of his first extramarital relationships on the show was with Jewish department store heiress Rachel Mencken. Right from the get-go, her presence was a way for the show to explore the racism that was such an integral part of everyday American life. (As Pete Campbell observed in the pilot: “Adding money and education doesn’t take the rude edge out of people.”)

“The Jewish part of it, the female part of it, all of it was basically to establish the segregation, even in New York City,” said Weiner (who also reminded the audience that one of the early lines in the pilot was Don telling Rachel, “I’m not going to let a woman talk to me like this.”) Weiner explained that Pete’s line about “adding money and education” is something that he heard said in front of him as a child, growing up assimilated in a predominantly non-Jewish community, and that he wanted to show that this sort of "casual" racism can still be deeply harmful. “It is institutional, and it is villainous, and it is a separation," he said. "And being of color, there’s no way to cross it.”

Explaining his desire to include a strong Jewish woman like Rachel in the show, he pointed to the fact that the generation of self-deprecating Jewish comedy writers that grew up inspired by Woody Allen and "Annie Hall" in particular was “really hard on Jewish women. And I just thought, let me show you somebody who reminds me of the women in my life, and my parents, and let's see that generation that really, really put it out there on the line there, and they’re quite conscious of what's going on. And they’re still women underneath. ”

On the parallels between Rachel and Don:

Through Rachel — who self-identifies as “American and not very Jewish” — Weiner was also able to explore a certain sort of culturally assimilated Jewish identity that was common in the 1960s, and the difficult balance that Jews had to strike between blending in and maintaining their identities. As he put it, “wherever that cultural line is, Rachel’s checking in with us on this line.”

In a lot of ways, he sees parallels between Rachel and Don, in their drive to shed their pasts and write new success stories for themselves. “I love that Don is striving for the same thing, they’re both there with their fake success suits on," said Weiner. "They’re both one generation away from living without plumbing ... it’s the story of the 20th century, and that's what I was interested in …” Talking about Don's back story, he cites figures like John D. Rockefeller and Bill Clinton, who overcame adversity to achieve success. “That family structure, the poverty, the evangelical Christian background -- I have done everything I can to cast Don as what I believe is a hero of assimilation.”

On the "Babylon" episode:

Discussion also turned to Season 1's “Babylon," a pivotal episode when it comes to Jewish themes, which sees Don soliciting advice from Rachel for Sterling Cooper's pitch to the Israeli tourism board. (As she puts it, glibly: "I'm the only Jew you know in New York?")

Weiner had this episode in mind from the get-go. “I was going to make this episode no matter what, if the show got to go. It was something I'd had in mind earlier," he said. "I wanted to show, honestly, the nostalgia of America’s love affair with Israel, which is mentioned in this scene: the blue and white hats and the kibbutzim, and this very positive feeling that I had when I was collecting money. I don’t know if it was America’s problem with Arabs or it was actually their love of Israel as the underdog."

One of Weiner’s goals, he suggested, was to simultaneously remind people of the overlap between Jewish culture and the culture at large, while also pointing out Jews’ non-white status and the sophisticated anti-Semitism that surrounded it — the fact that no matter how much Jews were able to pass, they always remained Other.

“The issue came up when we cast Rachel’s dad; we had a decision to make about whether he would have an intonation," said Weiner. "And I knew he would, but that embarrassed me. The same thing with Ginsberg's dad. It’s sort of like, this is a shtetl stereotype and Jews cringe at hearing it, but you're like: Guess what, that's what they sounded like, that's where they come from. And I wanted to get it right and embrace it as a great transitional moment.”

Discussion then turned to Michael Ginsberg (Ben Feldman), the deranged but brilliant copywriter who ends up going crazy and chopping off his nipples in Season 7. In particular, Weiner addressed Ginsberg's origin story -- he describes himself as "a Martian" and "displaced" as a way of revealing that he may have been born  in a concentration camp -- and what the narrative says about the Jews of this generation.

“The influences here are not just my mother-in-law, who was a child Holocaust survivor, and the idea of how people were integrated back into the culture, and the fact that babies were born there, but also I mean -- Art Spiegelman has had a tremendous impact on telling the story of what it means to become an American, with this as his shadow. And that generation really had to — it’s a tenuous relationship. I mean, Isaac Singer, "Enemies: A Love Story," just the whole idea of where do you belong? And you take that version versus Rachel Mencken's — her dad grows up with a sock store and they end up with Bergdorf's. These are the tales. And that’s the most recent wave. So I thought that gave him his point of view and he probably, we don't know, he's really seriously unbalanced at this point, and I think a lot of the audience thought [the Martian stuff] was a metaphor, and it is a metaphor, but you know that's what he feels like.”

While Ginsberg is a specific and unique individual, Weiner also wanted to use the character to explore a certain vein of absurdity ("this Catch-22 era") he noticed running through late '60s culture as a whole as it related to the Vietnam War: “Why are we still, the most advanced society in the world, why are we bombing this people? Is it the military industrial complex? A million reasons. And I wanted to catch that, the era of that insanity. And paranoia, if you’ll have. And it was built in that the Ginsberg character was mentally on the edge anyway, so it seemed like an appropriate thing to do. People focused on things before technology. Before there was technology, there was a wooden hat, I'm sure, blocking waves for the mentally ill. ”

Seitz pointed out that Ginsberg’s type seemed to prefigure a certain type of Jewish leading man that would become popular shortly afterward — a Richard Dreyfuss type — but also that despite his goofiness, the character has a certain sort of moral seriousness to him. “I always thought of Nathan in 'Sophie’s Choice,'" acknowledged Weiner. "It’s that cliché of mental illness giving you insight, just on the edge of things.”

Weiner said his favorite Jewish joke on the show was when Cooper tells Roger their clients are Jewish, and Roger asks how Jewish they are by saying, “Fiddler on the roof, audience or cast?”

The Manischewitz bus campaign from Season 5 is a real campaign that the company once ran; Erin Levy, who wrote the script, had an uncle who worked on it.

Weiner also addressed early speculation that Don was Jewish, saying the idea was "totally surprising" to him, and that the name Dick Whitman wasn't a reference to Don's poeticism; rather, it was meant to indicate "White man.”