Barney Frank drops a bombshell: How a shocking anecdote explains the financial crisis

Ever wonder why we waited six years to get a decent economic recovery? This new revelation will disgust you 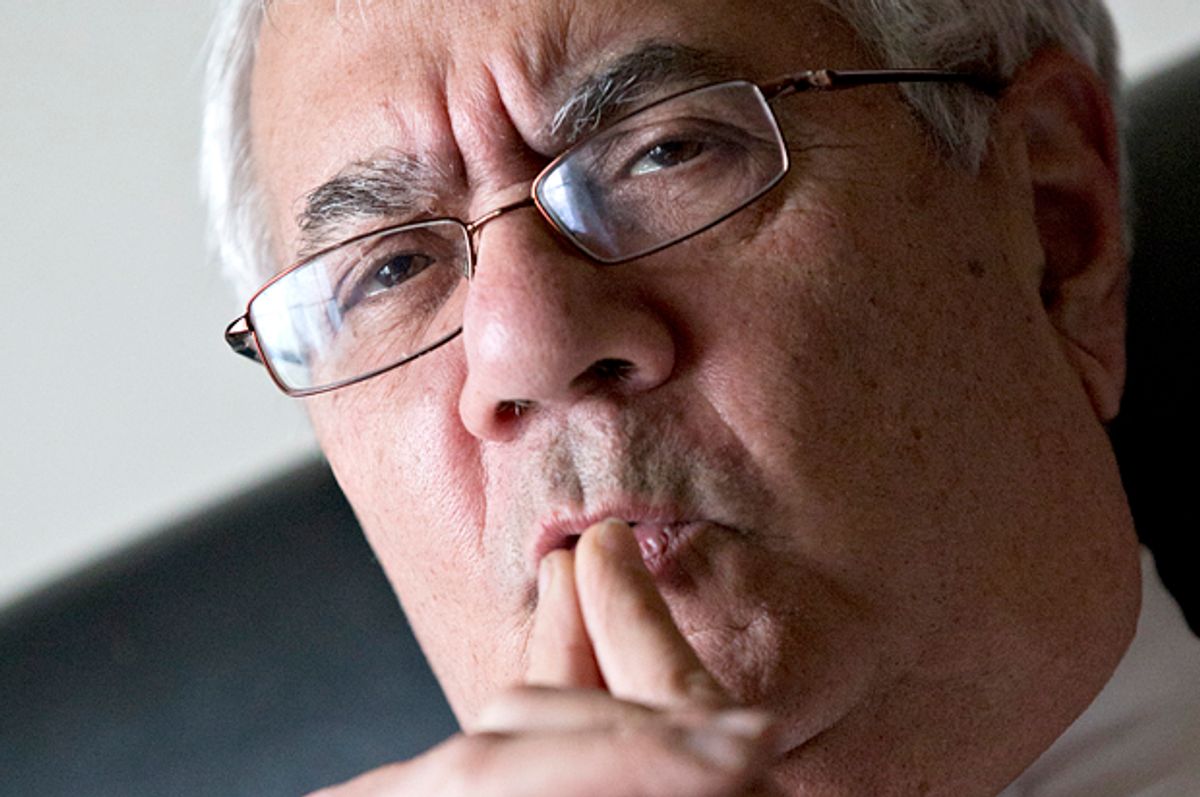 Barney Frank has a new autobiography out. He’s long been one of the nation’s most quotable politicians. And Washington lives in perpetual longing for intra-party conflict.

So why has a critical revelation from Frank’s book, one that implicates the most powerful Democrat in the nation, been entirely expunged from the record? The media has thus far focused on Frank’s wrestling with being a closeted gay congressman, or his comment that Joe Biden “can’t keep his mouth shut or his hands to himself.” But nobody has focused on Frank’s allegation that Barack Obama refused to extract foreclosure relief from the nation’s largest banks, as a condition for their receipt of hundreds of billions of dollars in bailout money.

The anecdote comes on page 295 of "Frank," a title that the former chair of the House Financial Services Committee holds true to throughout the book. The TARP legislation included specific instructions to use a section of the funds to prevent foreclosures. Without that language, TARP would not have passed; Democratic lawmakers who helped defeat TARP on its first vote cited the foreclosure mitigation piece as key to their eventual reconsideration.

TARP was doled out in two tranches of $350 billion each. The Bush administration, still in charge during TARP’s passage in October 2008, used none of the first tranche on mortgage relief, nor did Treasury Secretary Henry Paulson use any leverage over firms receiving the money to persuade them to lower mortgage balances and prevent foreclosures. Frank made his anger clear over this ignoring of Congress’ intentions at a hearing with Paulson that November. Paulson argued in his defense, “the imminent threat of financial collapse required him to focus single-mindedly on the immediate survival of financial institutions, no matter how worthy other goals were.”

Whether or not you believe that sky-is-falling narrative, Frank kept pushing for action on foreclosures, which by the end of 2008 threatened one in 10 homes in America. With the first tranche of TARP funds running out by the end of the year, Frank writes, “Paulson agreed to include homeowner relief in his upcoming request for a second tranche of TARP funding. But there was one condition: He would only do it if the President-elect asked him to.”

Frank goes on to explain that Obama rejected the request, saying “we have only one president at a time.” Frank writes, “my frustrated response was that he had overstated the number of presidents currently on duty,” which equally angered both the outgoing and incoming officeholders.

Obama’s unwillingness to take responsibility before holding full authority doesn’t match other decisions made at that time. We know from David Axelrod’s book that the Obama transition did urge the Bush administration to provide TARP loans to GM and Chrysler to keep them in business. So it was OK to help auto companies prior to Inauguration Day, just not homeowners.

In the end, the Obama transition wrote a letter promising to get to the foreclosure relief later, if Congress would only pass the second tranche of TARP funds. Congress fulfilled its obligation, and the Administration didn’t. The promised foreclosure mitigation efforts failed to help, and in many cases abjectly hurt homeowners.

This is not a new charge from Frank: he first leveled it in May 2012 in an interview with New York magazine. Nobody in the Obama Administration has ever denied the anecdote, but of course hardly anybody bothered to publicize it, save for a couple financial blogs. I suppose those reviewing "Frank" can offer an excuse about this being “old news,” but that claims suffers from the “tree falling in the forest” syndrome: if a revelation is made in public, and no journalist ever elevates it, did it make a sound?

The political media’s allergy to policy is a clear culprit here. Jamie Kirchick’s blanket statement in his review of "Frank" that “readers’ eyes will glaze over” at the recounting of the financial crisis is a typical attitude. But millions of people suffered needlessly for Wall Street’s sins; they’d perhaps be interested in understanding why.

That’s the main reason why the significance of Obama’s decision cannot be overstated. The fact that we waited six years to get some semblance of a decent economic recovery traces back directly to the failure to alleviate the foreclosure crisis. Here was a moment, right near the beginning, when both public money and leverage could have been employed to stop foreclosures. Instead of demanding homeowner help when financial institutions relied on massive government support, the Administration passed, instead prioritizing nursing banks back to health and then asking them to give homeowners a break, which the banks predictably declined.

There were no structural or legislative barriers to this proposition. One man, Barack Obama, could tell another man, Henry Paulson, to tighten the screws on banks to write down loans, and something would have happened. Would it have been successful? Would it have saved tens or hundreds of billions in damage to homeowners? Even trillions? Or would Paulson and his predecessors found a way to wriggle out of the commitment again? We know the alternative failed, so it’s tantalizing to think about this road not taken.

This still matters because, as City University of New York professor Alan White explained brilliantly over the weekend, the foreclosure crisis isn’t really over. Though 6 million homes have been lost to foreclosure since 2007, another 1 million remain in the pipeline, many of them legacy loans originated during the housing bubble. If you properly compare the situation to a time before the widespread issuance of subprime mortgages, we’re still well above normal levels of foreclosure starts.

In addition, over one in six homes remain underwater, where the mortgage is bigger than the value of the home, a dangerous situation if we hit another economic downturn. And up to 4 million homes face interest rate resets from temporary modifications, along with nontraditional mortgages where the rate is scheduled to go up. Home equity lines of credit are also nearing their 10-year limits, requiring borrowers to pay down principal balances. Some Americans have been waiting over five years in foreclosure limbo, which sounds great (no payments!) until you understand the stress and anxiety associated with not knowing if you will get thrown out on the street at any time, something highly correlated with sickness and even suicides.

In baseball terms, we’re in the seventh or eighth inning of the crisis. And Barney Frank detailed how the president-elect had the opportunity to call the game and fix the problem much earlier, which he turned down. You’d think someone would have noticed.