Bill Cosby is not sorry: Under a Nelson Mandela portrait, the accused rapist delivers bizarre jokes to his die-hard fans 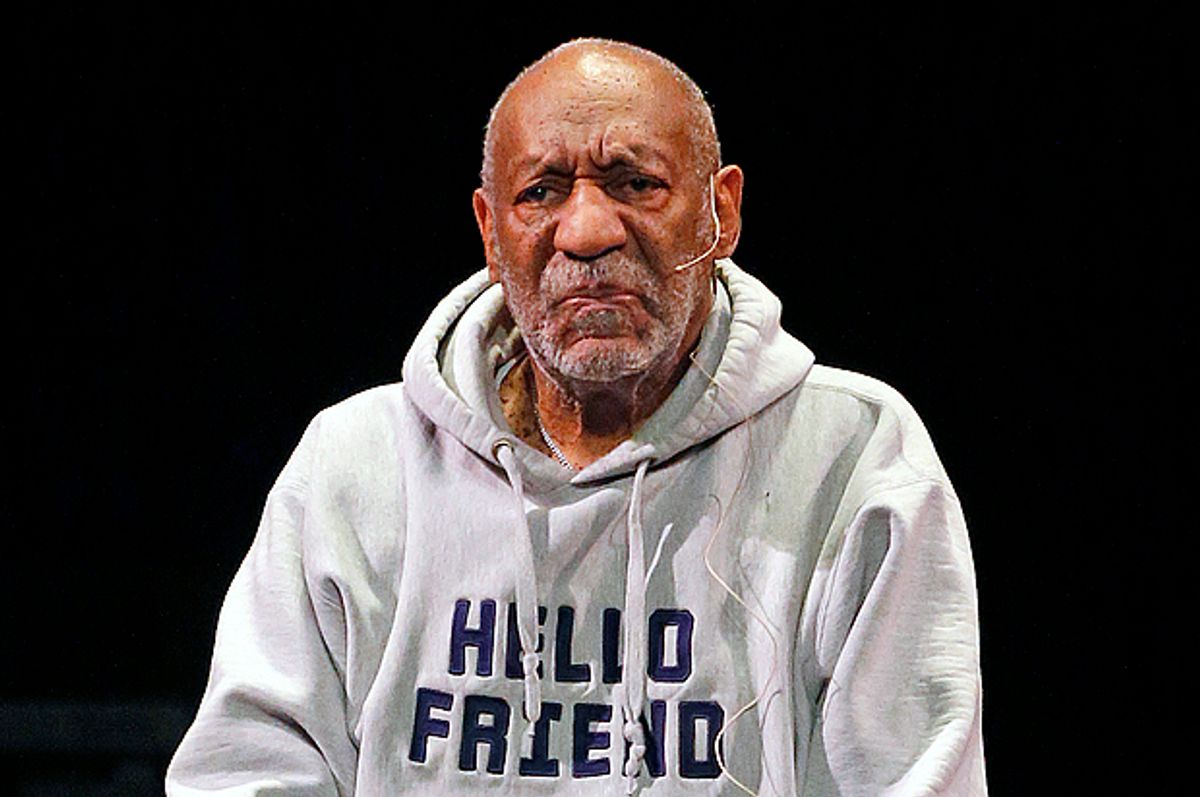 Show up early to a Bill Cosby show these days and you’re met with a strange dichotomy.

A prerecorded message plays on the theater’s public address system, repeating every five minutes. “We have been advised there may be attempts to disrupt tonight’s performance,” the recording, playing just softly enough that you have to struggle to hear it, says. “If a disruption occurs please remain calm until the matter is resolved and do not confront the person making the disruption.”

At the same time, there’s a photo projected onto a screen behind the stage where Cosby will soon perform. It’s the kind of screen and the kind of photo that feel like they should be part of a slide show, but no, there’s just the one photo. Taken in 1997, it’s a picture of a younger, smiling Cosby. He’s wearing a bright red sweater, looking directly into the camera and shaking hands with a laughing Nelson Mandela.

The not-so-subtle subtext seems to be: Forget what you’ve heard, forget the nearly three dozen women and their crazy claims, forget that droning announcement, I’m a good guy. Mandela thinks so.

I saw Cosby perform last week at the Municipal Auditorium in Charleston, West Virginia. There were no disruptions, no protesters, no hecklers. The only hint that the comedian who was once America’s doddering grandfather is now America’s most famous alleged sexual assailant was that prerecorded announcement.

Cosby has been heckled at shows in Ontario and Baltimore this year. Several more have been canceled. But most of his shows seem to have gone off like the one in Charleston: without a hitch. Cosby shuffled onto the stage to thundering applause. A handful among the crowd gave him a standing ovation before he said a word. Ticketmaster’s seating chart said that about three-quarters of the arena’s 3,400 seats were sold. Less than half were filled.

By now, if you’re attending a Cosby show (and you're not on assignment), you basically have decided to actively ignore the women (35 and counting) who have accused him of sexual assault. Cosby, through lawyers, has consistently denied the accusations, and the statute of limitations on most of them has run out. Not surprisingly, almost no one attending the show wanted to talk to a reporter about it. The few that would were untroubled by the flood of sexual assault accusations.

“Absolutely not,” said one man, with disconcerting certitude, when asked if he had concerns.

“We’re never going to hear his side of the story,” said another man. (True, but we could if he wanted to tell it. He’s got a microphone and a rapt audience.) “I don’t know what he’s done in the past, but I do know he’s funny.”

But the thing is, he wasn’t particularly.

The audience disagreed, I am sure, but it was impossible to disassociate the comedian from the accusations. The “HELLO FRIEND” emblazoned on Cosby’s gray hoodie takes on a whole new scope of meaning. Why is he wearing sweat pants, I wondered. That’s weird. The spontaneous applause when Cosby mentioned “my wife of 51 years” seemed a bit too enthusiastic.

He’s not lost the skills that made him the world’s most famous comedian. His bumbling, stammering persona is so familiar and well-honed that he got big laughs even when there was no joke.

“Well now let me tell you about Wheeling,” he said, as the audience roared for no apparent reason. He told a story about his mother washing clothes in an old corrugated steel washtub made in Wheeling, West Virginia. “My mother and father had,” Cosby paused, searching his memory. “Uh, me.” Again, big laughs.

How can the grandfatherly figure who struggles to remember his parents' son be the same calculating man whom dozens of women have accused of drugging and sexually assaulting them? It doesn’t square. But watching him you can’t forget it.

Cosby performed for nearly two hours. He told jokes about being a kid, growing old, fighting with his little brother and marriage. He’s more of a sit-down than a stand-up comic these days. He did get out of his chair near the end of the show, pacing and lying flat on his back, for an extended bit on an acrobatic trick he attempted in old age that ended with the punch line “at least it’s not liquid.”

His vision is very bad, he said, a result of glaucoma. He needed a guide to help him to his chair. He grasped repeatedly, as if in the dark, for a tissue on the table next to him. He did the same when reaching for a glass to take a drink. “I can’t see you all,” he told the audience. That segued into a story about a bat flying loose in his house. “I don’t even know why I told you that,” he said.

After the show, several friends asked me why Cosby is even still performing. Surely he doesn’t need to.  Perhaps it’s because the shows in Ontario and Baltimore are the decided minority. Perhaps it’s because Cosby can still go to a small city like Charleston, West Virginia, and get 1,000 or so people to pay good money ($55 to $80) to hear him tell stories and make references to pudding pops (he made several). Even in Baltimore, the sole heckler was quickly shouted down by the rest of the audience.

No one’s asking questions onstage. There are no accusations. When he finished performing the full audience rose to its feet in rapturous ovation. “We love you, Bill,” people shouted.

“Tell your friends how much fun you had tonight,” he said.

When he’s onstage, performing for a loving crowd that is either willfully naive or just doesn't care, Cosby can pretend to be the guy in the picture again. Making even Nelson Mandela laugh.