"I'm going to spank you now" 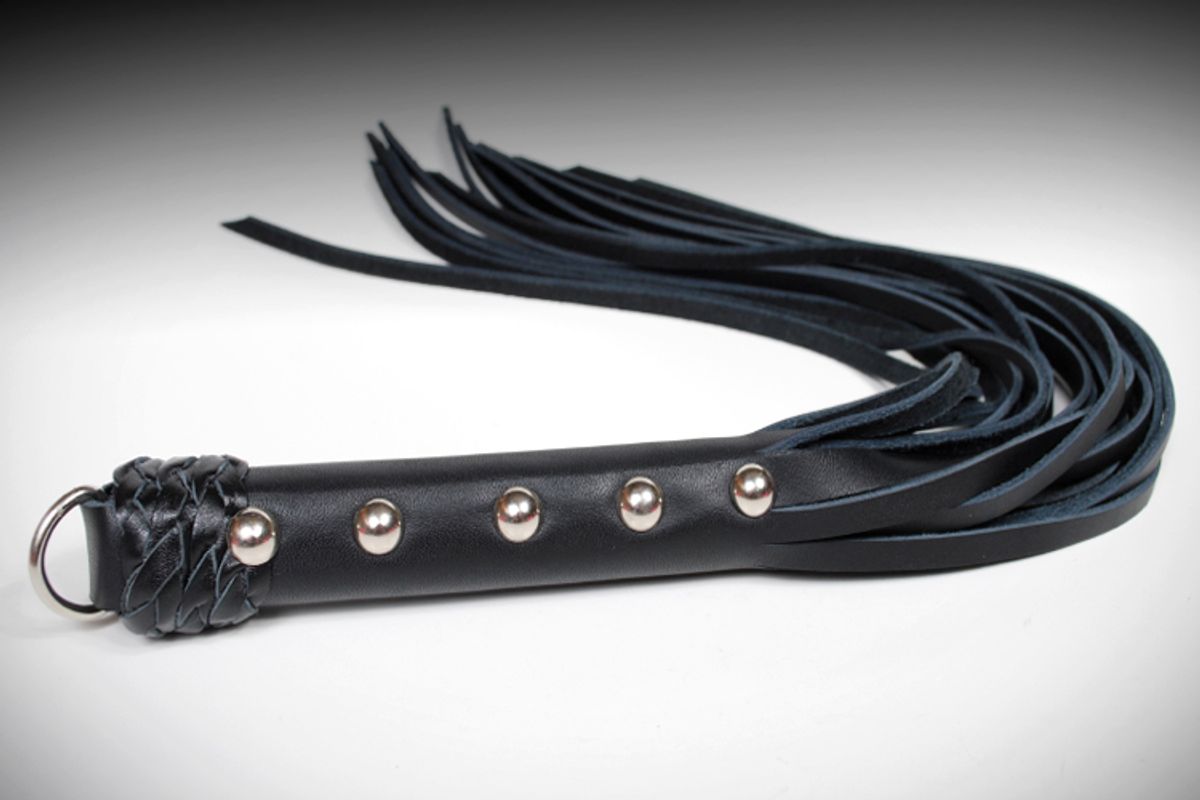 Six weeks after we started dating, I told Emily my secret.

We were in bed, still in those heady, lust-filled days of a new relationship. I really liked her, suspected that I might even love her, which meant I had to tell her the truth about myself. She sat up to listen, and I trailed my fingers over her thigh, eyes down, nervous as a teenager. I was 30 years old and for the first time in my life I was going to tell a girlfriend that I wanted to spank her. No, not wanted to, needed to. And I knew that telling her might mean the immediate death of our relationship, but I also knew we'd never be perfect together unless I looked into her pretty blue eyes and told this sweet, innocent, beautiful woman that I had a spanking fetish.

Let me clarify something: I'm not "into" spanking the way you might be "into" Celine Dion or “The Bourne Identity.” Spanking is a part of my psyche, an essential element of my sexuality. It's not like slavering over cheerleaders, or fantasizing about sex on the beach at sunset. When I was a kid I used to look up the word "spanking" in the dictionary, and I got a visceral thrill when I saw a spanking scene on “Little House on the Prairie” or “I Love Lucy.”

At times, spanking was an obsession, and one made all the more torturous for the shame I felt harboring it. For more than 20 years I thought there was something wrong with me. I thought that if, by chance, someone else felt the same way, then they'd be a dirty old man with a grubby overcoat and bulging eyes. But I couldn't help it. I didn't choose to be kinky in this way, any more than a man or woman chooses to be straight or gay. The way I saw it, homosexuals had their closet and I had mine. Only mine was a lot smaller, and I was the only one in it.

I never told any of my girlfriends about my fetish, although I often made clumsy attempts to engage in spanking play. If they let me, I landed a few gentle slaps to the bottom until I got a curled lip and, "That's just weird. You don't really want to hurt me, do you?"

I didn't, no. Not really, not unless she wanted it, too, and none of them did. The closest I came to telling anyone was Jennifer, the girl I dated right before Emily. She told me it was sick and made me see a psychotherapist who, I found out later, labeled me in her notes as a sexual sadist. Another heaping of shame from my girlfriend, and a horrifying diagnosis from a professional. You can see why I kept this to myself.

The thing is, I was beginning to suspect I wasn't sick. Or, if nothing else, that there were a lot more sick people like me out there. I dated Jennifer during the advent of the Internet, and when she was out of the apartment I'd spend hours in spanking chat rooms or looking at spanking photos. A couple of times I met people, real live girls, who liked to be spanked. I didn't have much else in common with them, but the spanking was amazing. As much as anything, it was the relief of finally exercising my kink with someone other than my right hand and a box of tissues. I wasn't alone!

Jennifer caught me, of course. I'd driven 300 miles to go to a small spanking party in Washington, DC. It was at someone's house, and it was two days of awesome. At one point, I was in a hot tub with a woman who acted in spanking films and the female host, a retired police lieutenant. But as exciting as that was, I wanted to experience spanking with someone I loved. I didn't want to have spanking on the side; I wanted it front and center.

Last November, the New York Times' Modern Love column ran an essay by lifelong spanko (official term) Jillian Keenan, called "Finding the Courage to Reveal a Fetish." As she put it, "For as long as I remember, I’ve been fairly obsessed with spanking. This obsession felt impossible to share, so I was always hungry for cues that someone could relate."

I relate. As a man, though, it's a little different -- we're not supposed to hurt women, we're supposed to protect them. I've never hit a woman in my life, and abhor those who do, including those who emotionally abuse their partners. That's the essence of my shame, deepened by the impossibility of trying to explain it to someone who is not a spanko, someone who isn't wired to understand. As Keenan said:

For me, too. How many of us are there? Impossible to say. In a 2011 article in Salon, Debby Herbenick, a research scientist and sexual health educator at the Kinsey Institute for Research in Sex, Gender and Reproduction, was quoted as saying that no study has ever been done that would give a solid figure on how common spanking is. I can tell you that just one of the many spanking subgroups on the adult website Fetlife contains more than 17,000 members. As for the male-to-female split, I asked Eve Howard. She co-founded of one of the best-known spanking erotica companies in America, Shadow Lane, and has run spanking parties in California and Las Vegas for 20 years. She said: "There are as many women into spanking as there are men, no doubt whatsoever about that."

As time went by, I did find comfort in knowing there were others like me, but as I sat on Emily's bed, they all seemed irrelevant because she wasn't a spanko. I knew that for sure. As with every girl I met, I'd dropped hints, used the word "spanking" to get a reaction. I'd gotten none from her. The only question now was whether she'd call me a freak and kick me out.

I took a deep breath and told her.

I spoke for a while, explaining that I didn't understand why, that the why didn't even matter anymore. Spanking was a massive part of my sexuality, and that was something she needed to know. When I finished, she furrowed her brow.

That was 14 years ago. We married a year later, and our sex life today would shock the neighbors. Once or twice, when we've forgotten to close the bedroom window, I suspect it has. It's not been plain sailing, though, and this isn't the end of the story because a kink is a powerful beast. The hardest thing has not been the play; when turned on, Emily can take an almighty spanking, and a caning that would make an English schoolboy squeal. She likes it so much that we now call her "vanilla, with sprinkles."

No, for her the problem has always been understanding my need to connect with other hard-wired spankos. I've explained that not everything about spanking is sexual and that wanting to meet, talk to and even play with others doesn't reflect one whit on my love for her. But again, it's the unanswerable Why? question. Why isn't she enough? Why would I need to spank someone else, if I didn't want to sleep with that person?

As ever, the "why" question can't be answered. And as ever, Emily and I talked it out and decided to explore the local spanking community together, hand in hand. We took our first step on an October night, when we parked on a quiet Austin street at dusk and headed towards the sound of clinking glasses and gentle laughter.

Our first Underground Spanking dinner party. Organized by a bubbly redhead known as Chef Steel, these parties feature three-course meals paired with wine, served on china and crystal by respectful staff who glide about ensuring the guests' needs are attended to.

A server approached us, a pretty young lady no more than 20 years old. Her name tag said, "Melanie," and with a polite, almost shy, smile she asked what we'd like to drink.

With that question, I became nervous. Nervous for her. I knew the rules, they'd been emailed to everyone before the party, so no doubt she did, too. And they were very strict: if she messed up our order, spilled one drop, or even let our glasses go empty, she'd get a spanking. Right there in front of everyone.

And then I became nervous for me: would I have to administer it?

I asked for a beer. In the bottle. "Happy to open it myself," I said. She looked at me as if I were weird.

Drinks in hand, Emily and I began meeting people. We didn't talk about spanking, not until much later. But just being around them, being out, was liberating. These were people like me, who in this post-50 Shades era, had nothing in common with the vanilla couples toying with handcuffs and blindfolds, making up safe words and buying heart-shaped paddles. These people were true aficionados, who'd wielded (and felt) those paddles, as well as hairbrushes, floggers and straps, for years. They knew that the technique for caning is different from the one you use to crop. They knew about role play, "domestic discipline" and aftercare. And their spanking implements weren't heart-shaped, because these people weren’t just playing at it, they were hard-wired like me.

The evening seemed secretive and subversive, in an exciting way, and I asked several people if they thought that spanking might be the next thing out of the closet.

"To some degree, it's already coming out," said Allison, a teacher. She went on to list a spanking scene in “Weeds,” at least one in “Californication” and a scene on “The Big Bang Theory” when Sheldon spanked Amy. Even a spanking on “American Dad.” Modern, mainstream fiction, too, spills examples of spanking: Alan Furst's best-selling books make saucy mention of it, as does Mark Pryor's recent best-selling novel “The Bookseller,” and at least two Dick Francis novels. "But," Allison added, "people who don't get it often don't want to get it. They ignore the fact that it's all consensual and just see it as abuse. But look around, judge for yourself."

She was right, abuse had nothing to do with the fun that my wife and I watched. All we saw was openness and acceptance, a group in which a professional woman can go over the knee of a handsome man (and vice versa, actually) and everyone is happy for both of them. As for whether it will come out of the closet, time will tell. In the meantime, if you hear a clapping sound and a few squeals and giggles emanating from the neighbor's place, there's a decent chance they're not watching sports.

I would dearly like to come out of the closet, just like Jillian Keenan did. Maybe I'm just not brave enough, but another truth is that I don't trust the reception I'd get from colleagues, friends or even strangers. I can take friendly ribbing and even a dab of mockery, but I don't think I can subject my wife to those things. I need to add to those sprinkles, not knock them off.

In the meantime, I’m grateful she’s been so game. Later at the dinner party, our naughty server Melanie dropped a dessert spoon into my lap, and it was too symbolic to ignore. So yes, I spanked her. And my darling wife raised Melanie's crisp little skirt for me.

Jason Webb is the pen name of a novelist and freelance writer in Austin, Texas.