My "Fast and Furious" love: Vin Diesel, Paul Walker and the raw, turbo-charged soul of "Furious 7" 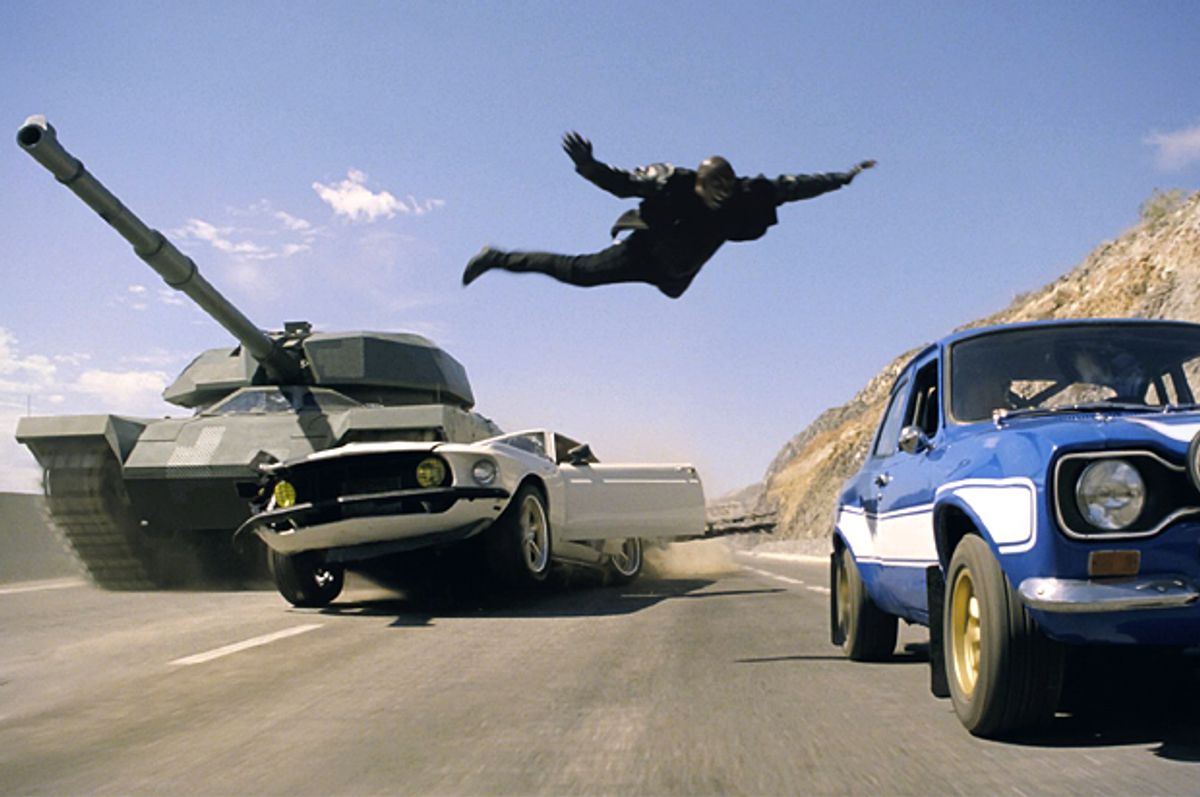 This weekend, “Furious 7” will mark the end of a particularly epic narrative arc that has spanned 14 years. That isn’t to say the “Fast And Furious” movies—starting with 2001’s “The Fast And The Furious”—won’t find a way to produce an eighth, ninth, or even tenth installment. But “Furious 7” will definitively be the last film to tell the story of the unlikely friendship between Brian O’Conner (Paul Walker) and Dominic Toretto (Vin Diesel). Walker died in 2013, midway through filming; he was just 40. When the movie posters for “Furious 7” read “ONE LAST RIDE,” they mean it: This is the final hour of Dom and Brian, friends and then brothers despite many, many differences.

Walker’s death has thrown “Furious 7” into bright, painful relief; a franchise built on family and togetherness and survival at all costs has a gaping hole in it, now. Unexpectedly, “Furious 7” became, during its production, a mausoleum, a memorial, a eulogy. Sixteen months after he died, Walker’s image is still preserved on the screen, his voice is still recorded in the audio track. For fans of the series, “Furious 7” is how they will mourn Walker, whose entire career became the franchise, after a few short stints in similarly middlebrow films. [The cast of the films have been publicly broken up about Walker’s death—just yesterday, Diesel broke down in front of cameras, shortly after announcing that his third child would be named Pauline, after his friend Paul. Michelle Rodriguez told the Daily Beast that she went into an emotional tailspin after Walker’s untimely death. The studio unequivocally paused production to mourn for Walker, and director James Wan put together a stunning tribute to the actor in “Furious 7.” It seems that this film is making his loss real for the cast and crew as well as the fans.]

The series itself has to pause and take stock, and figure out what it’s all about—a reckoning these films have had to do numerous times before. The “Fast And Furious” franchise started as a story about street racing amongst the most marginal of populations and has turned into a story about an elite squad of fast driving superheroes. It’s changed writers, directors, and producers; for a significant period of time between 2001 and 2009, it also changed casts; Diesel, Walker, and co-stars Michelle Rodriguez and Jordana Brewster both took significant breaks from the films (though Walker, notably, was the most loyal to the franchise). Now—just as they’d managed to mostly get the band back together, as Rodriguez’s Letty had been rewritten into the story and reunited with the rest of the team—the series will have to try its hand at some new iteration of itself.

Undoubtedly, it will succeed. If there is anything this franchise has proven, it is the versatility of its premise—which is namely, that whether you’re a good guy or bad guy or in-between guy, you’re gonna have to get from point A to point B somehow. And if you wanna do it quickly, with style? You better have a cool car and know how to drive it.

This basic principle, this raison d’etre, has guided this franchise from nameless suburbs of Los Angeles to the beaches of Rio di Janiero, the crowded streets of Tokyo, and even, in “Furious 7,” the skyscrapers of Abu Dhabi. It has taken the characters through a lot of scripted heartache, too. “Furious 6” saw the demise of Han (Sung Yang), a death loyal fans knew was coming, and the death of Gisele (Gal Godot), which no one saw coming. It will survive Walker’s death, because tragedy and love are part of the series’ DNA.

I cannot entirely explain why I am so emotional about the “Fast And Furious” franchise. There is the likely combination of nostalgia and timing; “The Fast And The Furious” hit me within a few years of when I started driving, so car culture seemed especially relevant. There’s also what so many critics have expressed so well about the series—it makes a place for women, for minorities, for any number of languages and multiple continents. There is, without a doubt, some cringeworthy dialogue, some gratuitous objectification of women, and very, very long action sequences—but then again, all of that is forgivable in the “Fast And Furious” franchise, because that cheesiness is part of the series’ unpretentious core. Dom’s now-iconic line from the first movie—“You can have any beer you like, as long as it’s a Corona”—is a distillation of just that (and some useful product placement, sure). These are movies untroubled by their choice of cheap beer; they like it, and it’s what they’re used to, and it’s pretty easy to find, so what else matters?

This sounds a little bit like stubborn conservatism, and it’s true that the “Fast And Furious” franchise has some of that. (It’s worth pointing out that for a series that is inclusive with nearly every identity category, it’s steadfastly steered clear of any queer characters. The “Fast And Furious” franchise is too hetero, too obsessed with masculinity, too global, to wander into that territory.) But most of the time, it translates to making the characters feel truly down-to-earth—dedicated to the simple pleasures of life, whether that’s family, fast cars, or a Corona, and typically only wandering into the fray of international crime when someone or other interferes with that. It’s a classic story—don’t disturb the peace, lest the peace disturbs you.

But above all, my feelings for the franchise may boil down to just one thing: There is no story that is more diametrically opposed to detached, blasé hipster irony than the “Fast And Furious” franchise. I’ve plenty of the irony in my life; sometimes, I need to be reminded of the thrill of connection, the thrill of over-investment. The thrill of not being so smart about everything all the time.

There’s an aspect to the “Fast And Furious” franchise that reads like a fairy tale. The first installment of the film (my particular favorite) operated on a fairly small scale, but the emotional heft of the story was entirely epic. Brian O’Conner was from a different life; he came to Dom’s remote corner of the world as an undercover enemy, and gradually, for lack of a better word, fell in love: Not just with Mia, Dom’s beautiful younger sister, but with the whole family, the whole life. A stranger comes to town and is transformed; it has the skeleton of a fable.

Then in later years, the story changed from complex re-definitions of “good guy” and “bad guy” to an ensemble drama that resembled nothing more than Robin Hood and his Merrie Men. The first film centered Brian, more or less, as the film’s cathartic protagonist; by installment number four, that duty went to Diesel’s brooding Dom, a more confident actor with a lot more inner turmoil to angst over. It became a series less about belonging, which is what white-bread Brian so desperately craved (where did Brian come from? Did he ever have his own family?), and more about protecting the family that Dom so passionately defended at all costs (even, creepily, when they didn’t really want him to anymore). The message evoked myths and fairy tales and even comic book superheroes because it’s fundamentally very tribal—Brian wasn’t “one of us” until he was; and “us,” whatever that is, is what Dom is fighting to protect.

The most important thing, though, is that in word and deed, the “Fast And Furious” franchise doesn’t just create a tribe out of its characters; it extends that inclusiveness to the audience, too. The rules of the world are explained simply, right up front: Be loyal, drive fast. Don’t know about cars? We’ll teach you. Don’t have a family? Have ours. It makes it easy to become a part of the Toretto clan, especially since over the last 14 years we’ve lived and died with Jesse, Vince, Leon, Han, Gisele, and now Brian.

There’s also the mechanics of inclusiveness. Dom and Hobbes—the government agent played by Dwayne “The Rock” Johnson, introduced in “Fast Five”—have an extraordinary number of lines said to “themselves,” i.e., to the audience. And the outsize special effects, the at-times lavish set pieces—they’re not establishing coolness so much as inviting you in to stay. That’s where the down-to-earthness of the cast comes in: They’re play-acting in this world. They drink Coronas, remember? They’re just here to talk the talk, walk the walk, do the job, and get paid.

From a critical standpoint, what’s extraordinary about these films is how incredibly popular they’ve become after a decidedly undistinguished start: A great deal of that comes from overseas viewers, which have an appetite for car sequels greater than domestic audiences—an appetite the franchise has leaned into, with international locales, Asian directors, and an increasingly multicultural cast. But a great deal of that, too, comes from “Fast And Furious”’ ability to be a postmodern fairy tale, an action-romance flick, and a buddy-comedy with aging bald guys—in short, to make the mundane into the epic, and then to make the epic into the intensely personal, all while portraying a segment of the planet that too rarely makes it to the silver screen. Without the help of a major comic-book franchise or a tie-in young-adult book series, these films have become mythos in their own right, based purely on the faith that, well, everyone loves cars, right? (I noted with joy that “Furious 7” has a “green-friendly” certification in the credits, stating that the producers made efforts to cut down carbon emissions. Even environmentalists are invited to get in on this action.)

“Furious 7” is a watershed moment for the series. Without giving anything away, I can report that the film handles what it needs to with aplomb. It’s big, it’s loud, it’s a soap opera with a V-8 engine; it introduces new characters and sets past ones to rest. The film returns our cast to Los Angeles for a spell of soul-searching, and it’s oddly fitting that the film would have made it all the way back home to say goodbye to Paul Walker. It will, also, do very well at the box office.

Above all what these films remind me of is that everyone sees their own life as being part of an epic. We all hear the myths, we all know the legends. We all grapple with goodness and badness; we all have family, either the ones we’ve made or the ones we came in with. We all have had reason to fight for the things we’ve loved. Feeling the whole spectrum of human emotions isn’t a privilege for heroes and gods, it’s for all of us. And we can, in the privacy of our own American or imported cars, be the stars of our own grand epics.