The right's Indiana debacle: How their ignorance about discrimination backfired

In his new defense of the state's new "religious liberty" law, Gov. Pence quietly made a big concession. Here's how 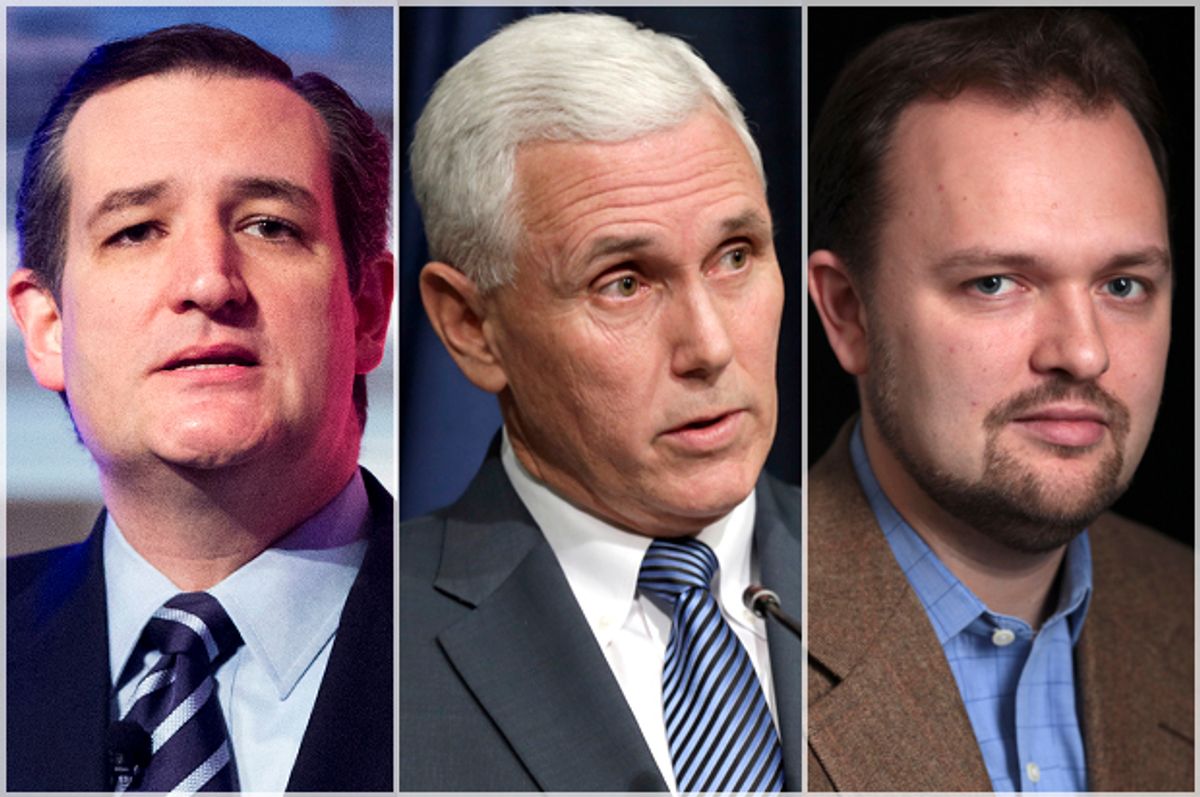 During the early hours of Tuesday afternoon, Mike Pence, the Republican governor of Indiana, held a press conference about the state’s new anti-gay (or pro-religious liberty) law, which has inspired a massive wave of public condemnation and outrage. Even more than the law proposed in Arizona last year — which also ignited a national controversy and was ultimately vetoed by the state’s Republican governor — Indiana’s “Religious Freedom Restoration Act” would allow business owners to refuse service to customers if they believe doing otherwise would be a violation of their faith. The go-to example is a small-time baker who doesn’t want to cater a same-sex wedding.

Pence claimed the goal of the press conference was to “clarify” the meaning and purpose of the law — or, as the Onion usefully put it, to explain why it has nothing to do with what it explicitly intends to do. But like all of his other attempts to contain the blowback, the governor’s press conference did not work. He claimed he wanted to see language on his desk from the state’s legislature affirming the law would not allow a denial of service.  He likely hopes this will be enough to get the Tim Cooks, Charles Barkleys and Jeff Tweedys of the world off his back. We’ll see.

People are right to be skeptical of Pence’s sincerity on this one, of course. He has a long history of representing some of the more virulently homophobic actors in American politics; and the photo op that accompanied his signing of the bill featured many of Indiana’s leading opponents of LGBT rights for a reason. But regardless of whether or not he genuinely “abhors” discrimination, as he claims, I think my colleague Luke Brinker is right in seeing the press conference as a clear victory. At the very least, Pence has implicitly acknowledged that if the bill did what it was obviously intended to do, that would not be okay.

Granted, this is small consolation if you’re a gay teenager in rural Indiana. But it’s a significant concession when placed in the context of the larger debate. Because while the law’s defenders in the 2016 presidential field and the right-wing media have generally preferred to quarrel over whether it’s designed to protect bigots like this guy, a few have also argued — explicitly and implicitly — that even if the law let the local baker refuse to serve LGBT people, that’s not such a big deal. As Hans Fiene wrote in The Federalist, a conservative website whose editors have vociferously defended the Indiana bill, such a refusal would be lead to little more than “hurt … feelings.” So, really, what’s the big deal?

That sounds callous, I know. But I don’t think I’m reading between the lines so much as seeing what’s in front of my face. Patrick Brennan of the National Review, for example, recently harrumphed that the Indiana law would not lead to a “noticeable level of discrimination against homosexuals” (my emphasis). And although The Week’s Michael Brendan Dougherty’s argument that a hypothetical feminist printer should be able to refuse service too is admirable for its intellectual consistency, he’s also imagining a world where LGBT people are told to get over it. He just thinks plenty of others should have to get over it as well.

Dougherty’s colleague Jeff Spross has referred to such a world as one characterized by “balkanization,” which I think is correct. But placing aside the fact that I wouldn’t want to live in such a country for aesthetic reasons, I’d still argue that the burdens of this free-for-all of political ostracizing would inevitably weigh heavier on the shoulders of the disadvantaged than on the rest. Our political culture has a weakness for drawing false equivalencies, and while we usually see this during arguments over race (why are black people allowed to use the n-word?) it’s present here, too. The pain of being excluded because of your politics and the pain of being excluded because of your sexuality are simply not the same.

For an increasing number of Americans, that seems self-evident. But the thing about the rapid shift in the culture over gay rights is that for many people, it isn’t. And until quite recently, these people saw themselves, correctly, as within the mainstream. So when National Review’s Quin Hillyer rails against Pence for “caving,” it’s not sloppiness that causes him to argue that only discrimination over “immutable characteristics” should be banned. The reason he seems to be arguing that homosexuality is a choice is rather simple — it’s what he still believes! The Indiana law is an attempt to grant that belief the status of religious conviction. With Tuesday’s “clarification,” Pence has made that already-doomed effort even less likely to succeed.