Helen Mirren says what many women and men know: Sex after 60 is hotter than ever

The actress says sex was "empty" in her youth, but at 69, it's sizzling -- and experts say she isn’t alone 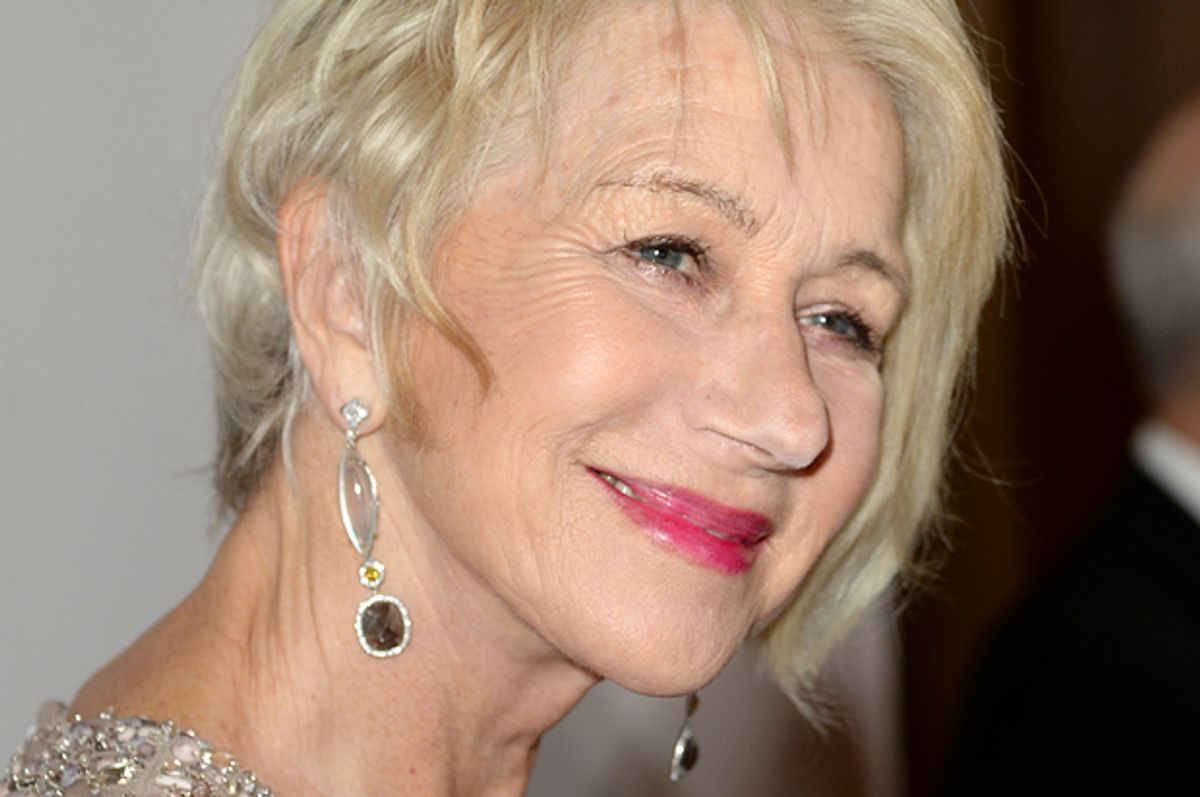 In a recent interview, Helen Mirren announced that sex in her youth was "paranoid and empty." Now, at the age of 69, the Oscar winner said sex is "great, just wonderful." Already, headlines are trumpeting, "Helen Mirren says her sex life is better than ever" and "The Dame Says She's Currently Having the Best Sex of Her Life!" It's not so clear if that's what she was actually saying, but it's clearly a compelling idea: that despite every message to the contrary in our youth-obsessed culture, sex might actually get better and hotter with age.

It isn’t the first time I’ve encountered the idea. My grandma Esther once casually told me, “Sex only gets better into your 80s.” After the death of my grandpa Chester -- yes, they had rhyming names -- she once remarked tearfully, “He was the most amazing lover.” It was nothing short of mind-blowing: People still have sex at that age? By now, I’ve fully accepted that -- I look forward to it, in fact. But does it really get better? One study has suggested it's true, at least for women: Researchers surveyed more than 1,000 older ladies and found  that "sexual satisfaction increased with age." Other research has found that many seniors still enjoy sex and have regular orgasms.

"It goes two ways: Sex can be the best ever or it can be really challenging,” says Joan Price, author of three books on the topic of senior sex, including most recently, "The Ultimate Guide to Sex After Fifty: How to Maintain – or Regain – a Spicy, Satisfying Sex Life." What determines the outcome are people’s attitudes and their ability to look at sex in a new way, she says. “If we realize that sex changes as we age, it gets better and better emotionally and relationship-wise, because we know what we want now, we know how to communicate. We've hit our groove, sexually,” says Price. “On the other hand, if we're looking for instant arousal and fast orgasms and rock-hard erections, well, we're just looking at it wrong. We're stuck in what young sex was.”

Part of thinking about it right is redefining sex as not just about penetration -- because, yes, there can be erectile difficulties. “The whole journey is the main event,” she says. “It’s just a step-by-step, slow, wonderful, languid, sexy, sometimes funny, sex act that may last an hour. I don’t mean that we’re having intercourse for an hour, no, but from start to finish -- with the cuddling and the kidding and the touching, or maybe even before that with the dancing in the living room or taking a shower together.”

Walker Thorton, a single 60-year-old woman who blogs about middle-age sex, recently had a partner with erectile issues, but, she says, “We worked around it, expanded our definition of ‘sex.’” She added, “Which we all should do.” It isn’t all hurdles to jump over, though. Thorton says things started to get better for her sexually a few years ago. Part of that was just the confidence that comes with age. “I feel a higher level of desire and the ability to ask for what I want,” she says. “I have fewer issues achieving orgasm now because I feel more confident and I've tapped into my desire.” She also communicates more with her partners about “what I want, what works and what doesn't.”

According to Melanie Davis, co-president of the Sexuality and Aging Consortium at Widener University, Thorton’s experience isn’t at all unusual. “With age comes an acceptance of our bodies and other people’s bodies,” she says. “We can be freer to focus on sensuality than speed -- more on eroticism than athleticism. We know what we like, and we may be more comfortable communicating that than we were in earlier years.”

It's possible to look at the physical challenges that come with age from a glass-half-full point of view. “For heterosexual couples, we find for the first time in our lives, I think, that men and women have the same pace, suddenly. Instead of young men feeling that ‘oh, gotta slow down, gotta wait for her, I just wish I could get to where I want to go,’ the older man is saying, ‘I need a lot more kissing and touching too.’” And the woman, says Price, is saying, “Oh my gosh, finally!”

In an email, “Eric,” 60, told me, “I must say sex is not what it was when I was 20,” he wrote. “The mystery is not what it once was before making love thousands of times. My penis is not as sensitive as it once was. I can only come once in an evening now, where it was once possible to come four times in a night. Orgasms are not nearly as strong as they once were.”

Again, though, many of those things are also good things: Some mystery may be lost, but sex with a new woman isn’t as intimidating as it once was. For him, a less sensitive penis means he can last longer. Orgasms, now muted, feel less important, but he says there’s a benefit to that: “I can be relatively happy lazily engaged in vaginal sex for an hour.” Also, friendships with women are easier, he says, “because I am not focused on getting into a woman's pants” and women are “not wary of me as I am now longer a sexual threat in their eyes.”

Indeed, I heard from a couple of men who lamented the way sex changes as you age. A 60-something-year-old wrote to me on Facebook, “No, it doesn't get better. Neither does eyesight, hearing or field goal percentage.”

A 68-year-old man emailed me to say, “If the urologist does not interfere too much, it can remain awfully good.” I asked him if he was referring to trouble getting it up. “Not erectile problems at all, but prostate,” he said. “At least one prostate med put a damper on things.” Unhappy with the drug’s side-effects -- which included “growing one breast,” he said -- he quit that drug. “After that drug wore off, a 15-year-old would have been proud of the restored function,” he wrote.

Then his email turned to a topic that is just about the exact opposite of sex, that subject you just can’t ignore as you get older: mortality. “Many men will have prostate problems, many will die of it, many will die with it,” he said. “I'm waiting for the cancer with a family history and Agent Orange exposure in Vietnam. In the meantime ... while we wait ...” That’s how the email ended.

Some people look back to sex in their 20s with nostalgia. Others only find their sexual groove after their 60th birthday. More still find their bodies sometimes failing them, but enjoy the more creative sex that it requires. It makes the question of whether sex gets better with age a difficult one. The only definitive answer is simply, as Price said, "It can."