I called him pathetic, he accused me of ruining his life: What children did to our marriage

We used to be one of those couples, annoying in our insularity. Then I fell into motherhood as if into a well 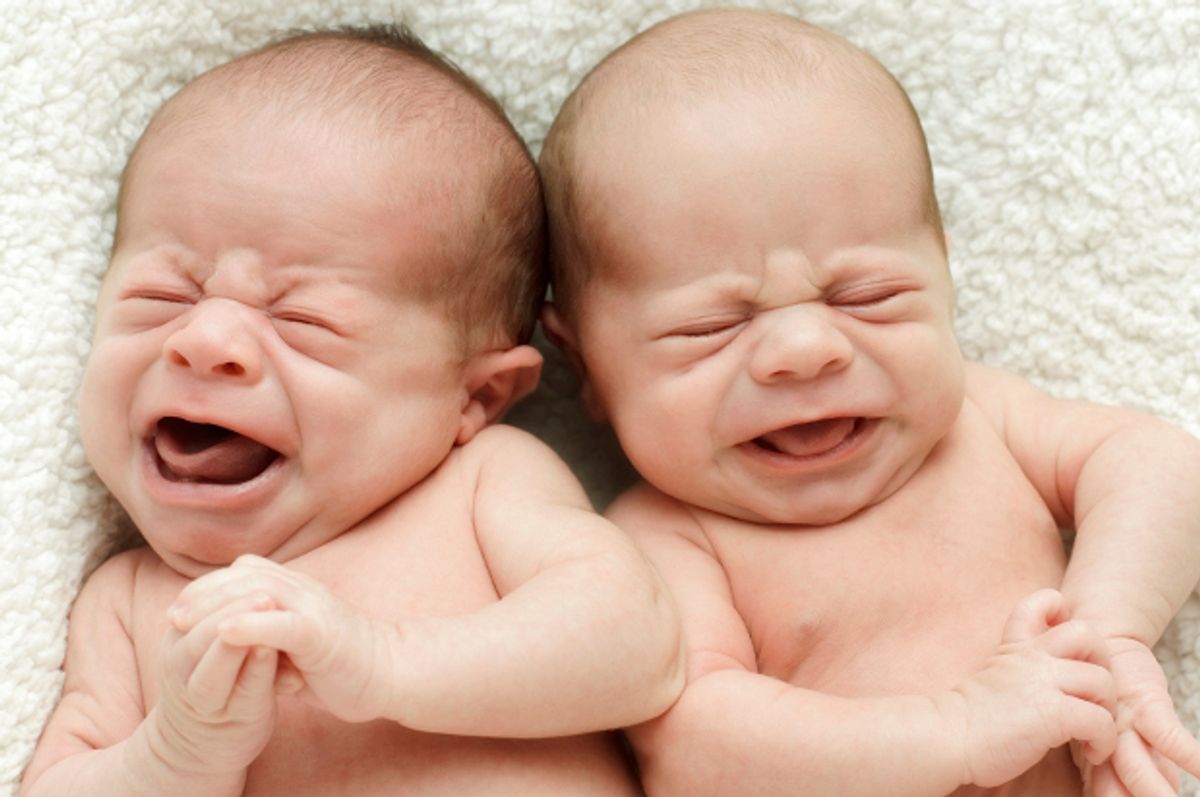 Do you remember the public service campaign from the 1980s? A man walks over to the stove, picks up an egg and holds it between forefinger and thumb. “This is your brain,” he says, before emptying the shell’s contents into a hot pan where it begins to fry. “This is your brain on drugs. Any questions?”

I think of that advertisement often when I try to explain to my childless friends, those on the brink of becoming unchildless, what having young kids does to a marriage. I don’t want to scare them, and I’m aware my experience is hardly universal. But I want to color a realistic picture, so they aren’t blindsided like I was. The same way I tell them about the blood after birth and the cracked nipples and the dark sea of exhaustion.

I’ve played around with different metaphors. Children are untold pressure, I say, lava bubbling beneath the surface of the otherwise unbroken rock of marriage. Children are a crucible, I say, able to withstand dizzyingly high temperatures themselves but drop a marriage in their midst and it will melt. Wherever the poetry takes me on a given occasion, I always come back to the image of the egg. What was once whole and smooth is now cracked and sizzling with resentment. Marriage on children is a process of irreversible change.

My husband and I used have a pristine shell. We were one of those couples, annoying in our insularity, our us-ness. We were both academics. We talked philosophy at the dinner table. We sat in opposite rooms of our flat, typing furiously across the hall from one another, doors ajar. “What’s another word for ‘conjure’?” I would ask, flexing my fingers and leaning back in my chair so I could catch his eye. “Magic!” he would say. And we would smile at each other and return, heads down, to our respective writing.

For most of my 20s I said I didn’t want children. Neither of us did. But my husband is eight years older than I am and as his 30-something friends began to walk the cobblestoned road of reproduction, as 30-somethings tend to do, he decided it was time. I was happy enough to oblige. I had just finished my doctorate and we had moved to a new city for his job, where I had no job of my own. It seemed as good a moment as any to take the plunge.

The first kid didn’t make much of a dent in our relationship. Mainly because he was a dream in every respect, a perfect mingling of our disparate DNA. He slept well and ate well. He hit his milestones on time, if not early. He even looked like a cherub, a heart-shaped face with long-lashed eyes and a dimple placed just so that when he smiled (which he did a lot), he transformed into the Gerber baby.

My husband and I also survived our first child relatively unscathed, I realize now, because he was a novelty. We weren’t immune to the familiar new baby fights—I was controlling about details I should have let go, he could have been more sensitive to my plight as a stay-at-home mom—but there was an overriding sense of camaraderie, of joint purpose, in our parenting. My husband wore the baby strapped to his chest as he vacuumed the floor. He came with me for moral support to doctor’s appointments. He emailed the latest round of pictures, proudly, to his parents. All of this would change over time, as his interest, or his presence, rather, waned with each subsequent child.

But the truth is I was changing, too. I fell into motherhood as if into a well, and there was no foothold on its slick walls with which to hoist myself out. Not for a while, anyhow. I became one of those women who eagerly trades in Plato for “Pat the Bunny,” an evening glass of Pinot Noir for an extra hour of sleep, all the while their partners look on, bemused, a “what’s happened to my wife here?” expression plastered politely across their faces.

The first baby might have been my husband’s idea. But to have a second one so soon afterward was mine. I couldn’t wait. I finally understood the legend of maternal longing women speak of with hushed reverence. That desire for another child, it called to me like a Siren and I was rendered helpless by its song.

Having a newborn and a toddler was when it started to unravel for us. This baby didn’t sleep so well. Our older son was only 2 years old and still needed a lot of attention, which my husband saw to as I endlessly breast-fed. We took turns managing the pre-dawn wakings. We were tired and cranky and suddenly things didn’t seem so “happy families” anymore. Push and pull, push and pull, time took on an ugly, contentious quality. My trip to the gym was his baby-sitting, his drink with friends was me punching in my card overtime.

On top of this, my husband’s work was suffering, or so he felt. “I’m too tired to write, I’m too tired to think!” It was a refrain. We fought more. That summer I dragged the kids to my parents’ house for three weeks by myself, to give him a chance to catch up at the office, to catch up in general—an “emergency” arrangement that would become the norm.

Time ticked on. As the nights resumed their original shape and our tetchy second baby grew into a sunbeam of a toddler, the Sirens sang to me again. One more, I wanted one more. My husband, on the other hand, did not.

We made the decision over a lunch of hamburgers and tears (mine). I don’t know how other couples navigate the rocky terrain of major marital disagreement, but we boiled it down to this: My desire for a third kid was greater than my husband’s desire not to have one. He was OK with the prospect of another child, at least in theory. But he couldn’t go back to diapers the color of mustard, to mewling cries in the dead of night. He made it clear to me that he didn’t have it in him to do that again.

For my part, I latched on to the reality that babies turn into children. A year to muddle through, a year and half tops, and then we could begin moving forward again, with the right number of people in the family photo. I believed, I genuinely believed, that I was strong enough to bear the brunt of the last baby alone and I offered this strength to him as the solution to our problem, wrapped with a red ribbon. And he took it, which was his gift to me.

But where there is conception, there is risk. The discovery of a second heartbeat threw our already fragile plan into disarray. Another yolk spitting in the pan. Eight weeks and five days into the pregnancy, after I saw our grainy future as the parents of twins projected onto an ultrasound screen, we sat at the kitchen table, eerily quiet.

“We can terminate,” I said, and it wasn’t just a throwaway line. At that point, I couldn't see even a flicker of light.

“No. We can’t,” he said firmly, and not because he’s doesn’t believe in abortion. “You’ll never forgive me if we do.”

He was right. We were at a true impasse. I didn’t want twins, per se, but I was sure that I wanted two more babies more than I wanted no more babies and I couldn’t imagine us ever trying to conceive again after this. Whichever way it went, one of us was now staring down the barrel of an existence significantly altered from the one they had envisaged for themselves.

I stuck to my word of self-reliance, as best I could, through the debilitating pregnancy, through the morass of the first 12 months. But life with two babies is materially different from life with one, no matter how strong you think you are. We hired a nanny and my husband steered clear of the wreckage, though to be fair to him not as much as he would have, had there only been a singleton. We fought less, because he was around less. When we did fight, it was ice to the heart. He accused me of ruining his life. I called his refusal to rise to the challenge pathetic.

We pressed on, but separately. By the end of those early days with twins both of us were so spent, so desperate for “me” time, that we would retreat to our own corners, licking wounds, before waking up to the next round.

Fog lifts. The view, when it does, isn’t necessarily the same. The kids are getting older now, and my husband and I have found the space again to grant each other small kindnesses. To meet for lunch in the middle of the week every so often, to laugh at each other’s jokes. But will he ever be able to look at me without seeing the woman who doubled the number of children he is responsible for, not once but twice, the woman who made his life virtually unrecognizable for too many years? And will I ever be able to look at him without seeing the man who made me feel like a single parent for those years, not because he wasn’t there physically, but because he wasn’t there emotionally?

In the mornings, in between bags packed and shoes on, the sheer volume of our children, the cascade of their needs, means it’s nearly impossible for my husband and me to have anything resembling an actual conversation. But sometimes I catch his eye as he guzzles his coffee, if one or other of the kids has said something cute, and I smile like I used to, hoping he sees what I do: this beautifully messy plate of scrambled eggs we've made together.