Stop ruining Twitter for comedians: You don't get smart, edgy jokes without sometimes making a mess

Nobody becomes a Louis C.K. or a Chris Rock overnight. It takes trial and error -- in public -- to develop a voice 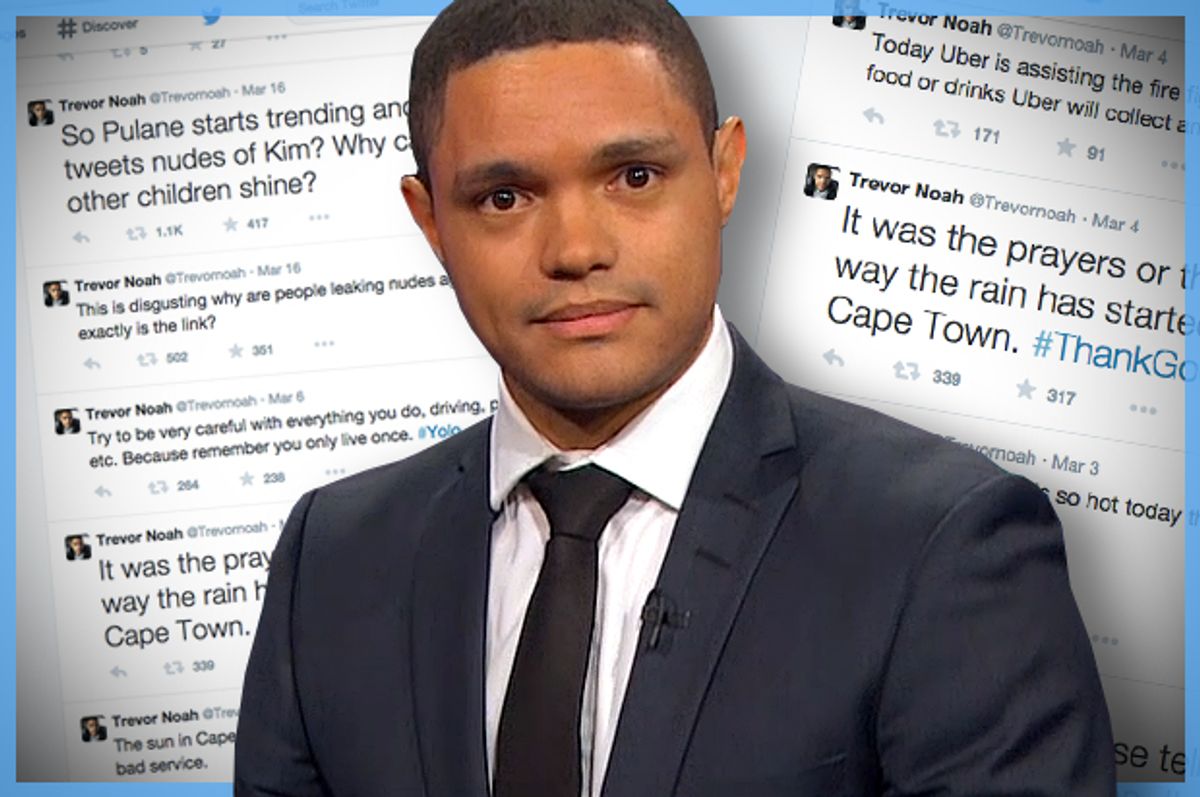 The Internet is abuzz about Trevor Noah, the host-on-deck of "The Daily Show," set to take over for Jon Stewart at an unspecified date. Noah, a South African comedian with a few "Daily Show" spots under his belt, was thrust into the media limelight — initially, with generally positive response to his hiring. And then the next day, after someone spent way too much time scouring through Noah’s old tweets, the inevitable backlash began. Someone (honestly, at this point, I don’t know who) found some old tweets they found offensive, and posted them, with a headline that I can assume was akin to “New Daily Show Host Posted Offensive Jokes.” The media circle of reposting took off. “Is The Daily Show’s New Host Over Before He Began?” or some version of that (Salon's was "Did Trevor Noah's Twitter history just kill 'The Daily Show?'") could be found on every news outlet’s front page.

The specifics of the tweets themselves? You can find them by searching anywhere online with Trevor Noah’s name. Jokes that he wrote years ago were brought to the forefront of discussions about his new job. Issues like this get caught up in the hype train so quickly, with media outlets (including this one) hurrying to post articles from both sides of the story. There is a rush within the media these days to be first, rather than correct or complete — you can lose out on traffic and revenue by waiting to hear an entire story. In the case of Trevor Noah, the scent of a controversy essentially created the controversy.

Comedy is a rare, different art form in many ways. With Noah, we see a case where his "practice" (for lack of a better, equally universal term) has rubbed people the wrong way. People within the comedy community tend to sense this trend of digging back into a celebrity's old timelines, and I don’t think it affects their work — at least, let's hope not. I know I try to not let potential fallout affect how I am creating my art or developing my skills as a comedian — I would rather focus on being funny.

Practicing comedy requires an audience — reactions from real people — to improve. A bit is often far from perfect, or even good, when it is conceived. A small bud of an idea forms in a comedian's head, and almost always must be verbally dissected, repeated, tweaked, contorted and reworked before it reaches its final destination. Comedians cannot shoot hoops in their backyard to get better. They can’t even play one-on-one with another comedian. It takes repetition in front of different audiences to improve. Audiences are (more often than not) witnessing a work in progress. Most art forms, or attractions that are eventually public, allow you to "miss" quietly, alone — not ours.

Everyone wants "edgy" and "real" comedians, but the process of developing into that is messy. No one wakes up Louis C.K., or Bill Burr. It takes an incomprehensible amount of time and failures to develop a voice. And with that, comes the need for practice in a venue that feels safe to say anything you feel you need to say.

In an interview with Vulture, Chris Rock explains it better than I ever could:

“It is scary, because the thing about comedians is that you’re the only ones who practice in front of a crowd. Prince doesn’t run a demo on the radio. But in stand-up, the demo gets out. There are a few guys good enough to write a perfect act and get onstage, but everybody else workshops it and workshops it, and it can get real messy. It can get downright offensive. Before everyone had a recording device and was wired like fucking Sammy the Bull, you’d say something that went too far, and you’d go, “Oh, I went too far,” and you would just brush it off. But if you think you don’t have room to make mistakes, it’s going to lead to safer, gooier stand-up. You can’t think the thoughts you want to think if you think you’re being watched.”

Rock is on a level of comedy that everyone in the industry can only dream of achieving. Nothing I say at a show is going to warrant a news story, regardless of how iffy it is. But Rock, and the rest of the world’s top working comedians, have legitimate concerns to deal with when working on new material. Jokes in progress can offend someone and leak out, affecting their image and potentially their careers.

The creation of a polished joke is often messy, even downright unfunny. “That one will get there,” or, “Well, that’s new, needs some work,” can often be heard by comedians when a newer joke falls flat at a show.

The advent of social media has created a new venue, open 24 hours a day, seven days a week, where comedians can toss out, hone and play with new material. Twitter especially has allowed comedians to amass followings and essentially always have a "room" to try out new jokes. They have their crowd (followers) who give them feedback in the form of favorites, likes, @-replies. What is seen on Twitter is often the very early thread of a future idea, or a stream of consciousness thought-spew to see what sticks. This is a beautiful thing for comedians. I have used ideas from tweets to create full-fledged jokes for my act.

In the case of Trevor Noah, the jokes in question were four or five ideas, plucked from hundreds — written years ago. He surely has grown as a comedian, writer and performer since then. Specifically in Noah’s case, the scouring years back through tweets seemed to be driven from no purpose other than to find something to write about — searching for dirt on a hot name in the news. There’s no other reason to sift back years. It seems like the sort of thing someone would do to an opposing politician. Get a fucking life.

I’m not defending the jokes Noah wrote. He doesn’t need me or anyone to defend him. He’s going to be just fine. I was not offended by the jokes. As a comedian, I suppose my only thought on those jokes is: they’re not that funny. And I’ve had more than my own share of not funny jokes. (Some people would say most everything I do isn’t funny, but that’s just my parents.)

I’m not saying that people should not get offended. Generally, I think everyone is offended too easily, and everyone just needs to fucking relax, but that's just me. (It has become a constant at comedy shows, comedians will make a joke that could be construed as offensive, and the crowd will “ahhhh.” The comedian will reply, “Oh, go fucking blog about it.”) But people are allowed to be offended by what offends them. And the tension of potentially offending people is a necessary thing for comedy — that release of tension is often what garners the largest laughs. The line is very thin, and toeing it is what can create beautiful comedy. People can get offended, and hopefully comedians continue to work along with, and in spite of, just that.

If I am condemning anyone, it’s the media and their role in all of this. When it comes down to it, I don’t think anyone in comedy was really offended by Trevor Noah’s tweets. I think someone posted them, and the media firestorm blew itself up. Websites and news outlets drool at the idea of the headline “New Daily Show Host Makes Inappropriate Fat People Jokes.” The idea of tearing someone down is very hip, and generates plenty of traffic. And there seems to be no safer way to get all of the views possible than jumping aboard a fabricated non-story, post all sides to the story, and allow everyone to share the article they agree or disagree with. But among comedians, Noah’s tweets are just another non-story that creates more resentment toward Internet outlets — backlash to backlash to backlash to fake backlash.

Comedians must work out their art in front of audiences, which will inevitably offend people. Hopefully comedians, at least, continue to not be offended. The media loves stories that will create uproar, no matter how fabricated the uproar is. Let’s all just laugh?

Kyle Ayers is a comedian living in New York City. He performs all over the country, and runs the very bizarre comedy show First Comes Love. He’s originally from Missouri, and has no idea what he’s doing most of the time.