Sutton Foster's Gen-X panic sitcom "Younger": How "divorced and 40" became the new "kept in a bunker for 15 years" 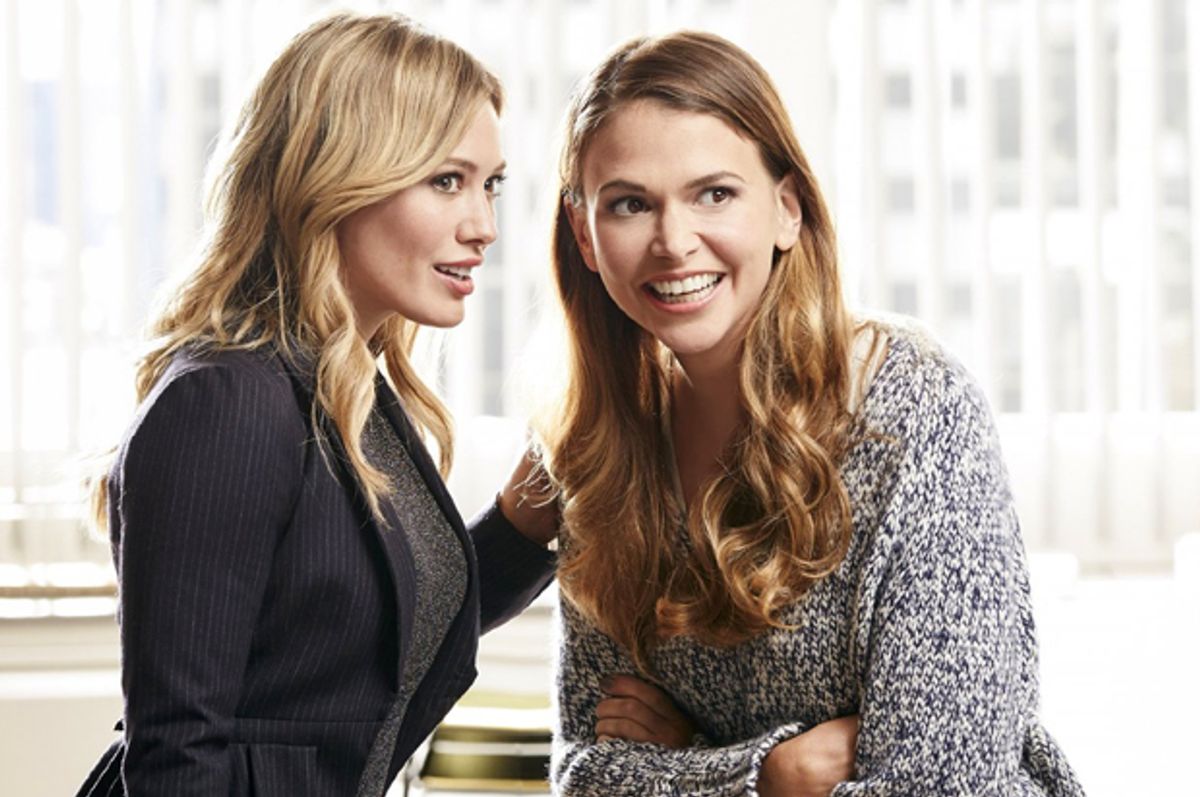 There's an alarming condition that's afflicting an increasing number of women on television. Though the exact causes are unknown, it appears to be brought on be touching magical stones in Scotland, being kidnapped and trapped in a bunker for fifteen years, or living in New Jersey. It is called Lady Out of Time Syndrome, and 40-year-old suburban mom Liza Miller is its latest victim/beneficiary.

On TV Land's promising new original sitcom "Younger," the lovely, flawlessly cast Sutton Foster plays a mother of a teenage daughter who's thrust back into the workforce by a sudden and ugly divorce. Armed with a gap-riddled dusty resume and a CPAC-ready conservative quasi Chanel suit, Liza bombs out in the job search when she's stuck interviewing with 25 year–olds who digress into a conversations about their boob shot experiences on Tinder and cautiously declare her to "way too o… orange." But when, soon after, a handsome stranger at a bar assumes she's his twentysomething peer, Liza thrusts herself into the Gen-X protection program and emerges as a short skirt-wearing semi-recent college grad who's spent the past few years vaguely working on her novel and volunteering in India. And in the blink of an eye, she's landed a promising low-level job working for the fearsome Diana Trout – a brittle, bitter divorced woman over 40.

Created by "Sex and the City's" Darren Star and based on the novel by Pamela Redmond Satran, "Younger" shares "SATC's" slick capacity for pretty scenes of New York City and what sometimes comes close to social commentary. In the first two episodes, there are moments of wry generational humor -- Liza's quest to pass as 26 involves ditching her AOL address and a backstory involving losing her virginity during a viewing of "The Notebook," while her friend Maggie wearily sums up Brooklyn as "bearded cheese mongers and chicks that look like Macaulay Culkin." But while the bubbly, smart Foster is entirely believable as both a 40 year-old mother and a breezy 26 year-old assistant, what's less convincing is that any self-respecting 26 year-old would declare her heroes to be Katniss Everdeen and One Direction. And at times it appears her life in the Garden State must have been deeper underground than Kimmy Schmidt's bunker – Liza makes the horrifying faux pas of undressing at the gym while still having pubic hair, and she replies to a suitor's boast of having tattooed the inside of Lena Dunham's ass cheeks with the punchline, "Who's Lena Dunham?" Yo, we all got the memo about pubes. It was on "Sex and the City" fifteen years ago. And we read about "Girls" in "The New Yorker." Liza has a teenaged daughter. How does she not know, albeit secondhand, more about the modern world? I am in my forties and have an older child is in high school, and she keeps me apprised of important information like who Fifth Harmony is and what that button on my phone does. That's what having kids is for.

"Younger" – like "Unbreakable Kimmy Schmidt" and VH1's "Hindsight" – explores the apparently suddenly pressing question of the what ifs of women's lives. Would you, if you had the chance to, do it all differently? When Liza's self-appointed work mentor Kelsey (Hilary Duff) observes that you're only in your twenties once, Liza knowingly snorts her qualified assent. But what "Younger" has so far only briefly touched on – and I hope it delves into more deeply – is that Liza's second chance has come about not just because of her bad divorce and youthful skin tone. It's a product of her monumental privilege. She's a woman who went to Dartmouth, was a young achiever in the book publishing world, and then, like Kimmy Schmidt, basically disappeared off the planet for a decade and a half. Liza mommy tracked herself right off the grid, becoming in the process a cautionary tale for the notorious "opt-out" generation. Instead of an underground crank and a beaten up "Baby-Sitters Club" mystery, Liza got a fireplace and a flat-screen television. But like Kimmy, she is also now navigating a strange new world, one in which the dick pic is a modern mating ritual. And while Liza's survival response is a sitcom level extreme one – she's a one-woman "Bosom Buddies" – "Younger" does show glimmers that it might yet offer more than "clueless old person discovers Internet" jokes. Liza is an approaching middle-aged woman who's never really asked herself what she wants to do with her life. And while her ambitious boss – the always fabulous Miriam Shor – seems on the surface a growling riff on Miranda Priestly – Kelsey's tart observation that "She's hit her head on the glass ceiling so many times she has dementia" is brutal and revealing.

A few weeks ago, I ran into a friend whose spouse, a lawyer, had recently left the profession to be a social worker. She said that one of the reasons was age. He wanted to work in a profession in which being over 25 was viewed as an asset, in which experience was a mark of achievement. The core joke of "Younger" is how impossibly rare that idea is, especially for a woman. The question that remains is whether the show thinks that joke is on Liza -- or the world she inhabits. Or maybe it's both. In the premiere episode's most insightful, telling moment, Liza lands her new job not by having the face of a girl but the hard won experience of a woman. "I'm a grown-up," she says, with no trace of youthful hubris. "I don't think I'm special."