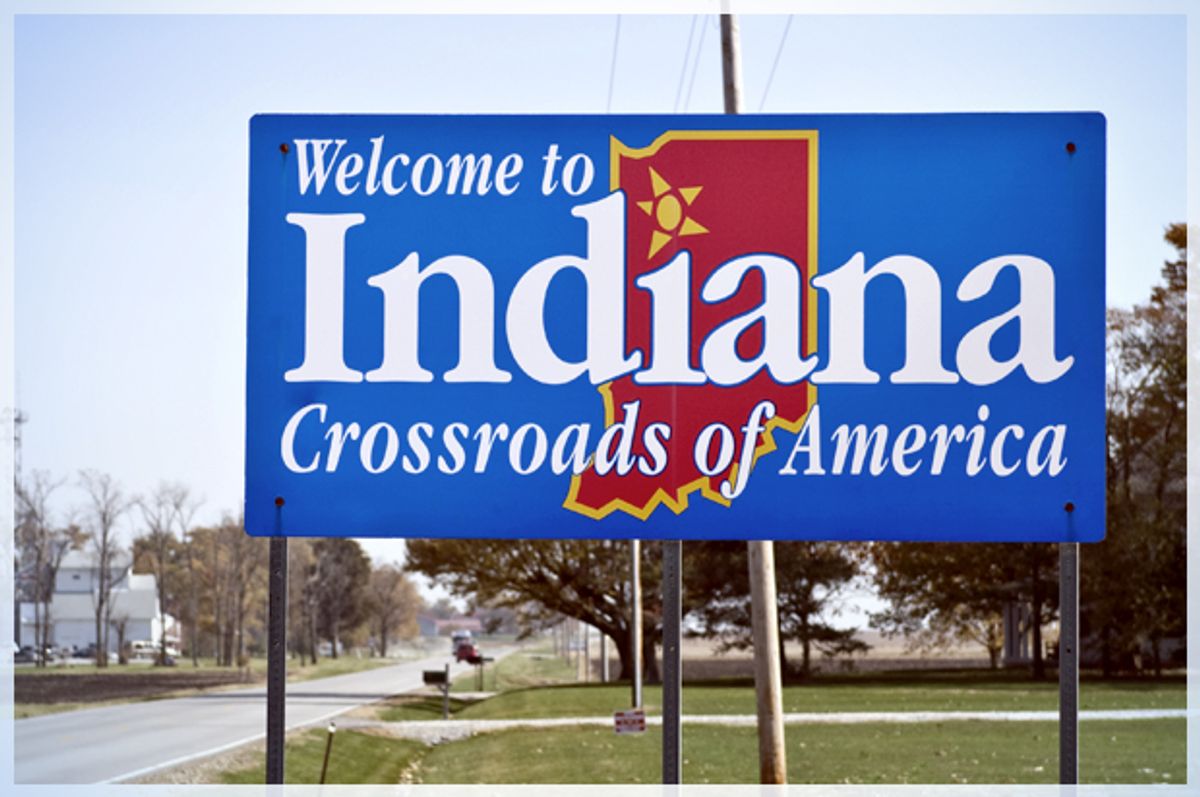 The Indiana Toll Road begins at the Illinois border, just west of Hammond, and runs past a series of cities which have been hard-hit by the collapse of American manufacturing. They include Gary, where most of the factories have long since closed (its most famous export nowadays is the Jackson family); South Bend, which has lost one-fourth of its population since the Studebaker plant and others shut down; and Elkhart, known for manufacturing band instruments and recreational vehicles.

The Toll Road was privatized in 2006 to great fanfare, but the new owner has since gone bankrupt – the victim of bad judgement, a bad swaps deal, and a struggling economy. The winning bid in 2006 was $3.8 billion, $1 billion higher than the next highest offer. The new offer is $5.72 billion. Has this property, located in an economically challenged state, really appreciated by more than 50 percent? Or is something else going on?

The Indiana Toll Road is more than a highway. It is an infinite loop through the neoliberal world order, the mirror of a recursive economy in which every step toward corporatization creates more hardship – and every increase in hardship calls for more corporatization. Indiana is winning headlines today for enshrining bigotry into law in the name of religious freedom. But its toll road fiasco deserves a headline of its own.

Speaking of headlines: “The $3.8 billion was a real headline-grabber at the time,” transportation policy expert Jonathon Gifford told Bond Buyer, “but the $5.72 billion is a really surprising number." But when considering the financial interests behind these deals, they're not as surprising as they ight seem.

The Indiana Toll Road was first privatized in 2006 when Cintra-Macquarie, a Spanish and Australian consortium, purchased a 75-year lease on the 157-mile-long highway for $3.8 billion. It won the right to collect and keep all tolls on the road in return for agreeing to certain performance standards and accepting some limits on its ability to raise rates.

The $3.8 billion was used to shore up the state budget, which has been struggling with falling income tax and sales tax revenues. But why were they falling? Indiana's industrial base had been decimated by corporation-friendly free trade agreements, and by policies which promote wealth inequality and therefore reduced the market for consumer goods. Its unemployment had been exacerbated by cuts in government jobs, which were needed to accommodate tax cuts for corporations and the wealthy. The latest round of those tax cuts took place under President George W. Bush in 2001 and 2003, under the supervision of White House budget director Mitch Daniels.

Daniels had been Ronald Reagan's political director before joining the far-right Hudson Institute. After a stint at drug manufacturer Eli Lilly, where he earned $27 million in 2001 alone, he ran the Office of Management and the Budget in the Bush Administration, presiding over budget and tax cuts which further harmed Indiana's wounded economy.

When Daniels ran for governor of Indiana in 2004, the Washington Post began its profile of him  by noting that “President Bush admiringly called him 'the Blade,' for the gleam in his budget-cutting eye.” He won that year, as did his former boss.

Needless to say, Mitch Daniels was not a Keynesian. Nor was he interested in slowing the race to the bottom on wages and working conditions that “free trade” had created for global workers. Daniels did not, upon assuming office, ask himself what sorts of state and national policies might put the jobless people of Gary or South Bend back to work.  It did not occur to him to promote national policies that might provide jobs for the residents of my hometown of Utica, New York, so that their schools could once again purchase Elkhart-made brass instruments like the trombone I once played in the marching band.

Instead Mitch Daniels did what comes naturally for politicians like him: He privatized. Then the financial crisis of 2008 struck. That crisis was a direct result of deregulation – another key element of the corporatization agenda. Hoosiers started driving less, according to some analyses, which was bad news for the purchasing consortium, as toll revenues turned out to be 17 percent less than projected (although the projections themselves may have been initially overstated by consultants with conflicts of interest).

Then the Macquarie-Cintra venture was hit hard by an interest-rate swaps deal gone bad, and by some unusually­ high interest charges on its debt.  That left it unable to meet the reserving requirements of its lease agreement. Soon it was struggling to serve the toll road's users. A report earlier this month in the Indianapolis Star told of a state senator who said he'd fielded complaints about “long waits at toll plazas, bridges that haven’t been repaired in more than a year and rest stops that reek of urine.”

Australia-based IFM Investors has been announced as the winning bidder to assume the remainder of Cintra-Macquarie's lease. But how has the economy of Indiana, and the broader national economy, fared in this deal? Angie Smith and Payton Chung examined the deal closely and found “an opaque agreement based on proprietary information the public cannot access; a profit-making strategy … divorced from the actual infrastructure product or service; and faulty assumptions … which can incur huge public expense down the line.”

In other words, privatization deals often limit the ability of people to govern themselves.

San Diego's bus privatization has not performed as promised. Most of the savings came from crude cuts in service, not from privatization or the much-vaunted “efficiency of the private sector.” The city's privatized South Bay Expressway, another toll road managed by Indiana co-owner Macquarie, went bankrupt in 2010. (Do we sense a pattern here?) In other California privatization failures, costs for San Francisco's Presidio Parkway more than doubled, while Orange County's Highway 91 went bankrupt and required a $207 million public bailout.

There are other problems with privatization. Private companies also charge far more for water and sewer services than governments do. (Food and Water Watch found that their rates were 33 percent higher.)  Private prisons appear to cost more, as the New York Times reported, while the ACLU found that higher incarceration rates lead to windfall profits under privatized prison systems.

Nor is the inefficiency and greed limited to civilian life. The privatization of military housing has proven costly, according to the Government Accounting Office, and an Air Force major who studied the privatization of Newark Air Force Base stated (in a rather folksy way) that “the Air Force seems to be just flat out paying more for the same service it received under the old depot system.”

Privatization is often a bad deal for investors, too, as the Congressional Budget Office noted in 2012. The CBO studied eight highway projects and found that, with one exception, “private equity investors' expectations of profitability for the projects have been unfulfilled.”

Under privatization, the goal is no longer to provide publicly funded services effectively and efficiently. Nor is the goal to make a profit for investors. The deal itself is the goal, because that's where intermediaries make their profits.

The Indiana Toll Road is a case in point. As David Rutter of the Chicago Tribune notes, Macquarie is “essentially a bank that lures investors.” It gambles with other people's money. If the deal subsequently goes wrong, others – and the economy as a whole – pay the price.

Analyst Jim Chanos, one of Enron's earliest critics, described Macquarie's model as “quite possibly the most efficient method of legally relieving investors of their money ever conceived." Because it invests other people's money, said Chanos, the firm has"a perverse incentive to serially overpay for assets."

The SEC recently fined Macquarie $15 million for falsely marketing a coal mining investment in China. Australian regulators have also ordered Macquarie to offer compensation to 160,000 investors for offering poor advice and ethical lapses in the handling of their accounts. As the Australian Broadcasting Company reported, “the allegations against Macquarie follow(ed) complaints from clients who discovered their money had been placed into high-risk investments without their consent resulting in losses of, in some cases, millions of dollars.”

None of it seems to have slowed Macquarie down. Its corporate website indicates that its infrastructure funds have raised $11 billion in the last two years. It reports that one subsidiary fund “has been investing in North American infrastructure since 2001 and has committed more than $17.3 billion of equity in over 57 infrastructure assets in the region.”

IFM Investors, which is purchasing the Indiana Toll Road, advertises itself to pension funds.  It is owned by 30 Australian funds, and an IFM executive says that “Most of our investors (in the Toll Road) ... are large U.S. pension funds.” If true, the retirement security of millions of middle-class Americans is at risk.

This will not make those middle-class Americans feel any safer:  Brett Himbury, the banker who runs IFM Investors, is currently embroiled in a corporate "governance scandal,” according to the Australian Financial Review.  And the rebidding process for the Indiana Toll Road company was led by UBS,a bank that was fined $1.5 billion in the LIBOR scandal, nearly $50 million for CDO fraud, and $780 million in a tax-evasion case – and which is now being investigated once again for both tax evasion and currency manipulation.

It's the “circle of life,” neoliberal style: Enter into “free trade” deals which benefit global investors, then watch as wages stagnate and jobs disappear. Cut taxes for the wealthy and corporations, depriving the nation of funds for infrastructure. Make under- and unemployed residents of cities like Gary, Indiana, pay tolls to make up the shortfall, and jeopardize the retirement security of middle-class Americans in sketchy privatization deals to replace lost infrastructure funding.

Then let bankers overcharge privatization investors, and sell them some high-risk swaps too. On a national scale, turn the economy over to banks that will defraud and gamble us into a recession – and if that recession leads to lower than expected toll revenue, shrug and walk away.  Watch the deal come apart in the face of these centrifugal economic forces, let others pick up the pieces, then hire a bank like UBS and begin the whole process again.

Meanwhile, according to some reports, there's a problem with urine smells on the highway.