Robbed of its anarchic spirit, “Furious 7” shifts gears into an ass-kicking, hyper-sentimental meditation on death 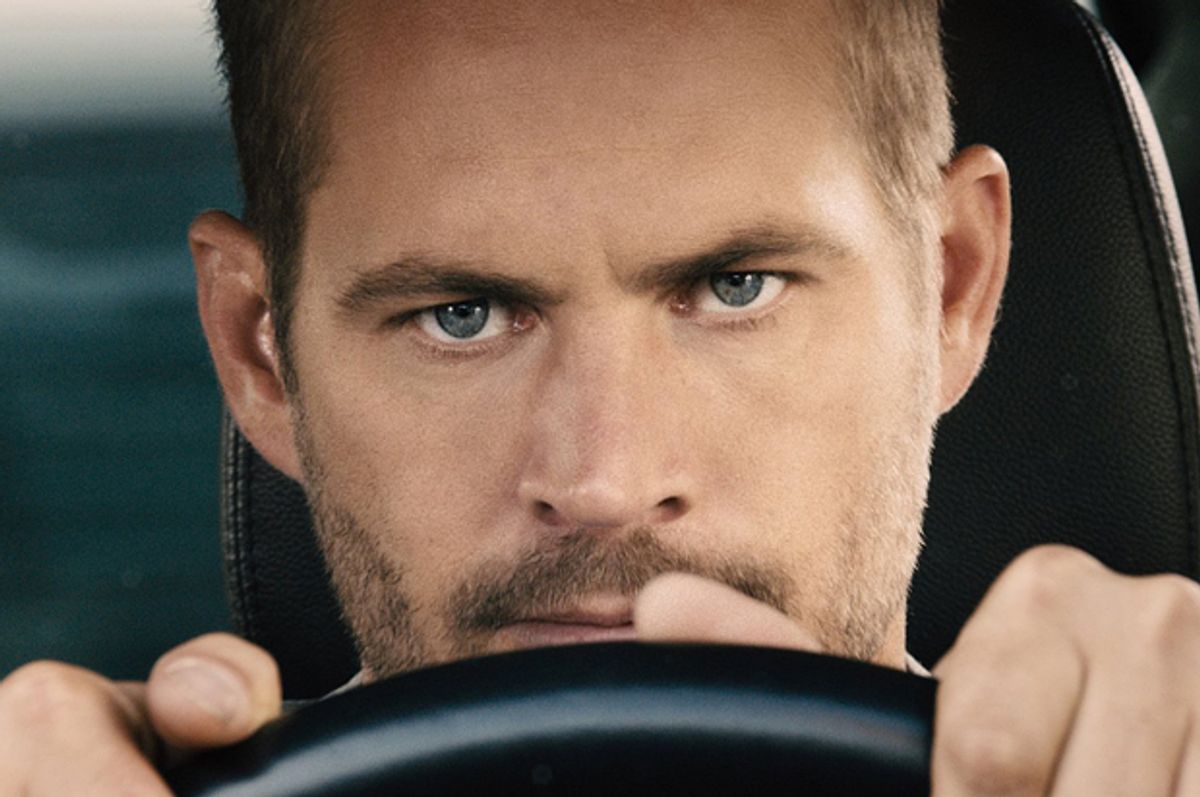 Within the first five minutes of “Furious 7” – which, in case you didn’t get the memo, is the seventh installment of a chameleonic Hollywood franchise that began with a cheap street-racing action film in 2001 and went on to conquer the globe – there are at least a dozen close-ups of women’s butts, shrouded in infinitesimal scraps of fabric. This isn’t a new obsession in cinematic history, as fans of Michael Bay’s work are aware, but Malaysian-born director James Wan, who inherits the “Fast & Furious” franchise from Justin Lin just in time for its great existential crisis, carries callipygian semiotics to new heights. He uses the butt-shot not merely to jack into the 17-year-old boy within all of us (or at least some of us) but also as a world-unifying signifier that transcends all boundaries of race or religion or nationality. We see bikini-clad derrieres in Abu Dhabi, for the love of God – shortly before we encounter the hijab-wearing martial-arts squad and watch a million-dollar Maserati jump from one high-rise tower to another, and then another, during the picture’s most jaw-dropping action sequence.

“Furious 7” often seems less like a movie than like a dog who won’t quit humping your leg. Yet the globetrotting ass parade and the flying cars high above the sands of deeply corrupt one-man states are only part of the story (using the word “story” in its loosest and most metaphorical sense). This movie concludes, nearly two and a half hours after the first pair of buttocks and the first turbocharged roar, with an extended sentimental montage that breaks the fictional frame to pay tribute to Paul Walker, the blue-eyed and handsome star who died (ironically or not) in a 2013 car crash.

Walker’s death is like the tail that wags the dog (the one humping our leg): An event that could have killed the movie has instead become its text, subtext and central subject. If he’s not in the film nearly as much as he was supposed to be, neither are Dwayne Johnson or Tyrese Gibson or Ludacris or Michelle Rodriguez, who all seem like extras in an extended, bathos-steeped Paul Walker tribute hosted by Vin Diesel. As the movie goes along, the meditation on artistic immortality (or monument to insubstantiality, depending on your perspective) gets increasingly bizarre. We watch Brian O’Conner, the long-ago LAPD detective turned street-racer and jet-set bandit, cheat death and outwit the bad guys over and over, determined to make it back to his fictional wife (Jordana Brewster) and their fictional baby, even as we know the whole time that the guy who plays him proved less indestructible.

Diesel’s recent comments about how “Furious 7” will win best picture at next year’s Oscars, “unless the Oscars don’t want to be relevant ever,” may sound ludicrous. OK, they are ludicrous, but only partly because reconstructing the movie after Walker’s death resulted in a nonsensical mess with two competing plots and no central character. To even begin to understand Diesel’s belief that “Furious 7” is clearly the biggest and best movie ever made, you have to adjust yourself to this film’s view of the world and its immense, dunderheaded ambition, which amounts to a relentless effort to convey every possible emotion in every scene.

As in the previous few pictures directed by Lin, much of this ambition is channeled through Diesel’s Dominic Toretto, who mutters cliché after cliché, crosses himself at someone’s funeral, wears faintly retro open-neck shirts and employs his chesty growl -- the sound of all Satan’s cockroaches scraping their wings against the walls of hell -- to deliver homilies about the importance of family. Of course, before we get all caught up in that family stuff, let’s take one more sinister assignment that involves killing people in Azerbaijan, stealing a flash drive from the aforementioned flying Maserati in Abu Dhabi and fighting an invading army of terrorists on the streets of L.A.

There can be no doubt that Wan (previously the director of the first “Saw” film and both chapters of “Insidious”) handles action scenes with tremendous verve, and largely relies on stunts and effects in real space and time rather than the limitless universe of CGI. Even amid its brain-dead incoherence “Furious 7” has two or three show-stopping chase numbers, and in terms of sheer visceral thrills outdoes most recent summer films without high-concept costumed characters. (Universal’s bet that “summer,” in movie-marketing terms, now extends to the frozen outer edge of spring is likely to pay big dividends.)

For a while, there was a distinctive freshness and libidinal energy to this octane-based, multiracial “Mission: Impossible” knockoff -- or at least it was slightly ahead of the cultural curve in a way that connected with a worldwide audience that Hollywood barely knew existed. I suppose the symbolism of the “Fast/Furious” universe, as it was reinvented by Lin and screenwriter Chris Morgan from the third film onward, seemed vaguely progressive, even if the storytelling was juvenile and the actual politics of the stories was somewhere between mendacious and meaningless.

But there was a crazy, violent undercurrent of anarchism or libertarianism or maybe just misanthropy in this series that you could feel as recently as “Fast Five,” and that has all been scrubbed away. Maybe that’s because of all the Chinese money injected into this installment or Hollywood’s new sense of global mission, which both dictate a retreat from any controversial material into stereotype. Or maybe it’s just because the movie was distorted by Walker’s death. At any rate, in “Furious 7,” our band of comic-awesome mercenaries basically get de-balled and become hired hands for the CIA, fighting generic villains out of a mid-period Bond film or a Shonda Rhimes soap. If this were the ’70s, they’d be partying with the Shah of Iran and the South Vietnamese generals.

Furious 7 Paul Walker The Fast And The Furious Vin Diesel