The left's real chance in 2016: How to win back foreign policy from the hawks

For 2016 Democrats, there's space to mount a progressive challenge to the party's establishment voices. Here's how 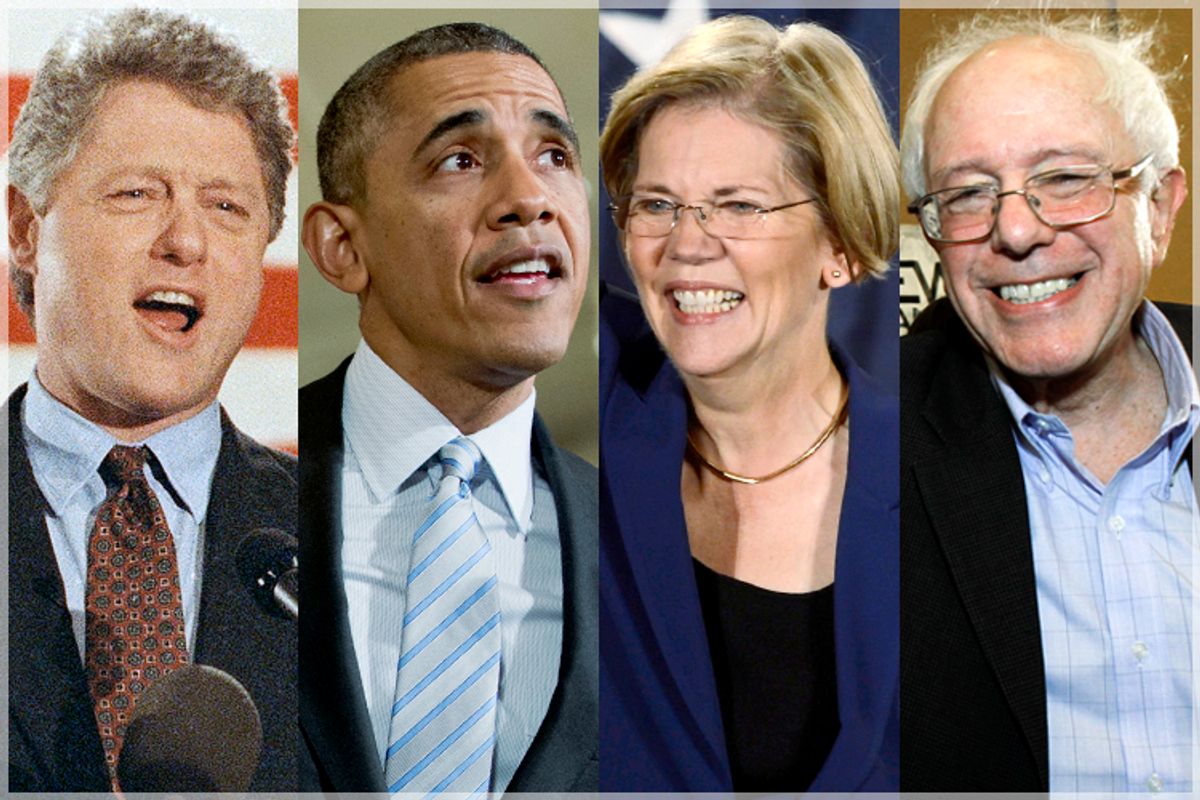 The absence of a serious challenger to Hillary Clinton’s 2016 presidential juggernaut allows for some fun thought experiments. For example: if someone were to actually try and mount a real campaign to replicate Barack Obama’s 2008 toppling of the Clinton machine, what might that actually, you know, look like? The New York Times tried to get a handle on this question by contacting “three of the smartest Democratic strategists we know” and asking them how they’d go about challenging Hillary.

The strategists (who remained anonymous because they’re terrified of Hillary and want to continue being able to find work) offered some compelling ideas. Economic populism was, of course, the first plank of the strategy – most people seem to agree that to take on Clinton, you have to come at her from the left on economic policy and adopt a strong, populist posture that pits the Democratic Party against Wall Street and the banks.

They also proposed picking an intra-party fight on immigration and attacking the White House and the congressional leadership for not passing an immigration reform bill in the early years of the Obama administration when the party had control of Congress and a supermajority in the Senate. That’d definitely be a bold play, but it also has the capacity to backfire a bit as it kinda takes the sting out of attacks on Republicans for torpedoing comprehensive immigration reform in 2013-2014.

Where the hypothetical strategy gets really interesting, however, is in the foreign policy realm. The Republican candidates for 2016 have made it perfectly clear that foreign policy will play a huge role in the GOP’s push to take back the White House. Jeb Bush has already given a big speech laying out his national security vision, and Marco Rubio is planning to run as the “foreign policy guy.” Hillary tends to be more hawkish than most Democrats (she pushed hard for intervention in the Syrian civil war, and there’s the whole Iraq war business), which means that the foreign policy debate headed into 2016 will be dominated largely by a discussion of how far it will shift rightward. That leaves a good deal of space for a candidate to argue for a strong, progressive foreign policy.

As the Times notes, Sen. Chris Murphy from Connecticut laid out the “organizing principles” for a progressive foreign policy earlier this year. Working within the framework Murphy laid out, a Democratic candidate could carve out a space in the national security debate that is distinct both from Hillary Clinton and Barack Obama. Here’s what Murphy had in mind:

A substantial transfer of financial resources from the military budget to buttress diplomacy and foreign aid so that our global anti-poverty budget, not our military budget, equals that of the other world powers combined. A new humility to our foreign policy, with less emphasis on short-term influencers like military intervention and aid, and more effort spent trying to address the root causes of conflict. An end to unchecked mass surveillance programs, at home and abroad, as part of a new recognition that we are safer as a nation when we aren’t so easily labeled as hypocrites for preaching and practicing vastly differently on human and civil rights. And a categorical rejection of torture, under any circumstances.

The key part here is the call for a longer view of foreign policy that eschews the sort of quick-fix actions that make for satisfying headlines but fail to address the root cause of problem. That’s precisely what’s wrong with the Obama administration’s foreign policy stance in the Middle East, which prioritizes drone strikes and alliances of convenience in taking on terrorist groups – the so-called “Yemen model” that has resulted in the near-total collapse of the Yemeni government.

On mass surveillance, the Obama administration hasn’t lived up to its promises to rein in the National Security Agency, and Hillary is being deliberately vague, at least for the moment, on what she would do as president regarding NSA spying, though before she became Secretary of State she was a critic of the data collection programs. There is a good deal of frustration to be tapped into over the NSA’s data collection methods, and a Democratic candidate who argues for ending or seriously rolling back those programs could, at the very least, make sure that Hillary also moves to the left on the issue.

Again, any sort of campaign to take on Hillary is, at this point, a long shot, so it may be best to look at this in terms of realigning the debate rather than derailing the Clinton campaign. It’s important to remember, though, that foreign policy – specifically, the Iraq war – is what ultimately brought down Hillary Clinton the last time. There may not be another Obama waiting in the wings, but there’s an opportunity for someone on the Democratic side to take up the progressive foreign policy standard and keep Hillary mindful of what the left flank of the party stands for.