The United States of Indiana: Discrimination is perfectly legal in America. Where's our outrage?

Want to address rampant discrimination against LGBTQ people? An RFRA "fix" doesn't even scratch the surface 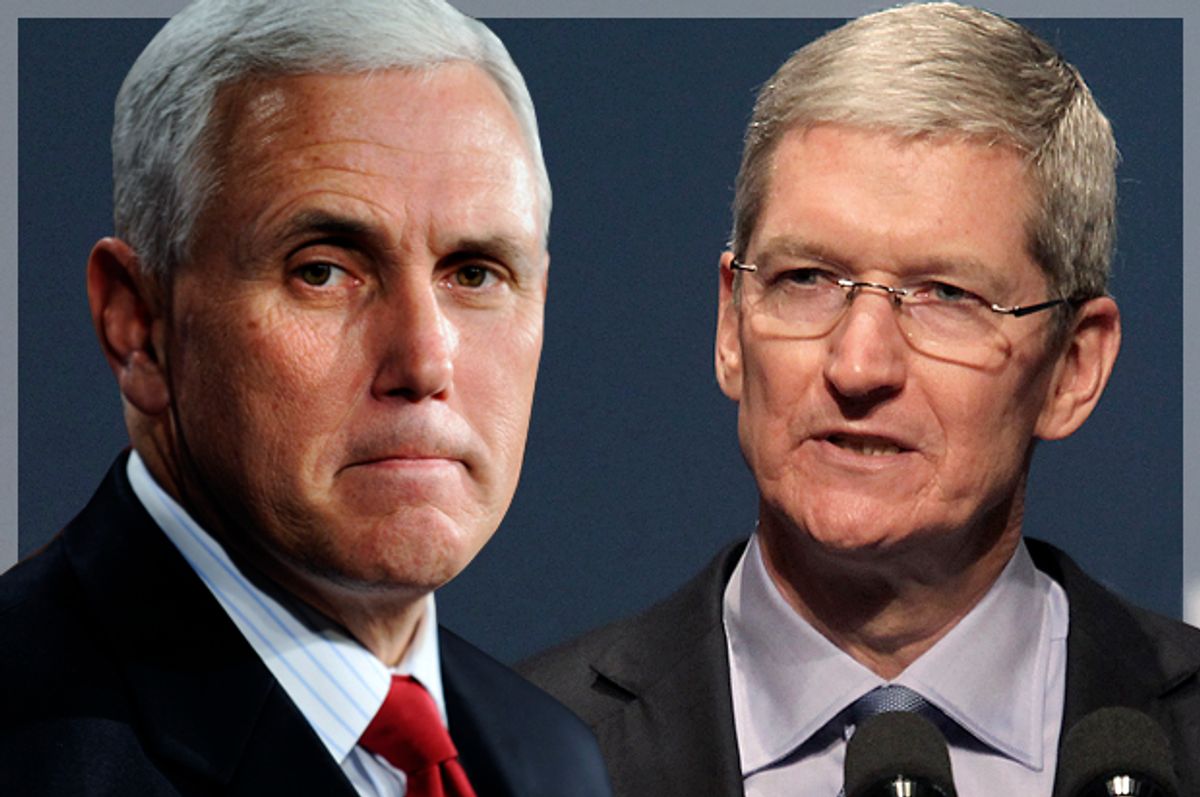 There has been a wave of public outrage in response to Indiana’s expanded version of the Religious Freedom Restoration Act, and with good reason. It is a transparent attempt to further enshrine anti-LGBTQ discrimination into state law, and the denials about intent coming from politicians like Republican Gov. Mike Pence just add insult to injury. If you’re going to actively discriminate against your neighbors, you may as well be honest about it.

But with all eyes trained on Indiana, it’s probably a good time to talk about the ways that such discrimination is already legal, and will remain legal, even if the state repeals the new law or makes whatever fixes have been promised. The same goes for much of the rest of the country. That’s because Indiana, like a majority of other states and federal law, has no protections in place for LGBTQ people.

We aren’t having the wrong argument about Indiana and “religious freedom” when we talk about caterers and photographers, we’re just having the smaller of what should be a much more expansive argument about how discrimination where we work, where we live and where we do business does real, daily harm.

As the Indianapolis Star argued this week in a front page editorial, a state law prohibiting discrimination in employment, education, housing and public accommodations based on a person’s sexual and gender identity would be a straightforward fix.

Beyond addressing people’s (entirely justified) anger that Indiana’s RFRA is essentially a hall pass to discriminate, such a law would make it illegal for employers to, say, fire a gay employee after she gets married and updates her employment forms to reflect her new marital status.

The ongoing and perfectly legal discrimination that LGBTQ people face at work, when seeking medical care and while trying to raise families often has nothing to do with flower arrangements or the choice between chicken or fish. And the business owners who refuse to cater a gay couple's wedding are the same people who decide who’s cooking in their kitchens and who can pass out bruschetta during cocktail hour. There's no change Pence could make to RFRA that would address that.

Equal marriage is the law in 37 states (and Washington, D.C.), but only 21 states have legislation banning anti-gay discrimination. So a lesbian couple can get married in Indiana, but they can also be evicted from the apartment they share. It’s a bizarre set of circumstances -- to have one part of your life left to such unpredictable factors like whether or not your landlord is a bigot -- and it’s the norm throughout much of the country.

It’s easy to understand why Indiana’s spin on RFRA has gotten so much attention (ditto for when this played out in Arizona, and as it currently plays out in Arkansas); it’s a gross assault on people who are just trying to live their lives. And with business owners now coming out of the woodwork to say that, yes, in fact, they can and would discriminate against gay couples, the sense of injustice becomes much more palpable than any abstract political talk about freedom of religion and polite tolerance.

The report on Memories Pizza went viral on Wednesday in part because it directly counters Pence's assurances that the law would not be used to discriminate. But also because it feels so personal. The shame and humiliation of being turned away by people in your community isn’t something that can be quantified, but listening to O'Connor callously talk about "that lifestyle" is an ugly reminder of what discrimination looks like in real time.

Getting married is generally considered to be one of the most important days in a person's life. So imagine having that experience ruined by some asshole who runs a pizza shop telling you that it’s nothing personal but he won’t work with you. But there is nothing less personal, or less wrong, about having your résumé passed over because of your affiliation with LGBTQ rights groups.

Our tunnel vision here can in part be explained by the fact that the mainstream movement for gay rights has long been framed -- almost exclusively, in fact -- as a fight for equal marriage. When the dominant conversation is all about the freedom to marry and not, say, about an economic justice agenda for trans* people or addressing homelessness among LGBTQ youth of color, it's easy to forget that it's only one piece of the pie.

And this limited sense of justice shapes what resistance looks like. Any moment of massive upheaval against discrimination is a good thing, but it's telling that businesses like Angie's List and Apple are standing against this law and not any number of other policies that violate LGTBQ people's rights and dignity.

Artists have joined the protests, too. In a statement on why they would be canceling an upcoming Indiana tour date, the band Wilco said:

Hope to get back to the Hoosier State someday soon, when this odious measure is repealed. Refunds available at point of purchase.

And they are absolutely right. Indiana’s RFRA is discrimination dressed up as religious freedom. But so is the state’s lack of protections for gay workers. (It’s pretty hard to host a pizza-themed wedding if you don’t have a job to pay for any of it.)

There is nothing more frustrating (or pointless) than being lectured about why the thing you are angry about isn’t the thing you should be angry about. This kind of zero sum approach to giving a basic shit about the world assumes that empathy or organized political action is such a scarce resource that it needs to be saved up for when it really matters. It's a false choice.

As my colleague Luke Brinker pointed out this week, Mike Pence and state Republicans are squirming right now because organized resistance works. Wilco and Apple and regular people in Indiana and around the country should keep holding lawmakers' feet to the fire until they make good on their promise to “clarify” the intent of RFRA. And when that happens, they should keep demanding, just as loudly, that LGBTQ people have the basic right to support themselves and their families without fear of being arbitrarily fired.

Anyone who is married or plans to get married (or is just in any kind of long-term relationship, really) knows that building a life with someone is about much more than whom you choose to cater your wedding or plan your seating arrangements. It's about the jobs that will support your family, the schools that will educate your kids and a million other banal details that make up your entire future. Any call for justice for LGBTQ people -- in Indiana and the rest of the country -- should be just as expansive.