Gay Boy Scout leader hired in New York: "We said yes to him irrespective of his sexual orientation" 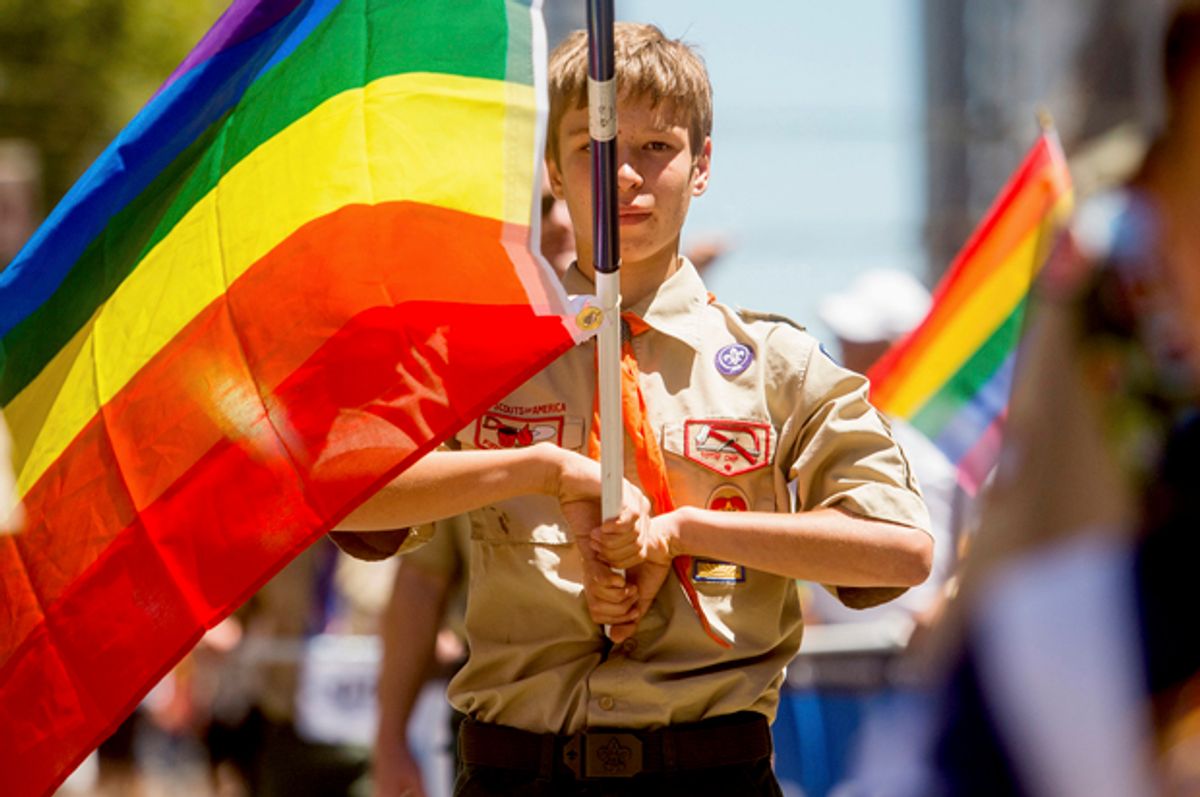 Pascal Tessier is an 18 year-old Eagle Scout. He's also gay. He's going to work at a Boy Scout camp this summer. This should get interesting.

Over the past few years, the Boy Scouts of America has been making slow, awkward strides towards revising its bizarre-for-this-century policy that "We do not grant membership to individuals who are open or avowed homosexuals." Two years ago, the organization tested the waters when it issued a survey asking members how they'd respond in situations that "could happen if the Boy Scouts keeps or changes its policy." It then followed up with the seemingly progressive edict that "No youth may be denied membership in the Boy Scouts of America on the basis of sexual orientation or preference alone" -- but failed to include that welcome to gay adults, stating firmly that "The adult membership standard remains unchanged." And it added, "Discussions of sexual preference have no place in Scouting. Nor is the promotion, overtly or otherwise, of sexual politics or preferences allowed in the program. Simply put, while a youth member may acknowledge his or her sexual preference, that acknowledgment may not reach the level of distraction, which may include advocacy, promotion, or the distribution of information of a sexual nature. This same standard applies to all youth members of the BSA, regardless of age or sexual preference." Look, it's fine if you want to cloak your institution in chastity, but could you do us all a favor and not pretend that there's a whole lot of concern about heterosexuals creating "distraction" with their "sexual politics"? Just admit that's not a codicil aimed at the straights.

Since the policy change, the Boy Scouts' updated policy has become a contentious source of confusion -- it essentially says that gay Scouts must potentially forfeit their years of effort and commitment when they become adults. As former scout James Dale said in 2013, "This doesn’t give younger gays a future. The Boy Scouts are still sending a destructive message… You can't have half-discrimination." And Paul Tessier himself has very publicly made similar observations. When he became an Eagle Scout, he told the Washington Post, "It’s kind of a backhanded acceptance: We accept you for now." Then, when he turned 18 last year, he wrote a farewell letter to the Boy Scouts, thanking it for instilling his "morals and values" but acknowledging, "I am no longer eligible to be a Boy Scout because I am gay. Despite the Boy Scouts’ historic decision last year to open its ranks to gay youth, the Scouts still ban gay adults. And as of today, that means me."

Now, however, he's trying to return to the Scouts – and to take a stand for other members – as a New York state affiliate is openly bringing on Mr. Tessier for the summer position. Greater New York Councils board member Richard G. Mason told the New York Times Thursday, "This young man applied for a job. We judged his application on the merits. He’s highly qualified. We said yes to him irrespective of his sexual orientation." The Boy Scouts' national spokesman, Deron Smith, has not yet officially commented on the move, but says, "While we were only recently made aware of this issue, we are looking into the matter."

The hiring could provoke a legal showdown – or at least a back-to-the-drawing-board examination of the flawed current policy. Zach Wahls, executive director of Scouts for Equality, says that "About 30 other councils across the country have publicly opposed the ban on gay adults. The Greater New York Councils is the first to actually publicly acknowledge that it had in fact hired a gay adult leader. A lot of councils have talked the talk. Now the New York Councils is walking the walk."

Equality does not have a cutoff point. Acceptance isn't something to be grown out of, like a cast-off Cub Scout uniform. The Boy Scouts of America is now going to have its hand rightfully forced on that point. And the question it's going to be held accountable for is this – If you believed in a young man's character and capability two years ago, why wouldn't you be honored to have him working with you now?