There's progress in giving girls more shots at science, but then what? 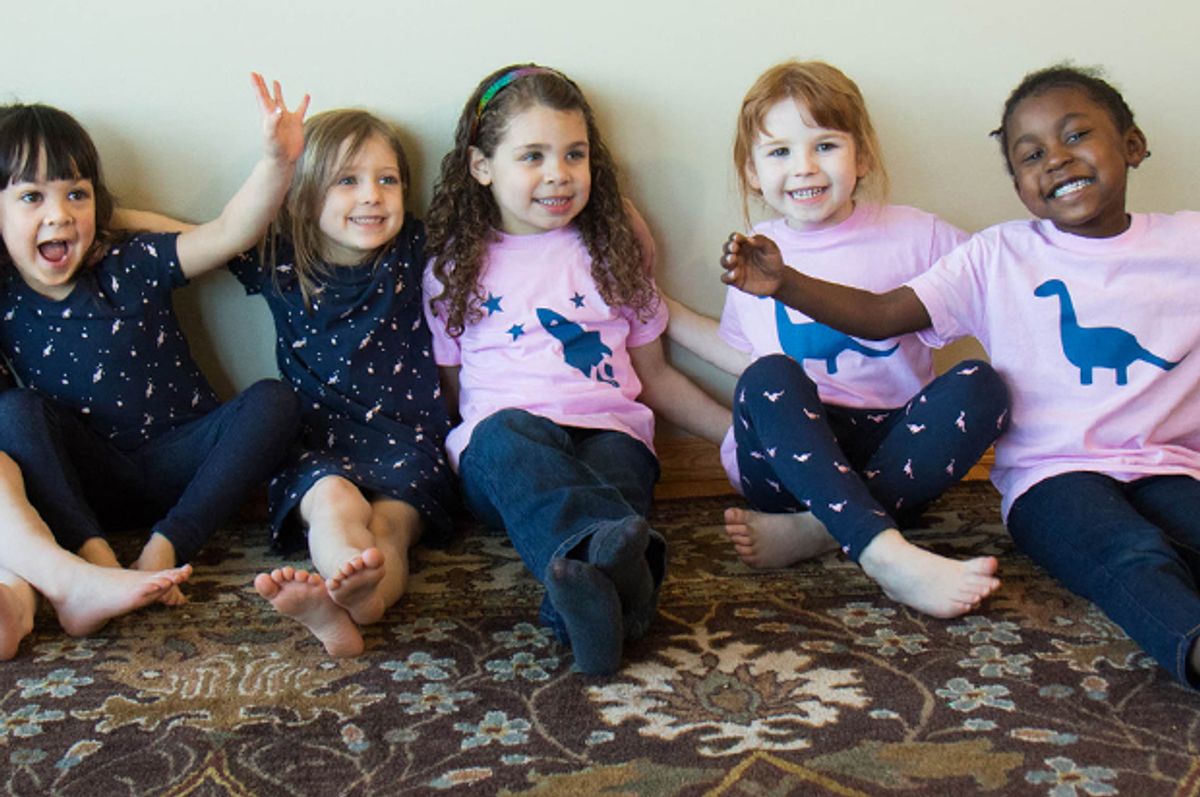 It's going to take more than some rocket ship t-shirts to close the gap for girls and women in science and technology. But hey, it's a start.

It's been, if not a good week for the advancement of females in traditionally male dominated pursuits, at least not anywhere peak Gamer Gate levels of soul crushing. First, there was the news of the launch of Washington state moms Jennifer Muhm and Malorie Catchpole's science-centric girls' clothing line buddingSTEM. (STEM is the shorthand for science, technology, engineering and math – fields in which females from preschoolers to PhDs routinely face staggering amounts of discouragement and discrimination.) Inspired by their own children's interests and featuring some damn cute designs, the entrepreneurs are trying to address the ongoing divide in children's clothing – the messages that start super early that boys can be heroes but girls should concern themselves with their fat thighs. As Muhm told ABC News, "We’re not anti-princess. We’re not anti-pink. We’re not anti-girly. We just think there needs to be more than just that offered for our girls." And there was another positive development this week when the addictive Cards Against Humanity announced the release of a new Science Pack. The proceeds from which will go into a Cards Against Humanity Science Ambassador Scholarship for women applying for STEM degrees – and chosen from a panel of forty female scientists.

It's all yet another sign of the subtle shift in consumer demand. Last year, LEGO, home of the popular, traditional sex role-friendly "Friends" line, introduced a limited edition science themed "Research Institute" kit with a female paleontologist, astronomer and chemist. It quickly sold out. And after a New Jersey mom asked Land's End "Why are you selling ‘mighty’ tees for boys and ‘adorable’ tees for girls?" it promptly responded with NASA themed clothes for girls. But science amply demonstrates that nothing can thrive in a vacuum – even encouragement.

The way that STEM education and opportunity plays out for males and females in our country is vastly, embarrassingly different. A US Department of Commerce report notes that "Women hold a disproportionately low share of STEM undergraduate degrees, particularly in Engineering" and that among those who do, "Women with a STEM degree are less likely than their male counterparts to work in a STEM occupation; they are more likely to work in education or healthcare." Why? The reasons are numerous and complex, but among them are "a lack of female role models, gender stereotyping, and less family-friendly flexibility in the STEM fields." And as Cards Against Humanity's Josh Dillon told ThinkProgress this week, "People say there are fewer women interested [in STEM], and maybe that’s true today. But we should ask why. And the answer is probably that women at some point in their career are discouraged from pursuing the sciences." Case in point: Cate Burlington's appalling, hilarious recent "Things My Male Tech Colleagues Have Actually Said to Me, Annotated" –many of which are riffs on her final example, "You're a girl, but you're not, like, a girl-girl, y'know?"

And that, in a nutshell, seems to be biggest obstacle of all. STEM education and work are still treated as fields that girls might, if they are vocal enough and determined enough and exceptionally gifted, be permitted to share with males. They are treated as masculine pursuits, and females who succeed in them are expected to succeed on a very limited and very male set of terms. This is a problem, because you can't get girls and women into STEM fields until you look at what's so damn uninviting about the field in the first place. You have to look at policies that are hostile to maternity leave and childcare. You have to look at science's long history of dangerously faulty presumptions about the masculine as the default. You have to look at a culture that has barely budged in the ten full years since Meg Urry wrote in the Washington Post, "Discrimination isn't a thunderbolt, it isn't an abrupt slap in the face. It's the slow drumbeat of being underappreciated, feeling uncomfortable and encountering roadblocks along the path to success." You have to understand what constitutes a hostile environment and then not stand for it, for the sake of the two thirds of the women in science and tech who say they've been sexually harassed. That involves not just encouraging girls and women to think differently -- but doing that for boys and men too. It means teaching and hiring and working together in ways that stop treating math and science like they have a gender. You can't lift up girls unless you prepare a sustainable place for them to be lifted up to. And that is work for all of us.