The right's "cake" insanity: You won't believe how it's trying to deflect the Indiana backlash

How absurd have Republicans gotten in their defense of "religious freedom" laws? They now argue "cake is speech" 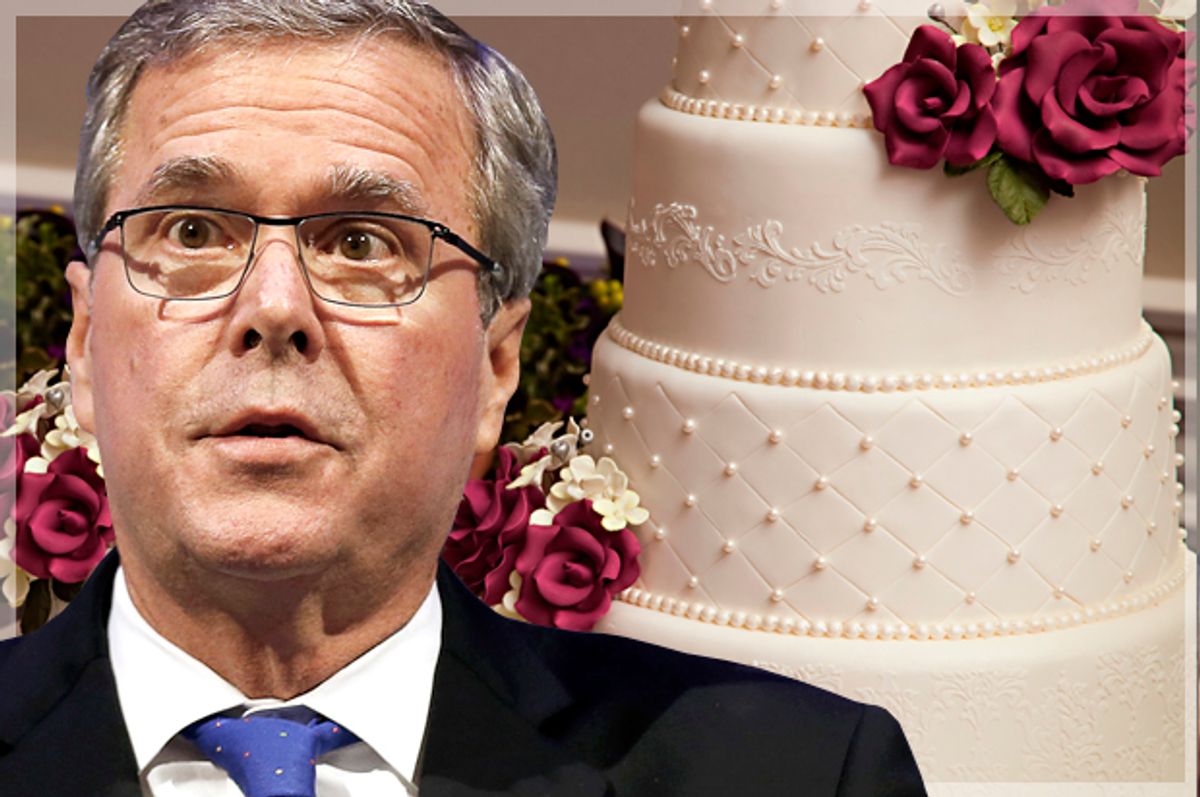 But as the day went on, it became clear that Overton’s argument wasn’t some fringe theory: It’s shaping up as a core tenet of one “compromise” approach to religious freedom laws that’s under consideration, in the wake of the backlash to the Indiana law, which Overton fervently supported as written. It’s at the heart of the fix to the law Jeb Bush pushed Wednesday night with pro-gay rights Republican donors.

Here’s how the pastor tried to explain it: Critics who say Indiana's Religious Freedom Restoration Act would let businesses routinely deny service to LGBT Americans are wrong. “I don’t think any RFRA anywhere would say, ‘I’m not gonna give you a hotel room, I’m not gonna give you a hamburger, or gasoline or groceries,'” Overton told Inskeep. “That’s outside the bounds.”

But just as a religious leader should be able to decide, according to the tenets of his or her faith, whether to preside over gay marriages, Overton argued, so should a florist or a baker get to decide whether his or her “artistic ability” should be part of a gay wedding.

I think most Americans would agree that a pastor like myself should not be compelled by the government to use my speech to support someone else’s perspective. I think that has parallels to the cake maker. The cake maker is using his or her artistic ability to make a cake and that cake communicates something. I think that cake is speech, that says ‘we celebrate this union.’ I just don’t think they should be forced by the government to use their speech to support someone else’s perspective….I would like the line to be drawn in services that involve speech.

When Inskeep asked how society would determine what type of service represented “speech,” Overton punted and said that would be up to courts. “I think that distinction will be played out in the court,” he replied. “All the legislature can do is pass principles to guide the court.” (Remember when the right hated activist judges?)

I admit: I thought Overton’s was a fringe point of view when I first listened. And then I received the transcript Jeb Bush’s campaign released to share his remarks, to Silicon Valley donors, about how he would like to clarify Indiana’s law – a law, by the way, that he said needed no clarification just two nights before. Here’s the key part:

I do think if you’re a florist and you don’t want to participate in the arrangement of a wedding, you shouldn’t have to be obliged to do that if it goes against your faith because you believe in traditional marriage. Likewise if someone walked into a flower shop as a gay couple and said I want to buy all these off the rack, these flowers, they should have every right to do it. That would be discrimination. But forcing someone to participate in a wedding is not discrimination; it is I think protecting the first amendment right.

So Bush, too, tries to define “discrimination” as turning someone away from a flower shop, versus a protected “First Amendment right” to refuse to participate in a wedding.

I can’t imagine how such a compromise would work in the real world. On the one hand, it would force an LGBT bride or groom to tell a florist or a baker, “Oh, by the way, this is a GAY wedding, and I hope you don't have any problem with that.” Otherwise if they figured it out along the way, it would seem they could legally back out, and leave the marrying couple up a creek. (And imagine if you had to tell a florist: “Oh, by the way, I’m a Catholic, and I hope you don’t have a problem with Catholic weddings.”)

But let’s say some kind of compromise worked there – maybe the burden would be on the florist or baker to tell all prospective clients: “We don’t serve gay weddings -- or Catholic weddings!” (I think that’s a preposterous compromise, but work with me here.) What stops a hotel owner, or a pizzeria proprietor, or a gas station franchisee, from saying, "My work is a form of expression, too -- and I don’t want to express support for gayness by providing my services to these individuals?"

Meanwhile, Rick Santorum thinks a photographer has the clearest case to turn down an LGBT wedding, and a baker has the worst.

If they’re the only baker in town, they should bake the cake. If there’s someone, if they have a, if someone has a ferry service onto an island, and that’s where the wedding is, and you’re the only way to get to that island, there’s no road to the island, well, you’ve got to provide the service. But if the person has other opportunities to go other places, my feeling is that people shouldn’t be forced to participate in a ceremony that violates their religious tenets and teachings. Now you’re right. The cake baker is the most attenuated, and probably has the hardest argument to make. The photographer has the easiest argument to make. But I think in a world where have true tolerance, and we allow people to live their faith in their jobs, then I think we allow space for everybody unless there’s a compelling interest not to.

Santorum was mum about the florist, even though Hugh Hewitt specifically asked him about it.

The only way out of this moral and political cul-de-sac involves passing religious freedom laws along with laws that prohibit discrimination on the basis of sexual orientation or gender identity. But so far, Indiana Gov. Mike Pence is holding firm in opposing such a move. Now, Indiana-based Angie’s List is saying it won’t accept that state’s compromise RFRA, which would reportedly add some kind of preamble, but not actually add discrimination protection to state law. (For the record, the head of Salesforce as well as the Indiana Pacers earlier said they would accept the compromise.)

For the far right, of course, even Indiana’s compromise is going too far. (Santorum is "disappointed" in his "dear friend" Mike Pence.) My friend Greg Sargent thinks it’s progress that some space has opened up within the GOP to at least debate these issues, and I guess that’s true. But the religious freedom argument should be simple: If your religion tells you it's wrong to be gay, then don't have gay sex, or get gay married. It’s amazing to watch Bush and others contort themselves to make floral arranging and cake baking a form of religious expression, to pander to the far right, though it's not likely to work. This debate will get sillier before it’s settled.