Like the segregationists of the 1960s, advocates of the RFRA truly believe they're honoring their religious faith 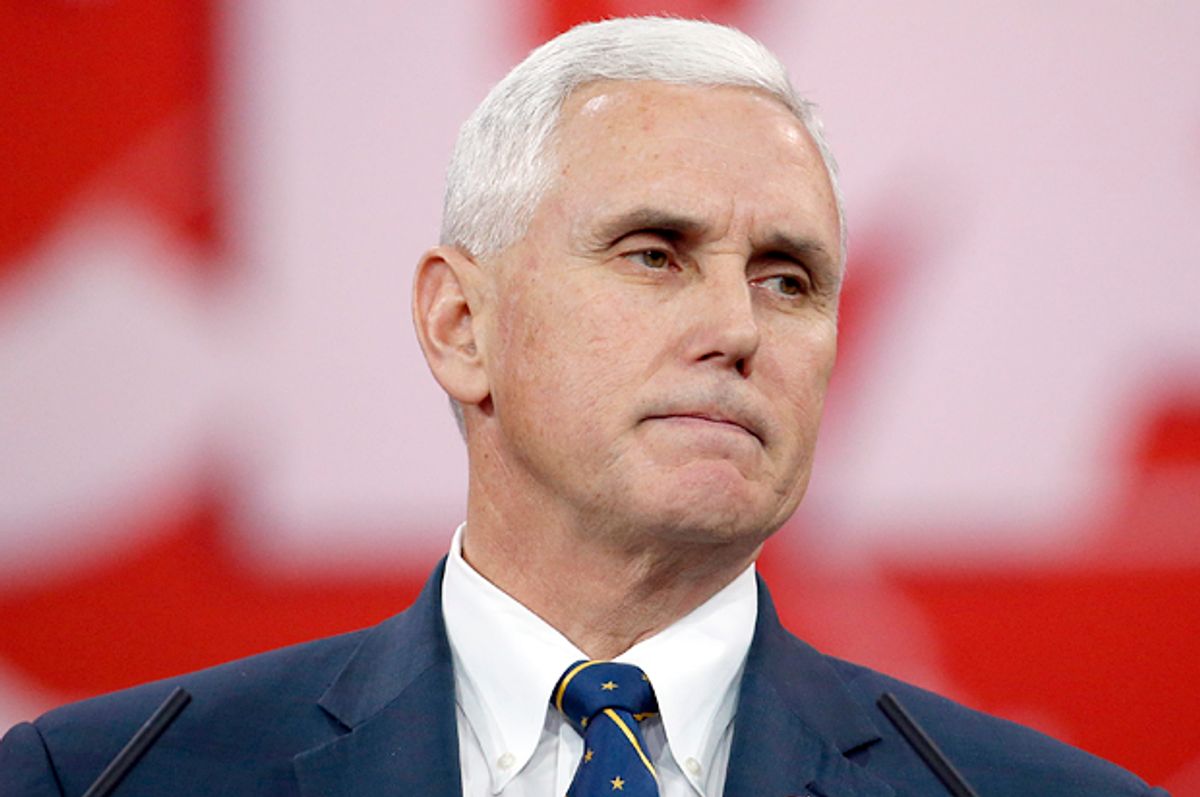 Indiana’s Religious Freedom Restoration Act is so obviously structured to enable discrimination against LGBTQ people that quotes from the Onion and the governor’s office are almost indistinguishable.

Much has been made of the fact that Indiana’s law pushes beyond the bounds set by the federal law of the same name. It explicitly grants religious personhood to for-profit businesses. It also expands religious immunity to disputes between private individuals. The combination should make it difficult for those who are harmed by discrimination or other “religiously motivated” behavior to obtain redress in civil court.

But while Indiana’s law pushes farther than earlier statutes, Christian conservatives had good reason to think they could get away with it, namely the fact that religious “conscience creep” has been trending ever since the Supreme Court passed a federal Religious Freedom Restoration Act in 1993.

Not Just About Bigotry and Homophobia

In recent years, religious believers have sought and largely won a cascading array of rights, privileges and exemptions from laws and duties that otherwise apply to all Americans.

Liberal people of faith who don’t share the dominionist goals or moral priorities of fundamentalists often are appalled by these objectives and many insist that laws like the one recently passed in Indiana aren’t about religious freedom but rather bigotry itself, or misogyny, or some other morally tainted and self-serving mindset. They are both right and wrong.

Yes, these laws do condone bigotry, and misogyny, and other ugly prejudices. But the photo of those present at the signing of Indiana’s bill—its major proponents—is telling. It mixes white male politicians in suits with a proud array of Catholic nuns in habits, monks in cassocks and an orthodox Jew in a top hat. Like many of those advocating segregation during the Civil Rights Movement, the advocates of this bill are genuinely motivated by devout religious beliefs.

In an ideal world, civil laws that seek to promote the general welfare and religious codes might be aligned, and even in our imperfect world religion often promotes generosity, kindness, service, and conscience-driven behavior. But the world’s major religions all have ancient roots, and thanks to the rise of literacy during the Iron Age, they all have sacred texts that anchor believers to an Iron Age set of social scripts and moral priorities including some truly horrific ideas.

The Christian Bible endorses slavery, racism, tribal warfare, torture, the concept of women and children as chattel, and the death penalty for over 30 offenses. (You likely qualify.) It offers an exclusive alternative to eternal damnation, driving believers to seek converts when and where they can. It teaches that infidels have no moral core and advocates separation from religious outsiders. It elevates sexual purity to the level of moral purity. It makes a virtue out of certitude. Small wonder, then, that sincere believers seeking to do the will of God sometimes end up seeking the right to do harm.

Per SCOTUS, Sincere Belief Needn’t be Mainstream or Factual

Modernist Christians may claim that biblical literalism is a flawed form of faith. But in the absence of some external standard, fundamentalists have as much right as anyone to claim that theirs are religious values, and the Supreme Court has said as much.

In the Hobby Lobby case, the Catholic majority ruled that “sincerely held” belief was sufficient to merit protection under the umbrella of religious freedom, even if the sincerely held belief in question was factually inaccurate and not mainstream or required by the person’s sect. Religious belief, in other words, is whatever the believer says it is, and until we repair the gaping crack in our secular democracy, it confers a powerful set of privileges, which means that the limits of credible belief are bound to be tested.

Almost universally, the religious freedom claims pursued in the U.S. over the last two decades seek the freedom to do harm, most often the freedom to harm queers, women, children or religious outsiders or our secular government institutions.

Ironically, one reason that modern religious freedom claims so often seek the right to do harm is that other kinds of religious belief and practice are so well established. For over 200 years, core religious freedoms have been protected by law in the United States. America’s founders carefully secured the right of citizens to believe, think, and assemble for worship as they chose—or to publically deny that they belonged to the religious majority without being excluded from the power and privilege of public office.

Like all of America’s founding ideals, these protections at first applied almost exclusively to white males of European origin, and it would take two centuries of struggle before Blacks, Native Americans, and practitioners of other religions would fully secure the full rights of personhood and citizenship, including freedom to think and worship as they saw best. In the intervening years, some religious minorities, and Native Americans in particular suffered horrendous religious persecution by the Christian majority.

But today, for the most part Americans have an almost unprecedented levels of freedom to believe and worship as we see fit. An American citizen or resident can hold a spiritual worldview that is shared by a community or deeply idiosyncratic. We are free to adhere to all manner of wild and wacky superstitions, and we do. Alternately, we can use a dozen or more labels to identify ourselves as non-religious. We are free legally to renounce our childhood religion and try a new one. We can teach our beliefs to our children and recruit converts on street corners. We can do all of this without fear of being imprisoned, lashed, tortured, stoned, drowned, beheaded, or burned at the stake.

In contrast to people living in Christian Europe during past centuries, Americans take these rights for granted, so much so that we forget that these freedoms were precious and new to many who immigrated here to escape religious persecution.

By contrast with enduring protections for religious belief and assembly; religiously motivated behavior historically has been constrained by U.S. law for compelling reasons including the following:

It is these restrictions that are now being challenged by religious adherents, and the second of these makes it clear why so many religious freedom claims seek the freedom for a religious individual or organization to cause harm with impunity.

During most of American history, boundaries around religious freedom were upheld by the courts so long as the rules applied equally to all, and Jefferson’s “wall of separation” worked to insulate government from control by a church hierarchy. But a successful religion, like rain on the roof, seeks any crack through which it can penetrate into our public structures and private homes.

In 1993, the misnamed Religious Freedom ‘Restoration’ Act, subtly changed a long time standard, allowing religious practitioners to violate laws that otherwise apply to all; and a cavernous crack appeared. In the words of Justice Anthony Kennedy,

[RFRA’s] sweeping coverage ensures its intrusion at every level of government, displacing laws and prohibiting official actions of almost every description and regardless of subject matter. . . . Any law is subject to challenge at any time by any individual who claims a substantial burden on his or her free exercise of religion. Such a claim will often be difficult to contest….All told, RFRA is a considerable congressional intrusion into the States’ traditional prerogatives and general authority to regulate for the health and welfare of their citizens.

Although RFRA was ruled unconstitutional  as it applies to the states in 1997, it continues to be applied to federal statutes, and modified versions of the bill have been introduced in most states. Since 1993, devout believers have been doing all in their power to pry the crack wider, using tools including federal and state legislative processes, courts, control of public accommodations like hospitals and schools, and investments in sophisticated legal advocacy infrastructure.

Some Eastern religions teach an overarching principle against which religious conscience claims might be weighed. In Tibetan Buddhism, for example, this principle is compassion. In the Jain religion, it is ahimsa, meaning non-harm.

Christianity, on the other hand, has always been torn between those who insist that the overarching principle is love, as articulated in the Great Commandment, and those who insist it is right belief, as expressed in the “Sinner’s Prayer.” Many Evangelicals feel a non-negotiable responsibility to seek converts, as instructed in the Great Commission, which advises followers of Jesus to “make disciples of every creature.” Some perceive a God-given mandate to seize the reins of power, ruling according to biblical principles, a view called dominionism.

Christians are divided also, in their view of the Bible. Some understand the Bible as a human document, one that records the struggle of our ancestors as they sought to grasp timeless truths through a lens darkened by fallibility and culture. Others see it as the literally perfect Word of God, essentially dictated by God to the authors.

The Bible’s contradictory prescriptions, together with differences in how Christians understand biblical authority mean that almost anything can be claimed as a religiously motivated behavior. But even if Christianity’s more than 30,000 denominations could reach consensus about how to assess the merit of religious conscience claims—which they can’t--the problem would remain. The U.S. is home to people of all faiths and none at all, each of whom has his or her own deeply held values and a constitutional right to whatever spiritual worldview he or she may hold.

Around the world, through most of human history, societies have so feared offending supernatural powers that they forbade and punished religious deviance, even by death, lest divine wrath befall the community as a whole. By contrast, the United States Constitution and related documents were products of the Enlightenment, created by a coalition of nontheists, deists, and Christians. While it is true that some populations such as pagans and Native Americans have suffered shameful persecution and oppression at the hands of the Christian majority, in principle, religious freedom has long been broadly protected by law in the U.S. except where it infringes human wellbeing or harms civil society itself.

But some religiously motivated behavior does harm human wellbeing or civil society. In fact, some forms of belief obligate adherents to infringe the rights or wellbeing of others. They are fundamentally incompatible with the radical idea that each person is entitled to life, liberty and the pursuit of happiness. Religious conservatives aren’t simply inventing their appeal to religious conscience; unfettered religious freedom really does mean the right to discriminate, the right to deny medical care, the right to interfere in an outsider’s dying process, the right to beat children, and more.

We may want to believe it is possible to grant boundless freedom of religion to some without impinging on the corresponding freedoms of others, but this simply isn’t the case. Those who love this country, and those who lead, have some tough choices to make.