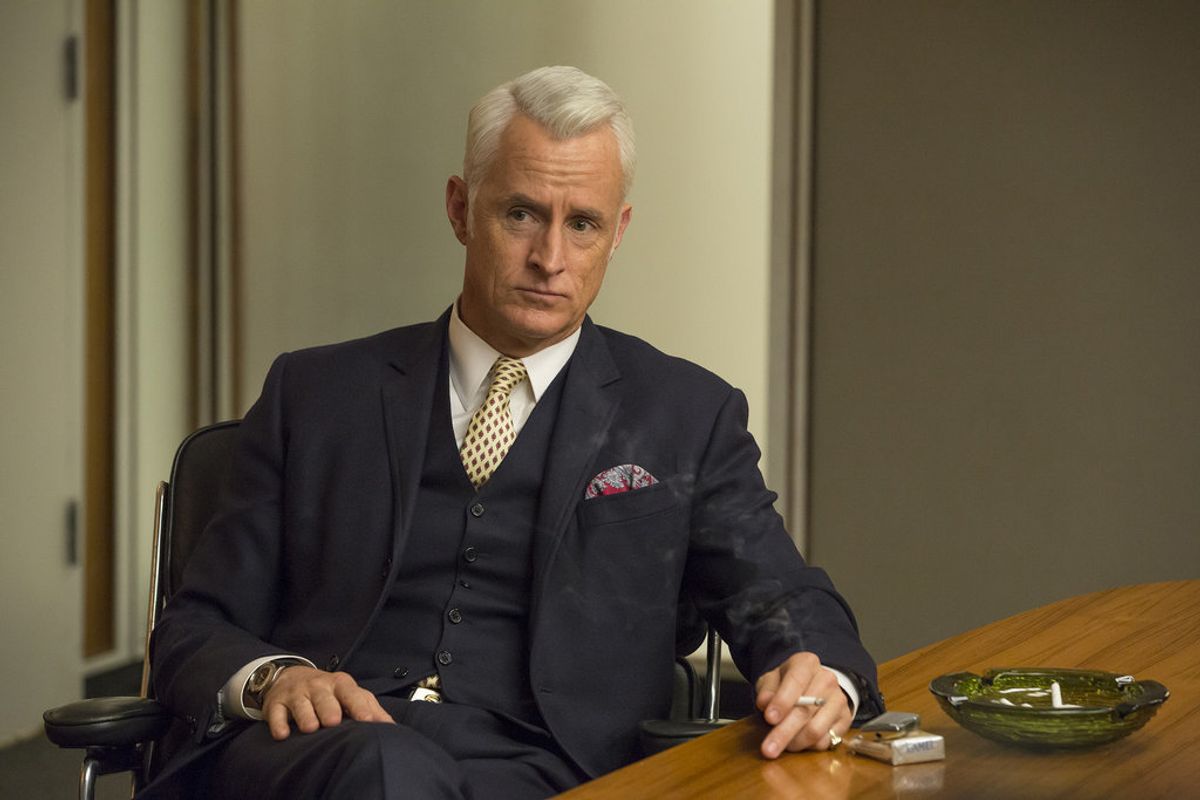 But, above all else—above being the silver fox of advertising and the white-gold weasel of women—Roger Sterling is the platinum possum of notable quotables. And it’s why he’s so loved, and so revered, even at his most offensive. It’s because Roger can say the things no one else can. At his quippiest, he spares no one. Not pregnant Betty, not suicide victims, not JFK, not even himself. And it’s really quite endearing how awful he can be.

To Jews:  “How Jewish are they? You know, Fiddler on the Roof: audience or cast?”

To African Americans: “Is it just me, or is the lobby full of Negros?”

To women (after Don Draper asks what it is women really want): “Who cares?”

To Hispanics: “We’re conquistadors. I’m Vasco da Gama and you’re…some other Mexican. We’re gonna land there, buy whatever they’ve got for the beads in our pockets. Our biggest challenge is to not get syphilis.”

To God: “Who knows why people in history did good things? For all we know, Jesus was trying to get the loaves and fishes account.”

To himself: “Don, come on. Alone, I’m an escapee from some expensive mental institution.”

And (threefold) to amputees: “My uncle lost his leg hitching a trailer. He used to ask me to scratch his toes. He didn’t have any.” “A wooden leg! They’re so cheap, they can’t even afford a whole reporter.” And after Paul Kinsey says post-lawnmower accident: “He might lose his foot,” Roger replies with: “Right when he got it in the door.”

Why does Roger say what he says? It’s possible it’s a form of brilliant, vodka-soaked, corporate Tourette’s, but more likely it’s because he has no fucks, no damns, no shits, no asses of rats to give. He is unapologetic. He seeks no validation. For Roger, approval, like psychiatry, is just “this year’s candy-pink stove.” But unlike Don, Roger isn’t cold, he’s dry. And unlike Don, Roger isn’t miserable, he’s blasé. For someone who could have turned into a whiny, entitled, rich kid, Roger has turned out like the advice he once gave Don: “Be slick. Be glib. Be you.”

What does this final season hold for him? For good, I believe he’ll end up with Joan. For worse, his daughter with the Manson clan. Maybe he’ll trade his silk vest for one that’s fringed, his wingtips for moccasins, and he’ll go on that “trip” he’s been meaning to take. Maybe he’ll pen a sequel to his memoir. You know the one: “Sterling’s Gold,” in which he details an incompetent doctor’s unintentional castration of Bertram Cooper, among other things. Or maybe he’ll just take Kevin to the Central Park Zoo to watch the jaguars and remark. “Look son: ‘At last something beautiful you can truly own.’”

Whatever happens. We’ll miss you Roger. Your absence will feel like that empty bottle you waved around in Season One and bemoaned “Can something be done about this sadness?!”

Or rather: Roger, Roger. Over and out.