When Coretta Scott King alleged the feds' involvement in her husband's death, the scary truth was she was right 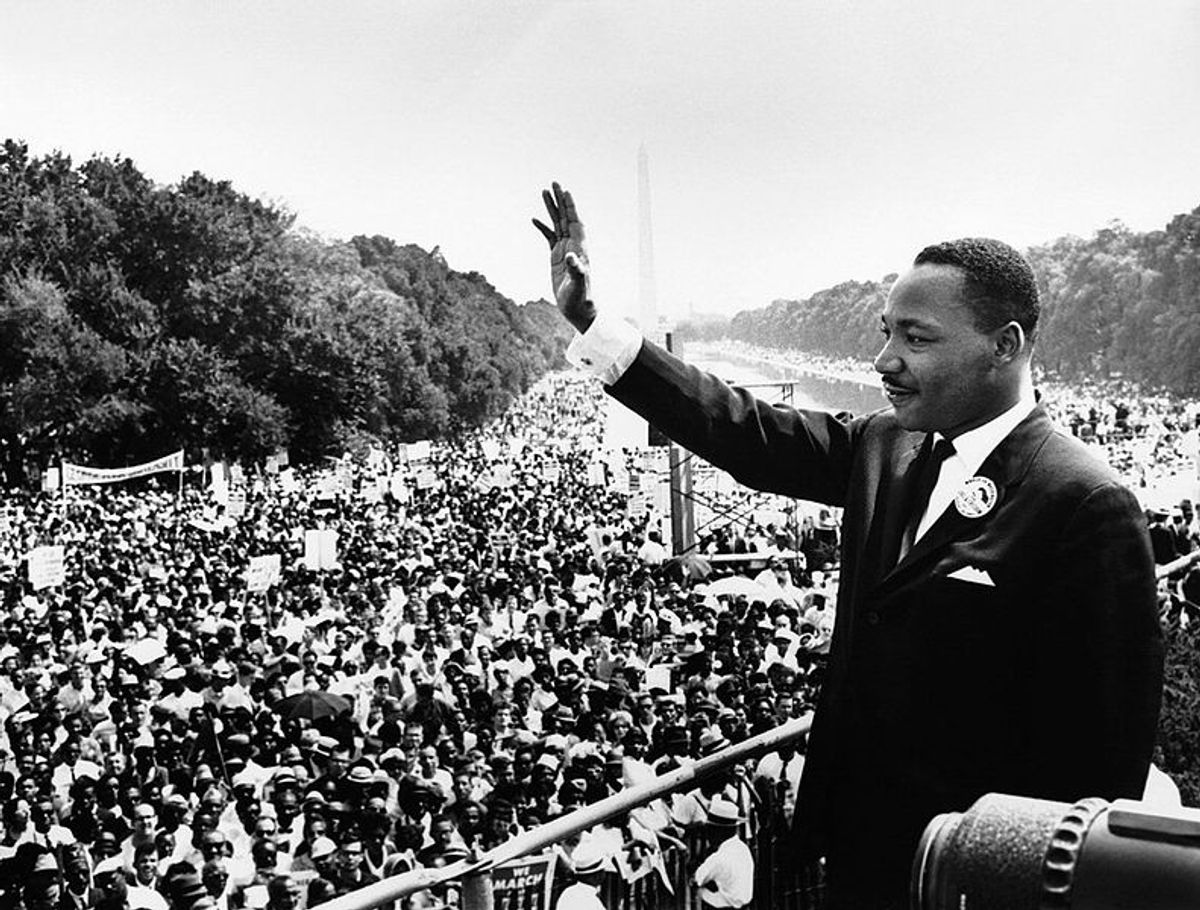 Martin Luther King Jr. addresses a crowd from the steps of the Lincoln Memorial where he delivered his famous speech during the Aug. 28, 1963, March on Washington, D.C. (Wikimedia Commons)
--

Chances are, you can’t name the person kneeling down next to Martin Luther King, Jr. in the iconic photo taken just after the civil rights leader was gunned down on April 4, 1968. That’s because nobody there knew who he was, not really. He was “Agent 500,” spying on Dr. King for the Memphis police department’s intelligence division and the FBI.

But no one knew that at the time. Nor did they know that James Harrison, also in King’s group, was an FBI agent proper, whose intelligence work joined with Agent 500 in the days before King’s assassination to give the Feds disturbingly detailed information on King’s every move, writes Taylor Branch in his exhaustive biography of the civil rights hero.

Nor did they know that on the day of the assassination Detective Ed Redditt kept “clear view over the motel parking lot to King’s room 306,” papering over a window and cutting out two holes for binoculars, writes Branch.

No one knew how the place was swarming with agents of the state.

And nor did they know of the massive COINTELPRO operation of J. Edgar Hoover’s FBI, whose surveillance, slander and intimidation of King is still a black eye for the federal government and the Justice Department. The now-infamous anonymous letter from the FBI urging King to commit suicide was probably only known to King himself at the time. No one knew how extensively the FBI was bugging King’s phones and rooms where he and his inner circle met, tracking and following King with the full power of more than 40 FBI field offices dedicated to COINTELPRO.

Much would come to light in the Senate’s 1975 Church Committee report, which officially revealed COINTELPRO:

“From December 1963 until his death in 1968, Martin Luther King, Jr. was the target of an intensive campaign by the Federal Bureau of Investigation to “neutralize” him as an effective civil rights leader. In the words of the man in charge of the FBI’s “war” against Dr. King:

‘No holds were barred. We have used [similar] techniques against Soviet agents. [The same methods were] brought home against any organization against which we were targeted. We did not differentiate. This is a rough, tough business.’”

As details of that “rough, tough business” began to leak out over decades following King’s death, harrowing questions began to be asked by widow Coretta Scott King, her family, and others: Why is a government agent present at Dr. King’s assassination? Why is it that this Agent 500 is kneeling next to the slain King--seemingly checking to see that he’s dead, say some--while the actual members of King’s group appear more concerned with pointing out where the gunshot originated? How far was Hoover willing to go to “neutralize” King and “prevent the rise of a black ‘messiah,’” as his memos directed the FBI to do?

Was there involvement of the federal government in the assassination?

It took a jury only an hour to bring a unanimous verdict on that question in a 1999 case brought by Coretta and the King family: Yes.

Evidence was vetted for nearly four weeks in a Memphis courtroom, with over 70 witnesses testifying. Jurors learned that Agent 500 was Marrell McCullough, a consummate government agent who joined the CIA after his undercover work in Memphis. The prosecution laid out a conspiracy in which the defendant Loyd Jowers was linked to a network of specially selected local police, federal agents, and mafia who perpetrated the assassination. James Earl Ray, the man fingered by the state, was in fact innocent, went the claim with which the jury confidently concurred.

“There is abundant evidence of a major high-level conspiracy in the assassination of my husband, Martin Luther King, Jr.,” said King’s widow after the trial. Even the Justice Department is forced to admit on its website that “the jury adopted a verdict offered by the parties finding that Jowers and ‘others, including government agencies’ participated in a conspiracy to assassinate Dr. King.”

Much of the case hinged on Detective Redditt, the black Memphis officer surveilling King’s room at the Lorraine from across the parking lot, who delivered testimony during the trial that removed him from suspicion and introduced a strange twist. Redditt, who spied on King’s balcony from behind a papered-over window in a fire station, received a call on the fire station’s payphone some hours before King’s death: “We’re going to kill you,” the voice on the other end said. But Redditt remained on duty, despite the unnerving call.

Then, just two hours before King would be killed, Redditt was pulled off his post by the head of the Memphis police department, former FBI agent Frank Holloman. Conspiracy theorists point out that Holloman was inspector in charge of J. Edgar Hoover’s Washington office for ten years before receiving the highest post in Memphis policing.

Before he knew it, Redditt, a lowly black detective, was at a table in a conference room at police headquarters faced by a number of higher-ranking men he didn’t know. Someone had flown in from Washington, a Secret Service agent no less, expressly to pull him off the job because, the unknown agent said, a contract had been put out on Redditt’s life. Redditt argued to no avail, and he was driven home by Lieutenant Arkin, another Intelligence Division bigwig largely unfamiliar to Redditt. It was on the ride home in Arkin’s cruiser that he heard on the radio the news of King’s assassination.

The prosecution contended that removing Redditt from his post cleared the way for the assassination to be accomplished without an officer not in the conspiracy being a witness and available to pursue the sniper. The other agents present, Agent 500 and Harrison, were aligned with Hoover and the FBI, who treated King as something like a domestic enemy of the state (Hoover: “We did not differentiate” between King and the Soviets).

Redditt was told many years later that it was a case of mistaken identity: The hit had been put out on someone in Knoxville, Tennessee, not Memphis. Someone else later said it was, rather, someone in St. Louis who’d been targeted.

But one’s inner Sarah Koenig pauses at this “solution,” and a cascade of questions spool out of Redditt’s testimony at the trial.

What about the call to the payphone at the fire station? If the hit had nothing to do with Redditt, why did evidence of a hit reach Redditt through a payphone just feet from where he overlooked the spot where King would be gunned down in just hours? So there were two hit jobs? One whose killer knew precisely where Redditt was, and one that clumsily confused cities in the South and Midwest?

Redditt was never engaged in any of the sort of nefarious activity that would have attracted contract killers. Black officers were employed by departments all over the South by 1968, so it’s difficult to imagine that Redditt’s race made him the target of two killers in one afternoon. Redditt was not an outspoken, fist-raised, Black Power agitator; he was simply a black cop like many others in Southern cities in the late 1960s.

Another question: How is the Secret Service so capable, almost omnisciently so, as to sniff out a hit job on a lowly police officer in middle America, only to confuse cities? How does one confuse Memphis and Knoxville?

Does the Secret Service always fly agents on emergency flights and convene police departments’ executives in the event of a contract? Redditt recalls that the conference room was “full.” And yet Redditt testified that he “never heard anything else about it” after he returned to work. It stands to reason that a scare of that magnitude would merit at the very least an explanation to assure one of his safety, an all-clear. The prosecution asks Redditt, “No one ever mentioned it to you again?” Redditt: “Not again until two years ago.” That would be 1997.

Again, confusion about the city is puzzling. Was it Knoxville or St. Louis where the actual targeted officer resided? If the threat was so terrifyingly immediate that Redditt was pulled suddenly from duty and whisked away to safety, how was that same mobilization able to occur again in Knoxville to avoid the imminent hit? Did the Secret Service agent hop in a plane and fly to Knoxville? That would take hours, start to finish; Knoxville is on the other side of Tennessee, nearly 400 miles away. Did an officer get murdered in Knoxville that day? Or in St. Louis? Was his name Redditt, a fairly uncommon surname?

How many black police officers were there named Ed Redditt in 1968? Was there one in Knoxville? St. Louis? Surely Redditt’s would-be killer would have known his race and his name. How else does a hitman find a victim? It seems strange that an experienced assassin would know the precise location of his potential victim and not know his name. It thus stands to reason that it was an Ed Redditt for whom the supposed killer was looking.

Even if most of these questions can be satisfactorily answered, the full weight of the circumstance’s strangeness is enough to unsettle a skeptic. But it’s not just your Alex Jones-listening truther; a twelve-person jury appears to have been overwhelmingly convinced. So was Coretta Scott King, who’s seen as a stately and even regal widower, not a raving conspiracy theorist.

Sadly, knowing what we know about the FBI and CIA during this period, the assassination of King would not be totally shocking. The FBI’s coordination of the assassination of 21-year-old Fred Hampton the next year is largely undisputed. An FBI informant in Hampton’s inner circle provided a detailed floor plan of Hampton’s apartment that the Chicago police department used to launch a military-grade raid, riddling the apartment and the sleeping Hampton with some 90 bullets from submachine guns, shotguns, rifles and pistols. The FBI was in the killing business in the late 1960s, when a citizen was deemed too dangerous. Hampton’s threat was his ability to organize a cross-racial alliance of poor people, precisely King’s project in April 1968. Hampton, a wildly charismatic leader, was enough of a threat to be eliminated. Had King too found himself in those same sights?