Judith Miller's pathetic Iraq apologia: A disgraced reporter rallies to her own defense

Miller's war reporting was disastrously wrong, and now she's trying desperately to spin it all away 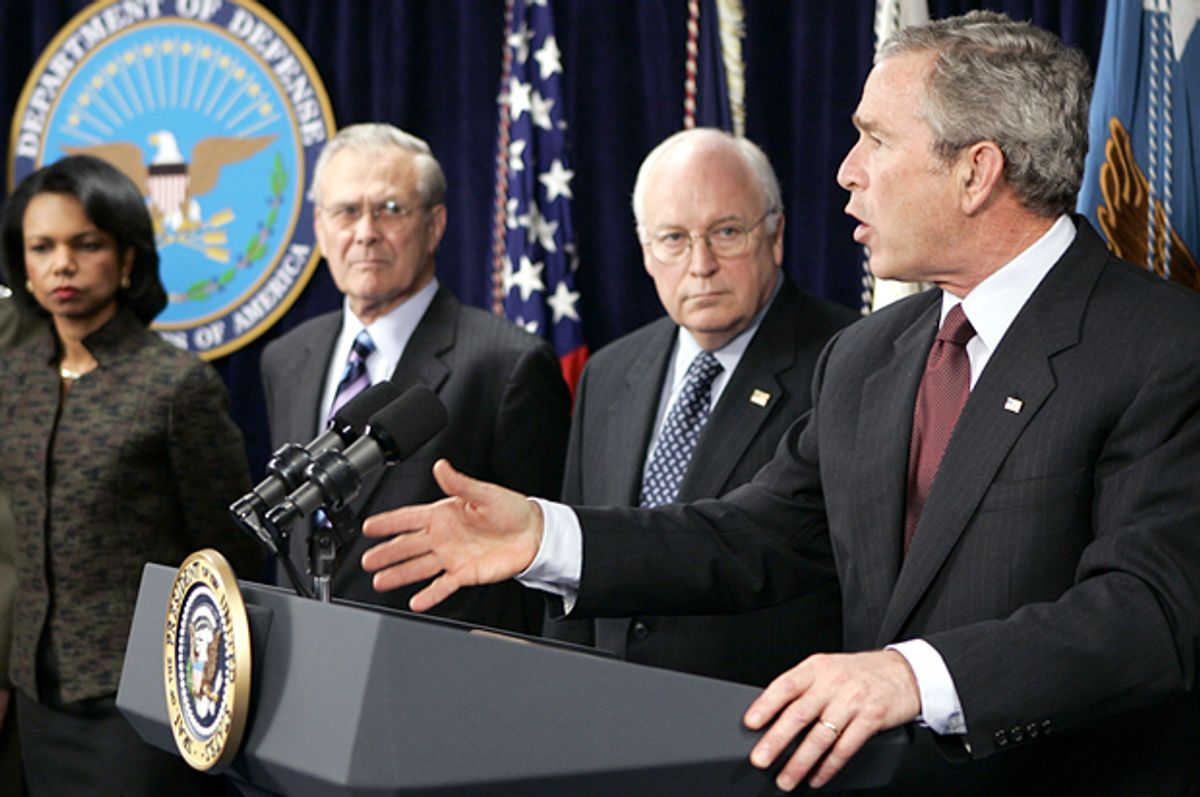 You can’t get one sentence into Judith Miller’s Wall Street Journal op-ed on the Iraq war before the bullshit starts. “I took America to war in Iraq,” she writes. “It was all me.” The mocking lede from the former New York Times reporter casts the criticism of her reporting in the lead-up to the Iraq war – which was wildly inaccurate and, relatedly, a centerpiece of the Bush administration’s public case for war – as hysterical and invalid. Having set up the piece with a bad-faith argument, Miller makes what is now a familiar case from die-hard proponents of the Iraq misadventure: the Bush White House did not “lie” to start the war, they just got everything wrong. And, of course, Miller argues that she, as a reporter covering this march to war, barely did anything wrong herself.

This is actually the second time in two months that the Wall Street Journal has carved out some op-ed space for someone arguing that George W. Bush and his administration didn’t “lie” about Iraq. Laurence Silberman, a conservative federal judge who chaired the post-invasion commission investigating the failure of the intelligence community, wrote in February that it’s “dangerous” to call the Bush administration “liars” when it comes to Iraq. They didn’t “lie,” he argued, they were merely incompetent, and calling them liars is just what Hitler would do.

As I wrote at the time: yes, the Bush team absolutely lied. They took disputed intelligence about Iraq’s weapons programs and presented it to the public as unquestioned truth, even after they were made aware that there were serious doubts about its credibility. Take, as an example, the aluminum tubes Saddam Hussein purchased that George Bush, Dick Cheney, Condoleezza Rice, and Colin Powell swore up and down were designed for uranium enrichment. They were wrong, and the intelligence analysts who were right about the tubes’ real purpose (making rockets) were ignored by the president and his people, who argued all the way through to the invasion that Saddam Hussein bought these tubes so he could make a nuclear weapon.

I bring up the example of the aluminum tubes because Judith Miller quite noticeably avoided it in her Journal op-ed. It was Miller’s reporting on those same tubes that the Bush administration waved around so enthusiastically as proof that Saddam was trying to go nuclear. Of her own reporting on Iraq, all Miller had to say was that “the newsworthy claims of some of my prewar WMD stories were wrong.” Having glided right past her own massive failures, Miller rallies to her own defense:

No senior official spoon-fed me a line about WMD. That would have been so much easier than uncovering classified information that officials can be jailed for disclosing. My sources were the same counterterrorism, arms-control and Middle East analysts on whom I had relied for my stories about Osama bin Laden and al Qaeda’s growing threat to America—a series published eight months before 9/11 for which the Times staff, including me, won a Pulitzer.

In 1996, those same sources helped me to write a book about the dangers of militant Islam long before suicide bombers made the topic fashionable. Their expertise informed articles and another book I co-wrote in 2003 with Times colleagues about the danger of biological terrorism, published right before the deadly anthrax letter attacks.

Just so we’re clear here, Miller’s defense of herself is that she wasn’t led by the nose to her wrong conclusions – she arrived there on her own steam. Congratulations! Saying she “relied on sources” is a neat little way of pushing responsibility for her own bad reporting onto others. One of the biggest criticisms of Miller from people who worked with her was that she was too reliant on her sources, whom she was overly chummy with and loathe to question. But whatever. She won a Pulitzer!

Let’s circle back to the aluminum tubes, because it offers an excellent example of this dynamic. If Miller wants to argue that she wasn’t “spoon-fed” the tubes story, fine. She was still wrong. Very wrong. And after her initial report was published, an expert in nuclear weapons and uranium enrichment who’d actually investigated Saddam’s aluminum tubes contacted Miller and let her know of the many people in the intelligence community who disagreed with the story the administration was pushing. Miller wrote a follow-up article that cast those doubts as a minority view that wasn’t even worth considering. She quoted a “senior administration official” mocking the dissent – which, again, was 100 percent correct – as “a footnote, not a split.”

The rest of Miller’s op-ed is a bizarre defense of the people who sent Americans to die in Iraq looking for weapons that didn’t exist. She trots out all the old favorites – Saddam would probably have tried to get WMD if we hadn’t invaded; we actually did find old and rotting chemical weapons so the war was kind-of justified, etc. It’s all part of a new book Miller has coming out about her life as a reporter which, if this op-ed is any indication, promises to be an epic whitewash.

The saddest part about all of this is that the people who lied us into Iraq don’t need Judith Miller to run to their defense. They’ve already dodged any and all consequences for initiating a bloody and disastrous war that claimed tens of thousands of lives. Op-eds in major newspapers cleansing them of the guilt they have no reason to feel are just nice little perks. Miller played her smaller part in the debacle and faced far more in the way of comeuppance than anyone who actually started the war. She no longer works for the New York Times, but she did manage to stay on staff for a long time after it was revealed that much of what she reported about Iraq’s WMDs was wrong. She’s still getting the Judith Miller brand out there on Fox News, where she comments on national security and media ethics as part of Roger Ailes’ career-long “fuck you” to the mainstream media.

That’s quite a drop from her former life as the star reporter in America’s most powerful newsroom. Her role now is to help inflate the safe little bubble that conservatives choose to inhabit in which the Iraq war was, at worst, just a good-faith “whoopsie!” on the Bush administration’s part that ended up being a great and victorious crusade until Obama came along and ruined it all. It’s a comforting fiction that lets Miller sneer at her critics for pointing out all the things she got wrong. She wasn’t part of a lie, she was just part of an epic screw-up that got lots of people killed.