Spanking on "Outlander": The outrage and the turn-on of the "bodice-ripper" tradition 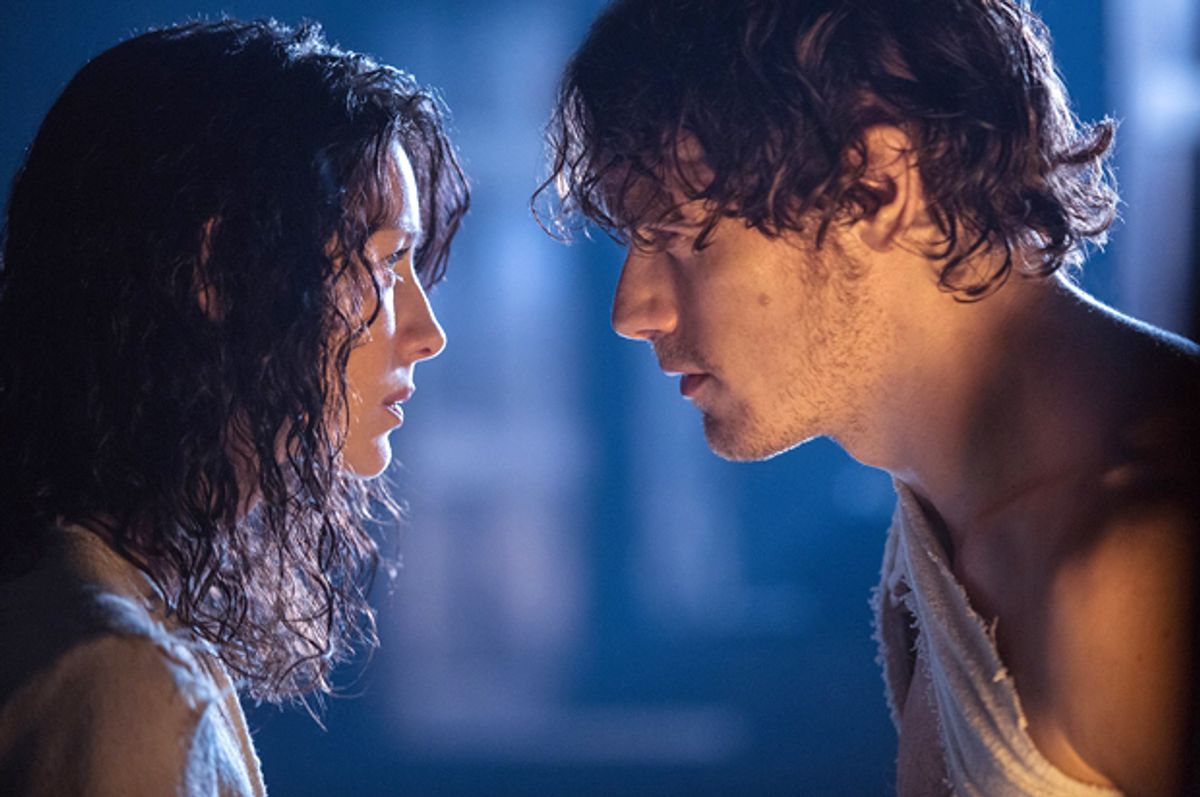 On Saturday, the Starz romance “Outlander” came back with a bang -- or a smack, really. Well, technically, several smacks and one nice long sweaty bang. Plenty happened in the mid-season premiere of this series, which revolves around the inadvertent time-travel of Claire, a nurse from 1945, back to 1743 Scotland, but there’s only one scene people will be talking about: the spanking. And for good reason: This much-anticipated moment brings to life a chapter in the insanely popular book that has, as Flavorwire put it, “polarized readers since the ‘90s.” It's a scene about which Diana Galbaldon, the author of the series, snidely predicted in a recent interview: "There will undoubtedly be a certain amount of knee-jerk feminism from very young women." She's at least right that this series of events, which differs drastically from the book, will provoke discomfort and even outrage. It will also inspire fan-created GIFs to which women the world over will feverishly masturbate. A great many watchers will be both outraged and turned-on.

The episode begins where the mid-season cliffhanger ended: As a result of disregarding her new husband Jamie's instructions for remaining out of harm's way, Claire ends up in the clutches of the show's villain, Capt. Jack Randall. So, Jamie and his men come to her rescue, risking their lives in the process. Once they're safe back home, Jamie feels it's time to resolve the issue. He takes off his belt and says, “You’ve done considerable damage disobeying my orders” -- he snaps the belt -- “and I’m going to punish you for it.” She pleads that she will "never do such a thing" again, but he tells her there's nothing like "a good hidin'" to get a lesson across. She tries to evade him, he follows and so begins the comedic ho-down music. “There’s such a thing as justice, Claire," he explains. "You’ve done wrong to all the men and you must suffer for it. I’m your husband, it’s my duty to attend to it.” She begins hurling various items at him -- and cut to the scene in the dining hall downstairs where the aforementioned affronted men jokingly speculate about who is punishing whom upstairs.

Indeed, Jamie manages only to yank up her dress and deliver a few blows with the belt before she hits him, kicks him in the face and eventually digs her nails into his cheek. Still, he's much stronger and overpowers her. She calls him a "sadist" and he replies, "I said I was gonna punish you" -- and then, raising his eyebrows -- "I didn’t say I wasn’t gonna enjoy it." The scene ends with the implication that the spanking will continue and, when we see her next, her bum is so sore she refuses to sit down. She also refuses to let Jamie sleep in the same bed with her. He's perplexed by her enduring anger about the spanking -- but eventually, he comes around. Once again in their boudoir, the scene of the crime, he explains the long tradition behind what he did. "Wives obey their husbands. Husbands discipline them when they don’t. That’s how it was with my father and his father, on and on and on back," he says. "But maybe for you and me it has to go a different way.” He pledges to never raise his hand to her again and there follows a mutually frenzied disrobing.

They end up on the floor -- in front of a roaring fire, naturally -- with Claire riding him. They're breathing heavy and grunting -- and then she suddenly grabs his knife and holds it to his chest, still grinding against him. "If you ever raise a hand to me again, James Fraser, I will cut your heart out and have it for breakfast, do you understand me?” He gives her his word and then he's taking control, thrusting and then rolling her over onto her back. "You're mine … you're mine … and I mean to make you call me master," he tells her. Afterward, as they lie there blissfully by the fire, he says, "I am your master … and you're mine. It seems I cannot possess your soul without losing my own."

Power play, much? I mean, it's no "Fifty Shades of Grey" -- but only in terms of there being no fuzzy handcuffs or safe words. Consider the scene at the end of the "Fifty Shades" movie in which Christian, angry about some super-serious work stuff, decides to take out his frustrations on Anastasia, who hasn't signed a submissive contract and is openly uncomfortable with his kinky desires. As I wrote in my review of the movie, "Christian Grey whales on a naked Anastasia Steele with a belt. Tears roll across the bridge of her nose. She has the rigid countenance of someone enduring unwanted torture. Afterward, angrily, she tells him, 'You will never do that to me again!' He, on the other hand, is flushed and sweaty and has the look of a guy who has just jizzed in his pants." It's uncannily similar, isn't it? In both cases, we have a hero who is damaged -- one by abuse in his past, the other by the culture in which he was raised -- and a heroine who seeks to rescue and reform him. Both leading ladies admonish their respective brutes for bad behavior -- a power play of their very own -- and after much pouting and turmoil, hot sex ensues. The chief differences in these two scenes are that Anastasia agrees to the spanking, albeit begrudgingly and resentfully, whereas Claire fights it every bit of the way; and Christian doles out the flogging as a way to relieve his own pent-up frustrations and get a sexual release, while Jamie delivers it as actual punishment that has the consequence of bringing him some admitted pleasure.

The patriarchy is such a force of titillation in romance novels. In an essay titled “Getting a Good Man to Love: Popular Romance Fiction and the Problem of Patriarchy,” Catherine Roach writes, “Romance novels help women readers deal with a paradoxical relationship toward men within a culture still marked by patriarchy and threats of violence.” The paradox, put simply, is that women are “in a position of simultaneously desiring and fearing men.” She explains, “Romance novels function as an antidote, as a way of pleasurably working through—in fantasy, in the safe and imaginative play world of fiction—the contradictory position of the heterosexual woman within patriarchal rape culture.” She writes, “These novels essentially represent a mythic fantasy world in which Woman: the Virgin, the Maiden, the Princess Warrior, Everywoman, tames and controls the monster, Man: the patriarchal alpha hero, who has the power to easily harm her, but who will not, because she has cracked open his frozen patriarch’s heart and taught him to love.” In Claire’s case, she has gotten him to see the errors of his time -- or, in the very least, to make exceptions with her. As he tells her after she freezes him out post-spanking, "Maybe for you and me it has to go a different way.”

The television spanking is sure to disturb some viewers, but it's far more mild than in the novel, which shows Jamie more severely chastising Claire and even violently shaking her in scenes before the punishment itself. The spanking is also depicted in the book as being much more brutal. But most remarkable of all, this scene of corporal punishment is eventually followed not by a clearly mutual fireside escapade but rather sex that is rough-turned-rape-turned-ecstatic. At one point she yells, "No!" and, "Stop, please, you're hurting me!" But he continues and she narrates,"I could feel the jolt of each stroke deep in my belly, and cringed from it, even as my hips rose traitorously to welcome it." (Here we see the conflict between what the body and brain want.) Before long she is screaming, "Oh God, Jamie, yes!" Again, it's that forced seduction fantasy. As I've written countless times before, rape fantasies -- which, it cannot be said enough, are purely fantasies and do not mean that women actually want to be raped -- are extremely common: four in 10 women report having them. There are lots of theories about why so many women are into these scenarios, but a popular one is that our culture projects such shame on female sexuality that rape fantasies allow women an out, a way to be sexual without being at fault. Another more simple explanation is that it's titillating for women to imagine being so passionately desired that a man cannot control himself around her.

The television version of the spanking took what originally read as spousal abuse followed by rape and much more palatably turned it into a somewhat farcical clash between two people of very different eras that was resolved through the timeless language of bonin’. What both versions of the spanking perfectly encapsulate is the paradoxical frisson of romance novels and the media franchises they inspire. These kinds of erotic stories, especially the historical and science-fiction variety, do very heavy-lifting to satisfy women's conflicting desires -- whether it's with stories of an egalitarian-minded heroine forced into marriage or by presenting a potentially kinky act in a historical setting -- and allow them to process the psychosexual baggage that comes along with so many years of, yes, the patriarchy. We may not be in 18th century Scotland, but women are still working through what amounts to a culturally non-consensual submissive relationship with men. You needn't look any further than their fantasies for proof.