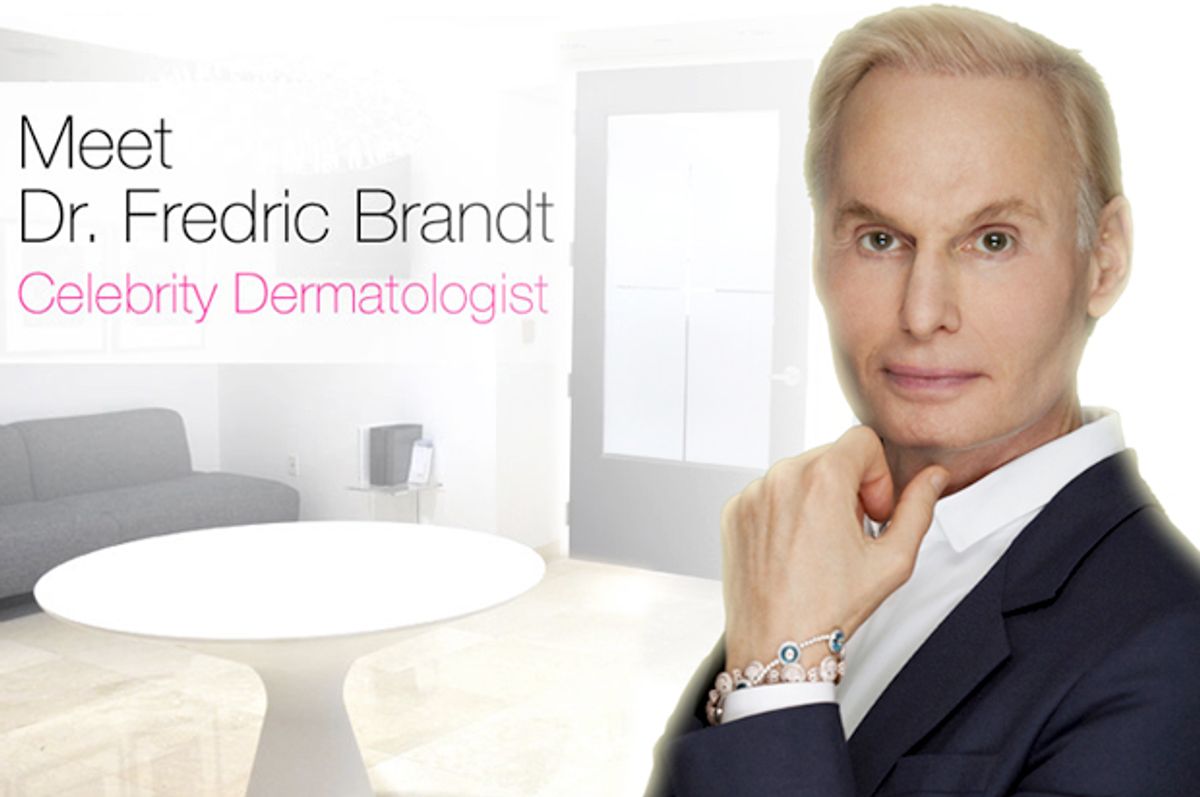 Nobody dies because of sitcom. But when the news first broke Sunday that celebrity cosmetic dermatologist Dr. Fredric Brandt had died suddenly in Miami, the early reports couldn't help noting that Brandt had reportedly been recently stung by the uncanny – and unflattering -- resemblance the skin doctor to the stars bore to Martin Short's inhumanly waxen Dr. Franff on "Unbreakable Kimmy Schmidt." And now that local police have confirmed that Brandt's death was a suicide by hanging, the enigma of the man, and what fueled his final act, only grows more unsettling.

Though Brandt's dermatology practice – and his striking face -- were long familiar to his well-heeled clientele, it was his name that was far more recognizable to more of us. His Dr. Brandt skincare line has long been a favorite of higher end shoppers – and legions of thrifty Sephora sample hoarders. For a long time, it was as relatively easy not to associate Brandt with his brand as it once was to not know what Mike Jeffries, the now 70 year-old man behind Abercrombie & Fitch, looked like. But all that changed just one month ago, with the success of "Kimmy Schmidt." In an early episode, Kimmy (Ellie Kemper), eager to leave her traumatic past as a kidnapping victim behind, visits her wealthy employer's hideous "board certified D, DS, DDSOBGYN" Dr. Franff, a man with straight, flaxen hair and a face is so full of fillers he can barely speak. The tabloids immediately noticed a similarity between Short's character and the "Baron of Botox," though representatives for the show wouldn't comment.

Only a year ago, Brandt seemed on top of the world. Back then, he was the subject of a New York Times profile that dubbed him "the designated magician responsible for keeping faces both well known and otherwise in states of extraordinary preservation" – faces like Stephanie Seymour and Madonna, who said, "If I have nice skin, I owe a lot to him." Writer Guy Trebay rather tactfully described Brandt's own visage as "a mask of serene immobility, a face with a creaseless brow, a square firm jawline, lips feminine in their puffy fullness. His skin is impressively smooth and so pale as to lend him a lunar aspect." It's a description that seems to have been tailor made to be applied to Kimmy Schmidt's Dr. Franff.

Initial reports of the 65 year-old's death left out the cause. His publicist Jacquie Trachtenberg told the New York Post Sunday, "He passed away this morning. He was suffering from an illness. Everyone who knows him is devastated. I worked with him for over 20 years and he was an amazing man, not only was he a brilliant doctor, but he was the kindest human being." But on Monday she elaborated, saying, "The show definitely deeply hurt him, he was being made fun of because of the way he looks. It is mean, and it was bullying. But the show was not the reason for his depression, and it was not the reason he would take his own life."

In the past few weeks, I've had to spend more time on Manhattan's Upper East Side than anyone not museum-hopping should endure, and also took a stroll down Palm Beach's Worth Avenue, which is basically the Easter Parade of plastic surgery. And if you think seeing unusually smooth, plumped faces on television is odd, it's nothing to the experience of seeing them in real life. It's like a bunch of Lady Cassandras on legs. Yet Brandt moved in a world like that, a world of what the Times called Dr. Brandt "creations" – individuals whose "skin is smooth and yet not freakishly taut, whose cheeks possess the firm curvature of a wheel of Edam, whose unblemished flesh calls to mind a Jumeau bisque doll." Imagine for a moment what it's like inside that rarefied circle, a place in which you can command "as many as 30 [patients] daily, some paying as much as $7,000 for a full treatment." Now imagine that world suddenly becomes a joke, one that is very much presumed to be about you.

But the punch line of the Martin Short character on "Kimmy Schmidt" wasn't simply "the way he looks." It was not a cruel jab at a person with a birth defect, or a deforming injury. The joke was about a character who had very obviously and unfortunately altered his looks. It was about a character who had gone so deeply into a world of men and women obsessed with youth and beauty that he had made himself grotesque. And hurtful as it apparently was, it nonetheless appears to have been a parody based on a public figure. That's not bullying.

The mental health issues that drive individuals to self-harm are as real and devastating as any other disease. The consequences, as those of us who've lost people we love to them can attest, are just as real as they are for any other disease. And the tragedy of Dr. Brandt seems ultimately similar to the one of so many other victims of suicide – that you can just never be sure what pain is hiding behind a person's face. "You know," he told the Times last year, "a lot of my patients say, 'I wish I could look like you.'"