Business of backlash: GOP cashes in on Koch/Adelson anti-BDS donations

As the BDS movement grows, the flow of money to stop it increases -- and Republicans spot a "winning issue" 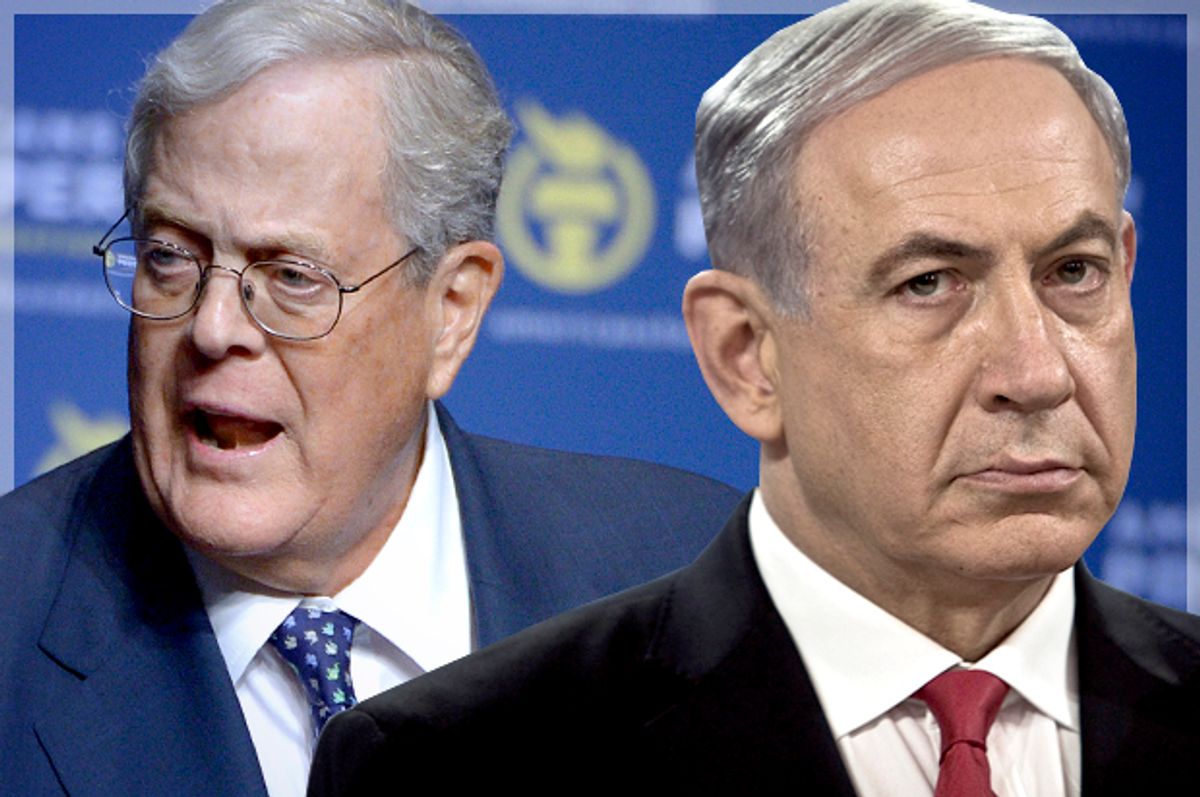 Across the globe, with increasing force and energy, the Boycott, Divestment, and Sanctions (BDS) movement is gathering momentum and racking up victories.  This was already occurring after the Israeli onslaught on Gaza last summer drew global attention to Israel’s illegal occupation of Arab lands; it has become even more noticeable after Prime Minister Netanyahu’s declaration that there would be no Palestinian state under his regime. That statement, along with his alarmist (and racist) outcry regarding “droves” of Arab Israelis heading to the polls to exercise their democratic rights, have both hardened the resolve of those who wish to end the occupation and grant Palestinians and others equal rights in Israel-Palestine, and also made the liberal Zionist position increasingly untenable.

With the success of BDS has come a strong reaction.  In a 2014 speech before AIPAC Netanyahu himself criticized BDS no fewer than 18 times:  “Attempts to boycott, divest and sanction Israel, the most threatened democracy on Earth, are simply the latest chapter in the long and dark history of anti-Semitism.  Those who wear the BDS label should be treated exactly as we treat any anti-Semite or bigot. They should be exposed and condemned.”

It is exactly this well-worn and illegitimate equation of criticism of Israel with anti-Semitism that gives cover for a large backlash movement in the United States.  However, what should be noted about this backlash is not its tired rhetoric; it is its financial strength.  And the sources for anti-BDS attacks in the academy and at the grass-roots level are the same sources that are buying U.S. politicians.  We need to understand the ways this attack on the political and academic worlds work together.

A recent New York Times article titled “GOP’s Israel Support Deepens as Political Contributions Shift” notes that Tom Cotton and other Republicans “benefited from millions in campaign spending in 2014 by several pro-Israel Republican billionaires and other influential American donors who helped them topple Democratic opponents …. The alliances in Congress that pro-Israel donors have built will certainly be tested as they lobby lawmakers to oppose the deal with Iran and perhaps even expand sanctions against the country, despite objections from the Obama administration. Donors say the trend toward Republicans among wealthy, hawkish contributors is at least partly responsible for inspiring stronger support for Israel among party lawmakers who already had pro-Israel views.”

Giving Netanyahu the floor of the U.S. Congress to criticize a standing president, writing letters to Iranian statesmen doing the same, and now partnering with Israel to further what Netanyahu sees as its interests and placing those interests before those of the United States indicates a radical appropriation of the political process.

Now one could conceivably see these actions as emanating from sincere belief, but, given the huge dollars flowing into the coffers of those who toe the Netanyahu line, one can more logically see these actions as motivated by things other than love of Israel.  Indeed, that same New York Times article quotes Geoffrey Kabaservice, a Republican Party historian: “’Israel did not traditionally represent that kind of emotional focus for any element of the Republican Party,’ he said. ‘But the feeling now is that it is a winning issue, as it helps them to appear strong on foreign policy.’”  That, and collect bundles of cash.

Critically, this kind of intrusion into the U.S. political process is echoed by very similar kinds of actions in the academy.  This is well worth looking at carefully, for it is precisely in the academy that critical knowledge and oppositional points of view are supposed not only to be protected, but they should thrive there.  Now it has been disclosed that these same wealthy donors and others are working to suppress perfectly legal criticism of Israel, which they characterize as “delegitimizing” Israel.

A recent report, “The Business of Backlash: The Attack on the Palestinian Movement and other Movements for Social Justice,” issued by the International Jewish Anti-Zionist Network, synthesizes thousands of pages of tax returns and demonstrates that a small handful of individuals is responsible for a huge portion of the funding behind a backlash aimed against all those who are openly critical of Israel, and especially against BDS. The Koch brothers and Sheldon Adelson (and other top donors such as the Schusterman Family Foundation, the Lynde and Harry Bradley Foundation, the Becker Foundations, the Seth Klarman Family Foundation, the Russell Berrie Foundation, the Moskowitz Foundation and the Fairbrook Foundation) are not only donating huge sums of money toward squelching academic freedom and freedom of speech, they are hiding their involvement by filtering their donations through seemingly innocuous organizations.

The report finds that this network has invested

[O]ver $300 million in propaganda, surveillance, and lawfare directly aimed at silencing dissent and solidarity with Palestine... These individual donors and their foundations mask their involvement in funding Zionist backlash and Islamophobia through providing grants to donor-advised funds, community foundations and other intermediaries.

Daniel Pipes’ Middle East Forum receives funding from eight of the eleven major donors involved in backlash … In turn, MEF funds over a dozen other backlash and Islamophobia outlets, and provided the seed funding for Scholars for Peace in the Middle East (SPME).  SPME gave seed money for the AMCHA Initiative, the pro-Israel watchdog based out of California, whose co-founders Tammi Rossman-Benjamin and Leila Beckwith have both served on the Board of SPME. MEF publishes the Middle East Quarterly and sponsors Campus Watch, Islamist Watch, the Legal Project, and the Washington Project.

As Emma Rubin of IJAN notes, “Even foundations which purport to represent the whole Jewish community are deeply implicated in practices many Jews find reprehensible. Why is the Jewish Community Foundation of San Francisco giving $100,000 to the extremist AMCHA initiative which is undermining academic freedom by suing universities for discrimination on the grounds that professors who teach about Palestine are somehow anti-Semitic?”

If the Steven Salaita case taught us anything, it is that wealthy donors have no problem intruding into institutions supposedly devoted to free inquiry.  With universities beholden to well-funded outside influence, it is a matter of grave concern that one of the most critical international issues before us — Israel-Palestine -- cannot be discussed, debated, taught and researched freely.

Nevertheless, despite the financial and political power of this backlash, there has arisen a well-organized and successful set of responses. The report notes:

The Center for Constitutional Rights, Palestine Solidarity Legal Support, the National Lawyers Guild, and the Asian Law Caucus have all been involved in the legal defense of Palestinian and solidarity organizers targeted by lawfare. Students for Justice in Palestine and USACBI are increasing national coordination to defend students and professors against backlash on campus. There are growing networks against backlash, including a West Coast and national network organized by IJAN, that focus on cross-movement building toward responding to backlash through tactics of strategic defense that strengthen the Palestine Solidarity Movement and build collaboration across movements.

And the results have been promising:

Legal and organizing work forced rejection of the Title VI complaints against Rutgers and several U.C. Campuses, inviting a ruling that recognizes organizing in support of Palestine politically protected activity.  A mass mobilization of 350 academics and public intellectuals as well as 500 Jewish activists, intellectuals and community members defeated attempts to defund the Arab and Muslim Ethnicities and Diasporas program in the Department of Ethnic Studies at San Francisco State University.

The Koch brothers and their ilk certainly have the money, but moral outrage over such behind-the-scenes rigging of these attacks, and the ethical rightness of the Palestinian struggle, give tremendous strength and energy to BDS.  One increasingly gets the sense that it is those who are forming links of solidarity with the Palestinians, defying the bogus charges of  anti-Semitism, who are on the right side of history. With the Republican majority willing to sell what passes for their soul, the work of grass-roots popular movements in the academy and elsewhere is essential.

UPDATE: IJAN has corrected its report, referenced above: Although Daniel Pipes sat on the board of SPME when it was founded and has taken credit for funding the projects of several other board members of SPME, including the Brandeis Center and NGO Monitor, at this time, we do not have information to substantiate that SPME provided seed funding for Daniel Pipes. We apologize for this error.