Chuck Schumer's Iran betrayal: Why his latest shenanigans could give Obama a major headache

Partnering with GOPer Bob Corker, the Democratic leader-in-waiting could deal a significant blow to diplomacy 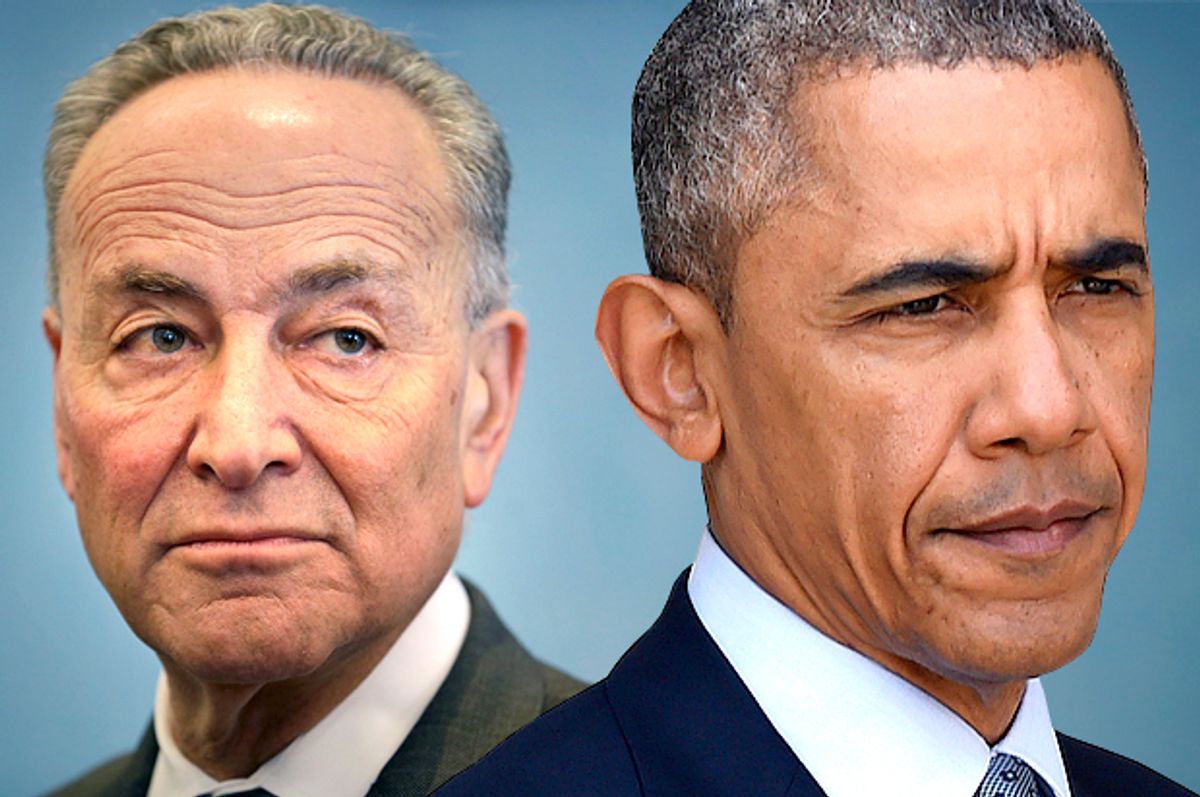 In his weekend interview with New York Times columnist Thomas Friedman, President Obama appeared to give some ground on the question of congressional review over an Iran deal. He told Friedman that "my hope is that we can find something that allows Congress to express itself but does not encroach on traditional presidential prerogatives — and ensures that, if in fact we get a good deal, that we can go ahead and implement it."

Pundits and lawmakers on Capitol Hill were quick to interpret this as a sign that the administration is willing to deal on the congressional review bill sponsored by Sens. Bob Corker (R-TN) and Bob Menendez (D-NJ), set for mark-up next week. That would represent a shift from the White House's longstanding posture on the bill, which has been to label it reckless and dangerous and veto-worthy and to call every Democratic lawmaker on Capitol Hill begging them to stand down.

White House Press Secretary Josh Earnest tried to shoot down the idea that Obama was suggesting he could be open to a negotiated version of the bill. "And I think the President was, in an aspirational way, suggesting that we’re going to engage with Congress, particularly those members of Congress that have done so on a principled basis, and we’re open to conversations with them," he said. "But on our two principles here about protecting the presidential prerogative and preventing the implementation of the agreement, we are going to stand firm."

What the White House is saying is that it's open to Congress passing what's essentially a non-binding resolution non-bindingly saying that Congress can non-bindingly review the agreement. This would allow Congress to have a pretend-say in an area where, if it had an actual say, it would probably screw it up, because Congress. Given the way some members in Congress have behaved in recent months, our first branch of government more than deserves to be condescended to in this Awww, we'll figure out a wittle pwotest vote for you guys manner.

But there are reasons beyond institutional pride for the White House to worry that Congress will move Corker-Menendez. Two reasons, mainly: Bob Corker and Chuck Schumer. These are formidable adversaries to have on the Hill, and after yesterday, it's clear that they're adversaries on this issue.

As we wrote recently, Corker, the chairman of the Senate Foreign Relations Committee, differs from some of his more famous conference colleagues in that he's not a tactical moron. He didn't sign Tom Cotton's Iran letter because he recognized that it would be unhelpful to the task of building a veto-proof majority to buck the president on Iran. He does not run around the cable news circuit calling the President a Kenyan tyrant-usurper. This makes him dangerous to the administration's goals and not as easily dismissible as a Ted Cruz or Rand Paul or Tom Cotton.

You can tell that the White House is taking Corker seriously because Obama and Earnest have been busy flattering him the past couple of days. In the Friedman interview, Obama described Corker as "somebody who is sincerely concerned about this issue and is a good and decent man." In yesterday's press conference, Earnest added that "Chairman Corker is somebody who is, I think, engaged in this process in a pretty principled way. And I think he deserves some credit for that. There are not a lot of other members in his conference who have done that, but he has."

The sweet talk isn't working. In a very flattering New York Times profile of Corker, here's his response to the White House's floated compromise: "No, no, no... Having a nonbinding vote is, in essence, not of substance." He's not wrong, and there doesn't appear to be any willingness on his part to soften the bill.

Corker will have a partner in Chuck Schumer. The Senate Democratic leader-to-be has always been to the right of the White House on Iran negotiations, albeit not as ostentatiously as Menendez. And whatever good feelings the administration had after Sunday, when the likes of Sen. Dianne Feinstein said that she would not vote for Corker-Menendez in its current iteration, were wiped out yesterday when Schumer said that he would.

“This is a very serious issue that deserves careful consideration, and I expect to have a classified briefing in the near future. I strongly believe Congress should have the right to disapprove any agreement and I support the Corker bill which would allow that to occur,” Schumer said in an emailed statement to POLITICO.

"Now that the outlines of an agreement are known," Politico writes, "Schumer’s emphatic statement that Congress has an important role becomes more significant, signaling to fellow Democrats that it’s safe to jump on board the review bill." Since a lot of Democrats were on board already, it's more like signaling to them that they can stay on.

The White House's best hope right now is that Tom Cotton sends another humiliating letter to "the leaders of Iran" that soaks up all the attention again. Perhaps a crayon doodle of a red, white and blue, nuke dropping on the Ayatollah's head. Just brainstorming.