For the first time in decades, dangerous myths about "insolvency" are fading away. Here's how it happened 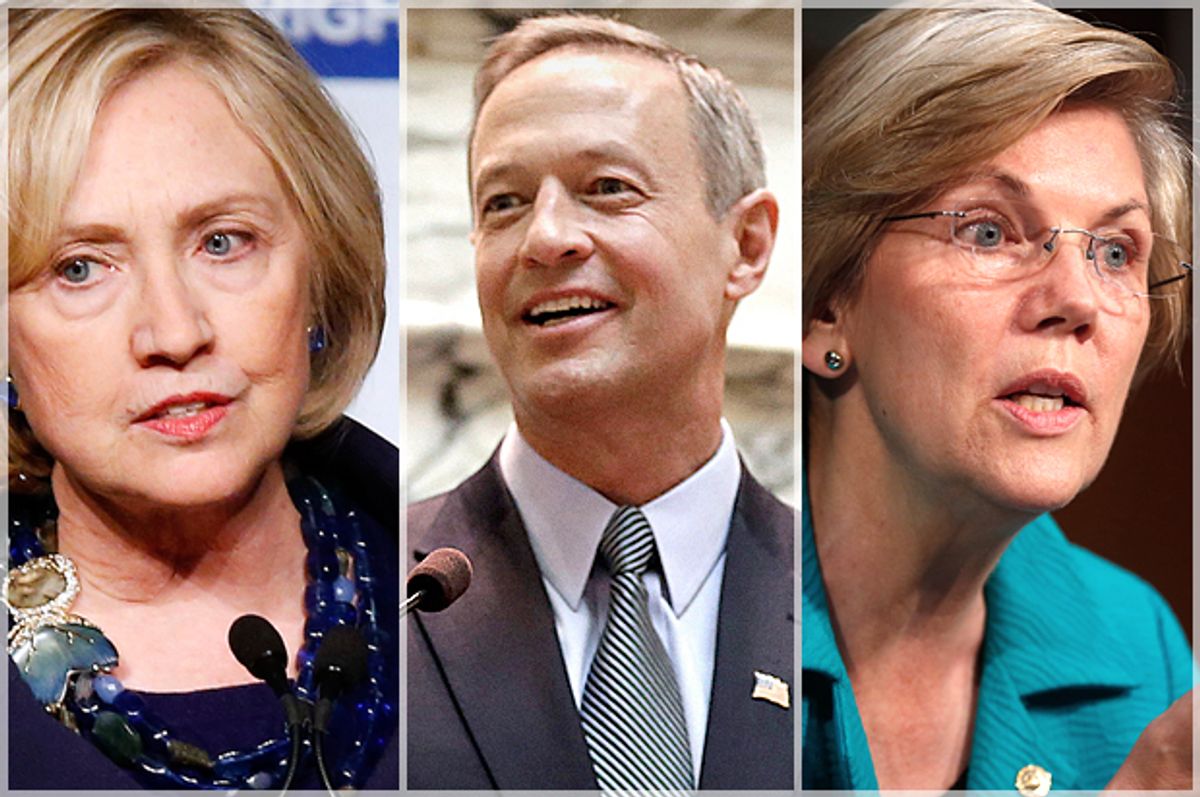 From the time Social Security was first proposed, the right wing has opposed it. It has always been, in their minds, a collectivist plot to put American on the path to socialism, and eventually a Communist government dedicated to sending God-fearing, liberty-loving Real Americans to the gulag. (Well, in America we now call those FEMA camps, but you get the idea.) Of course, they did agree to collect their benefits -- even the very rich ones -- because otherwise it wouldn't be fair at all, but they never stopped their proselytizing against it. In fact, opposition to Social Security became an organizing principle of the modern conservative movement, knowing as they did that this highly successful program flew in the face of their fundamentalist faith in the inevitable failure of government.

But they had to change their tune once it became obvious that the program had lifted massive numbers of elderly out of dire poverty and made middle class retirement more secure. They began the long road to convince everyone that the program was on the verge of insolvency. Recall the Great Communicator insisting that young people were getting a very bad deal:

A young man, 21 years of age, working at an average salary -- his Social Security contribution would, in the open market, buy him an insurance policy that would guarantee 220 dollars a month at age 65. The government promises 127. He could live it up until he's 31 and then take out a policy that would pay more than Social Security. Now are we so lacking in business sense that we can't put this program on a sound basis, so that people who do require those payments will find they can get them when they're due -- that the cupboard isn't bare?

That was Reagan's famous "Time for Choosing" speech in 1964. That "young man" to whom he referred is now 72 years old -- and judging by the polls, he's probably thankful for the guaranteed income that Social Security provides. More than that, he's undoubtedly relieved that his 21-year-old self wasn't in charge of his retirement planning. That young fellow surely had other priorities -- like putting food on the table and getting an education (not to mention more frivolous pursuits). Making the individual responsible for such choices was how it was done before Social Security, and it didn't work out too well for a vast number of people. Neither was there any safety net for that 21 year old if he happened to become disabled. Those were the good old days for which conservatives have always waxed nostalgic -- the days when sick people sold pencils on street corners and the elderly lived in grinding poverty and died before their time.

(But then, the conservative mantra was "better dead than Red," so perhaps that was considered a feature not a bug.)

The right never gave up, even in the face of massive support for the program. They did however adjust their strategy by claiming, more in sorrow than in anger, that the program was "going broke" and the only way to save it was to cut benefits. Ronald Reagan's very indiscreet budget chief David Stockman let the cat out of the bag when he said that the so-called Social Security crisis "will permit the politicians to make it look like they're doing something for the beneficiary population when they are doing something to it which they normally wouldn't have the courage to undertake."

The demographic challenge of the vast Baby Boom entering the program was real. But the alleged "crisis," which was very handily averted at the time by raising the retirement age and raising payroll taxes on ordinary workers, was only a temporary one. Nonetheless, both Democrats and Republicans signed on and it unfortunately ushered in the new era of bipartisan fear-mongering over Social Security solvency. In the 1990s the sexy new mantra was "privatization" or "individual accounts." During those go-go years, that old speech by Reagan had new salience, as plenty of regular folks thought they saw Warren Buffet when they looked in the mirror in the morning and "day-trading" became a second career for anyone with a computer. Some grumpy old-timers recalled that back in the 1920s, millions of clerks and waitresses were seduced into get-rich-quick real estate and stock market schemes and lost everything in the crash, but nobody wanted to hear that. Wall Street saw a profit center and the Republicans saw a way to finally detach the popular program from the government, thereby detaching the people from their government as well.

Unfortunately, too many Democrats in their zeal to appear "modern" -- and please Wall Street -- bought into the hype as well. President Bill Clinton even signed on to a version of the idea before the plan was derailed by impeachment. (Thanks, Republicans!)

Once the market had cooled at the turn of the millennium, the new-found ardor for privatization cooled among at least some of the elites in the Democratic Party. That, of course, did not stop George W. Bush and company for taking another stab at it. It was not successful, to say the least. Evidently, when people looked in the mirror in the mid-2000s they saw a hard-working stiff who was trying to make ends meet rather than a swashbuckling financial wizard. But throughout this time, the underlying argument remained the same, as it had since Ronald Reagan's time: They need to destroy Social Security in order to save it.

Sadly, even the Obama administration went along with this sophistry as part of its Grand Bargain, believing that putting Social Security benefits cuts on the table was an offer the Republicans couldn't refuse, and they would then inevitably agree to the president's demand for higher taxes. The Simpson-Bowles commission, reflecting the consensus among the center and center-right even went so far as to include a plan to cut Social Security benefits in their deficit-reduction program -- even though Social Security contributes literally nothing to the federal deficit. Mainstream members of the GOP were eager to take advantage of the opening, but the newer, more pure conservatives on the right refused anything that smacked of compromise. (Thanks Tea Party!)

Throughout all this, the Democratic Left has been adamantly opposed to cutting Social Security. Indeed, many thought that seeking to cut the Democratic party's signature program may have been the dumbest political move in the party's history. But as this latest attack unfolded, members of the activist base of the party started floating a different idea based on the reality of the lives people were actually living. It finally hit the national consciousness when blogger Duncan "Atrios" Black started using his column in USA Today to lobby for a change in strategy. As my Salon colleague David Dayen put it:

[I]n late 2012 [Black] embarked on a sustained crusade, on his blog and in a series of columns for USA Today, to inject a single idea into America’s policy discourse: “We need an across-the-board increase in Social Security retirement benefits of 20 percent or more,” he declared in the opening of a column for USA Today. “We need it to happen right now.”...

[A]round the edges of Capitol Hill the ground started to shift. In April, the New America Foundation, a prominent D.C. think tank, released a report that called for an annual increase of more than $11,000 in benefits for individuals on Social Security. The report went further than Black in suggesting different ways to structure the new benefit and how to pay for it. The proposal received widespread coverage, and represented a breakthrough for getting Social Security expansion into circulation among Washington policy mandarins (though even positive reports from left-leaning policy writers felt compelled to explain that it would never happen politically).

As spring and summer went by, other writers began to endorse the idea of expanding Social Security—not just scribes for liberal publications like The Nation and The American Prospect, but also the conservative writer Josh Barro of Bloomberg (now at Business Insider) and Edward Siedle, who covers retirement finance for Forbes. This fall, even the conservative journal National Affairs featured an essay that, in passing, advocates for expanding Social Security on grounds of its simplicity

That is a shocking departure from the way progressives have been strategizing for the past 30 years. Instead of being in a defensive crouch they took the offensive and tried to set a new agenda. And it worked. On Monday, the Wall Street Journal reported:

For years, liberal Democrats have fought against proposals to cut Social Security benefits. Now, they’re pushing the party not just to defend benefits but to increase them, and that could present a problem for Hillary Clinton.

The call for higher benefits is a marked difference from recent years in which the White House and Republicans were negotiating deficit-cutting deals, leaving liberals to argue merely for staving off benefit cutbacks. Separately, many experts in both parties have long argued that extending the solvency of the program would require a combination of benefit cuts and tax increases.

New legislation to increase benefits and raise the cap on payroll taxes (to include higher earnings) now has 58 co-sponsors in the House. The Senate voted on a similar measure and had 42 votes. This is a huge change from the reflexive handwringing over deficits and solvency that characterized the last three decades.

The Wall Street Journal contends that this is a problem for Hillary Clinton because she, like President Obama, has endorsed benefits cuts in the past. The article notes that her presumed rival former Maryland Governor Martin O'Malley is a proponent of expansion in contrast to her more conservative position. But the truth is that nobody knows what Clinton thinks about this at the moment. The last time she ran, cutting benefits was as mainstream as it gets. Indeed, O'Malley himself signed on to something called "A New Agenda for the New Decade" back in 2000 which was filled with all the solvency hysterics and called for "reform" of Social Security. He thought it was a terrific idea to have low income people be able to "invest" in Retirement Savings Accounts so they could save for their own retirement. (Because they have so much extra money ...) In his defense, that was the most liberal position at the time.

So, we have come a long way. The former Social Security reformer O'Malley has had a huge change of heart and is now agitating for expansion. The U.S. Congress now features a large faction of progressives and centrists in both houses backing the same. Despite the Wall Street Journal's assumption that such a change is a "problem" for Hillary Clinton, the way this wind is blowing suggests that she will have no problem at all if, like O'Malley, she has evolved to support it. She will likely have a big problem if she hasn't.

And it's fair to assume that the Republicans do not like this one bit.  The Democrats have marched right into the belly of the beast with a peace offering.  After all, the people who stand to benefit the most from this are the most hardcore members of the Republican base. Will they turn down a raise?