He was unarmed. He was shot in the back. He was a person. These facts should all matter — but they won't 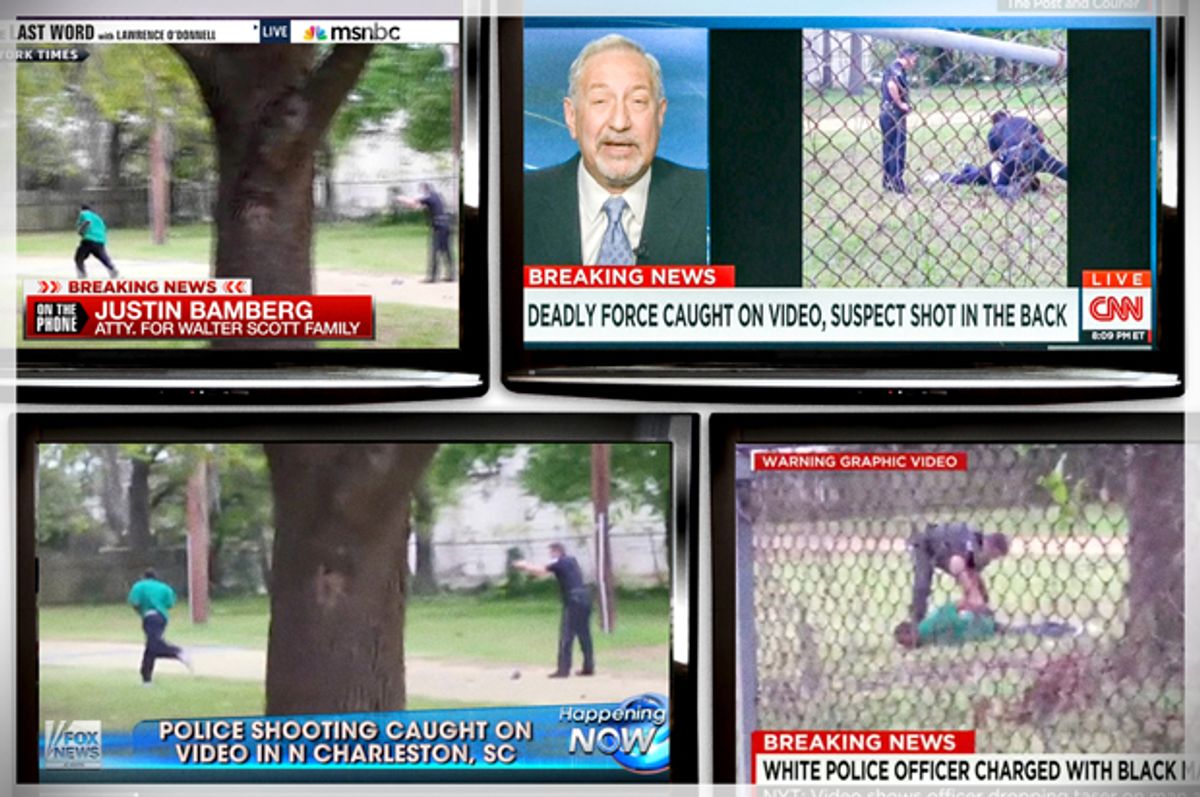 The most recent coldblooded police slaughter of an unarmed Black man is not the story of “one bad apple.” I refuse to narrate this story as another “isolated incident.”

On Saturday morning, Michael Thomas Slager, a police officer in North Charleston, South Carolina, shot and killed Walter Scott, after pulling Scott over for a broken tail light. Slager initially claimed that he used his taser on Scott after Scott ran during the traffic stop.  He then claimed that Scott tried to take his taser. Therefore, Slager was forced to use his gun.

But video shot by an anonymous bystander shows a very different, chilling version of events: As the video begins, the two men’s hands are interlocked. It’s unclear what is happening. But a second or so later, Scott breaks free and runs at a fairly slow pace away from the officer. Slager calmly pulls out his gun, aims and fires eight times at Scott’s retreating back. He then walks over to Scott’s now prone and bullet-ridden body, and handcuffs him, without offering him any medical assistance. Another officer, a Black man, arrives on the scene and also fails to administer any aid to the victim. Meanwhile, Slager, retraces his steps a few feet, picks up a dark object, widely believed to be the taser, casually saunters back over and tosses the object near the victim’s body. The nonchalance, the lack of urgency, is almost as unsettling as the murder itself. The casual way that Slager aims, fires and snuffs out Walter Scott’s life is devastating.

On Tuesday, Slager was charged with first-degree murder. I am glad there are charges. I hope for a conviction. But charges and convictions are not the ultimate solution here. We need the killings to stop. We need the state to stop creating a culture that facilitates the taking of Black lives and that induces Black mothers' tears. Walter Scott belonged to somebody. He has brothers, parents who have been married for 50 years; and he has four children of his own.

We keep shouting that Black lives matter, for one simple reason. We want Black folks to live.

Lest anyone be tempted to excuse this as again just another bad apple, the San Francisco chief of police fired eight police officers late last week, after evidence surfaced of them trading racist and homophobic text messages. One text message read: “All niggers must fucking hang.” And another said, “cross burning lowers blood pressure. I did the test myself.” How many rotten apples do we need before we start chopping down the apple tree?

How do we find both explicit and implicit disregard for Black life among police in locales as disparate as San Francisco, North Charleston and Ferguson?

One day after Slager’s arrest, Black folks are being treated to an endless replay of this murder on cable news. There is no collective sense that being inundated with video and imagery of these racialized murders of Black men by the police might traumatize and retraumatize Black people who have yet another body to add to a pile of bodies. Black death has become a cultural spectacle.

On Sept. 11, 2001, parents called into news stations around the country to ask them to stop re-airing footage of the planes crashing into the Twin Towers. News stations complied. Yet Black children got up and went to school this morning, and went to bed last night with video of a white police officer callously killing a Black man running on loop. What about our children? What about their sense of safety? Let me count the ways that seeing the police murder of Black people erodes their fragile sense of security. Who should they turn to when they are in danger?

Police officers (of all races and genders) routinely act with excessive force and callous disregard toward Black people. But Black people’s witness of racial atrocity is never believed on its own merits. Instead, white people need to be able to pull up a chair and watch the lynchings take place over and over again, to DVR them, fast forward and rewind through them, to smother Black pain and outrage and fear in an avalanche of cold, “rational” analysis. Meanwhile, minds rarely change.

The endless analysis never seems to lead to an honest place. An honest place would look like asking critical questions about the culture of policing. Here are a few of my many questions:

Why do racists find policing to be a safe harbor for their offensive and dangerous views? And what about the culture of policing foments and encourages (and, perhaps, even rewards) anti-Black sentiment? It seems like the “good” cops are the exception. And even if they aren’t, how are any of us supposed to tell the difference? Why do we continue to believe that the individual (and even heroic) good acts of individual police officers in any way ameliorates a system whose wheels are oiled with the unjustly spilled blood of so many slain Black people?

These are just some of the questions we need to ask.

As long as white people remain unconvinced that policing is a fundamentally anti-Black, racist enterprise in this country, the police will keep killing unarmed Black people.  As long as the ridiculous argument that this is “just an isolated incident” proceeds unchecked, Black bodies will continue to pile up. Local juries might opt to throw the book at “individual” suspects, but individual solutions will not solve the epidemic of police murder. As of February 2015, the police were killing someone every eight hours. That is simply too much killing, and it far outpaces the police murder rate in every other developed country.

In this cultural climate, it will take, it seems, an ocean of Black bodies to convince white people that structural racism is a problem. Therefore, I am not convinced in this moment that this video means anything. We watched Eric Garner die on video. We watched Tamir Rice die on video. The officers who killed both of them are free. Black people have no reason to trust that video evidence will lead to any significantly different outcome in the case of Michael Slager.

To put it the way Dr. Treva Lindsey put it, “These extrajudicial killings are at the heart of U.S. democracy. At the core of our nation's history is [Black people’s] annihilation and dehumanization- how do you 'reform' that? So save me the good cops argument- we are indicting the ENTIRE SYSTEM.”

She’s right. The whole damn system is guilty as hell.