Even by the standards of today's GOP, the ex-governor is no moderate. His affirmative action policy proves it 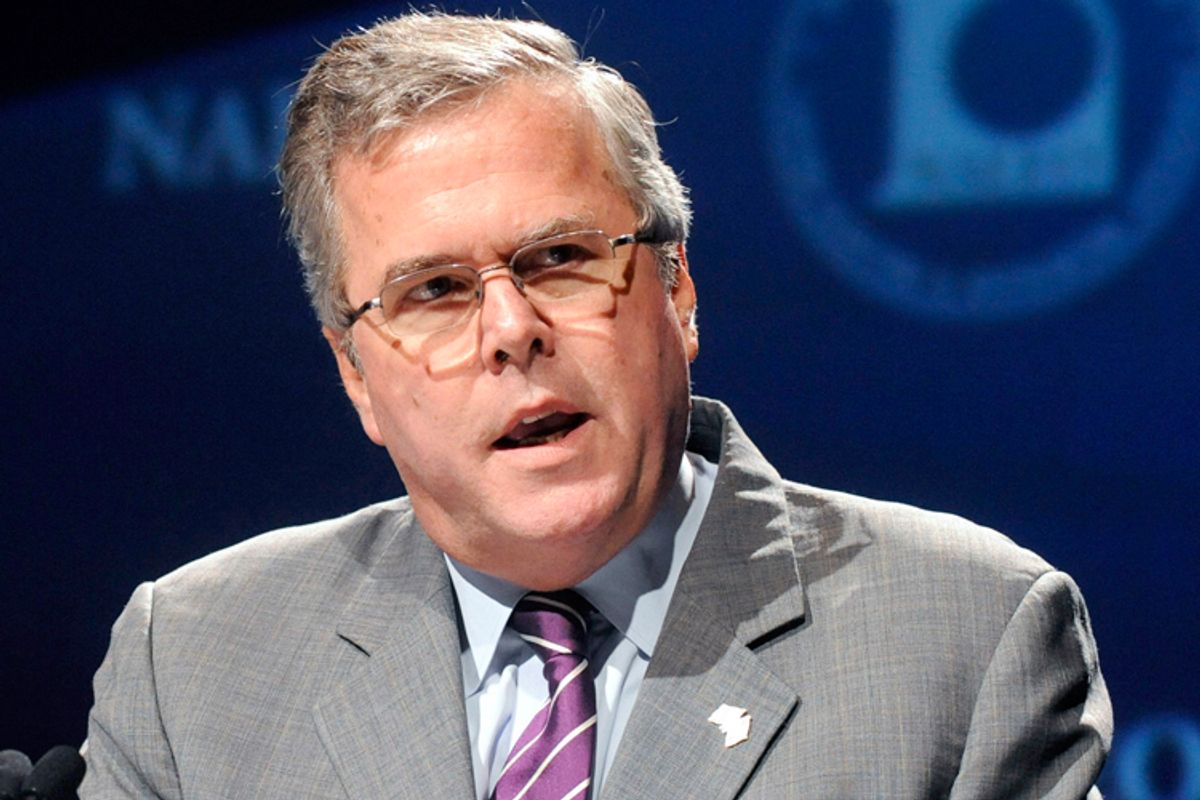 If you’re paying just a scintilla of attention to the 2016 presidential campaign, you probably know already that Jeb Bush, the former governor of Florida, is supposed to be the standard-bearer of the Republican Party’s moderate wing. But if you’ve paid just a scintilla of attention to the ideological drift of the party during the past few decades, you also probably know already that the term “moderate” is, in the context of today’s GOP, quite relative. Indeed, as the University of Northern Florida’s Matthew Corrigan told me in February, Bush’s actual record as governor of the Sunshine State was about as right-wing as any conservative activist could have reasonably hoped.

Yet because Bush, unlike fellow candidate Sen. Ted Cruz, presents himself as the kind of politician who can take “yes” for an answer, the moderate label has stuck. And there’s little reason to expect that a protracted campaign against either Wisconsin Gov. Scott “I got married on Reagan’s birthday” Walker or the Alex Jones of the U.S. Senate will do much to dislodge it. Its foundation is Bush’s seeming willingness to operate within what some liberals like to call “the reality-based community” (albeit on its rightmost flank). As far as the horse race narrative is concerned, his actual policy preferences are secondary.

As a quick look at what little fundraising information we have shows, this double-standard has benefited Bush already. Here’s the thing about the “Jeb Bush, moderate” narrative, though: Even on its own frivolous terms, it’s mistaken. Sure, Bush may be more inclined to acknowledge that 2+2 does not equal 5 — even if the great “Ronaldus Magnus” said otherwise. But what comes through clearly in a recent Washington Post report on his elimination of affirmative action in Florida’s public university system is that Bush, much like the rest of the contemporary GOP, is not one to let stubborn facts get in the way of movement conservatism orthodoxy.

To understand why the report should be seen as such a threat to Bush’s moderate bona fides, it’s worth recapping what he did to affirmative action as governor of the state. The most important takeaway — and the one he’s been happy to repeat as a pseudo-candidate on the pseudo-campaign trail — is that, in 1999, Bush nixed race-based college admissions. He did so via an executive order, which he signed “without inviting public comment,” according to the New York Times, and with promises that the plan he was implementing in its place was about “embracing diversity, not rejecting it.” And while affirmative action has been curtailed or banned in seven other states, those were all enforced after public referenda.  Bush is still the only governor to have done it himself.

As you might expect, the move, which was one of the most significant of his tenure, was controversial. At one point, it even inspired two African-American state legislators stage a Capitol sit-in. Despite his fondness for decisive, executive action, Bush responded to the outcry with at least feigned consternation, saying at one point that the criticism directed his way had created “a difficult time” for him and that he “carried a heavy heart around” throughout the kerfuffle. Regardless, Bush stuck to his guns, and promised that the order would ultimately “create more opportunity for people.” Unlike an outright ban via ballot initiative, which he described as a “divisive” possibility, Bush promised that his plan would lead to “a place where opportunity is real and lasting, not false and forced by government.”

Now, a decade-plus later, Bush says his order was a success. “We ended up having a system where there were more African-American and Hispanic kids attending our university system than prior to the system that was discriminatory,” the Post reports him as boasting recently, to a gathering of right-wing activists. And that sounds pretty good, I’ll grant. But Bush, like any politician, chooses his words carefully; the conjunction joining “African-American” and “Hispanic kids” is there for a reason. It may be true that there are more students from black and Latino backgrounds in Florida’s university system than before, but according to the Post, that’s largely because of “the state’s booming Hispanic population” and the fact that, between 2000 and 2013, overall freshman enrollment increased by 35 percent.

If you refine your lens and look at the numbers for African-Americans, the picture looks considerably different; and not for the better. The Post reports that African-American enrollment at the the state’s two best public schools — the University of Florida (UF) and Florida State University (FSU) — is not growing, and has not plateaued. Instead, it’s shrinking. Back when Bush signed the order into law, for example, the portion of African-Americans in the state college system’s entire freshmen class was 18 percent. By 2009, that percentage had fallen to a mere 15. At UF alone, the share of the freshman class that was black fell from 9 percent in 2011 to just 6 percent by 2013. At FSU, the number of African-American freshmen between 2000 and 2009 fell by 15 percent.

Of course, there are ways to spin these numbers to look less-bad, at least up to a point. Some of the results, state officials told the Post, can be attributed to changes in the way the Department of Education classified race, which were implemented in 2010. And it’s not the case that black students are not going into Florida’s college system altogether. Rather, according to the Post, it’s that they’re becoming “increasingly concentrated in the state’s lesser-known regional schools, which are in larger cities and have less stringent admissions requirements.” But the fact that Bush declined to comment on the story, while not definitive, is nevertheless telling; and his spokesperson’s claim that the changes “allowed students to succeed on their own merits,” as if the prior system was a get-into-college-free hand-out, is risible at best.

By any reasonable standard, then, Bush’s elimination of race-based college admissions has been a failure — assuming, of course, the governor’s stated goal of increasing opportunity was sincere. Yet while that might come as a surprise to the hardcore conservative activists whose support (or acquiescence) Bush will need to win, it should not surprise anyone else. As I joked to my partner when I first saw the Post’s story, the headline could be rewritten as “Elimination of policies designed to boost minority enrollment leads to lower levels of minority enrollment.” In a less dysfunctional political culture, the story would be a real “dog bites man” affair. But, then again, if that was the reality of American politics, Jeb Bush wouldn’t be seen as a moderate, either.