HBO's "Game of Thrones" is rewriting Westerosi history, and the show has never been more spectacular 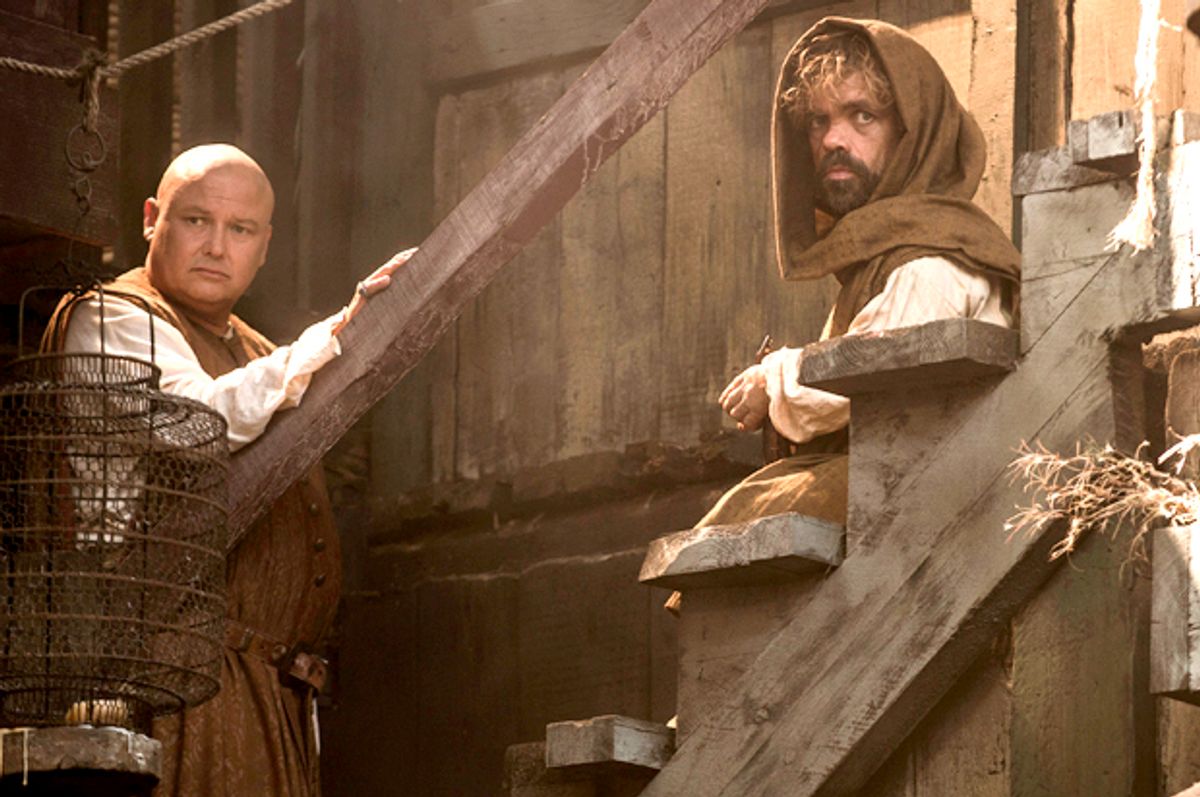 The hype of HBO’s “Game Of Thrones,” returning Sunday night, at times seems larger than the show itself. The story has two worthy points of entry—George R.R. Martin’s series of books, titled, lengthily, “A Song Of Ice And Fire,” and the TV show, brought to screen by D.B. Weiss and David Benioff. The story, in whatever form, inspires devoted fans—fans who will cosplay the characters, obsessively gif the episodes, cut YouTube videos that only remotely make sense if you’re a fan of the show, and foment a vast, mostly online world of conspiracy theories, speculation, and possible histories for the characters in Westeros. “Thrones”—its stylized braids, its reliance on brothels, its viciously brutal violence—has become a cipher of sorts in our culture. Other shows ape it (“Marco Polo,” “Vikings,” and “Outlander” all owe their existence, in some way, to “Game Of Thrones); the rest of media, from the listicle of gifs to academic presses, can’t produce related content fast enough. There’s something in the water; “Game Of Thrones” has us drinking dragon’s blood.

It’s hard to blame fans. “Game Of Thrones,” book and movie, makes for a captivating, immersive world. It’s a universe both frighteningly similar to and fascinatingly different from our own, which offers audiences a chance to process nationalism, gendered violence, identity, climate change, and the ever-shifting notion of duty and honor, in a world with dragons and ice zombies and occasional practitioners of fire magic.    The story’s mortification of the body runs on the surface, not in the subtext; everything, in “Game Of Thrones,” is life and death. The world is very beautiful and very dangerous, and life is both spectacular and too short. It’s an epic that is extraordinarily empathetic towards its characters, even the ugliest, most craven ones.

And yet. The hype has, at times, seemed far too overblown for a story that was verging on mediocre. The HBO show has had its low points—like much of last season. The characters seemed without purpose in season four, as the plot spooled out. The revelations of season three—such as the fact that Jaime Lannister is a redeemable human being, and Sansa and Arya Stark are now desperately, completely alone—didn’t seem to come to much of anything in the following year of storytelling. The story moved slowly; the players got grating; and, deprived of the character drama that made the show so compelling, “Game Of Thrones” began to treat gratuitous violence and sexual exploitation as its bread and butter. The viewers are still there, so undoubtedly, HBO knows its audience. But for many fans and critics, myself included, the show lost some of the graceful poignancy that made it, well, magical.

But if the show has its low points, the book has whole Sloughs of Despond. After the first three installments—solid bricks of paper and glue, printed densely with flights of wonderful fancy—Martin noticeably ran out of steam. “A Feast For Crows,” when it did finally show up, was a much shorter and slimmer volume; “A Dance With Dragons” didn’t publish until the first season of “Thrones” had already concluded, 15 years after the first installment came out in 1996.

Not only have the books been coming more slowly; but in my decidedly subjective opinion, they’ve been coming worse, too. “A Storm Of Swords,” the third installment, was the series pinnacle—a book packed with the Red Wedding, Purple Wedding, and Tyrion’s confrontation with his father Tywin, which the show took two lengthy seasons to get through. A Feast For Crows,” a set of vignettes about several new characters, failed to move the story along in a satisfying way, and had the downside of being far too short to say anything interesting.  And “A Dance With Dragons,” in 2011, was a disappointingly mediocre read—one whose plot twists felt unearned, after reliving the glory of the first book with the first season of the HBO show. It read like a book whose writer had been rushed; it read like a book whose author was out of inspiration. “A Dance With Dragons” has just as many macguffins and easter eggs and avenues of riddled exploration to pick apart—but it lacks the passion of the first three books, and therefore, instead of breadcrumbs leading to a finale, it reads like a volume chock full of red herrings. (It does not help that the climactic ending scene turns out to have been written as a result of a bet about football between Martin and a friend.)

Which is why, without seeing the episodes, I had my concerns about the fifth season of “Game Of Thrones.” Not only did the show seem to be losing its touch, but the books weren’t going to be able to help, either. The series, in this crucial moment where the books had not yet charted out the plot and the show had run out of textual material, looked doomed to flounder.

The exact opposite has happened. “Game Of Thrones” has responded to the mediocre quality of the later books—and its own difficulty adapting them well, in the fourth season—by throwing the books out. In 2014, in my previous position, I made a list with a few coworkers of the major differences between the books and the show. The first few episodes of season five would double that list. Characters that never crossed paths in the books confront each other in crowded pubs. One Stark sister is swapped out for another. A certain half-man’s path is remapped and rewritten entirely, cutting a whole cadre of minor characters along the way. There are subtler changes, too—a foregrounding of certain characters, certain conflicts, that otherwise would not have taken up much space; a focus, too, on friendships that sparked in the show’s storyboarding and then became an integral part of the scenery.

Some fans, I imagine, will be jarred by these changes. Weiss and Benioff’s interpretation of the books isn’t what everyone gets out of them, and there will be bitterly discussed creative choices in the trenches of subreddits and tumblr reblogs. But what’s clear is that if the showrunners had not taken matters into their own hand, “Game Of Thrones” would have petered out aimlessly. This is the first time that the show will be able to decisively write Westerosi history; even if it’s different from what Martin will eventually write, for most fans, the show’s interpretation is going to get there first. Instead of a fanboy’s biased retelling of the series, the fifth season reads like the edited manuscript of a messy first draft. Sacrifices had to be made (Arianne Martell’s absence stings this particular fan), but the result is a story that runs smoother than ever, with no trace of middle-aged stumbling that can plague book series and TV series alike.

Most importantly, in the fifth season’s bold, nimble storytelling, it’s made the hype around “Game Of Thrones” seem reasonable again. This is a show worth championing, because it is a show that does incredible things. In the fifth season, the story has been distilled to just the moments of pathos and characterization and gorgeous direction that make the story work. The story has become, once again, about what it means to be a person in a world gone mad, whether that is by endlessly long winters, or war, or dragons flying in from the east. It’s a human story, and it’s one that “Game Of Thrones” is, once again, telling very well.