Classic rock and the big arena show: Who will pack the stadiums when the legacy acts retire?

The Stones, Paul McCartney, Bruce Springsteen -- these guys can't play on the road forever. What then? 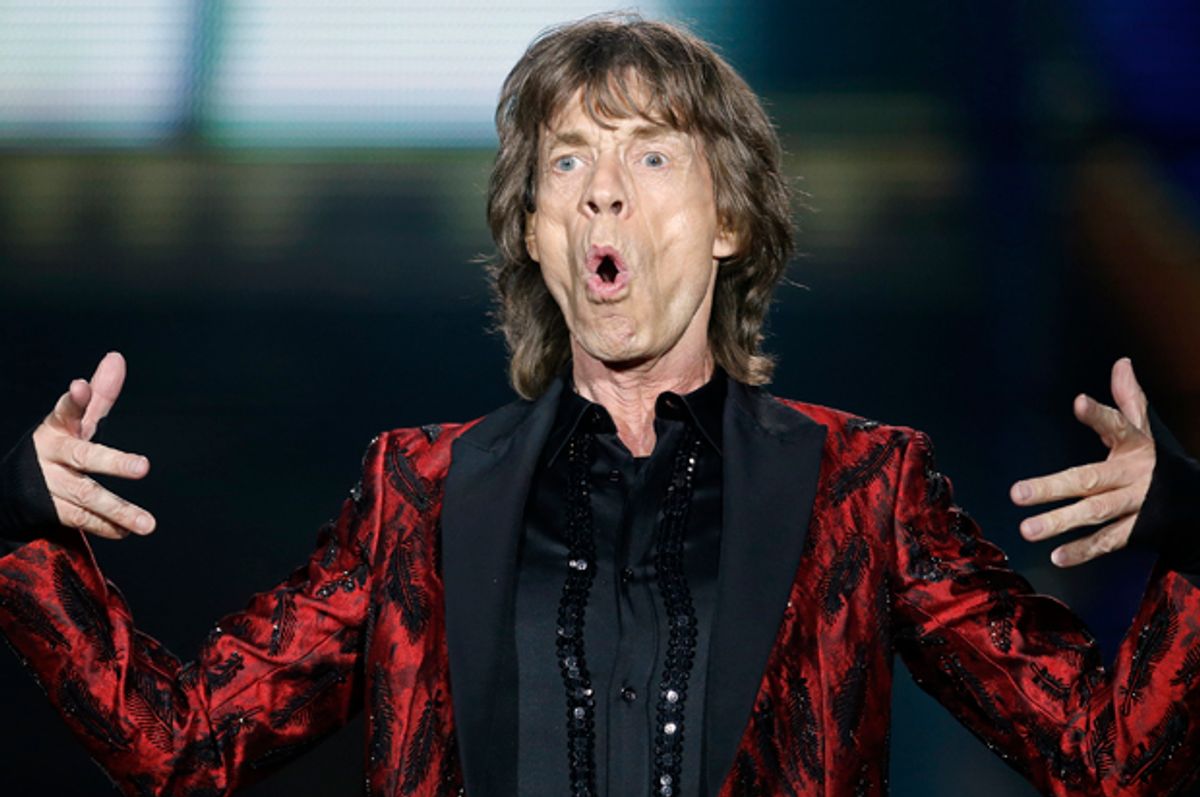 On Monday, tickets go on sale for the Rolling Stones' ZIP CODE tour, the band's first North American road trip in nearly a decade. Unsurprisingly, the trek is hitting a mix of outdoor baseball and football stadiums, including a late-May gig at Ohio Stadium and a July 4 concert at the Indianapolis Motor Speedway. However, the Stones aren't the only act roaming the stadium circuit this summer and early fall: In the States alone, rock staples (AC/DC, Foo Fighters), country music stars (Kenny Chesney, Jason Aldean, Luke Bryan) and pop darlings (One Direction, Taylor Swift) are all either doing tours or one-offs at these huge venues.

If it feels like there are more of these bigger concerts events happening in recent years, it's not just your imagination. Billboard noted that 2014 had the most stadium shows--close to 100--since 1994, while the publication's 2014 year-in-touring wrap-up reported that promoter Live Nation had "a record year for stadiums" last year: "The firm promot[ed] about 70 profitable shows that sold more than 3 million tickets." Couple this increase with healthy arena and outdoor amphitheater schedules, and the continued popularity of multi-day festivals--Billboard notes that in 2014, promoter AEG Live had "more than $912 million in box office, driven by its festivals; the Coachella Valley Music & Arts Festival reported its highest gross ever, $78.3 million"--and it's easy to see why it feels like we're in the midst of a golden age of live music.

Or are we? In 2013, Billboard's 2013 Boxscore stats — which include concerts in large spaces such as arenas, seasonal outdoor amphitheaters and stadiums, and exclude venues such as casinos and nightclubs — revealed skyrocketing attendance and gross ticket sales. However, the 2014 Boxscore stats found more modest numbers in North America: "Domestic grosses are up 3.4 percent -- more than the 1.7 percent increase of 2012 but just a fraction of 2013's 26 percent increase." More troubling, 2014's increases "are largely attributable to higher ticket prices, given that North American attendance is down 1.5 percent compared with an increase of 23 percent in 2013." Globally, things were even more sobering: "Grosses and box office are down 3.8 percent and 6.3 percent, respectively."

Nobody interviewed in the 2014 Billboard article seemed particularly worried by the dip in momentum (or the mention of higher ticket prices), perhaps because the touring and festival industry remains vibrant. But when I look at exactly which artists dominated the upper echelon of road warriordom in 2014, I can't help feeling a bit concerned about the coming years. A third of the Top 25 tours involved veteran classic rock artists with limited touring years left--including Billy Joel, Paul McCartney, the Eagles, Elton John and Bruce Springsteen & The E Street Band — while another third involved pop/R&B/hip-hop artists of varying stature and popularity. What happens to the stability of the touring industry when the dependable classic rock bands retire, or the pop stardom of a reliable draw fizzles?

In the case of the latter, there will most certainly be shiny new Top 40 stars primed and ready for world domination. (There always are--look at Sam Smith, Ariana Grande and Ed Sheeran, arena acts all.) Yet in the case of the the heritage rock acts, it's unclear whether there are heirs to the throne waiting in the wings. Younger bands such as the Black Keys, Muse, Green Day and Imagine Dragons have made the leap to arenas in recent years (although it remains to be seen if all will stay at this level), while perennial draws such as Dave Matthews Band, Bon Jovi and Pearl Jam--three 2014 blockbuster touring acts that are arguably carrying on the classic rock torch--aren't going anywhere any time soon. Perhaps it's more precise to imagine a future where the roster of stadium and arena acts is more transient and less predicated on decades of tradition.

That's not necessarily a bad thing--and, as last year's top money-earners reveal, the touring industry is not completely dependent on these seasoned acts. But it is a considerable shift to imagine an arena and stadium show landscape without certain veteran rock 'n' rollers as anchors. It's even more jarring to realize that the pillars of an industry for decades (decades!) are going to disappear sooner rather than later. This isn't a sign that rock 'n' roll is on the verge of dying--something quite obviously untrue--but it is an interesting trend, especially since classic rock has never been more popular as a radio format, even among younger listeners. The continued popularity of live classic rock is due in part to multiple generations enjoying this music together. And even though many of these bands still touring are down a member or two (or don't quite have the vocal power they once did), there's nothing quite like hearing familiar, famous songs played by the originators. These musicians are the experts, after all, the seasoned players who wrote and popularized legendary riffs, licks and rhythms. Seeing this history up close and in person is an irreplaceable experience.

Post-retirement, many questions remain for fans who crave hearing these classic rock songs live. Will they seek out sonically similar (but smaller) bands, or just stream old performances of their icons on YouTube? Will we have more sons and daughters of stars touring, the way Jason Bonham's Led Zeppelin Experience keeps father John Bonham's spirit alive? Will tribute bands and cover songs continue to grow in popularity? How and where we consume these songs is going to change soon; what form this takes remains to be seen.

Still, on a more exciting level, these impending changes open the door for new ways of approaching large live music shows. Perhaps there are more all-day festivals like the one Foo Fighters are throwing in Washington, D.C., or more traveling package tours, which are already popular for '90s bands looking to re-live alternative nation's halcyon days. Yet even these endeavors have a downside for consumers: For example, one top-priced ticket to see this summer's Barenaked Ladies/Colin Hay/Violent Femmes tour--which is tending to play small outdoor venues--is going for well over $80 after fees in some markets. Plus, the advantage of arena tours is they often hit underserved markets or smaller towns, which don't have the same infrastructure of live music venues as bigger cities. Clustering shows together in certain places--like U2 is doing for their summer 2015 tour--makes it a pricey proposition for out-of-town fans.

And here's where the economic reality of a shifting touring landscape comes in. Packs of bands operating in the netherworld between theaters and arenas, who don't want (or don't have the audience support) to move up to the next level command far more money when they play smaller venues. Sometimes this results in higher ticket prices for consumers, who can either pay up to see their favorite bands--or simply stay home. Plus, having to travel to see music is an expensive commitment, when you throw in travel, airfare, lodging, food and tickets. Certainly festivals such as Lollapalooza, Coachella, Bonnaroo and Austin City Limits are having no problem drawing crowds--but it's also exacerbating a phenomenon where live music is a luxury good available to the few who can afford it.

This phenomenon isn't limited to music, either; the price of tickets to sporting events has also skyrocketed in recent years. At least the abundance of streaming live events (shout-out to Couchella!) means that people have greater access to concerts, even if it's on a TV or iPad. Still, I can't help romanticizing in-person attendance arena and stadium shows--not in a rockist, "Everything was better back when rock 'n' roll bands performed!" sort of way, but as it pertains to the whole experience of seeing a big show.

Although intimate club shows and well-produced theater shows have their charms, there's nothing quite like immersing yourself in a huge, over-the-top production full of spectacle--Taylor Swift's costume-laden scene changes, Justin Timberlake's snappy choreography or the jaw-dropping digital overload of Nine Inch Nails' recent tours. Even relatively sparse arena shows--from Foo Fighters' bare-bones, music-first approach to R.E.M.'s light- and video-centric stage plots--still crackle with a different kind of buzz and energy than other gigs. These are the kind of events that everyone should have the chance to experience in person, without having to drain their bank account to do it. The days of paying $12.50 to see the Stones are never coming back, but as Kid Rock and his $20 ticket tours have demonstrated, it's not impossible to produce a large-scale show and provide value to budget-conscious fans in 2015. Live music and affordable ticket prices don't have to be mutually exclusive.