Bad news, America: The neocon playbook is getting plenty of use these days 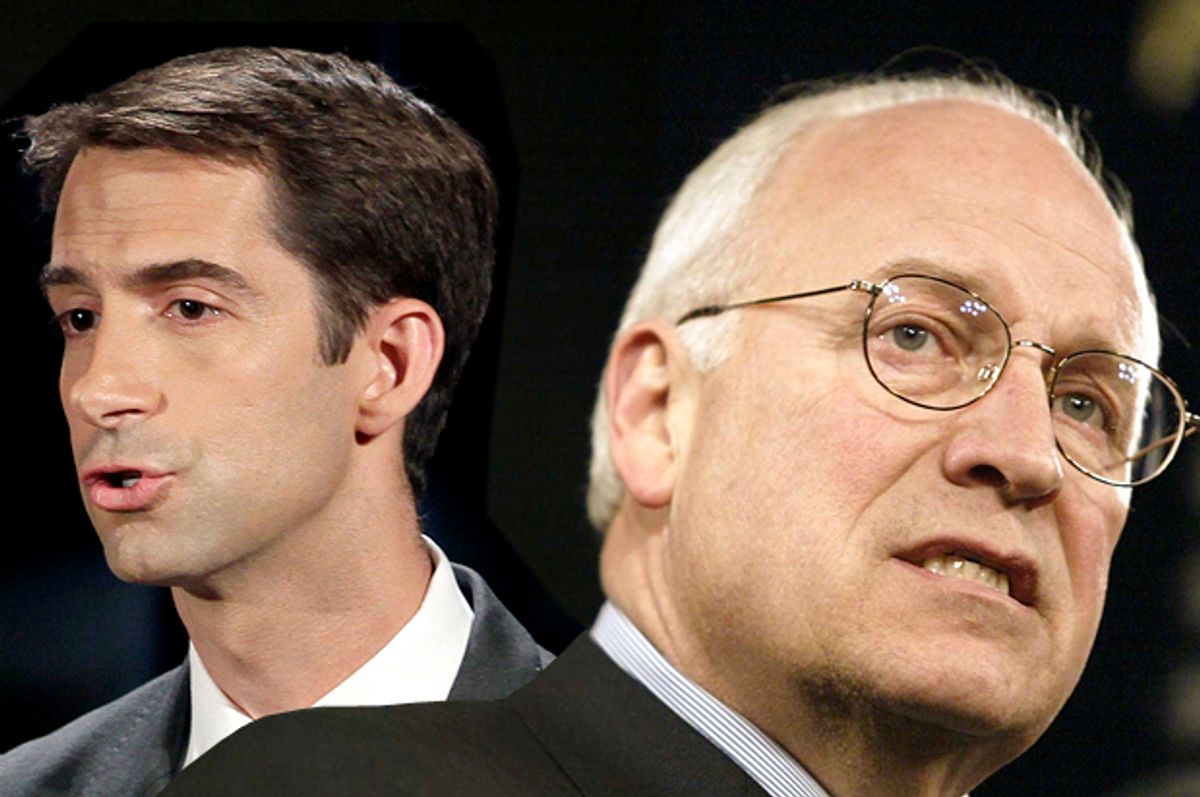 Move over Lindsey Graham and John McCain, there's a new bellicose sheriff in town. He may be just 38 years old and his only prior jobs of note might have been as a low-level officer in the military and a one term congressman; but now that he's been in the US Senate for three months, Tom Cotton evidently sees himself as a geopolitical and military genius, the GOPs new leader on national security.

Cotton appeared on a conservative radio show this week to assure Republicans that a hypothetical war with Iran would be a cakewalk:

COTTON: Even if military action were required – and we certainly should have kept the credible threat of military force on the table, it always improves diplomacy – the president is trying to make you think it would be 150,000 heavy mechanized troops on the ground in the Middle East again as we saw in Iraq. That’s simply not the case.

It would be something more along the lines of what President Clinton did in December 1998 during Operation Desert Fox. Several days of air and naval bombing against Iraq’s weapons of mass destruction facilities for exactly the same kind of behavior, for interfering with weapons inspectors and for disobeying Security Council resolutions. All we’re asking is that the president simply be as tough in the protection of America’s national security interests as Bill Clinton was.

As my colleague Simon Maloy observed yesterday, Cotton obviously believes he is being especially clever by evoking Bill Clinton as an allegedly "tough" protector of America's national security interest with his allusion to Operation Desert Fox back in 1998, but in fact the history shows that Clinton's action was seen by Republicans at the time as a cowardly case of wagging the dog. (In his defense Cotton was still a teenager and was undoubtedly more interested in the lurid details of the Starr Report which was in all the headlines at the time.)

Recall this 1999 memo from Jeb Bush's favorite neocon group The Project for a New American Century in the wake of the bombing operation:

Now that the dust has settled from the 70-hour aerial attack on Iraq, it has become clear that the only solution for the threat Iraq poses is to remove Saddam... Support for the opposition should be only a part of a broader political-military strategy, one which must include a willingness to send U.S. ground forces into Iraq to complete the unfinished business of the Gulf War.

Funny how that works, isn't it? Within a couple of years, Clinton's "tough" bombing of Iraq was used as a major rationale for invasion because it allegedly failed to stop Saddam's WMD program. (It famously turned out that the WMD program had been abandoned even before the bombing campaign, but who's counting?)

Still, Tom Cotton's comments surely make Neocon O.G. Dick Cheney feel all warm inside. He undoubtedly sees the fresh faced Senator as the son he never had. He seem to instinctively know that the first step to war is to make bombing sound like a reasonable step by reasonable people. The only thing Cotton left out in his comments was that the Iranian people would greet our bombs as liberators.

Those who believe the Cheney faction of the Republican Party has been repudiated need to reassess. After all, this newly minted senator was able to get nearly the entire Republican Senate caucus to reflexively sign off on a letter telling the leaders of Iran not to bother negotiating a nuclear pact with the president because they planned to throw it in the trash at their first opportunity. At this moment we even have Democratic Senate leaders publicly pushing against the president and setting the stage for a showdown between the executive branch and the congress over the Iran agreement. So perhaps this is a good moment to take a look at what the Godfather of GOP national security it thinking about Iran these days.

Luckily for us he has a new book out so he's making the rounds of right wing media and, as usual, letting his neocon freak flag fly. Earlier this week he appeared on Hugh Hewitt's radio show and weighed in on the Iran nucelar framework with his trademark measured tone:

[I]f you had somebody as president who wanted to take America down, who wanted to fundamentally weaken our position in the world and reduce our capacity to influence events, turn our back on our allies and encourage our adversaries, it would look exactly like what Barack Obama’s doing. I think his actions are constituted in my mind those of the worst president we’ve ever had.

It never fails to amaze me to recall that when George W. Bush chose Cheney as his running mate (Or rather Cheney chose himself as Bush's running mate) the Villagers applauded the announcement with the relieved declaration that "the grown-ups were back in charge." No more sex and scandals, just serious, reflective, responsible governance. Here is a typical comment from that time:

You know, remember when Bill Clinton held one of his first Cabinet meetings out of Camp David for an encounter session for his new Cabinet secretaries? Yes. You are not going to -- now the experienced grown-ups are here. Dick Cheney and Don Rumsfeld are not going to share their inner child with their fellow Cabinet members, and I think it's about time. It's so reassuring to have grown-ups back in charge.

In retrospect, we clearly would have been better off knowing that Cheney and Rumsfeld's inner-children were a couple of torturing pyromaniacs.

Cheney's assessment of President Obama is not that he's naive or wrong-headed for pursuing a peaceful plan to keep Iran from developing the bomb. In his mind, it's perfectly logical to believe that he's consciously setting out to weaken and ultimately destroy America. This is the paranoid worldview of the farthest, most fetid corners of the right wing fever swamps. It's the kind of talk you'd expect from Michael Savage or Ann Coulter, not a former very powerful Vice President of the United States. But while the beltway has expressed collective revulsion toward those crude Tea Partyers who come from around the country wearing funny hats and waving around the Gadsen flag on the Washington Mall, they still welcome Dick Cheney and his daughter and the rest of the extremist neocon claque who pretty much tore up the middle east and left it ablaze in a series of bonfires for someone else to put out.

And here's a scary thought. Dick Cheney, renowned among the Villagers back in 2000 for being the "grown-up" who was going to be there to oversee the grinning doofus the Party had chosen as its standard bearer, seems to have picked the next callow, young git upon whom he thinks he can imprint his dangerous philosophy. When Hewitt asked about President Obama chiding Scott Walker for promising to repudiate any deal with Iran the minute he gets into office, Cheney said:

[W]hat he’s saying in his criticism of Governor Walker I think probably Governor Walker welcomes. It’s almost like a paid commercial. I heard today that as soon as the statement came out from Obama criticizing the Governor, he immediately sent out letters to all of his supporters. I’m glad he did that.

He successfully steered one ill-informed former Governor into a misguided war on the basis of fatuous chauvinism, why not try it again? True, their actions succeeded in making Iran much stronger than it otherwise would have been, but who's counting? They proved they can always just make up a casus belli and get away with it. After all, as one neocon wag was said to have quipped at the time of the Iraq invasion, "anyone can go to Bagdad, real men want to go to Tehran." For Real Man Dick Cheney's that dream will never die.