This is what white supremacy looks like: A party at the Bundy Ranch, a funeral in North Charleston

One year ago, Cliven Bundy threatened war on the federal government. This weekend, he's throwing a party. 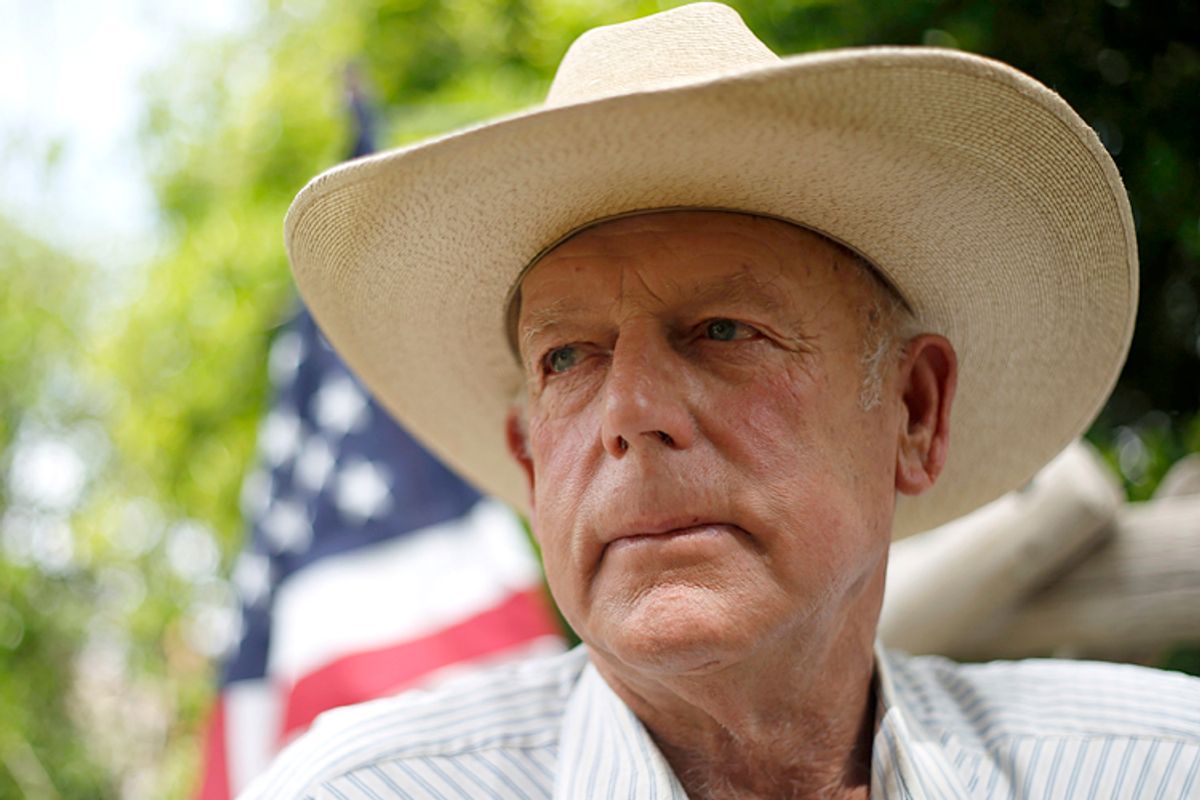 This weekend, the Bundy ranch in Nevada will host a reunion to celebrate owner Cliven Bundy’s continued lawlessness. Bundy became a hero of the far-right a year ago when his refusal to pay 20 years’ worth of federal grazing fees for his cattle—totalling $1.1 million—brought federal agents to collect, which Bundy and several hundred armed right-wing militia members repelled with a show of force. Fox News and other right-wing news outlets raced to the ranch to report on what Bundy supporters called the “Second American Revolution” and the “American Spring,” the moment when the rhetoric of “tyranny” and “totalitarianism” under President Obama would materialize into actual armed conflict against the loathsome federal government.

For anyone confused about whether a political movement which celebrates the Second Amendment and rallies around an iconography of war and rebellion is interested in actual combat against the “liberal” federal government, the Bundy affair answered any remaining questions: Yes, the prospect excites many far right-wing conservatives like nothing else. Fox News’ Sean Hannity was giddy in his initial introduction of Bundy as someone threatening a “range war” against the federal government. Fox News covered the ranch saga daily, with Bundy presented as a hero, and Hannity alone would feature Bundy on his show numerous times over the several weeks of the standoff, at times giving the rebel rancher a primetime microphone multiple times a week to rally right wingers to his cause.

Two extremists, Jerad and Amanda Miller, who traveled to Bundy’s ranch, only to be turned out, would go on to execute two Nevada police officers in June, draping the familiar Gadsden “Don’t Tread on Me” flag over the corpses and pinning a note to their government victims saying, “This is the start of the revolution.” Jerad and Amanda heard the call for a “range war” and took it upon themselves to be the vanguard of the Bundy rebellion.

In the end, the two officers were the only casualties and Bundy’s boys went home with not so much as a band-aid, as federal agents were backed down by a veritable army of militiamen. The government blinked, and Bundy was allowed to continue to flout a law he’d decided didn’t apply to him.

That, ladies and gentlemen, is white power.

And this is black vulnerability: In the intervening year since the Nevada showdown, much of America has become outraged by a series of cases of unarmed black men killed by police. The epidemic of police violence against black men has been ongoing for decades, of course, but a confluence of a new public attentiveness and video evidence in some cases has pushed the crisis into the mainstream discourse.

The latest case, the shocking murder of Walter Scott in North Charleston, SC, should be held up for comparison with the Bundy standoff. Before the video surfaced and contradicted his report, Scott’s killer, Officer Michael Slager, justified his use of deadly force by claiming that Scott gained control of Slager’s taser, thus making him a threat worthy of fatal elimination.

So the threat of a 50-year-old black man with a taser is so great that 8 shots into the back can be justified — but line up hundreds of white men on horseback and armed to the hilt with military-grade weapons, and agents of the government are powerless.

A single unarmed black man in Staten Island selling loosies is considered enough of a threat to be choked to death in broad daylight. Yet armed ex-military men protecting a criminal with high-powered rifles trained on federal agents are not enough of a threat to law and order to similarly merit the use of force.

Is that what we learn when we look at the cases? Does the specter of some imagined violent nature of black men exceed the fear stoked by white men with actual guns, actually pointed at state agents, fingers on triggers?

Or is it that the Bundy army was too much of a threat? The simmering anger on the American right since President Obama’s election has seethed just at the precipice of violence, and for Obama’s troops -- as they would be viewed -- to rightly fire on white people angry about taxes would have no doubt enraged extremists to a degree unseen since perhaps the 19th century. These weren’t the creepy cultists of the Waco standoff; Bundy was a hero headlining Fox News, the Drudge Report, and the other leading conservative news outlets. He would have been a martyr to Tea Partiers and the far right.

The militia and “Patriot” movements have seen “stunning growth” during the Obama years, according to the Southern Poverty Law Center, a group that tracks violent extremism. Bloodshed at the Bundy ranch could have very well sparked violence elsewhere, just as the federal sieges at Ruby Ridge and Waco during the 1990s animated the nascent militia and Patriot movements.

What lesson then have we learned from Cliven Bundy? What lesson do we learn from Walter Scott? Or Eric Garner. Or Michael Brown? Sean Bell?Oscar Grant? Amadou Diallo? Ramarley Graham? Maybe the Huey P. Newton Gun Club in Texas has the right idea. Named after Black Panther Party co-founder Huey Newton, the group takes advantage of open carry laws in the Lone Star State to patrol their neighborhoods in squads of men and women armed with assault rifles, what Newton and the Panthers did in Oakland in 1966.

But while Panther-style armed resistance might protect some victims from police violence, it’s hard to imagine it remedying the underlying problem: white supremacy and the assumption of black men as almost supernaturally dangerous. That’s why Slager’s initial story about Walter Scott would have probably sufficed, were it not for the video; the perceived threat posed by black men is that great. And it’s why Bundy’s men were permitted to point sniper rifles at state officials and still not be considered a threat worthy of elimination.

Saturday will be a day of celebration in Nevada; the day brings a funeral to North Charleston.