I can’t forgive my mother

In the typical abuse narrative, the man with the belt is the beast. But what about the woman who watches it unfold? 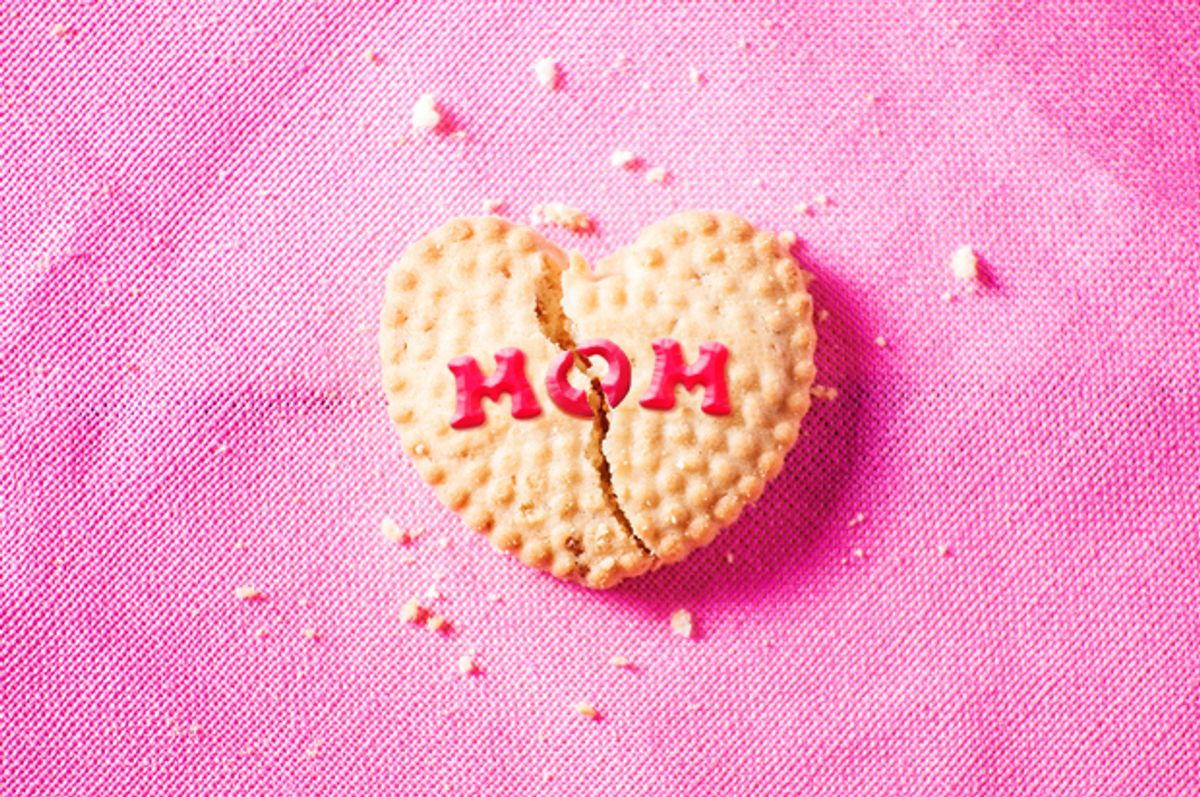 There are few sounds I hate more than my mother’s voice. It’s high-pitched with constant anxiety: When she talks about grocery shopping or a rare excursion to the movies, she sounds like a little girl recounting every gold star she earned at school that day. She pauses at the end of every sentence, as if waiting for approval—an approval I am unable to offer. My mother put her head down the ostrich hole of “oh, he has moods” when my father’s anger scorched our house into nuclear winter. She put on her satin blinders when, as an 8-year-old, I told her I was being touched “down there” by the neighbor boy she baby-sat. She sent him home without a word to his parents or the police; she told me what he had done could have been “far worse.” And when she speaks today, I still hear her “it’s all OK” voice, synthetic and sugary enough to cause diabetes.

In the typical abuse narrative, the man who wields the belt is the beast, the one who must atone if he is ever to be redeemed, to become human. The woman who smoothes ointment on bloody backs and sings “Somewhere Over the Rainbow” is never seen as culpable, even though she closed the door or turned up the radio to blot out the screaming. She is to be pitied: terrified, paralyzed—a bystander to her child’s suffering. But when my mother speaks, all I can imagine is some large female animal rolling on its side, exposing its bare belly.

My responses to her “just because” calls, which are filled with lengthy, water-treading talk of the latest developments on “Scandal” and “Girls” (shows she only started watching because I do) are staccato “OK” and “uh-huhs.” Eventually, she gets the hint and dinner is ready or the tea kettle is whistling. Once, though, she huffed my “uh-huh” back at me, and rage made my skin itch from the inside. The only way to quell that needling pain was to say what I’d felt since I’d first learned to shudder at her touch, even though it bore the cool comfort of aloe, since bluebirds and rainbows became the welts on my back and “why oh I why can’t I” became the throb of my heart: “I don’t even love you.”

As a teenager, I would call my parents’ house drunk and screaming. I would call him a monster. A bastard. Anything and everything you can imagine I’d call him, I did. But I called her just one thing: traitor. I remember weeping, asking, “Why?” and, “Where were you?” Her voice was tiny and confused, like a bird that’s flown through a tear in the screen door and careens between the four corners of the walls. She would say, “Well, he didn’t rape you” and “You grew up fine.” She would say, “Let the past go. You’re the only one it’s hurting.”

Usually, I consider myself a “good” feminist. I can sling the words “context” and “victim-blaming” in a Facebook thread with the best of them. Nothing brings the dragon fire out of me like any variation on, “she asked for it.” I’ve read up on the cycle of abuse, even though that cycle is written on my body in the sad grammar of scars. I should be able to look at my mother and see a girl who came of age when the Don Drapers of the world weren’t ironic antiheroes; whose father abandoned the family when she was small, and whose mother volleyed between jobs, leaving her a note and a cold plate for Howdy Doody time. I should ache for her, not seethe at her—because she is a victim, and victims must be affirmed and supported.

And yet, I can’t forgive her—no matter how often well-meaning friends, or the self-help gurus of the post-Oprah age, suggest that forgiveness isn’t just for the person being forgiven, it’s more for the person doing the forgiving. Forgiveness, I am told, is not “presto! What you did wrong is now right with me.” It is the slow unfurling of a tiny seed. Still, I can’t help but stay inside my hard shell. I punish her by ignoring her texts, leaving “Can you believe Olivia Pope did that?” and “How are you sweetheart?” to dangle in the void, forever unanswered. I curtly refuse Sunday dinners. Whenever she tries a “just because” call, I am busy—and not everyday busy, but that try-again-in-another-six-months busy. When she says, “OK,” she is that little girl in a dark house with only her Howdy Doody doll and the TV screen.  I’m punishing that little girl, but I just don’t care. I know who she becomes.

She was primed for a man like my father, who offered her the solid ground of a steady paycheck and a house in the ‘burbs, even as his fault lines constantly shifted. The battered woman, the woman in the bell jar, unable to breathe, let alone shout, lest she use up too much air. I never think of her as mine. I fear acknowledging her the way some people fear breaking mirrors.  My father eventually went for help and one day, he sat across from me and made amends. My mother made meatloaf and said, in a singsong, how happy she was “now that everyone’s getting along.” The damage she did with a soft voice has lasted far longer than even the most white-faded scar.

When I was a little girl, she was the parent who didn’t take off her belt, whose hands stroked and coddled. She was the ballerina in the cheap pink jewelry box, bobbing on a loose spring, and making it look like dancing. I loved her until I didn’t: There is no other way of describing my evolution away from her. Or, perhaps I should say, I loved her until I blamed her. That blame was like the wind and the wet and the deep heat before a hurricane; it gathered and swelled as I started to tell friends and therapists about the abuse. Over and over, each of them asked me the same question: Where was your mother?

She was upstairs, with the television blared to smother my crying. She was in the bathroom, singing “When You Wish upon a Star” while she smoothed ointment on my back. She was in the car, driving me to an elementary school art show, giving her standard pep talk, “You can do just as well as anyone else.” Never better. She was in the bedroom, rubbing lotion between her fingers as I told her about the neighbor boy, and saying nothing in return, just “Don’t tell Daddy.” An acolyte of what DeBeauvoir called “the religion of Maternity,” she performed all of the rituals — the bedtime stories and the songs during bath times, the sacrament of teaching me to shave my legs and to always blot my lipstick — with a true believer’s zeal. And all of this was love — until my father’s eyes frosted over, until that neighbor boy told me I was so pretty and asked me to keep a secret. It was spun-sugar love, love that didn’t call for valor.

I grew up terrified that being a woman meant living in that scarred, exposed house. In refusing to leave my father, or to do anything other than send the neighbor boy home to his parents with a quick “He’s too old to be baby-sat,” she taught me that violence and entitlement were like the elements — perfectly natural, something to be endured. And here is the truth that won’t bend to that arc of forgiveness: My mother’s neglect could hurt worse than any fist to the gut; it was the death of a thousand tiny cuts, a slow, excruciating bleed-out. If she would not defend me, then maybe I wasn’t worth defending.

In order to stitch myself whole, I’ve had to define myself in opposition to my mother: driven, often to the point of bullishness; loud, at times, deafeningly so; sharp, though I’d cut up other people (and, especially, myself). As I get older, and watch my friends’ Facebook feeds fill up with photos from engagements and weddings, babies and Throwback Thursdays of mothers and daughters dancing in kitchens or playing-dress up, I realize that I miss the breeze on my cheek, the gentle heft of fingers through my hair. I grieve all the soft pleasures my mother showed me to fear.

I am an orphan, of sorts—a motherless child, a rudderless boat. I have had to find the tide of women that would buoy and guide me in teachers and mentors, bosses and heroines of the page and screen. My mother was a house razed by flame, just cinders and nails and matchsticks of support beams. These women were sentinels of sturdy oak, unyielding to any ax. They showed me strength without sharpness, modeled the kind of confidence I never thought possible: One that finds its footing not in the boxer’s stance, the crouch before the pounce that my father taught me, but in standing, without fear, on solid ground. I watched these women lead meetings and lead armies, breathe meaning into their lives through art and work; I watched them love their partners and their children boldly, and I saw that love can challenge and inspire. Love can be brave.

Sometimes, these epiphanies come with stingers. A quick pinch, the moment of waking from a sweet dream into a cold morning: This strength is not in my blood. I cannot find my future in the woman who sang “Somewhere Over the Rainbow” in a voice that quivered just enough to undermine its beauty. This woman, the woman who gave me my face, will never tell me she’s sorry she let me suffer so much. That if she could do it all over again, she’d stand up for me.

There is no over again. There is only now, and now is the continued unspooling of my grief. I became my own champion, the kind of woman who would protect any child with a burning back and an ache between her legs. I will never speak in my mother’s voice; I will never pour sugar packets into a mouth full of blood. Cleaving away any attachment to my mother might not sound like any kind of loss—and often, it’s not. There are moments, though—when I see those photos of my friends with their children, and I know that a motherlove that is sweet and solemn, attentive and protective is possible, even natural—that I feel cut clean to the bone. Denying a birthright of willful blindness and violence will always be the right choice, the only choice. But with that denial, I became a daughter in name only.