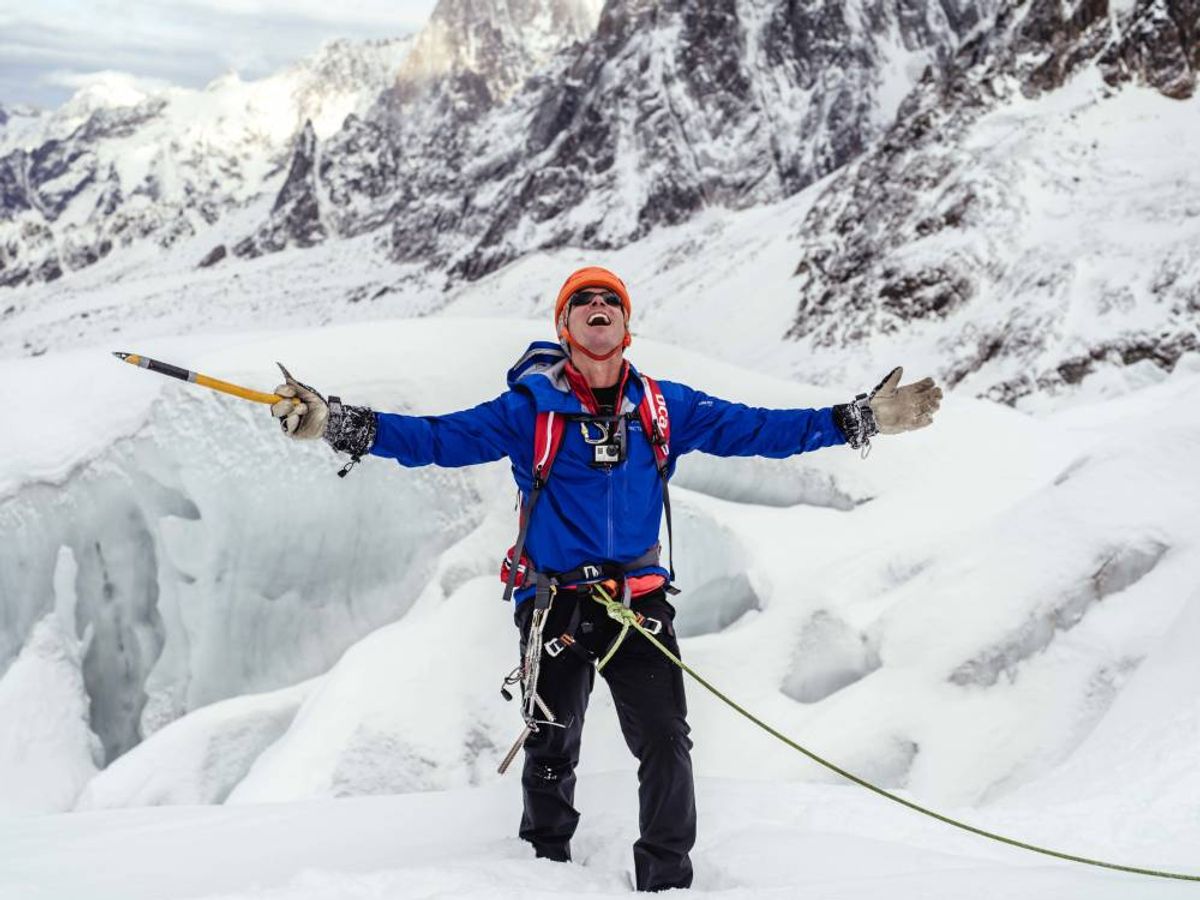 Bill Weir is passionate about climate change. A bit too passionate, at times, for a CNN anchor, as he learned last summer when he fired off a vulgar -- if justified -- tweet at Fox Nation over its climate trolling.

Fortunately, the network has given Weir a better outlet for his frustrations, sending him on a whirlwind trip around the world as host of "The Wonder List," an eight episode series that wraps up this Sunday. It's a show about some of the most incredible places on Earth -- from the Galapagos to the Everglades to the Greek island where people "forget to die" -- and about the change, much of it human-caused, that threatens them all.

Fittingly, the final episode takes on the biggest of those changes: man-made global warming. Weir travels to the French Alps, where he scales a retreating glacier, and to the Heartland Institute's conference in Las Vegas, where he goes head-to-head with some of the country's most vocal climate deniers. It's thrilling, to say the least.

Salon spoke with Weir about his decision to choose sides in the climate debate and about the stories he feels the media needs to be telling more of.  Our conversation, which follows, has been lightly edited for length and clarity.

So which was scarier: scaling those glaciers or going to the climate change deniers' conference?

[Laughs] They provide different kinds of thrills, I suppose. I went to that conference before the show was even green-lit, just because I'm interested in this story. I didn't know where it was going to fit, but once we got to the Alps and we were really getting into climate change, it seemed like the best contrast.

Yeah, it's amazing. I've always said that in these big-budget disaster films, where there's a meteorite hurtling toward Earth and Bruce Willis needs to save humanity, they always cut to the concerned citizens huddled around TVs around the world, all buying into that idea. They never show the guy who doesn't believe it's coming. As all the science pours in, it was just really intriguing to me to try to figure out how these guys think around that evidence.

There's a lot of debate right now about whether the media should be giving a platform to climate deniers at all. Did you have any reservations about including those opinions and arguments?

As is the case with any big story, at a certain point, the last reporter stops saying, "Some doctors insist that cigarettes don't cause cancer." At a certain point, that part of the debate sort of fades away, but in this case, it's so intractable. I think it would be much easier to ignore the naysayers if half of the U.S. Senate didn't agree with them.

You hear some people say that the debate is over and we should move on entirely. And you see some signs of that: There was a guy from the Heartland Institute who wrote a column back in January; Dana Milbank just wrote about it. I just read the piece, and it's not as much of a cave as Milbank would like it to be. You do see people coming around to the idea of OK, yes, it is happening -- but humans are only responsible for a tiny fraction of it. That is shifting it.

For me this was not an exercise in giving the other side a 50/50 chance to rebut this, but really to call them out on these facts and challenge them and show the argument for what it is and where it comes from, which, more often than not, is much more ideological and political than scientific.

I think the most laugh-out-loud moment for me was when John Coleman tells you there's no money on the climate denier's side; but that environmentalists are getting paid to say these things about climate change.

That billion-dollar conglomerate, Greenpeace... No, but I tell you what surprised me coming away from that conference: when Coleman and Lord Monckton say they don't get a dime from Big Oil or fossil fuel lobbies, I kind of believe them. I think, at a certain point, those people realize, we don't have to pay these guys. These guys are true believers, these guys wake up with their minds made up and are so fired up about the issue that they'll evangelize that point of view for free. As it gets trickier to align yourself with that idea, they don't have to get sucked into those allegations and they can distance themselves. Of course, they have lobbyists in Washington who are essentially spreading the same messages, but it's much more low-key, I think.

Do you think there's still a lot of room in the media to be telling these stories, like you do in the series, about how human activity is influencing the world around us?

God, yes, absolutely! That's why, when my boss said, maybe you should just do a taped series and go around the world and come back with some good stories, I knew immediately ... I don't know if it's just my goofy upbringing or whatnot, but I tend to have this premature nostalgia about stuff; when I'm in the woods with my daughter, I think about how fast it can all go away if we're not careful. There was a deliberate decision to hire the best filmmaker I could find [Philip Bloom] and go to the most amazing places and try to remind people to fall in love with this planet, as we know it today. That gets people in the tent much more so than coming from a pulpit, preaching about the evils of development or whatnot. I mean, it is what it is; we live on a crowded planet and we all have lifestyles we're fond of, so how do we keep both? If you look at what's happening in California with the drought, what's happening with the Gulf Stream as Greenland melts, this is the story as far as I'm concerned.

Was there a place that had the biggest effect on you, personally?

Israel was interesting because I went there thinking that World War III is probably going to be started over water and realized that water may be the only path to peace they have; that's the only thing desert communities can agree on. I came away from the Middle East, ironically, with a lot more hope than from other places. But then you go to India and you realize that there are just a few thousand tigers left in the wild and that in order for them to survive and thrive, we've got to get 400 million people indoor plumbing so they don't get bitten when they go out into the woods every morning. You think, that's impossible -- there's just not enough time and space to feed all those mouths and power all those lives and still maintain wildlife.

So each place was different, but I really believe the Alps episode was my favorite. I got to climb a glacier for the first time, which is a thrill, but also just to remind everybody that all the other conservation efforts are moot if we don't address this one. Saving tigers will be a naïve novelty in 50 years if the sea levels come up 3 feet, you know? I'm really proud of the chance to get to tell the story from that angle, and I'm grateful to CNN for actually letting me take a side in this.

How much time did you spend thinking about how you wanted to represent climate change, how strong of a stance you wanted to take? I know you've spoken out in the past about the media misrepresenting climate change -- like with that tweet to Fox Nation— but I'm guessing your philosophy has evolved over time about how to approach these issues?

[Laughs] That was a good lesson in choice of tweet... I regret the language in that, obviously.

I could understand the sentiment, that anger behind it.

I appreciate that. It was a heat-of-the-moment burst of passion, but that passion comes from hanging out with a lot of scientists who firmly believe that passion and science don't mix, that the message has to be measured and you can't get emotional when you're studying data. Maybe just hanging out with guys like that over the years covering this beat, I see their predictions and they're really grim, and it becomes exasperating when people are still stuck on whether or not it's really happening or what to label the other side. I wrote about this in my Reporter's Notebook on our Web page: people are still arguing over whether you should call them deniers or denialists or skeptics, while they call everyone else alarmists or warmists... While we're arguing about that stuff, the glaciers are melting!

Seven billion people on this planet can change the chemistry of the atmosphere and the oceans. You're familiar with the meme, I'm sure, that our best science tells us that the Earth is 4.6 billion years old, which is too big of a number to wrap our heads around, but if you scale that down to my age, 46 years, human beings showed up four months ago and the Industrial Revolution was a minute ago. In that blink of time, we have cut down half the forests and eaten half the fish; we've dammed or diverted just about every river in the world, changed the chemistry of the sky and the oceans... I think the more people are able to take a step back and just think about things in those terms, we can fix these problems. If everybody's going in the same direction, I really believe we can fix these problems.

Do you see it as the reporter's job to be passionate about these problems?

I can't speak for other reporters; "The Wonder List" is an interesting platform because it does allow me to come out of the gate just assuming that we all agree we want to live on a planet with wild tigers or giant tortoises in the Galapagos or a Jordan River. My job as a storyteller is to point out why these things are threatened and what smart people think can be done about it. What's interesting is that I've got very conservative relatives in Texas who have told me, "All our friends at the country club love your show, but you'd better not go into that whole global warming thing because you're going to turn off a lot of people." That stance is frustrating, not only as a reporter but just as a father and as a person.

Because this particular show is such a personal voyage and I'm using my own daughter as a reference point, I may have some license here that the evening anchors don't, but I think it's just a matter of time before all of this political sniping over this topic fades away. Because reality has a way of smacking you in the back of the head, you know?