Abraham Lincoln would despise you all: Race, the South and the GOP's most delusional fantasy

Republicans call themselves party of Lincoln, then take stands on race the late president would never, ever back 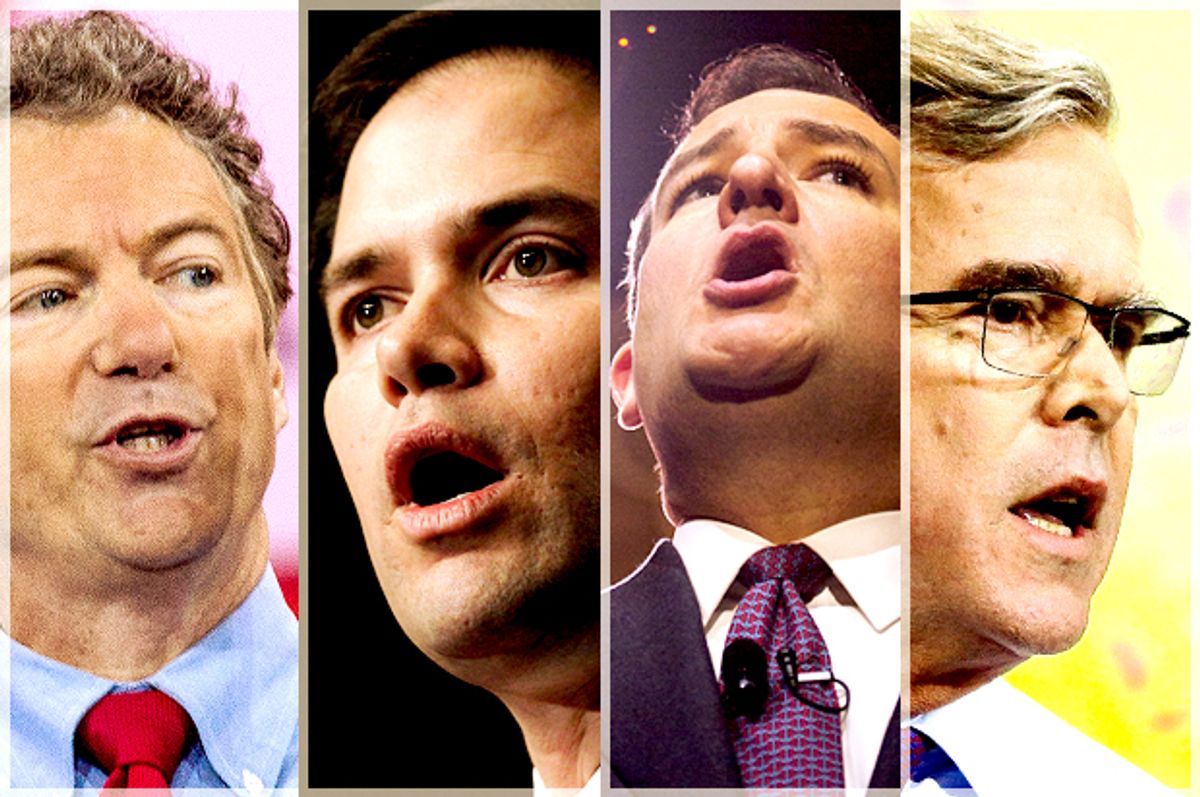 In an extraordinary amicus brief filed with the Supreme Court to oppose gay marriage, the attorney general of South Carolina recently declared that the Republican congressmen who framed the 14th Amendment intended only to prohibit discrimination against African-American men. Nothing more. Discrimination against women, people of other races and, of course, people who practice religions other than evangelical Christianity, is, according to the brief, perfectly in line with the intent of the 14th Amendment.

If you listen carefully, you can hear Abraham Lincoln rolling in his grave.

President Lincoln, and the Republican Party he helped found, fought a war against men who believed the law should discriminate against different classes of people.

At stake in Lincoln’s era was not just the future of black slavery, but also the nature of America. The Declaration of Independence said that all men are created equal, but the Founding Fathers had also permitted black slavery in the new nation. Free labor and the slave system coexisted uneasily until 1848, when the country acquired the vast West from Mexico. These lands were extensive: they would later make up California, Nevada, and Utah, and parts of New Mexico, Arizona, Colorado and Wyoming. Would they be settled by men who believed in human equality, or by men who practiced legal slavery?

Complicating the question, there were already Mexicans and American Indians living in the newly acquired regions. The California gold fields were also part of the new territory, and they immediately attracted impoverished Chinese men to America. How would these non-white peoples fit into the nation?

Facing an influx of people different from them, white men in Western state legislatures decided the question by beginning to pass laws that discriminated between different castes of people. In 1852, the California legislature established a “foreign miner’s tax,” taking about half of a Chinese miner’s income. And in 1854, it prohibited Chinese from testifying in court, taking away their access to legal protection. Chinese immigrants were no longer equal before the law. Back east, native-born Americans also began to agitate against foreigners, especially Catholic Irish immigrants. They formed the “American Party,” also dubbed the Know-Nothings, and tried to keep immigrants from citizenship. The trend escalated: in 1859, Oregon entered the Union with a clause prohibiting African-Americans from settling there.

In 1857, the Supreme Court went even further, attempting to enshrine the principle of discrimination in the nation’s fundamental law. With popular support for legal distinctions among Americans growing, the court’s southern-sympathizing chief justice decided to define who could be a member of the American nation. In the Dred Scott decision, the Supreme Court approved legal distinctions among men. It declared that African Americans were not citizens, and that they had “no rights which the white man was bound to respect.”

The establishment of different castes of Americans reflected a larger redefinition of American society. Southern slave owners defended inequality as the proper form of American life. In Congress, South Carolina Sen. James Henry Hammond explained that most men were drudges: stupid, unskilled workers who were strong, docile, and loyal to their betters. Members of this “mudsill” class — the derogatory name he coined for America’s slaves and wage earners -- were dumb enough to be happy where they were, and would never rise. Atop this “mudsill,” according to the senator, rested higher civilization — those gentlemen who led “progress, civilization, and refinement,” — men like him, who should control society.

Plenty of Americans were willing to buy into this version of society, so long as it meant there was someone below them. Sen. Stephen A. Douglas, one of the most prominent Democrats of his day, ridiculed the idea that all men in America should have equal rights before the law. “This government… was made by white men for the benefit of white men,” he said. Crowds of white men responded with cheers.

But men like Abraham Lincoln opposed this new, caste vision of America. If slavery depended on skin color, he mused, then any man could be enslaved to a man with lighter skin than him. If it was based on intelligence, then any man was inferior to a man with a better intellect. Lincoln saw where this argument led. “Say you, it is a question of interest; and, if you can make it your interest, you have the right to enslave another. Very well. And if he can make it his interest, he has the right to enslave you.” He spelled out what this idea of different legal castes meant for the country in an 1855 letter to his friend Joshua Speed. “Our progress in degeneracy appears to me to be pretty rapid,” he wrote. “As a nation, we began by declaring that “all men are created equal.” We now practically read it “all men are created equal, except negroes.” When the Know-Nothings get control, it will read “all men are created equal, except negroes, and foreigners, and catholics.” When it comes to this,” Lincoln concluded, “I should prefer emigrating to some country where they make no pretence of loving liberty---to Russia, for instance, where despotism can be taken pure, and without the base alloy of hypocracy.”

Publicly, he stood firm on the argument he had privately made to Speed. Americans must stand equal before the law. “I should like to know,” he mused in response to Douglas’ insistence that the government should belong to white man alone, “taking this old Declaration of Independence, which declares that all men are equal upon principle, and making exceptions to it, where will it stop? If one man says it does not mean a negro, why may not another man say it does not mean another man?”

Few native-born Americans cared about the fate of black slaves or Chinese immigrants, but many found it a matter of grave concern to hear southern planters begin to define wage earners like themselves as a permanent underclass that had no right to legal protection. Either the nation was one in which every man had an equal right to make what he could of himself, or it was one in which the government, through discriminatory laws, determined a man’s fate. In America, they insisted, every man had a right to decide his own destiny.

These men who thought like Lincoln organized the Republican Party to oppose the legal establishment of different categories of people. They fought to guarantee that America would remain a land of equal opportunity. “Four score and seven years ago,” Lincoln reminded Americans in 1863, “our fathers brought forth on this continent, a new nation, conceived in Liberty, and dedicated to the proposition that all men are created equal.” In 1865, when the Republican Congress passed the 13th Amendment to the Constitution and sent it off to the states for ratification, it seemed they had finally established that the law would not discriminate between different Americans. Lincoln called it “a King’s cure for all evils.”

But they were wrong. Ending legal slavery did not end the idea of castes. After the Civil War, white legislatures in the former Confederate states made it illegal for freed people to own property, own guns, and walk the streets as white people did. They also prohibited ex-slaves from suing, testifying in court, and sitting on juries. African Americans were no longer slaves, but they were not equal before the law.

To kill the idea of legal castes once and for all, Republicans in Congress passed the Civil Rights Act of 1866, declaring that, with the exception of certain Indians, “all persons born in the United States” were citizens entitled to “full and equal benefit of the laws,” notwithstanding any law, statute, ordinance, regulation or custom to the contrary.

President Johnson vetoed this law, expressing his astonishment at its extraordinary declaration. Surely “the Chinese of the Pacific States, Indians subject to taxation, the people called Gipsies, as well as the entire race designated as blacks, people of color, negroes, mulattoes, and persons of African blood,” were not equal to white people, he wrote in his veto message. Republicans answered him definitively. They overrode his veto and put the exact same language that had appalled Johnson into the 14th Amendment.

President Lincoln was murdered by a Southerner who insisted that America was a country for white men only. But when Lincoln breathed his last at 7:22 on the morning of April 15, 1865—150 years ago this week-- he had not simply helped to end slavery. He had given his life for a nation finally dedicated to the proposition that all men are created equal.